The American Association of Physics Teachers is a national organization composed of high school and college-level physics instructors to share ways to advance physics through education. Warble is currently a teacher-in-residence at ASU’s Department of Physics. Since becoming a member of the association, Warble has worked on initiatives such as the Step Up project, which encourages young women to go into physics education. In addition, she co-designed the Master Teacher Policy Fellowship, which brings physics teachers from around the country to Washington, D.C., to advocate for physics education in their home states. 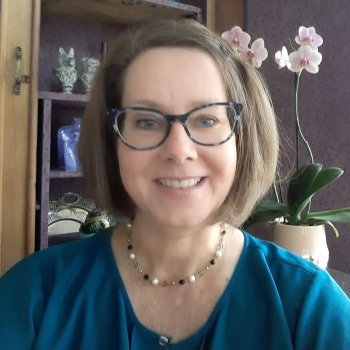 Warble feels she was selected for the position due to all of her activities, but she thanks the department for support.

“All of it probably started with the support of the ASU physics department early in my career that got me involved in these kinds of activities. So it all really originates here, from the support that I get from ASU physics,” she said.

Warble feels that the pandemic has resulted in a lot of turmoil in education, and she wants to work toward a solution as the association's vice president.

“When I talk to my fellow physics teachers from throughout the country, we don't necessarily want to return to normal after the pandemic because normal, unfortunately, in physics, we don't have inclusiveness and representation from a lot of students,” Warble said. “So, there's a lot of students that are filtered out of getting a physics education, and so we're looking forward to how can we leverage some of the things we learned from the pandemic to get a wider cross section of students to have a high-quality physics education available to them in their area, which is not an easy task.”

Warble said these are difficult challenges up ahead but that she looks forward to tackling them.

“These are sticky problems, the path is uncertain and the solutions are non-trivial. But I know my fellow teachers and colleagues in the AAPT and have been amazed again and again by what we can achieve when we work together as a community,” Warble wrote in her vice president election candidacy bio.

“We benefit immensely in the department from having Kelli around to help us expand our reach. We look forward to seeing what she does next. The American Association for Physics Teachers plays an important role, and Kelli will help the organization succeed,” Rankin said.

Editor's note: This story is part of a series of profiles of notable fall 2021 graduates.For a long time, Jordan Spurgeon didn’t watch anything except sports on television.It started in the seventh grade when his uncle introduced him to SportsCenter on ESPN, which stoked his love for sports and set him on a path towards graduating with his bachelor’s degree in sports journalism, which he ...

For a long time, Jordan Spurgeon didn’t watch anything except sports on television. 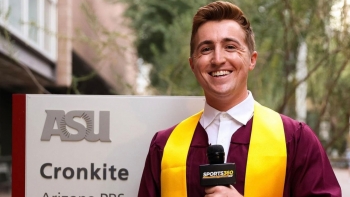 It started in the seventh grade when his uncle introduced him to SportsCenter on ESPN, which stoked his love for sports and set him on a path towards graduating with his bachelor’s degree in sports journalism, which he will accomplish this month.

Spurgeon began taking broadcast journalism classes at Palomar College, near San Diego, before transferring to ASU, where he got involved in as many organizations as he could during his five semesters here. He was the station manager at Blaze Radio, an in-game host for Sun Devil Athletics, a member of the innovation squad with Cronkite News, managed social media for the Phoenix Suns and Arizona Coyotes games for Bally Sports Arizona, and worked full-time at Sports360AZ.

Although Spurgeon doesn’t watch as many sports on television as he used to, his passion for telling compelling stories hasn’t waned.

“I want to tell athletes’ stories about their off the field life,” Spurgeon said. “There’s more to sports journalism than covering games and listing off stats. Athletes are people just like us and their struggles and stories are worth telling.”

Spurgeon has already worked on projects that reflect his focus including a video story with Halle Harger, a softball player at ASU who shared her experience with cancer, and a documentary on Zach Hoffpauir, a former baseball and football player who passed away last year.

Spurgeon started his own radio show called “The Spurge” during his time at Palomar College, which he continued here at ASU. The show won the IBS Golden Mic award this year for being the best sports talk program in the country. Spurgeon also won a Rocky Mountain Emmy Award this year for his Cronkite News story, “The Seated Golfer,” on a golfer who golfs from his wheelchair. In addition, Blaze Radio won an award for the best streaming station in the nation during his time as its station manager.

Question: What was your “aha” moment when you realized you wanted to study sports journalism?

Answer: My “aha” moment was in the seventh grade. I was sitting on the couch and my uncle Mike came to visit and I turned on SportsCenter and I think I watched it for like a week straight. I already really liked baseball and football at the time. And I pretty much never watched cartoons for the most part again, and it was always on in my house. I was an early riser as a kid. So I would wake up at like 5 a.m. and first thing, go on ESPN and that was when I kind of knew I wanted to do it. And as I grew up and became less shy, by the time I reached high school, I knew this was it.

A: I had a couple professors and even my boss tell me that I should watch less sports. You think if you’re in sports journalism, you got to watch all these sports. And I'm glad they told me that. There were times where I was feeling burnt out, because I'm like, “Oh, I gotta watch this game. ” But now I don't watch that much sports but I can cover it extremely well because of the skills that I've been able to learn at Cronkite. And I think that's the biggest piece of advice I've learned and because of that, my mental health is a little better without having to worry about watching all these sports all the time.

A: I chose Arizona State because I had two friends at community college transferring to ASU. And once I knew that, I went home that day from class and looked up the program at the Cronkite School. I was like, “Yeah, that sounds like a great opportunity.” And I knew I was doing really good hands-on stuff at community college, so I would fit in well at ASU. It was, you know, far from home, but not really far from home. So it was just a perfect match for me.

A: Jane Lee was my professor for sports journalism reporting. And she made me a better writer. She challenged me to get in-depth and get all the details and make my stories more interesting for people to read. And that stuck with me, because every time I tell a story, I'm always looking for an angle that nobody else knows about or that no one's talking about.

A: Try everything that you think you could be interested in, even if you don't think it's what you want to do. Eventually, you'll get to a point where you figure out what it is you want to actually do. But the more skills you have in your bag, and the more things you try and experience, the more you'll be able to kind of navigate this crazy world we live in, especially in journalism. And you'll meet a lot more people when you try everything.

A: Definitely room 320 in Cronkite because that's where Blaze Radio is at. So I spent a lot of time in there just chatting with people in the edit bays and hanging out around the studio to see what awesome music or shows are on.

A: I'm going to continue working at Sports360az, and building myself up from there.

A: I'm a certified personal trainer, so I might spend that money on people having more education on eating better food and giving access to better food for everybody. I think that's something that a lot of people overlook. I guess that could be attached to solving world hunger.