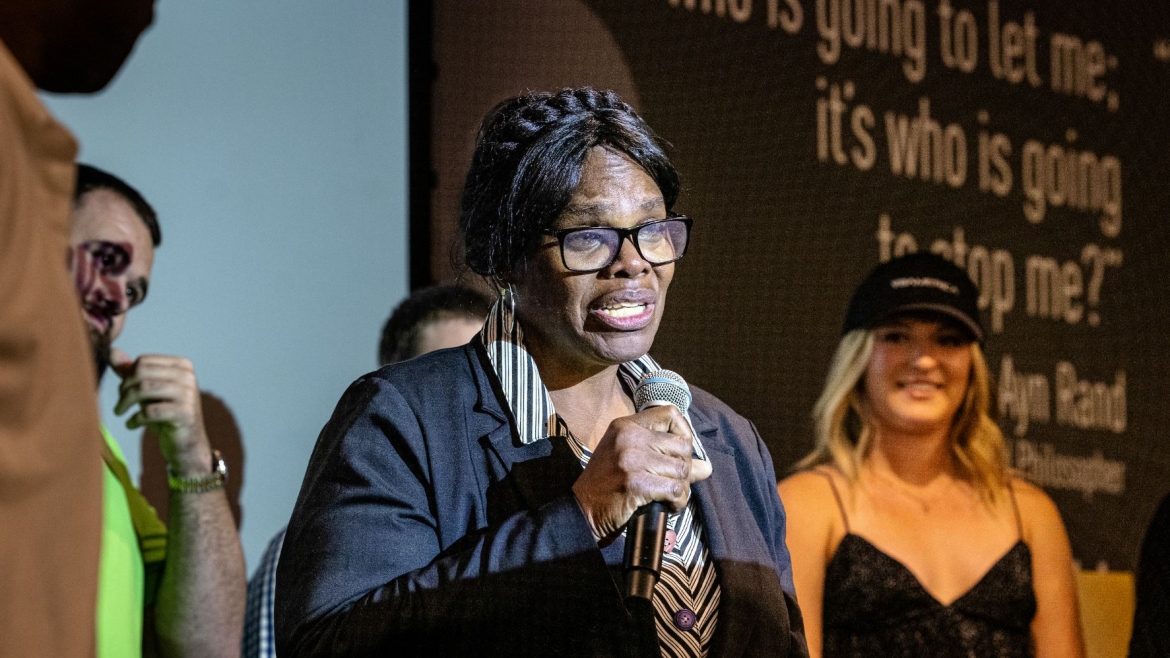 Entrepreneurship is all about solving problems, and Arizona State University student Jordan Fourcher won $15,000 on Friday for his solution to a common problem in Arizona — overheated mobile phones.

Fourcher, who is majoring in technological entrepreneurship and management, won the funding in the Edson Student Entrepreneurship Initiative at the Demo Day pitch event.

His company, Fourcher Technologies — which previously won $15,000 at the spring Demo Day — specializes in thermal-management solutions for mobile electronics.

“How many of you ever had your phones overheat? I thought, ‘How do we fix that?’” he asked the crowd during the awards celebration at SkySong on Friday night.

“Right now I’m working on a wireless charger that actively cools your phone, and I’m also working on a phone case that gets colder without electricity.”

Fourcher Technologies was one of more than 75 Venture Devils startups that pitched at Demo Day on Friday. Venture Devils is a program to support ASU students, staff, faculty, alumni and community entrepreneurs within the J. Orin Edson Entrepreneurship + Innovation Institute at ASU. More than $192,000 was awarded in eight funding tracks. Venture Devils teams also get access to mentorship and space.

Demo Day is held every semester on the last day of classes, and Friday’s pitch event was the first to be in person since fall 2019 — although the awards event also was livestreamed. Fourcher was among many Venture Devils founders who were pitching in person to judges and an audience for the first time instead of submitting a pitch video.

“When I first walked into the building, I told the judges I wasn’t nervous, I was ecstatic,” he said. “I felt like I was at Disneyland!”

Overall, $90,000 was awarded to sports-related ventures.

Charlotte Bowens wept tears of joy when her name was announced for winning $10,000 in the Global Sport Institute Venture Challenge. Bowens founded Conscious Gear, a line of outdoor-activity clothing for larger-sized people.

“My business is really my passion,” said Bowens, a graduate student in the Innovation and Venture Development degree program and a staff member at ASU.

“It’s really about ensuring that bigger-bodied folk can be in the outdoor space and have the outerwear and gear that they need to be endurance athletes or just get out onto the hiking trails.”

The top winner in the Global Sport Institute funding track was Timeout, an app created by Maya McClendon, a star on the Sun Devils volleyball team before she graduated in 2017. She won $15,000 for the app, which creates a personalized mental health program for athletes and connects them to resources.

Also winning funding was Get Gifted, a venture co-founded by MBA student Michael Matus, who plays football for the Sun Devils. The app connects student-athletes to local businesses for brand deals, now allowed under the new Name, Image and Likeness policy by the NCAA. Get Gifted won $5,000.

There were two new funding tracks this semester: Venture Devils Pay It Forward and the Arizona Coyotes Venture Challenge. 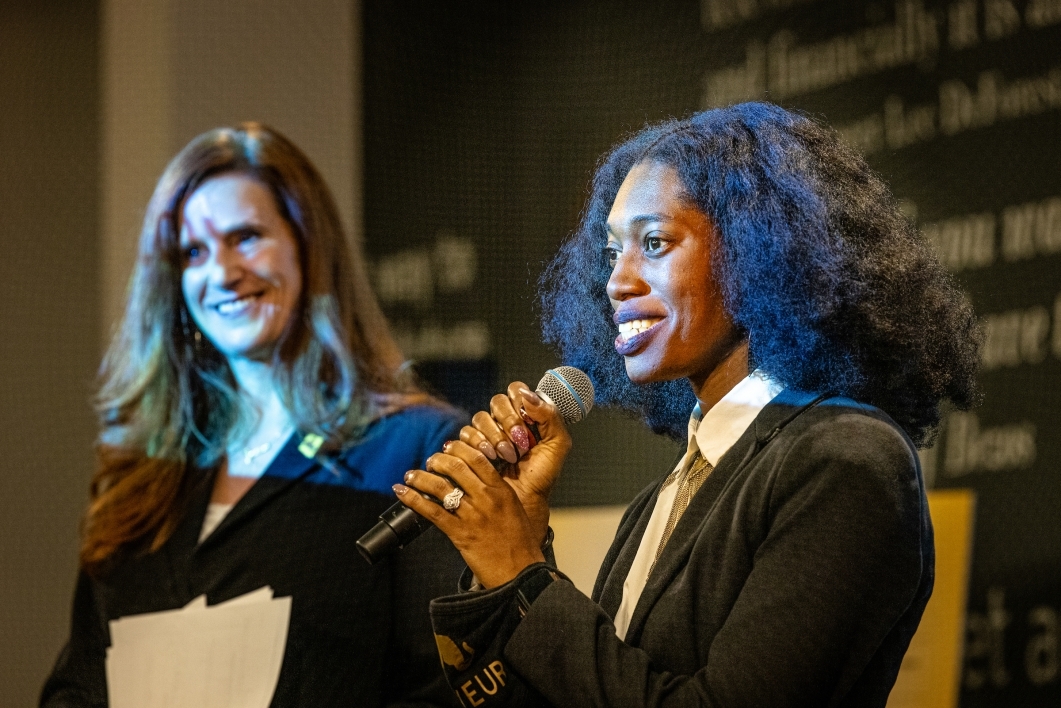 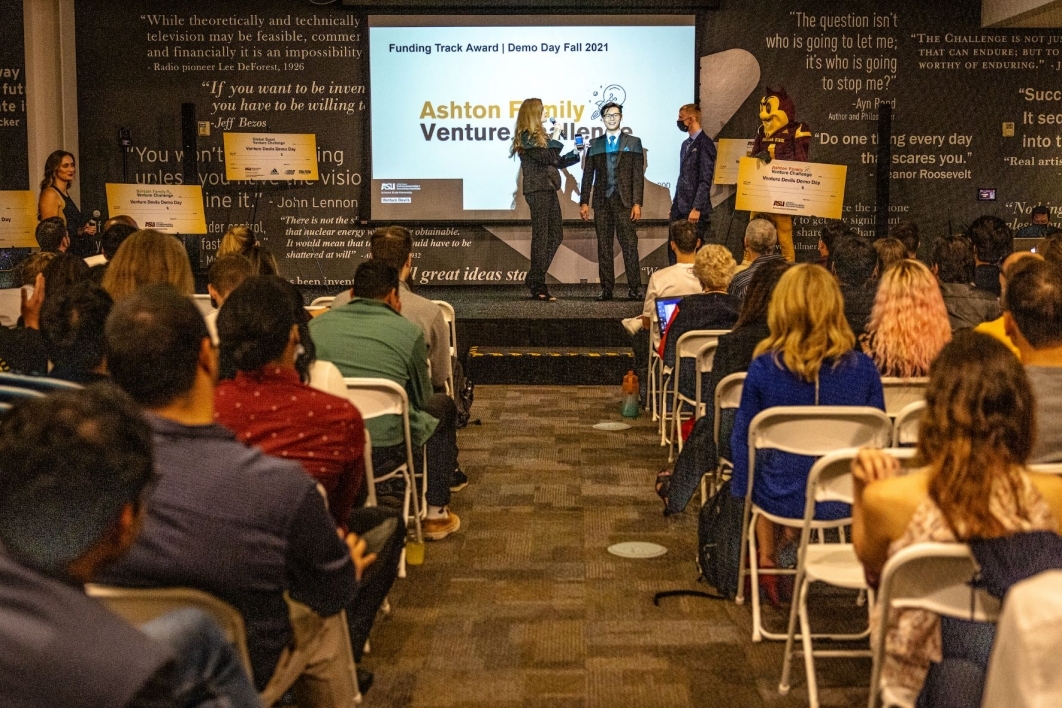 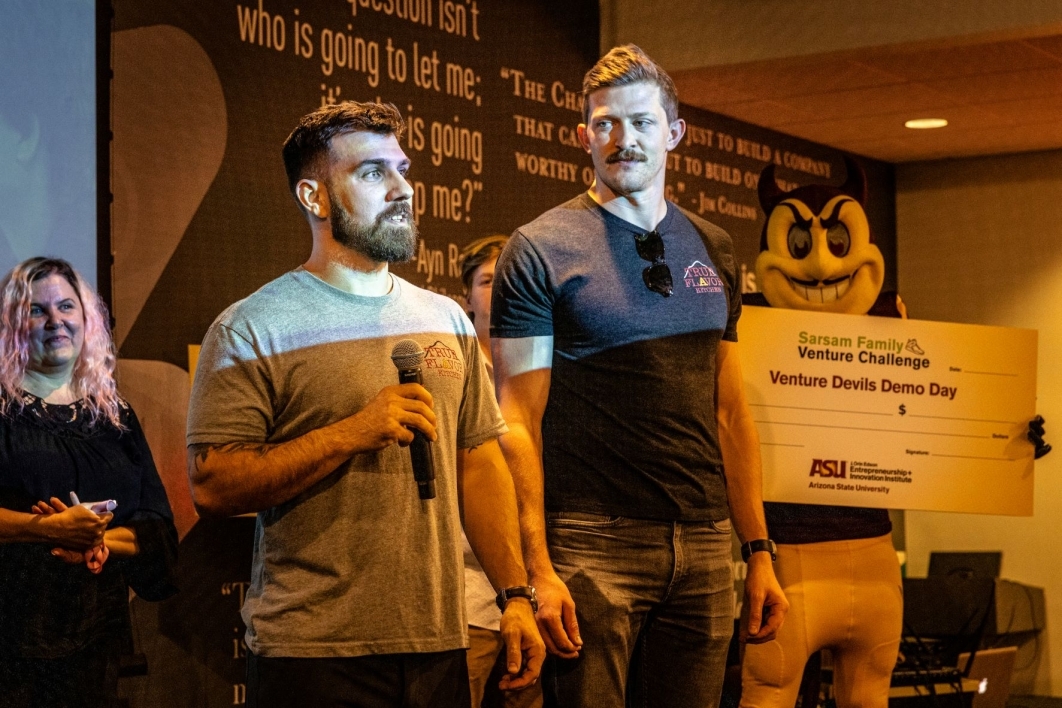 Venture Devils Pay It Forward awarded $20,000, with $10,000 coming from Mat Sherman, a 2016 ASU alum. His donation was matched by the Edson Entrepreneurship + Innovation Institute.

“I never thought I would be in this position of not accepting a check but giving a check,” said Sherman, who won funding at Demo Day three years ago for his startup Publoft.

“I think there’s an important obligation for founders who get money at Venture Devils that build important companies to stay in Arizona and to give money to programs that build the ecosystem.”

Twelve ventures pitched to team executives in the Arizona Coyotes Venture Challenge on Thursday, and the winners were announced at the awards ceremony Friday night. Xavier Gutierrez, president and CEO of the Coyotes, appeared via Zoom from his suite at Gila River Arena in Glendale right before game time.

“I’m really excited about this effort to partner with ASU and the Global Sport Institute, and this was very exciting for us,” Gutierrez said. “A key part of our business plan is around innovation and being top-of-mind and best-in-class partners for entrepreneurs.”

The winning ventures were Suji, a Scotland-based venture that makes a compression-training system, which won $30,000; Train Fitness AI, a Canadian venture that created a rep-counting app for Apple Watches, which won $20,000; and Adapt the Game, an app to improve the game-day experience for fans with disabilities, developed by Victor Ocando, a Tempe resident who uses a wheelchair and participates in Devils Adapt. Adapt the Game won $10,000.

Other funding winners were:

Top photo: Charlotte Bowens cried tears of joy after she won $10,000 for her startup Concious Gear, which makes outdoor apparel for larger-sized people. Bowens is a graduate student and a staff member at ASU and won the investment at Demo Day, held Friday at SkySong and sponsored by the J. Orin Edson Entrepreneurship + Innovation Institute at ASU. Photo by Charlie Leight/ASU News

Ranging from Captain Ahab in search of a white whale to Captain Jack Aubrey aboard the HMS Surprise, even two centuries later there continues to be interest in the microcosms of ships during the Age of Sail.Arizona State University Foundation Professor Michael Hechter and Steven Pfaff, professor of sociology at the University of Washington, take a look at this time period in their book "The Genes...

Ranging from Captain Ahab in search of a white whale to Captain Jack Aubrey aboard the HMS Surprise, even two centuries later there continues to be interest in the microcosms of ships during the Age of Sail.

Arizona State University Foundation Professor Michael Hechter and Steven Pfaff, professor of sociology at the University of Washington, take a look at this time period in their book "The Genesis of Rebellion: Governance, Grievance, and Mutiny in the Age of Sail." 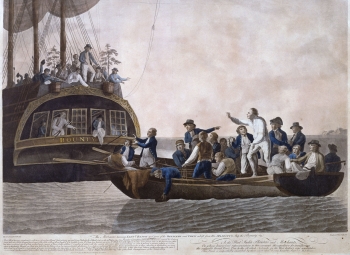 "The Mutineers turning Lieut Bligh and part of the Officers and Crew adrift from His Majesty's Ship the Bounty" (29 April 1789) from the Royal Museums Greenwich. Download Full Image

The Social Science History Association recently awarded their book the Allan Sharlin Memorial Book Award for 2021, which is given annually to an outstanding book in social science history to honor the memory of Allan Sharlin.

"The Genesis of Rebellion" explores mutiny, collective action and governance of seamen from 1740 to 1820. Using both quantitative and narrative evidence, the authors were able to determine the factors that led to mutiny. They were able to do this because they created a dataset from Royal Navy records of the 64 ships that had full mutinies in this period along with a sample of other ships that did not. Their findings help us to understand the emergence of rebellion more generally.

Hechter, who is part of ASU’s School of Politics and Global Studies, spoke with ASU News about his award-winning book.

Question: What inspired you to explore historical mutinies in the British Royal Navy from a social science lens?

Answer: The idea for this book was born in 1996 in Oxford. As a fellow of New College living in college, I routinely dined at High Table. Like many things at Oxford, High Table has its own ritual. Shortly before the meal, participants gather in the Senior Common Room and then walk into Hall to be seated in a random order. Once seated, the norm at the very long table is to converse with the people both on one’s right and left.

That evening there was a strange face to my right, and I struck up a conversation with him. It turned out that this individual was a postgraduate student in naval history pursuing his DPhil. He was grousing about the long and tedious day he had just spent at the Public Records Office (now the National Archives). I was curious about the nature of the naval records to be found there. The student mentioned that the PRO had records of every sailor who had ever been on every ship since the founding of the Royal Navy in the 17th century. Whereas there is a good deal of information about organizations in the historical record, ordinarily there is very little that identifies every individual in a given organization, especially over the longue duréeFrench for "long duration" or "long term," an approach to history writing.. I immediately realized that this kind of evidence could be marshaled to create an innovative study of collective action — and of mutiny, in particular.

Q: How did governance during the Age of Sail create the kinds of grievances that led to rebellion?

A: Normal life in the navy in that era was no walk in the park. The ships were very crowded, flogging was frequent and living conditions were so bad that Samuel Johnson famously claimed that being a sailor was a far worse fate than being in prison. Despite this, however, sailors, who had a strong occupational culture, expected to be subject to these difficult conditions and usually accepted them without protest. At the same time, however, they expected their officers to provide ample provisions and grog and generally ensure the safety of the ship and the welfare of the crew. Mutiny was most likely to break out when incidental — unanticipated — events befell the ship for which the officers could be blamed. And the principal cause of mutiny, to our surprise, turned out to be a high incidence of sickness. The sailors attributed these incidental grievances to the poor governance of their captains and warrant officers.

Q: Were mutinies by seaman successful in creating social and structural change in the navy?

A: Mutinies repeatedly revealed problems of governance in the navy. Beyond repression and the redress of specific grievances, sympathetic naval officers, public officials and moral reformers sometimes responded to mutiny by advocating for improvements in naval governance and seamen’s welfare. The connection between mutiny and reform is not always straightforward, however, because the navy was a fundamentally conservative institution in which resistance even to obviously beneficial reforms could be dogged. As one naval historian noted of many necessary reforms, “Every change was grudgingly accepted and sometimes dangerously delayed.” Nevertheless, mutinies inspired reforms in the domains of pay, discipline and punishment, and health and welfare.

Q: Do you think that the mutinies of that time influenced other parts of Western society, or was it restricted to the British Royal Navy?

A: The most dramatic mutinies — like those on the Bounty and Hermione — were well-known the world over and often attributed to a revolutionary spirit that had developed after the American and French revolutions.

Q: How might we apply takeaways from mutinies during the Age of Sail to rebellions that occur today?

A: The genesis of rebellion hinges on the degree to which grievances are shared and considered to be ameliorable. If so, then authorities are at least partly responsible, and thus they should be held accountable for redressing the sources of these grievances. Discontent motivates rebellion when people believe that the authorities should be competent and effective and willing to assist or protect them, but that they have fallen short. The greater the dependence of people on rulers for their well-being, the more they will expect them to be at least minimally concerned with their security and welfare, to be responsive in times of crisis or emergency and to govern in ways that are culturally appropriate.