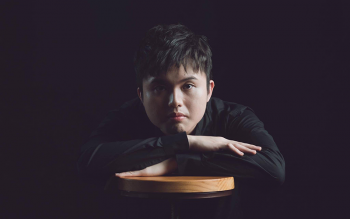 Chan, an international student from Macao, earned his Bachelor of Music in piano performance in 2017 at ASU, where he studied under Baruch Meir, associate professor in the School of Music, Dance and Theatre. After completing his Master of Music degree at Texas Christian University, Chan returned to ASU to complete his doctoral studies.

“Despite the pandemic and having to take all online lessons from Macao for over one year, Tommy has made great achievements in his career,” Meir said.

Chan said, “I had doubts on whether the online lesson could offer the same experience as in-person instruction. Even though the sound delivery cannot achieve the same quality as in-person instruction, Dr. Meir offered me an excellent experience with online piano lessons. I learned a lot on many musical aspects and interpretations on piano playing.”

Since 2013, Chan has been sponsored by the Cultural Affairs Bureau in Macao for his studies abroad and has received numerous distinguished scholarships and awards. He has participated in master classes and international festivals such as the Schlern International Music Festival in Italy and the White Nights International Piano Festival in Russia.

Chan began his musical studies at the age of 7. In 2007 and 2008, he studied with Jun Yang, a former chair from the Central Conservatory of Music in Beijing. He won first prize in the China Guangzhou National Piano Competition at age 12 and made his first concerto debut with an orchestra at 14, playing the “Yellow River” Piano Concerto. The same year, he was accepted into the pre-college program of Escola de Musica do Conservatorio de Macau (Macao Conservatory School of Music).

“I selected ASU to pursue my music studies because of the distinguished music faculty and the first-rate facilities,” Chan said. “Like most performance majors, I select a school based on the teacher and am fortunate to have studied with Dr. Meir for my undergraduate degree and now my current graduate degree. The one-on-one experience has influenced me artistically, musically, pianistically and in many other ways so that I grow to be a better musician and pianist.”

Meir said since international competitions attract students from all over the world, they often require a higher performance level. In the United States, he said he considers the Music Teachers National Association competition a very strong competition because it represents major teachers and schools from around the nation.

“Students should take competitions as part of their learning experience and as a motivator for personal growth,” Meir said. “Competitions can be a steppingstone forward, but you need to be careful not to let it affect you negatively in case you don’t win. Use it as a source for motivation.”

Chan said the best advice he would give to students interested in competing is to not hesitate to participate in any musical event or competition once you feel you want to be a part of it.

“No single award or prize can speak for you as an artist, but the process and experience are invaluable,” Chan said.

The Evolution Education Award recognizes innovative educators who “promote the accurate understanding of biological evolution.” Only one award is administered each year, alternating annually between educators in higher education and K–12. The award is sponsored by the National Center for Science Education and the Biological Sciences Curriculum Study. 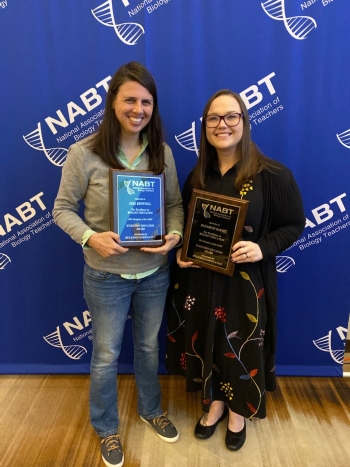 This award recognizes Barnes’ thesis that was conducted with her adviser, Brownell.

Their shared work advocates for a “call to use cultural competence” when teaching evolution, a core principle of biology that can present a difficult obstacle for some students.

Brownell and Barnes have found that there are many simple strategies that can be used by educators to help students reduce perceived conflict between their religious beliefs and the teachings of biological evolution.

“Many students have misconceptions that one has to be an atheist to accept evolution, which means that we need to do a better job at highlighting that science is actually agnostic with respect to whether there is a God because it is outside of the bounds of science,” Brownell said.

Another technique is to include examples of notable scientists who also practice a religious faith in the coursework.

A prominent example is Francis Collins, who served as director of the National Institutes of Health and helped oversee the human genome project. Collins is a geneticist and a faithful Christian. He also founded BioLogos, an organization that promotes discussion between Christians and scientists about evolution.

Educators who hold religious beliefs and teach biology are encouraged to share this facet of their identity with their students.

Studies conducted by Brownell and Barnes have shown a cultural disconnect at the college level between educators, who are mostly secular, and a large majority of students who define themselves as religious.

Inclusive representation and strong role models can provide valuable support for students who may worry their religious identity excludes them from a path in STEM.

Educators like Barnes and Brownell are working to increase dialogue about this social stigma in the classrooms, and this award reflects the work they have accomplished to spark discussion and use culturally competent education at the college level.

"Much of our work is showing that the perception of conflict between religion and evolution is greater than the reality of conflict,” Barnes said. “However, students are often only exposed to how science and religion can conflict and are not given the opportunity to see the many ways in which they can coexist peacefully.

“If we are going to increase trust in science and scientists among the public and our students, then we argue that scientists will need to start finding ways to communicate how religion and science can coexist. I think our award reflects that the scientific community is starting to recognize this as well."