Contrary to what many may think, the Intercollegiate Ethics Bowl is different than debate competitions, said Richa Venkatraman, who as a student competed in Ethics Bowl events requiring her to analyze and discuss ethical solutions for real-world problems.

Venkatraman, now in her second year studying for a master’s degree in biology and society, participated in Ethics Bowl throughout her four years as an undergraduate student in Barrett, The Honors College at Arizona State University. She has been assistant coach for the ASU Ethics Bowl team for two years, under the direction of Barrett, The Honors College Faculty Chair and Honors Faculty Fellow Jenny Brian. 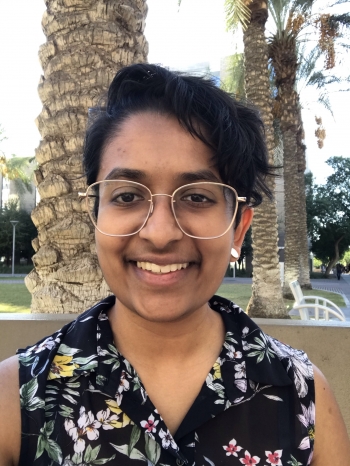 Richa Venkatraman was a member of the ASU Ethics Bowl team as an honors undergraduate. She is now a graduate student and assistant coach of the team. Download Full Image

Brian said the Intercollegiate Ethics Bowl competition, presented by the Association of Practical and Professional Ethics, brings together students from all over the country to deliberate solutions to complex ethical dilemmas.

“Ethics Bowl teaches students how to engage in reasonable dialogue where they’re giving thoughtful assessment to their positions about what a just society is, what is ethical, and the world they want to live in,” Brian said.

The ASU Ethics Bowl team, which is sponsored by the School for the Future of Innovation in Society, will compete in the California Regional Ethics Bowl competition being held online Dec. 4.

“One thing I like about Ethics Bowl is that it's less adversarial than debate,” Venkatraman said. “We're not interested in proving the other team wrong; we're more interested in having a conversation, building off each other and thinking together about how we can solve the problems we're faced with. It feels much more welcoming and less intense than debate.”

Another thing she likes is that ASU’s Ethics Bowl team is open to any undergraduate, of any major, with any level of experience with ethics and philosophy. Students can take the class FIS 394: Ethics Bowl for one to three credits or join the group as an extracurricular activity.

“Ethics is for everyone!” Venkatraman said. “Ethics Bowl is an applied ethics competition, meaning we apply what we learn about ethics to real-world problems, which is important for everyone to do. I think the questions that are central to ethics are what kind of people should we be and what kind of world should be build?

“The problems that we study in Ethics Bowl are problems that we all confront and that affect all our lives. Asking questions and thinking about how to solve those problems, what kind of world we want to build, what a better world and a more just world would look like — that's an endeavor that concerns all of us and that all of us should be part of, especially young people looking to do good in the world.”

This year’s ASU Ethics Bowl team consists of about a dozen members who have been meeting every week for the past several months to review cases and prepare arguments.

Students must anticipate questions that may be asked during competition and prepare a 10-minute speech explaining and defending their analysis for each case.

Current topics include Washington, D.C., statehood, the controversy over critical race theory in schools, ransomware attacks on critical infrastructure, vaccine inequality and vaccine mandates, abolishing the U.S. congressional filibuster and defunding the police, she said, adding that she and her teammates also have discussed Florida’s ban on the ownership or sale of iguanas and other large lizards, universal child care and the criminalization of homelessness.

Venkatraman said she has gained confidence as a public speaker and learned valuable skills such as structuring arguments and collaborating with a team.

“Most importantly, I think, is that I've learned to think in different ways and ask different kinds of questions, and Ethics Bowl has changed my worldview significantly,” she said.

“The question that's always at the back of our minds in Ethics Bowl is, what kind of world do we want to live in? What does a better, more just world, look like and how can we get there? What's ethical, or what's just, isn't limited to what's possible, or what feels possible in the world we currently live in. Solving the problems we discuss in Ethics Bowl is ultimately about transforming the world we live in, trying to imagine what's been deemed unimaginable and building a better world.”

Ten of ASU's 13 triples – one shy of tying the single-game school record – came during a first half in which the Sun Devils (2-2) shot a blistering 59 percent from beyond the arc on their way to a 48-27 halftime advantage. ... Ten of ASU's 13 triples – one shy of tying the single-game school record – came during a first half in which the Sun Devils (2-2) shot a blistering 59 percent from beyond the arc on their way to a 48-27 halftime advantage.