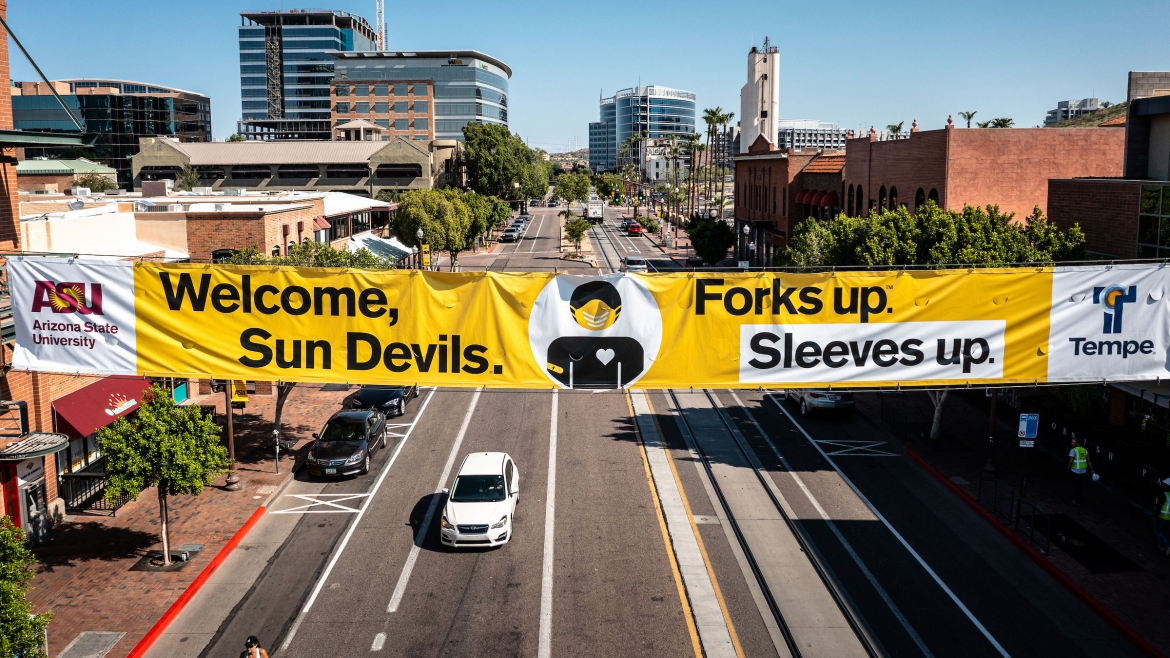 State of our State examines how innovations can be sustained

The COVID-19 pandemic has been distressing and disruptive, but many of the forced changes have revealed a silver lining. The annual State of the State conference captured that glass-half-full attitude on Nov. 15.

“Sparked by Disruption: The Role of Public Policy in Sustaining Pandemic-Era Innovations” was the topic of the livestreamed event held by the Morrison Institute for Public Policy at Arizona State University.

ASU President Michael Crow said we should consider how to learn from the pandemic.

“How will we address the pandemics of the future and the complexities of the future, which will come the way this pandemic came – unexpectedly?” he said.

“How do we use this moment as a design moment?

“How do we take metro Phoenix and all of Arizona away from our historical economy founded on fragility – ups and downs – beyond even an innovative or resilient economy all the way to what we call an anti-fragile economy, where organizations are continuously innovating in terms of adaptation and creative, economic opportunity?”

The webinar featured several speakers discussing how their institutions pivoted during the pandemic in order to achieve their goals. They included:

Carolyn Stewart, superintendent, Bullhead City Elementary School District: This small rural district, along the Colorado River in northwest Arizona, is dependent on tourism, including recreation on the river and casinos in nearby Laughlin, Nevada. Like other rural districts, Bullhead City has had trouble attracting and keeping teachers and staff.

During the pandemic, people paid cash for properties in the district, turning housing that had been rented to district employees into weekend getaways.

“As a result, current employees have been forced to leave when homes they were renting were sold,” Stewart said. “Even if Bullhead City could attract teachers from outside the community, there is no affordable housing for them.”

So the district decided to use recovery funds to build affordable housing. The goal is to put one-, two- and three-bedroom manufactured duplexes on a 5-acre property.

“The concept is to have a landing place for new employees from outside the area to foster social connections and encourage them to remain in the community to find permanent housing.”

Robbie Koerperich, superintendent, Holbrook Unified School District: This rural district has four schools and 1,800 students in an area the size of Rhode Island that includes parts of the Navajo Nation. Some students were spending up to 90 minutes each way on the school bus every day. During the pandemic, learning in most districts went remote.

“In Holbrook and other rural school districts in Arizona, we knew we couldn’t bring live teacher-led activities to students’ homes because many don’t have internet, and some don’t have electricity,” he said.

So the district started delivering food and school materials to families at bus stop locations around the district.

“That experience caused us to think, ‘What if we could take a whole classroom to them?’ ” he said. So they used federal funds to create the “Road Runner Learning Bus,” outfitting an old bus with a generator, Wi-Fi, desks and laptops.

“Now a driver, a teacher and an assistant can travel to students and they can receive one-on-one education at a parking lot, gas station or in their neighborhood,” he said.

For now the bus is limited to reading intervention and special education. Koerperich said the district wants to convert small, 15-student buses to learning centers so that teachers can drive them without needing a commercial driver’s license.

Gwendena Lee-Gatewood, chairwoman, White Mountain Apache Tribe: As the pandemic was escalating in 2020, the tribal council issued a cease-and-desist order to require social distancing in the community.

“Every one of us has had to make sacrifices, individually and overall,” she said, noting that the prohibition of funeral wakes and sunrise dances brought great anguish to the community.

The tribe established contact-tracing teams, sending community members along with health workers to foster trust as they knocked on doors. That was key in managing the pandemic and finding people who were symptomatic before they became very ill.

Several Arizona leaders discussed how their sectors innovated during the pandemic in a panel discussion moderated by Grady Gammage Jr.:

Samuel Thumma, judge, Arizona Court of Appeals: “My true heroes are the folks in trial court,” he said. Workers came up with ways to keep people safe, such as using restaurant-style pagers so people could wait outside for their hearing to be called.

“When someone is seeking to evict a tenant, there’s a degree of futility – ‘I can’t make it there so I’ll give up,’” he said, noting that some courthouses are not reachable by public transportation. “Before remote appearances were allowed, about a third to 40% of tenants never showed up, and those cases were resolved by default.

“In March 2020, remote appearances were first allowed, first by telephone and then by (Microsoft) Teams and Zoom, and the failure-to-appear rate in February 2021 was about 14%.”

Maria Cristina Fuentes, executive director, Governor’s Office of Youth, Faith and Family: Fuentes said that some changes that were done by necessity will now likely stay because of convenience, such as online driver’s license renewals (although drivers will still need to go to an office to get photos taken if theirs is more than 12 years old).

While supervisors are still hashing out in-person and work-from-home options for many of the state’s 33,000 employees, one department that had to move very quickly was child safety.

“Child protection doesn’t work remotely,” she said, so that office worked hard to get the system back quickly, and partnered with the courts to keep custody and adoption hearings on track.

“Thousands of children, but for those efforts, would still be in foster care today,” she said.

Corey Woods, mayor of Tempe: Affordable housing has been an issue in the city for a long time, but the pandemic exacerbated it, with many people becoming unemployed or underemployed.

The city adopted Hometown for All in January and since then has raised more than $6 million for affordable housing.

“You do find in other communities, when you put these housing developments near people, folks say, ‘We want affordable housing but not near me.’ We’ve changed hearts and minds,” he said.

Michael White, chief clinical officer, Valleywise Health: At the height of the pandemic, 90% of ambulatory health care was virtual, which required a lot of technical support.

“People wanted the safety of being in their own space,” he said.

“As we’ve gone through various stages, we’re at 30% today and expect it to stay this way.”

Telemedicine does lose the human touch, he said.

“There will be times it just cannot be done virtually,” he said, but a new study has found that telemedicine can drastically improve blood pressure and cholesterol levels.

Robin Reed, president and CEO, Black Chamber of Arizona: Reed says the pandemic made employers understand the value of their employees.

“We’ve had a significant paradigm shift from employers believing that the job opportunity was the prize and now realizing that the employee is the prize,” he said.

The disruption also allowed companies to focus on diversity and inclusion as a core change and not something to be considered in relation to an incident.

“As a former financial adviser, it was standard to advise our clients relative to investment capital that to get the greatest return, you need to diversify your investments,” he said.

“Why isn’t it the same with human capital?”

Zwick said that the technology changes wrought by the pandemic, such as being able to apply for benefits or attend eviction hearings online, have helped poor people.

“While the pandemic was often painful in so many ways, the changes that were required are vitally important,” she said.

Koppell said that the pandemic forced Arizona to confront many of its challenges, including the lack of affordable housing and inequity in education.

But solutions remain out of reach.

“We’ve had this flood of money into the social services sector which is unprecedented, and all of that is going to dry up and how prepared are we as a state or a community to pick up when that bridge collapses?” said Koppell, who also was dean of the Watts College of Public Service and Community Solutions at ASU.

“Finally, if we’re being honest, we are still in the thrall of deep political dysfunction, and until we can reconcile ourselves to the need to solve that, it will be massively difficult to engage in the creation of any solutions.

“None of the problems we confront are unsolvable. The biggest problem is getting our act together to work toward solutions.”

Top photo: A banner flies above Mill Avenue at Fifth Street in downtown Tempe, reminding the Sun Devil community to take precautions against the COVID-19 virus and get vaccinated. Photo by Charlie Leight/ASU News

No. 15/20 Sun Devil Swimming Has Record-Setting Outing on Day One of NC State Invite

The Sun Devils broke four program records and qualified several for the 2022 NCAA Championships on Day One of the NC State Invitational. ...

No. 15/20 Sun Devil Swimming Has Record-Setting Outing on Day One of NC State Invite The Sun Devils broke four program records and qualified several for the 2022 NCAA Championships on Day One of the NC State Invitational.