The physical archive of over 60 years of observations of wild chimpanzees in Gombe National Park, initiated by Jane Goodall — founder of the Jane Goodall Institute and U.N. messenger of peace — and comprising hundreds of thousands of handwritten notes by hundreds of researchers, will find a new home at Arizona State University’s newest, state-of-the-art research building, Interdisciplinary Science and Technology Building 7 (ISTB7).

The archive — the Jane Goodall Institute Gombe Research Archive — will be overseen by primatologist Ian Gilby, Institute of Human Origins research scientist and associate professor with the School of Human Evolution and Social Change. 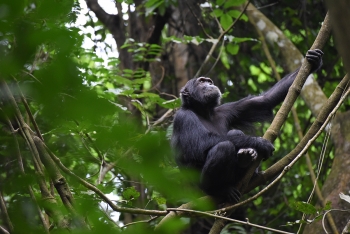 By the late 1960s, a remote outpost in Tanzania was bustling with field assistants and students studying wild chimpanzees in Gombe National Park. This research, begun by renowned ethologist and conservationist Jane Goodall, transformed our understanding of our closest living relatives and, in turn, our own place in the world. Her early observations of chimpanzee tool use, hunting and complex social relationships revolutionized the field of primatology. Since that time, a dedicated team has collected daily handwritten data on chimpanzee life — grouping, feeding and ranging — on check sheets, as well as longhand narrative observations of behavior, including grooming, tool use, dominance and mating.

In the early 1990s, a massive effort to organize, protect and analyze data from this priceless archive was spearheaded by Gombe researcher Anne Pusey. The data was organized into a powerful relational database that has resulted in many exciting and important discoveries that build upon Goodall’s early findings and continue to be essential to a long-term understanding of chimpanzees. Gilby is the director of the Gombe Chimpanzee Database, the digital repository of the physical archive.

Following the recent retirement of Pusey, the Jane Goodall Institute forged a new partnership with the Institute of Human Origins at ASU, where the archive and database will be curated by Gilby, a 20-year researcher at Gombe, who was a graduate student of Pusey’s. Because of its scientific and historical value, this priceless resource must be properly protected and preserved, while also remaining accessible to scientists.

“This is a dream come true,” Gilby said. “I have spent my whole career working with this amazing dataset, and I am humbled to be involved with its future, which promises many more exciting discoveries about our closest living relatives. I am particularly excited to make the data and our findings more accessible to a global audience.”

Lilian Pintea, Jane Goodall Institute vice president of conservation science, said, “We are excited to expand our collaboration with Ian Gilby and the new partnership with IHO at ASU to help us leverage Gombe long-term data as a global asset for interdisciplinary scientific research and conservation.”

Building on the Institute of Human Origin's expertise in primatology with chimpanzee researcher Kevin Langergraber at Kibale National Park in Uganda, and Regents Professor Joan Silk’s field research studying baboons in Kenya, the relocation of the collection establishes ASU and the institute as a global hub of noninvasive research on wild primates.

The priceless Gombe Research Archive deserves world-class storage. For the continued protection of these materials, an ASU Pitchfunder campaign has been started to upgrade the storage to fire- and water-proof filing cabinets fitted with acid-free, archival-quality folders. To become a supporter of the Jane Goodall Institute Gombe Research Archive fund, donate here.

If you're a male chimp, it pays to make friends.A collaborative study by researchers at Arizona State University, Duke University and the University of Michigan found that male chimpanzees that build strong bonds with many other males, and in particular with the alpha male, are more successful at siring offspring.Biologists have long asked why animals cooperate when it would seem more beneficial t...

If you're a male chimp, it pays to make friends.

A collaborative study by researchers at Arizona State University, Duke University and the University of Michigan found that male chimpanzees that build strong bonds with many other males, and in particular with the alpha male, are more successful at siring offspring. 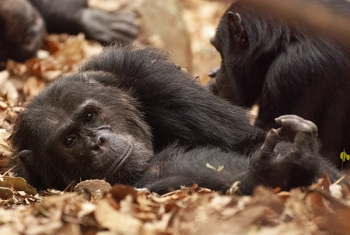 Biologists have long asked why animals cooperate when it would seem more beneficial to compete. Long-term relationships are particularly puzzling. Researchers would expect to see these social bonds only if they provide some sort of reproductive benefit to the individuals involved. To date, no study has identified a direct link between social relationships and reproductive success in chimpanzees. Much of the research in this area has been done with female primates, which are primarily concerned with accessing resources in order to reproduce more quickly. Male chimpanzees increase their reproductive success by mating with more females.

"Chimps cooperate frequently, and often in these very dramatic ways — you see things like grooming, all kinds of complex alliance formation, and group territorial defense," said lead author Joseph Feldblum of the University of Michigan. "The question is, what do males get out of it and how?"

It turns out, they get babies. One function of these social bonds, the researchers found, is to help males gain access to mating opportunities they wouldn't otherwise be able to get without help from their friends.

To examine the link between sociality and paternity success, the researchers examined behavioral and genetic data from a population of chimpanzees living in western Tanzania. The group is part of the ongoing study of chimpanzees in Gombe National Park, begun by Jane Goodall in 1960.

“This research highlights the value of long-term studies like these, which are essential for understanding the biology of a species that lives for many decades and is slow to reproduce,” said senior author Ian Gilby, an associate professor in ASU's School of Human Evolution and Social Change and a research affiliate with the Institute of Human Origins, which curates the data used in this study.

The researchers began by constructing a statistical model that captures the effects of male age, dominance rank and genetic relatedness to the mother on male siring success. They first used this base model to examine 56 siring events with known paternity between 1980 and 2014. Then they tested whether adding measures of male social bond strength to the model improved their ability to predict which male would sire a given offspring. They found that males with more strong association ties — those with the highest number of social bonds with other males — had a higher likelihood of siring offspring. In fact, having two more strong association ties meant a male was more than 50% more likely to sire a given offspring, after accounting for his age, relation to the mother and dominance rank score.

Next, the researchers wanted to understand whether a chimp's relationship with the alpha male underpinned male reproductive success. To do this, they examined the role of strong bonds with the alpha male, looking at 45 siring events by non-alpha males. They generated the same base model, this time comparing the model with models that included several measures of bond strength with the alpha male.

This result is consistent with previous ASU-based research on this population, which showed that alpha males conceded mating opportunities to those males that frequently groomed them.

"Sucking up to the boss is nothing new," co-author Anne Pusey said. “We show that it’s always paid off.” Pusey is professor emerita at Duke University and has spent the last 30 years of her career assembling, organizing and digitizing this unique dataset.

“The question of why males who form many strong bonds with other subordinate males are more successful is less obvious," Feldblum said. "So we looked at the relationship between this measure of strong bonds and coalition formation."

In animal behavior, a coalition is when two or more individuals jointly direct aggression toward others. According to previous research at Gombe, individuals that are more central in the network of coalitions are more likely to rise in rank and sire more offspring.

“This new study identifies a possible mechanism for this earlier result, which is really exciting,” Gilby said.

In the current work, the researchers showed that males that form stronger ties are also more likely to form coalitions, and the researchers hypothesize that this larger alliance network helps males gain mating opportunities. They also found that forming these many strong bonds leads to chimps' improvement in rank within the group; those that made it to the alpha position were also more likely to sire offspring.

A clearer idea of the benefits of social relationships in chimpanzees provides clues about the evolution of friendship in humans.

“Together with bonobos, chimpanzees are our closest living relatives and help us to identify which features of human social life are unique,” Gilby said. “This study suggests that strong bonds among males have deep evolutionary roots and provided the foundation for the more complex relationships that we see in humans.”

More research is needed to tease out how coalition formation and social bonds lead to siring succes. Having an ally nearby may increase the chances that a male mates with a sexually receptive female or may protect him from harassment from other males.

Or, Feldblum noted, "Is it because your ally will support you if a conflict erupts, your stress levels are lower, and you can devote more energy to mating efforts? This last step we still don't know."

Co-authors of the paper include ASU doctoral graduate Joel Bray and Christopher Krupenye of Duke, Johns Hopkins University and Durham University in the United Kingdom.