ASU student voters ages 18 to 21 — usually an age group that casts among the fewest ballots — turned out in November 2020 in significantly greater percentages than their older counterparts, according to a recent report chronicling U.S. college student voting. 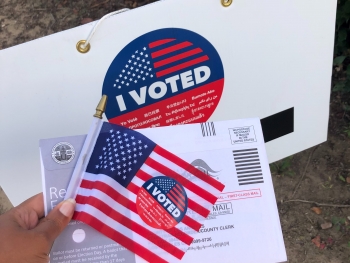 Some 7.5% more ASU student voters cast ballots in the 2020 general election than did four years earlier, according to the National Study of Learning, Voting and Engagement (NSLVE).

The Institute for Democracy and Higher Education at Tufts University in Medford, Massachusetts, published the NSLVE. The institute compiled enrollment data for a range of universities on file at the National Student Clearinghouse and compared it against public records for voter signups and turnout.

Alberto Olivas, executive director of the Congressman Ed Pastor Center for Politics and Public Service, said the noticeable rise was encouraged by the hard work of student volunteers. They were led primarily by the ASU Student Civic Coalition and the Andrew Goodman “Vote Everywhere” Ambassadors, who helped get out the vote in the midst of the COVID-19 pandemic.

Olivas said he was particularly impressed by the 18- to 21-year-old ASU student turnout, which he said was similar to that of voters in their 40s or older.

The high participation rate among the youngest voters is gratifying, Olivas said, given that many of them were voting for the first time. In most election cycles, such voters require more outreach and support to take part in elections, he said.

Overall, 63.4% of all registered ASU student voters cast ballots in 2020, up from 55.9% in 2016, according to the report. The percentage of all ASU students who are registered to vote also rose from more than two out of three to more than three out of four during the same period, from 68.4% to 79.7%.

Olivas said the overall growth in total registrations and turnout in 2020 occurred despite the pandemic-prompted cancellation of many campus voter-outreach efforts.

“You didn’t have the tables outside on the malls with information to remind students to vote,” said Olivas, who said the Andrew Goodman Fellows worked with the Pastor Center to engage and register students to vote in 2020 using other methods.

“What makes these increases in voter turnout so much more impressive is the fact that this election cycle took place in the midst of a devastating global pandemic, which made traditional in-person voter outreach efforts impossible,” he said.

“Groups and organizations that would normally hold many on-campus voter registration events, candidate forums, debate watch gatherings, ballot measure discussions, etc., no longer had those outreach mechanisms available to them. We all had to figure out for the first time how to conduct student voter engagement online and in virtual spaces, without the incentives of food, giveaways and the opportunity to meet and shake hands with candidates and local celebrities.”

Two May 2021 ASU graduates and former Goodman Fellows who worked on signing up student voters expressed satisfaction with the improved ASU turnout.

Ayesha Ahsan, who earned Bachelor of Science degrees in economics and sociology, is now a first-year law student at Boston College. She plans on a career in civil rights law, with the goal of expanding voting rights and working for racial justice.

“Engaging in opportunities at ASU to expand access to the ballot was instrumental in my choosing this career path, and I am grateful to have been given a chance to serve a community I care so deeply for,” Ahsan said. “While we have made great strides in increasing access to the ballot at ASU, civic engagement extends beyond voting. I hope that ASU's community will continue to create a widespread culture of advocacy and sociopolitical engagement. Civic engagement is crucial to developing an educated and prosperous community, and I am hopeful that we will continue to see tremendous growth from ASU and Phoenix in general.”

Cyrus Commissariat, now a first-year student at Northwestern University’s Pritzker School of Law in Evanston, Illinois, said the experience taught him that voting has many ramifications.

“It has been apparent to me that the law has inequities baked into it, which underscores the importance of voting,” said Commissariat, who earned Bachelor of Arts degrees in political science, history and French. “When the electorate is engaged, and politicians know we are watching, we can rewrite these inequities and make the law work for everyone. Reading these numbers is a tremendous source of pride for this Sun Devil. There is so much work yet to be done."

The report made several findings about ASU student voting behavior. Among them:

The Pastor Center is based at the Watts College of Public Service and Community Solutions.

Barrett, The Honors College at Arizona State University is on a quest to establish new scholarships that will expand access and opportunity for students and inspire a new generation of donors. The 25 by 25 Scholarship Program aims to develop 25 new endowed scholarships by the year 2025. Under the program, for every scholarship endowment commitment of $25,000 total ($5,000 per year for five years...

Barrett, The Honors College at Arizona State University is on a quest to establish new scholarships that will expand access and opportunity for students and inspire a new generation of donors.

The 25 by 25 Scholarship Program aims to develop 25 new endowed scholarships by the year 2025. Under the program, for every scholarship endowment commitment of $25,000 total ($5,000 per year for five years), Barrett will award a $1,000 scholarship annually to a student until that endowment is completed.

Scholarships usually are not awarded until endowments are completely paid. The 25 by 25 program allows for more students to get awarded earlier.

“It is so outstanding to see wonderful alumni, parents and community members invest in Barrett students. We really hope that the 25 by 25 program will incentivize more people to become endowment donors and help build perpetual support for our students,” said Chelsie Bruggeman, director of development for Barrett, The Honors College.

The Smith family, which includes three ASU alumni who graduated with honors — Susan Bitter Smith, ’77 BA and ’82 MBA; Prescott Smith, ’06 BS and ’12 MBA; and Windsor Smith, ’16 BA/MMC — is the first to create an endowed scholarship under the 25 by 25 program.

The Smiths said their own study abroad experiences led them to want to help students with overseas travel expenses.

Windsor maximized her study abroad experience in 2014 as a student in Barrett, The Honors College and the Walter Cronkite School of Journalism and Mass Communication.

She went to London, Paris and Milan on a journalism-focused trip where she and other Cronkite students visited news organizations in each city, including the BBC, Reuters, and CNN in London, where she met news host and anchor Christiane Amanpour.

“My study abroad experience was amazing and one of the highlights from my time at ASU,” said Windsor, who is now a news producer at ABC15 in Phoenix.

Prescott participated in two Barrett summer study abroad programs, one in Athens and Rome in Italy and in Dubrovnik, Croatia; and another in London, Dublin and Edinburgh, Scotland.

“These were both absolute highlights of my college experience,” said Prescott, now vice president of Technical Solutions, a Scottsdale-based public affairs firm. “There is nothing quite like immersing yourself in another culture. It teaches you about world history and the present day unlike any book or school course. Plus, the relationships and bonds you make with other students on trips like this are incredible. I still talk to many of the Barrett students that studied abroad with me.”

Susan said study abroad opportunities were not available to her when she was a student, but she later participated in a Young Political Leaders study abroad program, where she saw firsthand the importance of foreign travel in expanding leaders’ knowledge and professional networks. She also saw how Windsor and Prescott benefited from studying abroad.

They were “fortunate enough to go on study abroad trips as students through ASU, and, as a parent, I could see how much those trips enriched not only their academic education, but also their life skills education. I firmly believe these unique opportunities enrich a university academic program, no matter what the degree discipline is,” said Susan, president of Technical Solutions and the executive director of the Southwest Cable Communications Association.

“Barrett is a one-of-a-kind educational opportunity, and now having both of my children as alums, I am absolutely convinced that there is true family value in investing in Barrett and empowering more students to have the study abroad experience.

“A Barrett scholarship allows our family to create a continuing legacy at Arizona State and Barrett, a legacy that our family is proud of and an educational institution that we want more students to be able to experience.”

For more information about how to support the 25 by 25 campaign, contact Chelsie Bruggeman at chelsie.bruggeman@asu.edu.