They may not be listening to the strains of “Hail to the Chief” just yet, but several Arizona State University School of Public Affairs students recently heard expert vote-getters describe what it takes to work on and win a political race.

Successful campaigners gave elections advice to the nine students, who are interested in political careers, and others at the Community Candidate Orientation and Development Forum. 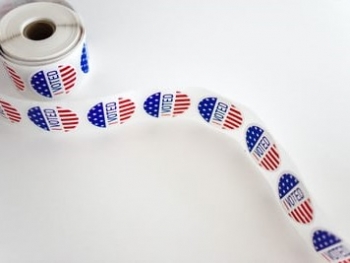 The forum is “a learning opportunity not only for those who want to run for public office but for others who desire to get into campaign management, budgeting, fundraising, communications and get-out-the-vote activities,” said Geoffrey Gonsher, a School of Public Affairs professor of practice who arranged for the students to attend.

Gonsher said the opportunity was invaluable for students to also learn how community and business people prepare for, contribute to and participate in the electoral process.

“The information may energize students to run for elected office, decide to work for an elected official or take on responsible management positions within public agencies at all levels of government,” he said.

The Oct. 20 event was sponsored by the National Association of Realtors and several Arizona Realtors’ organizations, and it was held at SkySong, the ASU Scottsdale Innovation Center.

Participants heard from John Winston, National Association of Realtors campaign services manager who is a veteran of several national and local campaigns, and Justin Allen, a political strategist and former Colorado legislator.

Here, three of the students discuss what they learned from the forum and its effects on what their futures in politics and public policy might be like.

Halle Aquino is a senior who will earn two bachelor’s degrees: one in political science from The College of Liberal Arts and Sciences and one in public service and public policy from the School of Public Affairs, both in May 2022, as well as an accelerated Master of Public Administration degree in May 2023.

Justin Kent will earn a Bachelor of Science degree in public service and public policy from the School of Public Affairs with a focus on emergency management and homeland security in May 2022.

Zak Gutzwiler is pursuing concurrent Bachelor of Arts degrees in theater (design and production) from the School of Music, Dance and Theatre and in film and media production from the Sidney Poitier New American Film School. Both are in the Herberger Institute for Design and the Arts. His minor is in public service and public policy in School of Public Affairs. He will receive his degrees in May 2023.

Question: This forum was probably unlike your typical political science or public affairs class. How did it differ?

Aquino: The speakers were teaching us based on their real political campaign experiences, not theoretical or conceptually based information. They presented to us confidently, knowing they have worked through all the highs and lows of running political campaigns. I was able to apply myself to all of the knowledge they presented to us, which allowed me to ponder the endless possibilities that come with pursuing a political career.

Kent: It was very different. This was a step in a new direction for the most part. This workshop provided a different type of opportunity for people with interests in politics. The speakers brought in their own experiences from both the federal and state level.

Gutzwiler: Attendees were able to interact with community members and policy makers alike to implement proven ground-level concepts. In the classroom we all too often focus on high-level topics and forget how to work on matters that directly affect members of the community.

Q: Name the most important thing you learned from the forum. Then share what you think you’ll do with that knowledge.

Aquino: Truthfully, the most important thing that I learned was the importance of giving people hope. Serving in public office is based on the desire to do good for the constituents and the communities that you represent in office. The seminar speakers emphasized that we need more public servants willing to become the defining leaders who provide optimism to people for the future. Making it a priority for me to find ways to instill and encourage hope into others’ lives will most definitely contribute to a better world today.

Kent: The panel was the best part of this seminar. Having both former Mayor Paul Johnson and former legislator Steve Huffman sit down and talk about their individual experiences with politics was eye-opening. Being in different political groups had no (bearing) on the information they presented us. They stressed the importance of working together and doing what was best for the community. I plan on taking the advice they had given us and bringing it forward with me into my career.

Gutzwiler: How to manage your campaign finances became one of the most useful discussions of the seminar – it is a topic often forgotten and becomes an issue as campaigns become more and more expensive. The tools given allow candidates and policymakers to understand the drawn-out process of fundraising and spending while keeping strict and fair election policies for all candidates.

Q: In this age of polarized political positions, is it possible to serve one’s entire constituency adequately? That is, no matter what a well-intentioned officeholder does, are they going to disappoint or even anger a pretty large segment of the electorate?

Aquino: Yes, there is a way you can serve an entire constituency adequately, even in today’s age of polarized political positions. There will always be at least one person who disagrees with something, which makes it critical for an officeholder to choose their battles wisely. An officeholder who does their job adequately knows how to maturely empathize with people who have differing beliefs and perspectives. Being someone who is willing to converse with all populations of people gracefully is the key to successfully serve a constituency, as well as promote civil discourse.

Kent: They wanted us to understand that you may or may not be able to uphold every promise you make while running for office. Things happen and you can only promise your best. Mr. Johnson stated that after the election you should really focus on the job and not so much the next election. If your focus is only winning, then you will end up missing the best parts about being an elected official.

Gutzwiler: I believe one is able to serve the entire constituency adequately, but that does not ignore the fact that eventually someone will be disappointed or angry. Proper decision making comes with years of policy planning and many people working together – this has been many times ignored by the constituency when the outcome may seem unfavorable. A part of leading the community is being able to see and manage the big picture and mitigate the risks that appear when decisions are made.

Q: When talking about a political career with friends or family, someone might encounter some questions or even criticism. What do you tell people you know about why you think it could be the path for you?

Aquino: Certainly, the possibility of pursuing a political career is met with tension and unease as this career path would be difficult. Despite this, a political career could be the path for me because I have seen how tragedy and suffering have highlighted the vulnerabilities of government and society. I believe the restoration of connection and empathy into society will come with building innovative solutions together. It is more important for me now than ever to consider how I will do my part at this critical point in time. I welcome the opportunity to do it on a larger scale.

Kent: I like to think of myself as a problem solver. I really enjoy getting to know and help others when they need it. I believe a political career is the right choice for me. I am someone who generally gets along with everyone. I understand that there will always be disagreements, and I feel like that is part of the challenge. When you are running for office, there are things you need to remember. One big concern is family. It is not just you running to be an elected official. Your family members may encounter some criticism. The best thing you can do is take it with a grain of salt. Everyone has a voice, and I believe every concern should be taken into consideration.

Gutzwiler: I believe a career in politics or policy is the opportunity for you to serve your community and adjacent communities. I wish to advance policy and funding for the arts within the cultural and academic spaces. We often ignore the arts or believe it is a waste of time and money. But in reality, it drives our everyday world just like science and innovation, and we must serve and advance it just like we would any other sector we find to be of importance. Taking care of the arts and creating policy that benefits the arts allows us to advance the cultural understandings of our community.

The School of Public Affairs is part of the Watts College of Public Service and Community Solutions.

Kraws made 49 saves against the Bobcats on Saturday night. ... Kraws made 49 saves against the Bobcats on Saturday night.