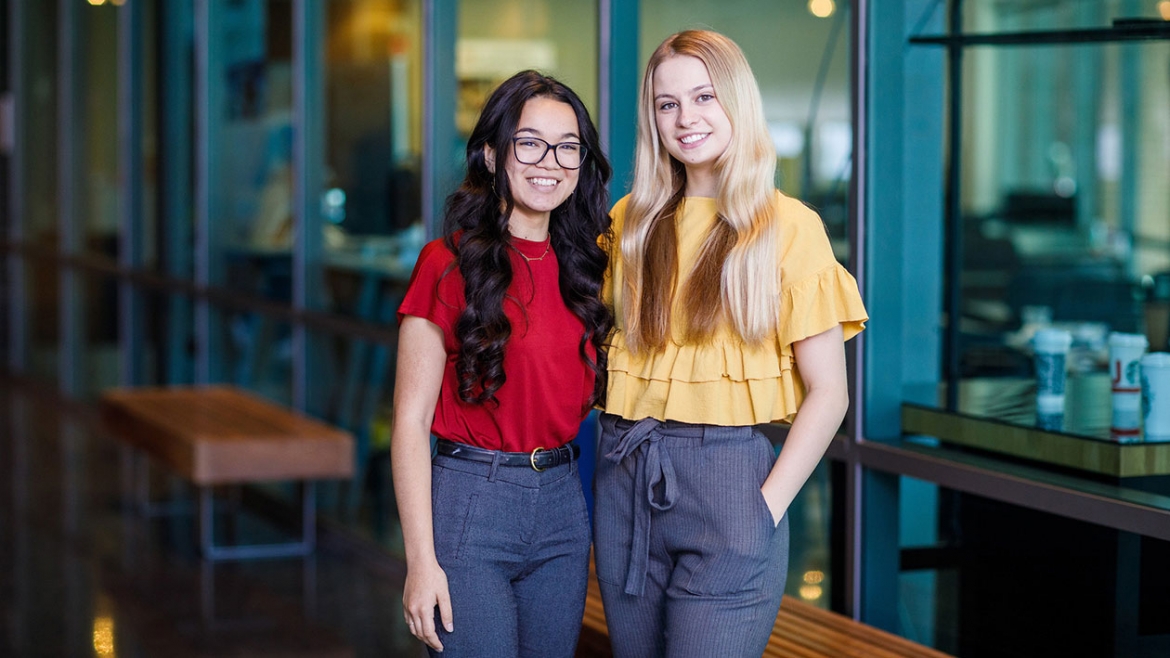 Pair of undergrads honored for their innovative note-taking tool, Jotted

Updated March 28, 2022: Jotted was named the winner of the 2021 Red Bull Basement global competition, beating finalists from 44 other countries to earn the top prize. The Global Final, originally scheduled for December 2021, was postponed until March 2022 due to the COVID-19 pandemic. Learn more about their tool below.

Two Arizona State University students will represent the United States in Turkey in the Red Bull Basement Global Final on Dec. 13–15. Brinlee Kidd and Sylvia Lopez were selected from 182 applications across the country to pitch their automated note-taking tool, Jotted.

The Red Bull Basement program was created to empower student innovators in all areas of study to kick-start their ideas using technology to drive positive change.

“Our goal with Jotted is to empower students and prepare them for the academic challenges they will inevitably face,” Lopez says.

Like other popular note-taking apps, Jotted lets students type notes and organize them into digital notebooks. But it doesn’t stop there. The software automatically creates flash cards from the notes for future studying. It also includes a resource-finding feature. For example, if a student is confused during a lecture and the professor moves on too quickly, the student can mark that portion of the notes. Jotted will conduct a search and suggest additional resources to increase understanding. Before an exam, Jotted will even create practice tests based on the lecture notes.

The idea for Jotted grew out of personal experience.

“It kind of came to a head when I had a test in my computer information systems class,” says Kidd, a first-year student majoring in informatics with a minor in film and media production. “It took me 11 hours to study for this test. But by the time the test came, I realized that I spent more time just trying to find information than actually learning it.”

Kidd brought up the topic with her roommate, Lopez, a first-year student studying industrial engineering with a minor in human systems engineering. Their dorm-room discussions evolved into the idea for Jotted.

While the tool can help with late-night cram sessions like Kidd’s, she and Lopez hope it will also reduce the need for them, as well as “take the intimidation factor out of exams.”

“We think it could really help people learn better study habits. I mean, as you’re taking notes, giving you the option to create flash cards — that’s going to get you thinking about the test that’s coming up. Now you’ve just finished a lecture and you already have study resources. You already have a practice test. You already have all these resources, and the test is two weeks away,” says Kidd.

Lopez and Kidd are students in the Ira A. Fulton Schools of Engineering and Barrett, the Honors College at ASU. Both are also Flinn Scholars. Earlier this semester, they joined ASU’s Luminosity Lab, a student-driven, interdisciplinary research and development lab.

“Luminosity is about reimagining the traditional university model of student engagement,” says Mark Naufel, executive director of Luminosity Lab. “We train students of all academic backgrounds with a core set of 21st-century skills that allow them to lead the development of cutting-edge technologies. This is done irrespective of age — and Sylvia and Brinlee are proof that with the right skills and motivation, our students can perform at the highest levels of excellence and compete on the world stage.”

“I’d found an ad on Snapchat for Red Bull Basement,” Kidd says. “I brought it to Mark, saying maybe some of the older, more experienced lab members would be able to put something together to submit. And he just looked at us and said, ‘Why don’t you do it?’”

The Luminosity team supported Lopez and Kidd throughout the process of developing Jotted.

“We had enough coding knowledge to build out the foundation for an idea like this and to know that it was achievable, but once we advanced in the stages, we had a lot of late-night sessions with the people in the lab. They were incredibly supportive and efficient in creating this team around us,” Kidd says.

She adds: “In the past month or so I’ve learned so much about natural language processing, which is one of the main features in our app, and predictive analytics, things I never would have had the chance or connections to learn without the lab.”

As finalists, Lopez and Kidd receive additional resources and support through Red Bull Basement. Finalists are selected by a panel of judges who consider the feasibility, creativity and impact of the entries. Each finalist team — one from each participating country — receives access to a workspace, one-on-one sessions with international mentors and connection to a global network of innovators.

“We have been set up with countless mentors from around the globe and within the U.S. Red Bull headquarters network. Already we’ve been able to talk with some incredible people,” Lopez says.

Kidd adds, “We’re grateful for this opportunity from Red Bull Basement. It’s really incredible what they’re doing, creating a global community of young innovators that truly just want to change the world and make it a better place.”

In December, Team Jotted will spend three days in Istanbul immersed in workshops, mentorship sessions and more, culminating in the final pitch and the announcement of the 2021 global winner from among the 44 national finalists. The winners will receive a custom package of resources to realize their unique idea. All of the finalists will forge business relationships and networking connections with some of the world’s most visionary thought leaders.

Lopez and Kidd offer some advice to other students with promising ideas who aren’t sure if they can turn them into reality.

“There’s no shame in asking questions,” Lopez says. “If you have an idea, ask around, see what your friends think. Ask about things you don’t know or things you want to learn.”

“I’m also an Edson E+I FellowThe Edson E+I Fellows program is a cohort-based program for first-year students to explore the possibilities of entrepreneurship. Learn more at https://students.asu.edu/scholar-programs/entrepreneurship. with the J. Orin Edson Entrepreneurship + Innovation Institute, and their catchphrase is ‘just start,’” Kidd says. “I think there’s no better way to describe it. If you have an idea, ASU is such an innovative university. If you just take a little bit of time to research, you can find people who want to help you bring your idea to fruition.”

Lopez adds: “With Jotted, our goal is to empower students. We want to see anyone who even has an inkling of an idea give it a shot.”

Arizona PBS and the Walter Cronkite School of Journalism and Mass Communication at Arizona State University swept up a total of 10 Emmys and Student Production Awards at the Rocky Mountain Southwest Chapter of the National Academy of Television Arts and Sciences — in professional categories ranging from arts and entertainment to politics and government, as well as student categories ranging from...

Arizona PBS and the Walter Cronkite School of Journalism and Mass Communication at Arizona State University swept up a total of 10 Emmys and Student Production Awards at the Rocky Mountain Southwest Chapter of the National Academy of Television Arts and Sciences — in professional categories ranging from arts and entertainment to politics and government, as well as student categories ranging from newscasts to sports. 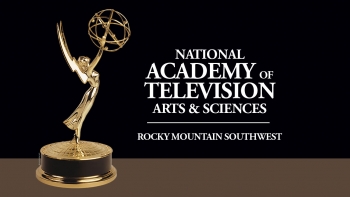 The “2020 Arizona Senate Debate,” one of Arizona PBS’ most-viewed programs in the station’s history, won first place in the Politics/Government Content category. During the debate, the moderators — particularly Ted Simons of “Arizona Horizon” — were praised for their questions and persistence.

Arizona State University also won an award for Branded Content: Short Form with “Innovation at ASU,” produced by the Office of Media Relations and Strategic Communications.

“I am extremely proud of the performance of the Cronkite School and Arizona PBS in the Emmys competition,” said Cronkite School Dean Battinto L. Batts Jr. “Our success is due to the work of many talented students and professionals who have dedicated themselves to the cause of journalism. It is a privilege to be able to celebrate their achievements this evening.”

Adrienne Fairwell, general manager of Arizona PBS, said, “I couldn’t be prouder of the Arizona PBS team Rocky Mountain Emmy award winners. The award recipients, and those nominated, should be applauded as their work is a true testament to their dedication to Arizonans. This team worked hard during the pandemic of 2020 to produce content that was entertaining, educational and informative. We are very proud to be our communities’ Arizona connection.”

The Rocky Mountain Southwest Chapter of the National Academy of Television Arts and Sciences honors the art and science of individuals working in television with Emmy Awards, and covers the regions of Arizona, New Mexico, Utah and southeastern California.

The 44th Annual Rocky Mountain Emmy Awards were held at the Phoenician.

"A Sunrise Prayer on Piestewa Peak"