Spring course to explore free speech on campus, in society

In spring 2022, Arizona State University undergraduates will have an opportunity to study the First Amendment and campus free speech controversies with one of the nation’s foremost authorities on free speech.

“Freedom of Speech on Campus and in American Society” (CEL 394, class 32773), taught by ASU Law Professor James Weinstein, the Dan Cracchiolo Chair in Constitutional Law at the Sandra Day O'Connor College of Law at ASU, is part of the list of courses offered by the School of Civic and Economic Thought and Leadership. We talked to Weinstein about freedom of speech and the controversies vis-a-vis its application on college campuses. 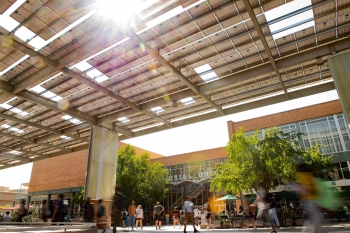 Question: What subject matter will this course cover?

Answer: The course will be divided into three parts. The goal of the first part will be for students to gain a basic understanding of contemporary American free speech doctrine. We will read and discuss excerpts of the major Supreme Court free speech cases, especially those providing rigorous First Amendment protection to speech on matters of public concern in public forums, such as in a city park or street corners, and in the media.

The second part of the course will consider the history of the American university, its present-day mission and the concept of academic freedom.

The third and final part of the course will focus on campus speech. We will consider such issues as barring controversial speakers from campus; the line between appropriate and inappropriate means of protest against such speakers; sanctions on faculty and students for speech in the classroom or in open spaces on campus that some students claim interfere with their equal educational opportunities; and sanctions on faculty and students for off-campus speech, especially on the internet, allegedly impairing on-campus equal educational opportunities. In doing so, we will focus on the extent to which the general free speech principles we studied in the first part of the course should apply at public colleges and universities via the First Amendment, and at private institutions of higher learning through adoption of such measures as the Chicago Principles.

Q: When it comes to college campuses, and particularly during these times of social media and social justice protesting, for example, how is freedom of speech clashing with society’s pressure for justice?

A: This question raises a very important issue relating to the purpose of the contemporary American university. The traditional concept of the university’s purpose is the creation and transmission of knowledge. Recently, however, the traditional conception has been challenged by those who want to add the promotion of social justice as a primary purpose of the university. Which view of the purpose of the university one adopts will have a significant bearing on the propriety of suppressing speech that alienates members of minority groups, as well as the creating of safe spaces on campus and requirements of trigger warnings. For this reason, in this course, we will spend considerable time discussing and debating what the primary purpose of a university should be.

Q: Which texts will students read?

A: The primary textbook will be "First Things First: A Modern Coursebook on Free Speech Fundamentals." An online version of this text is available to students for free.

Arizona State University junior John Keane visited Iraq earlier this semester as part of a group teaching English as a second language, an experience that helped him develop skills he intends to use in his future career.Keane, who is majoring in English with a concentration in linguistics and also pursuing a certificate in TESOL (Teaching English to Speakers of Other Languages), said the t...

Arizona State University junior John Keane visited Iraq earlier this semester as part of a group teaching English as a second language, an experience that helped him develop skills he intends to use in his future career.

Keane, who is majoring in English with a concentration in linguistics and also pursuing a certificate in TESOL (Teaching English to Speakers of Other Languages), said the trip was relevant to his classes at ASU and confirmed his passion for helping others learn English. 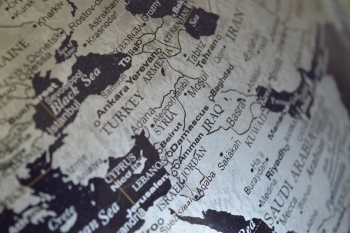 “Teaching English is exactly in line with what I’m studying,” he said. “I’ve been studying Arabic through the School of International Letters and Cultures (where Keane is also a student worker) and want to teach English overseas if I can after graduation, so this trip was also a great networking opportunity.”

Keane was invited on the trip by Bob Blincoe, a retired Christian minister who lived in northern Iraq in the 1990s. Keane and Blincoe along with three other native English speakers were hosted by the Global English Institute in Baghdad, where they were able to provide instruction on English vocabulary.

“John and I and the other teachers found the students eager and friendly. They want to rebuild their lives after suffering through many years of war. They want to learn English to improve their lives. We found it quite natural to make friends with Iraqis. We recognized in each other a common humanity that brings us together,” Blincoe said.

When Keane returned to ASU, he was able to present on his experiences abroad in some of his classes, including his Studies in Second Language Acquisition course taught by Faculty Associate Ann Buckley. She said he was worried about missing class time to go on the trip.

“However, I assured him that this is precisely the opportunity that this class should be preparing students for!” Buckley said.

Buckley’s class this semester is focused on strategies for reaching diverse English language learners, including teaching English as a foreign language in countries where English is not among the “official” languages.

“In addition to sharing the experience in general, John spent a lot of time talking about the kinds of students he had. Although they were all citizens of Iraq, there was a huge disparity in the age range and the educational backgrounds of his students. They were all attending his class for different reasons,” Buckley said.

Alongside the instructional time in Baghdad, Keane and his traveling group were able to visit other modern Arab cities as well as the ruins of Babylon, which Blincoe said are buried under meters of dirt and river mud. 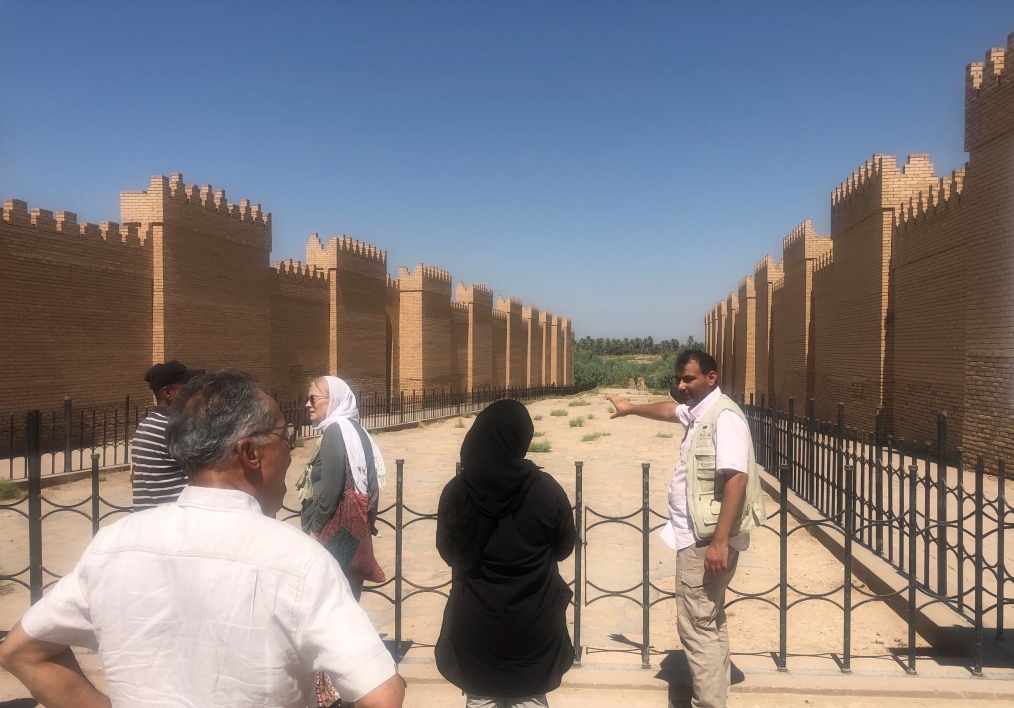 A tour guide stands in front of a rebuilt section of Baghdad. ASU student John Keane and four other native English speakers visited several historic and modern cities in Iraq after teaching English in Baghdad. 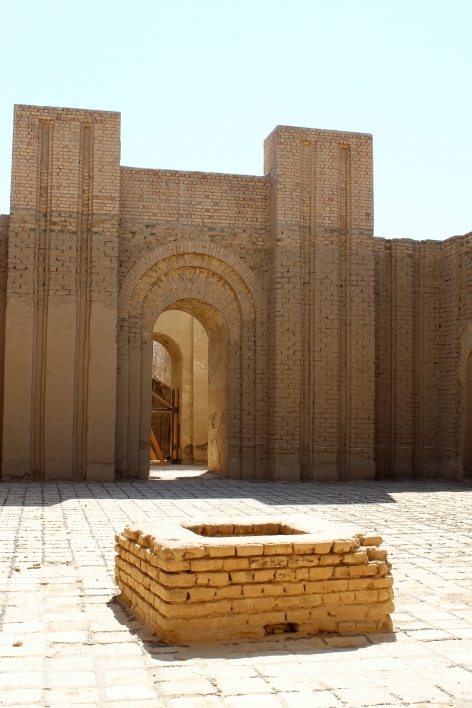 A well sits in the ruins of a temple in Babylon. Keane said some people believe that if you are older and unwed, the spirits inside the well will help you find a spouse if you toss in a coin and then walk around the well. 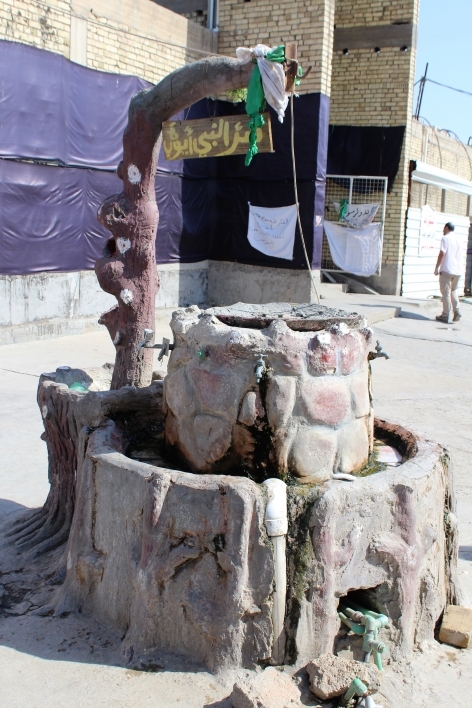 People who worship at the shrine of Ayoub (Job) believe the water from this well is miraculously healing, Keane said. 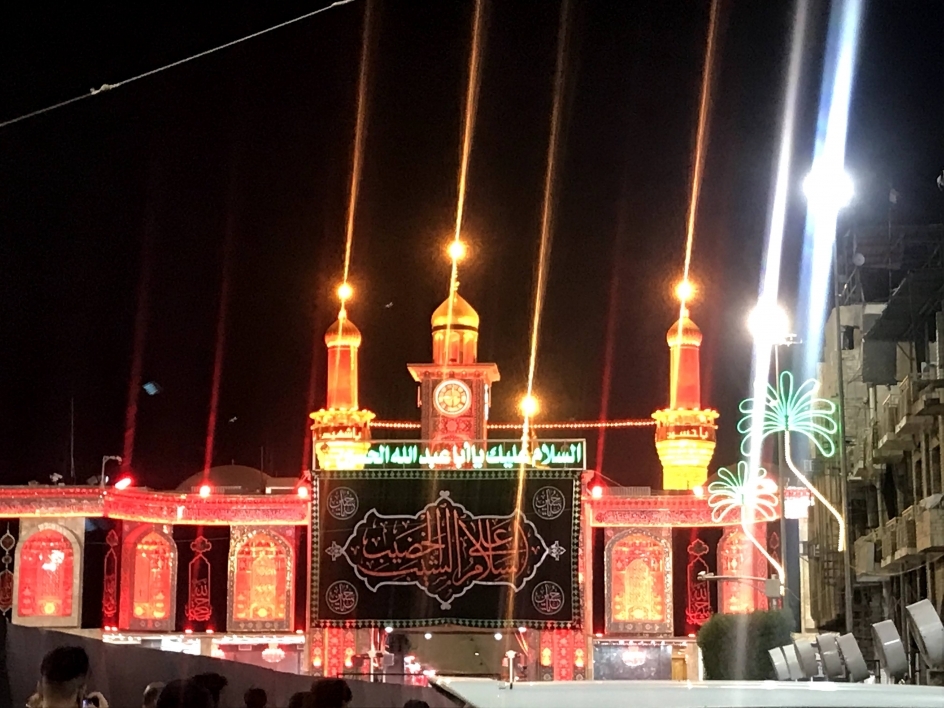 Shia pilgrims worship at the shrine of Hussain in Karbala, which was celebrating the festival of Ashura during Keane's visit.

“We were also there during the Shia holy month of Muharram and visited Karbala to see the festival of Ashura, where we saw people marching through a city half in ruins from the bombings of Saddam Hussein and Sunni extremist groups,” Keane said. “We saw remnants of a history dating back to the Bronze Era, and signs of the youth reconnecting with that history to break from the identity imposed by Saddam.”

Keane said he learned a lot from his travels in Iraq and from the individuals he was teaching. He returned to ASU with a better understanding of how to effectively teach English to speakers of other languages, but he also discovered how English instruction can provide new opportunities for individuals in Iraq and other countries.

“We were able to witness firsthand, both in the classroom and out, a country finally at an uneasy peace after decades of constant war,” he said. “We talked to many people who said there was no hope in their country, then visited a memorial for those who had had enough hope to give their lives fighting ISIS.”