The ceremony will take place at 7:30 p.m. Dec. 14 at Arizona Federal Theatre, 400 W. Washington St., Phoenix. More than 260 students are expected to graduate. 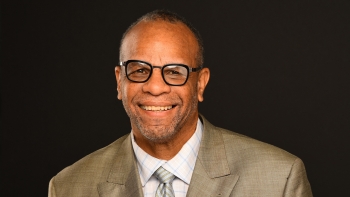 “William Rhoden is a strong and familiar voice for truth, justice and accountability not only in sports, but our society as a whole. He is an unquestioned leader in his craft and has put his time, treasure and connections toward providing opportunities and guidance for others coming along in the field. I am excited that he will be our convocation speaker and look forward to his words of encouragement and insight,” said Cronkite School Dean Battinto L. Batts Jr.

Rhoden is one of the most accomplished sports journalists of his generation and is regarded as an expert on the topics of sports and race. He is currently a columnist and editor-at-large at The Undefeated, ESPN’s digital platform that explores the intersection of race, culture and sports.

In collaboration with The Undefeated, ESPN and the Walt Disney Company, he has established the Rhoden Fellows Initiative, which identifies and trains aspiring African American journalists from historically Black colleges and universities.

“I’m honored to have been asked by Dean Batts to deliver the commencement address to the next generation of journalists. I cherish my connection with Cronkite, which has been on the cutting edge of teaching students how to navigate the challenges facing young journalists,” Rhoden said.

At the Cronkite School, Rhoden serves as a visiting professional and teaches “Opinion in the Digital Age,” which introduces students to the art of crafting and forming thoughtful opinion pieces for all existing platforms.

Rhoden rose to prominence at The New York Times, where he published his award-winning “Sports of the Times” column for 26 years and established himself as one of the top sports columnists in the country.

He won a Peabody Award in 1996 as a writer for HBO’s documentary “Journey of the African American Athlete” and earned an Emmy Award for his writing on the documentary “Breaking the Huddle: The Integration of College Football.” Rhoden is an accomplished author who published “Forty Million Dollar Slaves” in 2006 and “Third and a Mile: The Trials and Triumphs of The Black Quarterback” in 2007.

He was also presented with the 2017 Sam Lacy-Wendell Smith Award by the Shirley Povich Center for Sports Journalism at the University of Maryland Philip Merrill College of Journalism for contributions to racial and gender equality in sports.

When the Sun Devil Football team sprints out onto Frank Kush Field on Saturday night in Tempe, a sea of gold-clad fans will be there to cheer loudly for Arizona State University to wallop the Pac-12 rival USC Trojans.And among the crowd inside Sun Devil Stadium will be thousands of ASU families, soaking in the electrifying game experience as part of a three-day celebration of Sun Devil spirit, pri...

Attending 3-day celebration of ASU spirit, pride and tradition is another way families support their students

When the Sun Devil Football team sprints out onto Frank Kush Field on Saturday night in Tempe, a sea of gold-clad fans will be there to cheer loudly for Arizona State University to wallop the Pac-12 rival USC Trojans.

And among the crowd inside Sun Devil Stadium will be thousands of ASU families, soaking in the electrifying game experience as part of a three-day celebration of Sun Devil spirit, pride and tradition. A family takes time for a photo during a stop in the Sun Devil Marketplace during ASU Family Weekend in 2019, the last time the traditional fall event was held in person. Family Weekend returns to campus on Friday, Nov. 5, through Sunday, Nov. 7, with a full schedule of events. Download Full Image

Dozens of family-friendly events are scheduled for Friday, Nov. 5, through Sunday, Nov. 7, giving ASU families an opportunity to experience campus life alongside their Sun Devils during an exciting football weekend. The jam-packed Family Weekend schedule will feature academic college gatherings and fun campus-specific activities on Friday; spirit-filled events like the ASU Family Block Party leading up to the football game on Saturday; the Spirit Hike up “A” Mountain and family yoga on Sunday and more.

This cherished annual tradition is at the heart of ASU’s mission to ensure that parents and family members of Sun Devils have an opportunity for engagement with the university. Through attending events such as Family Weekend, families learn more about their students’ experiences and contribute to their growth and success at ASU.

“This weekend family members will experience campus life right alongside their Sun Devil. They’ll get to see how their student has decorated their room, visit their favorite hangouts, connect with their academic college and experience the excitement of an ASU game day together,” said Joanne Vogel, vice president of ASU Student Services.

“Attending Family Weekend is a great way for families to show support for their students, to start creating their own experience with ASU and have a lot of fun along the way,” Vogel said.

Some of the highlights of Family Weekend include:

Visit the complete schedule of events online. While registration for Family Weekend has closed, there are a number of activities that don’t require registration, including virtual activities and events happening before and after the weekend for all families to enjoy.