An international team of scientists, using the ground-based Gemini Observatory telescope in Chile, is the first to directly measure the amount of both water and carbon monoxide in the atmosphere of a planet in another solar system roughly 340 light-years away.

The team is led by Assistant Professor Michael Line of Arizona State University's School of Earth and Space Exploration, and the results have been recently published in the journal Nature. 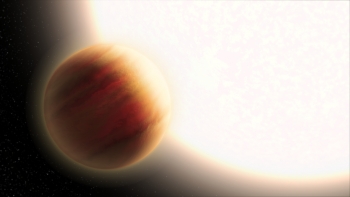 For this study, Line and his team focused on planet “WASP-77Ab,” a type of exoplanet called a “hot Jupiter” because they are like our solar system’s Jupiter, but with a temperature upwards of 2,000 degrees Fahrenheit.

They then focused on measuring the composition of its atmosphere to determine what elements are present, compared with the star it orbits.

“Because of their sizes and temperatures, hot Jupiters are excellent laboratories for measuring atmospheric gases and testing our planet-formation theories,” Line said.

While we cannot yet send spacecraft to planets beyond our solar system, scientists can study the light from exoplanets with telescopes. The telescopes they use to observe this light can be either in space, like the Hubble Space Telescope, or from the ground, like the Gemini Observatory telescopes.

Line and his team had been extensively involved in measuring the atmospheric compositions of exoplanets using Hubble, but obtaining these measurements was challenging. Not only is there steep competition for telescope time, Hubble's instruments only measure water (or oxygen) and the team needed to also gather measurements of carbon monoxide (or carbon) as well.

This is where the team turned to the Gemini South telescope.

“We needed to try something different to address our questions,” Line said. “And our analysis of the capabilities of Gemini South indicated that we could obtain ultra-precise atmospheric measurements.”

Gemini South is an 8.1-meter diameter telescope located on a mountain in the Chilean Andes called Cerro Pachón, where very dry air and negligible cloud cover make it a prime telescope location. It is operated by the National Science Foundation’s NOIRLab (National Optical-Infrared Astronomy Research Laboratory).

Using the Gemini South telescope, with an instrument called the Immersion GRating INfrared Spectrometer (IGRINS), the team observed the thermal glow of the exoplanet as it orbited its host star. From this instrument, they gathered information on the presence and relative amounts of different gases in its atmosphere.

"Trying to figure out the composition of planetary atmospheres is like trying to solve a crime with fingerprints,” Line said. “A smudged fingerprint doesn't really narrow it down too much, but a very nice, clean fingerprint provides a unique identifier to who committed the crime.”

And with clear measurements of both water and carbon monoxide in the atmosphere of WASP-77Ab, the team was then able to estimate the relative amounts of oxygen and carbon in the exoplanet’s atmosphere. 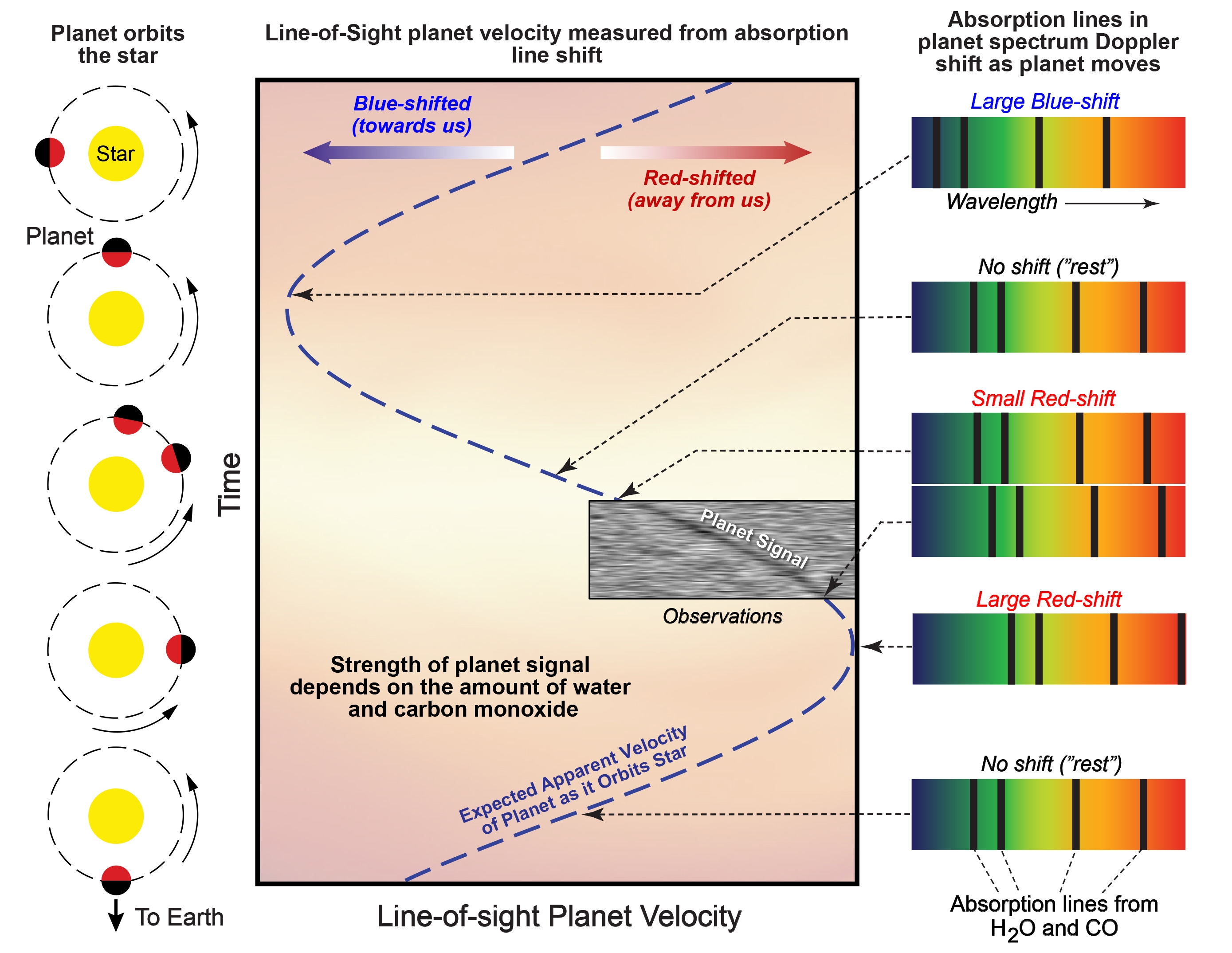 By measuring the Doppler shift illustrated in the right column of this figure, scientists can reconstruct a planet's orbital velocity in time toward or away from Earth. The strength of the planet signal as shown in the middle column, along the expected apparent velocity (navy dashed curve) of the planet as it orbits the star, contains information on the amounts of different gases in the atmosphere. Credit: P. Smith/M. Line/S. Selkirk/ASU

“These amounts were in line with our expectations and are about the same as the host star’s,” Line said.

Obtaining ultra-precise gas abundances in exoplanet atmospheres is not only an important technical achievement, especially with a ground-based telescope, it may also help scientists look for life on other planets.

“This work represents a pathfinder demonstration for how we will ultimately measure biosignature gases like oxygen and methane in potentially habitable worlds in the not-too-distant future,” Line said.

What Line and the team expect to do next is repeat this analysis for many more planets and build up a "sample" of atmospheric measurements on at least 15 more planets.

“We are now at the point where we can obtain comparable gas abundance precisions to those planets in our own solar system. Measuring the abundances of carbon and oxygen (and other elements) in the atmospheres of a larger sample of exoplanets provides much needed context for understanding the origins and evolution of our own gas giants like Jupiter and Saturn,” Line said.

They also look forward to what future telescopes will be able to offer.

“If we can do this with today's technology, think about what we will be able to do with the up-and-coming telescopes like the Giant Magellan Telescope,” Line said. “It is a real possibility that we can use this same method by the end of this decade to sniff out potential signatures of life, which also contain carbon and oxygen, on rocky Earth-like planets beyond our own solar system.”

Sun Devil Volleyball is back home this weekend for the penultimate home series of the season, hosting Cal on Friday at 7 p.m. before taking on No. 15 Stanford on Sunday at 1 p.m. MST. ... Sun Devil Volleyball is back home this weekend for the penultimate home series of the season, hosting Cal on Friday at 7 p.m. before taking on No. 15 Stanford on Sunday at 1 p.m. MST.