Team me up, Scotty!

In October 2012, a routine resupply mission to the International Space Station had profound impacts on the future of spaceflight.

It was SpaceX’s first contracted resupply mission with NASA and the first time a private company had ever docked with the ISS. This milestone proved to be a turning point for the burgeoning commercial spaceflight industry, as billions of dollars were invested and more than 500 startups emerged in the years following. 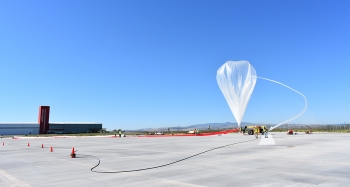 Now private spaceflight companies are forging their own paths to the stars, building their own vehicles, systems and infrastructure to do so. This is a break from the space exploration model of the past, in which NASA contracted companies to design and build spacecraft and technology that the U.S. then owned and operated. Though NASA remains the biggest player in space exploration — in July, NASA awarded SpaceX a $2.9 billion contract to create a lunar lander — private companies going their own way has changed the landscape of space exploration.

This disruption brought about by companies such as SpaceX, Blue Origin and Virgin Galactic has created new opportunities for collaboration — opportunities the Space Technology and Science Initiative (NewSpace) at Arizona State University was created to find.

Starting with a moonshot

Established in 2013 to forge partnerships between industry and academia to meet NASA’s ever-evolving needs, ASU NewSpace proved this strategy with one of its first projects: the Lunar Polar Hydrogen Mapper.

A small, shoebox-size satellite, the Lunar Polar Hydrogen Mapper, or LunaH-Map, is a NASA mission led by ASU School of Earth and Space Exploration Professor Craig Hardgrove. A former ASU NewSpace postdoctoral researcher, Hardgrove secured funding for LunaH-Map by collaborating with commercial space entrepreneurs, including multiple Arizona-based companies such as AZ Space Technologies, KinetX Inc. and Qwaltec. The LunaH-Map mission is expected to launch aboard NASA’s SLS Artemis 1 rocket in 2022 and begin its mission mapping water ice on the moon’s south pole.

“It was our first and largest award, and really demonstrated that this model works — academic researchers and entrepreneurial space companies can work in tandem to bring in big awards,” says Jim Bell, director of ASU NewSpace and a planetary scientist in the School of Earth and Space Exploration.

Since LunaH-Map, a spate of awards secured with ASU NewSpace support reflects the initiative’s long-term efforts to connect researchers with opportunities that forge relationships with private industry.

“These awards sample a range of opportunities that I think is representative of what we're trying to help do across all of ASU's campuses,” says Bell, “from an early career researcher who is super interested in getting involved in the space world but doesn't have a lot of experience with NASA to those with a lot of experience but who just needs to make the right connections.”

CubeSounder is based on a decades-old proven sensing technique to image water vapor for meteorology but updates it to use a lighter and more energy-efficient sensor system. Forgoing heavier and more energy-intensive components that are typically used to separate radio frequencies, Bryan instead built this capability into the sensor itself.

“We developed a structure with resonant cavities that respond to each frequency we want to measure,” Bryan says. “Unlike existing sensors, we do not need an active mixer or local oscillator source, which lets our sensor operate on far less power.”

If successful, Bryan hopes to see the CubeSounder technology implemented on a continental or global scale, or perhaps on a CubeSat program like LunaH-Map.

Though Bryan’s background in radio astronomy adequately prepared him to work with NASA, it was ASU NewSpace’s focus on networking that helped him secure the Flight Opportunities award. Bryan said everything clicked while he was attending a conference in early 2020 with ASU NewSpace Program Manager Scott Smas. There Bryan had an opportunity to speak with representatives from NASA and World View, and he realized that a proposal from the ASU team and World View had a lot of potential.

“So when we wrote the proposal, it was in the context of this moment that ASU NewSpace created,” Bryan says.

Arizona’s business landscape provides an excellent launchpad for NewSpace to pursue these kinds of collaborations.

When people think about space industry hubs, they might envision rockets being built in California or taking off from Cape Canaveral in Florida. But companies making transistors and circuit boards are just as important to creating space technologies as those constructing rockets, Bell says.

“When we started ASU NewSpace, I was really surprised to learn how many nuts-and-bolts companies there are across Arizona that enable building rockets and spacecraft and high-altitude balloons,” Bell says. “The depth of Arizona's presence in commercial space is really impressive.”

This partnership will increase access to ASU’s Core Research Facilities and create new relationships between local businesses and ASU researchers.

In addition to pairing up well-suited partners, NewSpace — in conjunction with ASU Research Development — holds workshopping sessions and classes for researchers looking to break into the world of NASA awards.

ASU NewSpace helped Yong navigate those differences, which resulted in a distinguished 2020 Early Career Faculty Space Tech Research Grant from NASA. Yong is working on an algorithm designed to coordinate robots that are physically tethered together to navigate and estimate terrain.

“If the robots are tethered together, then they can do more than if they were just to be on their own,” says Yong, likening it to mountain climbers. “Think of someone trying to go down a steep slope or cliff. If you have a rope with someone holding you at the top, then you can do a bit more than you would otherwise.”

Yong’s research is funded up to $200,000 a year for as many as three years. Tethers Unlimited, a small entrepreneurial aerospace company, is collaborating with Yong on the award. If successful, he imagines that his algorithm could find use in future rover missions.

“There are certain places that the rovers probably would not want to go, because it's too risky to explore,” Yong says. “If it breaks or falls somewhere, then that's it — you just wasted I don't know how much money and how much time. So the idea is to have multiple rovers, and by having more than one, they help each other explore.”

“They’ve basically created this little deployable camera that would pop out of a lunar lander as it's approaching the moon, land on the surface, and then look back and take movies of the lander coming down,” Bell says.

If the Lunar ExoCam finds its way aboard a rocket, it could capture the first-ever video of a lunar descent and landing from the surface of the moon.

The project was funded for $650,000 as part of NASA’s Space Technology Mission Directorate Flight Opportunities program, with Jason Achilles Mezilis of Zandef Deksit serving as the principal investigator. Other commercial space companies, including Honeybee Robotics and Ecliptic Enterprises Corp., are also on the team.

The award includes an educational component, which is where Das and Bell fit in. The pair helped define an aerial drone test bed for Das's students to use to evaluate the ExoCam prototypes, with support from the School of Earth and Space Exploration's Autonomous Exploration Systems special topics course.

“It was natural for that lander and camera group, which was really, really focused on the technical implementation, to reach out to ASU,” Bell says. “We'd already established the relationships. They knew ASU. They know we've got amazing students, that we have incredible programs. We're well-versed in working with companies on the corporate side of space to advance both our goals and theirs.”

The Hearing Health Foundation has named Arizona State University's School of Life Sciences Assistant Professor Timothy Balmer as a recipient of its 2022 Emerging Research Grants for his research regarding hearing and balance disorders.Balmer’s lab prioritizes disorders like Meniere’s disease, an ear condition that causes imbalance and vertigo. This disorder may also cause tinnitus, a hear...

The Hearing Health Foundation has named Arizona State University's School of Life Sciences Assistant Professor Timothy Balmer as a recipient of its 2022 Emerging Research Grants for his research regarding hearing and balance disorders. 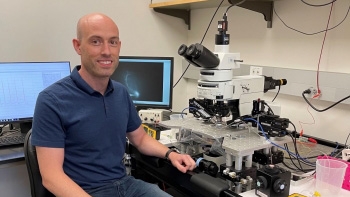 Balmer’s lab studies the vestibular cerebellum, a sensory system in the brain integrating signals that convey head, body and eye movements to coordinate balance. When an individual suffers from a condition like Meniere’s disease, the neural processing of this system is disrupted. As a result, vertigo and imbalance occurs.

Parts of the cerebellum are not yet fully understood by researchers, making it difficult to properly treat vestibular disorders. To better understand the physiology and circuitry of the vestibular system, Balmer’s lab studies a cell type in the cerebellum called the unipolar brush cell. These neurons have yet to be fully understood. However, if Balmer’s lab can successfully research their functions, it will help scientists be able to identify causes of vestibular disorders and suggest possible treatments.

“I hope that our research will identify avenues to help those that suffer from vestibular disorders such as Meniere’s disease,” Balmer said. “Anyone who has had problems with their vestibular system will tell you how awful vertigo can be and how important vestibular functions are to our well-being.”

Balmer is a returning recipient of this grant. In 2017, Balmer was generously funded by a donation from the Les Paul Foundation. This continued funding will help purchase the required equipment for research.

The Hearing Health Foundation is the largest nonprofit funder in the United States for research regarding hearing and balance. Since 1958, the organization has made numerous breakthroughs in this field of research. Their mission is “to prevent and cure hearing loss and tinnitus through groundbreaking research and to promote hearing health.” The foundation funds researchers who study the development of hearing loss, methods for treatment, possible prevention and ultimately a cure.

The Emerging Research Grants funded by the Hearing Health Foundation provide support to individuals actively working on esteemed hearing and balance research. The Emerging Research Grants program is competitive and grants funds to researchers who are likely to have the most rewarding success in their work. The program is led by the Council of Scientific Trustees, a group of scientists throughout the country that evaluate the applicants and determine their contributions in this field.

“Receiving this funding will help us purchase the equipment necessary to perform our research,” Balmer said. “But perhaps more importantly, receiving the approval of the group of established scientists that the HHF organizes to judge the merits of the research proposals supports the notion that our lab’s research goals are worth pursuing.”