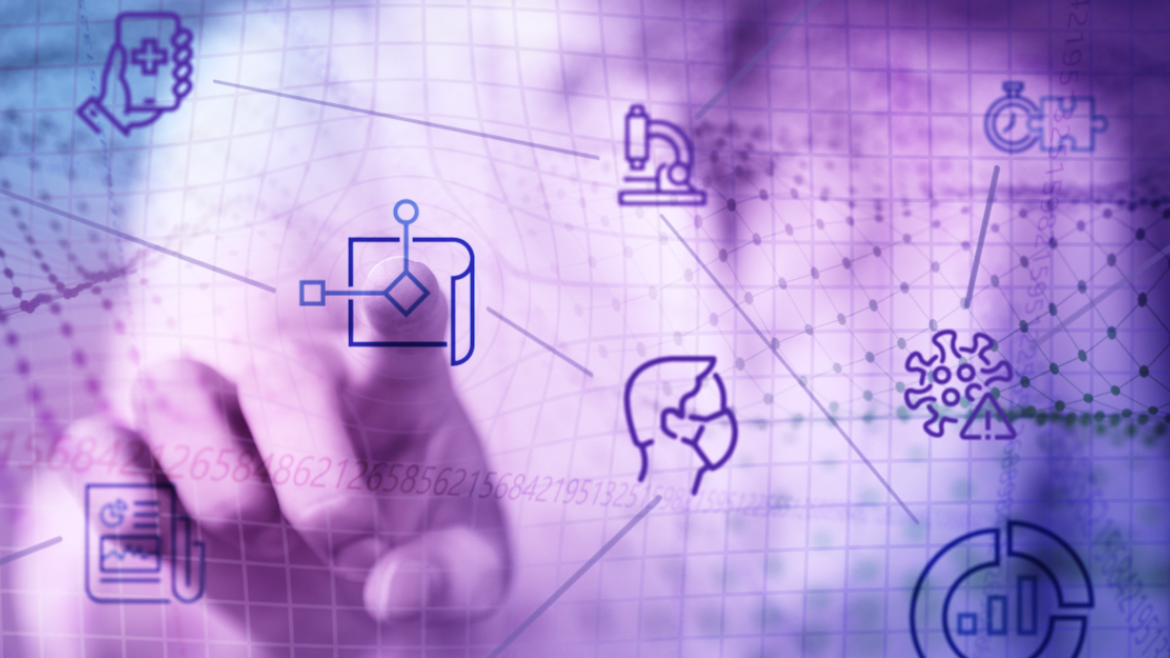 From your smartphone’s weather app telling you it will rain on Friday to the “check engine” light in your car to the safety of the airplane you’re about to board, computational modeling touches your life every day.

What is it? Combining the power of mathematics, physics and computer science, researchers replicate real-world events using computer simulations. The computers can then predict what’s happening — or could happen — in complex situations, from weather forecasting and aircraft flight to earthquakes and pandemics.

Unleashing data to curb a pandemic

A recent surge in the COVID-19 outbreak in Arizona and throughout the country has left people gripped with uncertainty as they confront countless questions, from whether breakthrough cases are now the norm to when booster shots might be needed. Without concrete answers amid a new wave of the virus, public policy makers, health care leaders and corporate executives struggle to formulate plans on whether to renew mask mandates, roll back reopenings or stay the course.

The experts in epidemiological modeling have emerged as leading providers of data about the coronavirus and its rapid spread in the state, helping government, businesses and individuals make informed decisions on how best to protect human health and well-being.

The task force’s data feeds an online interactive dashboard that has become the state’s go-to site for COVID-19 trends. It informs public officials of hot spots and hospital capacity and citizens about the virus’ trajectory in Arizona, allowing users to compare statewide data to the nation and look at transmission rates county-by-county as well as new vaccines by gender, age and ethnicity.

Using epidemiological modeling to save lives

“One of the big things we focused on with our models was hospital capacity,” Ross says. “We were able to let public officials and health care officials know what they would need in terms of COVID beds and nurses to care for patients. Hospitals were then able to make adjustments, such as canceling elective surgeries, and the public stayed away from the emergency room for things that weren’t true emergencies. By making some of those adjustments, we were able to make sure that everyone who needed an ICU bed in the state of Arizona was able to get an ICU bed.”

The team also warned of the dangers of eliminating mask mandates too soon as Gov. Doug Ducey granted local governments autonomy to establish their own health and safety measures to fight rising COVID-19 cases last summer.

“I’m confident that our model helped some public officials retain their masking policies,” Ross says. “And we know that those masking policies helped save some people’s lives.”

We were able to make sure that everyone who needed an ICU bed in the state of Arizona was able to get an ICU bed.”

“Similarly, we were able to raise the alarm around Thanksgiving, when our epidemiological model showed that household gatherings where people were unmasked in closed spaces would lead to an even bigger surge,” she adds. “And, indeed, that’s exactly what happened.”

A glimpse into the future

ASU’s COVID-19 pandemic modeling efforts revealed important lessons for the future, such as the need for a better public health data infrastructure for health officials to identify hot spots and inform reopening decisions.

“We really need to close some of the gaps to get better at our public health surveillance and reporting at the state and county level so that we have real-time data that’s feeding these models to make them more accurate,” Jehn says.

Meanwhile, pandemic modeling tools and data dashboards developed at ASU will prove to be as useful in the future as today. Lant reminds us that “we really have no reason to anticipate that COVID-19 is going to go away because there’s so much evidence to the contrary.”

What’s next? METAz is now taking a look at the future endemic phase of the coronavirus, when the virus will be continually present but affecting a relatively small number of people.

As scientists hone more powerful algorithms for disease forecasting, Lant foresees the day you’ll be able to check an app to monitor infectious diseases in your community — much like using a weather app that predicts sunny skies, rainfall and humidity.

“The National Weather Service has evolved into a global system of weather forecasting that includes sensors, computer models and high-performance computing infrastructure,” Lant says. “Researchers have taken science and brought it to the point that we get weather reports in our homes by watching TV or checking an app. Likewise, the understanding infectious diseases could advance to the point that we could check an app to see how much disease is around.”

Decades of racist policies like redlining have extracted wealth from Black communities, but one way to repair the harm would be to cancel student debt, according to a researcher who spoke at Arizona State University.“There is a big wealth divide that most Black people live with,” said Andre Perry, a senior fellow in the Metropolitan Policy Program of the Brookings Institution.“I don’t care... 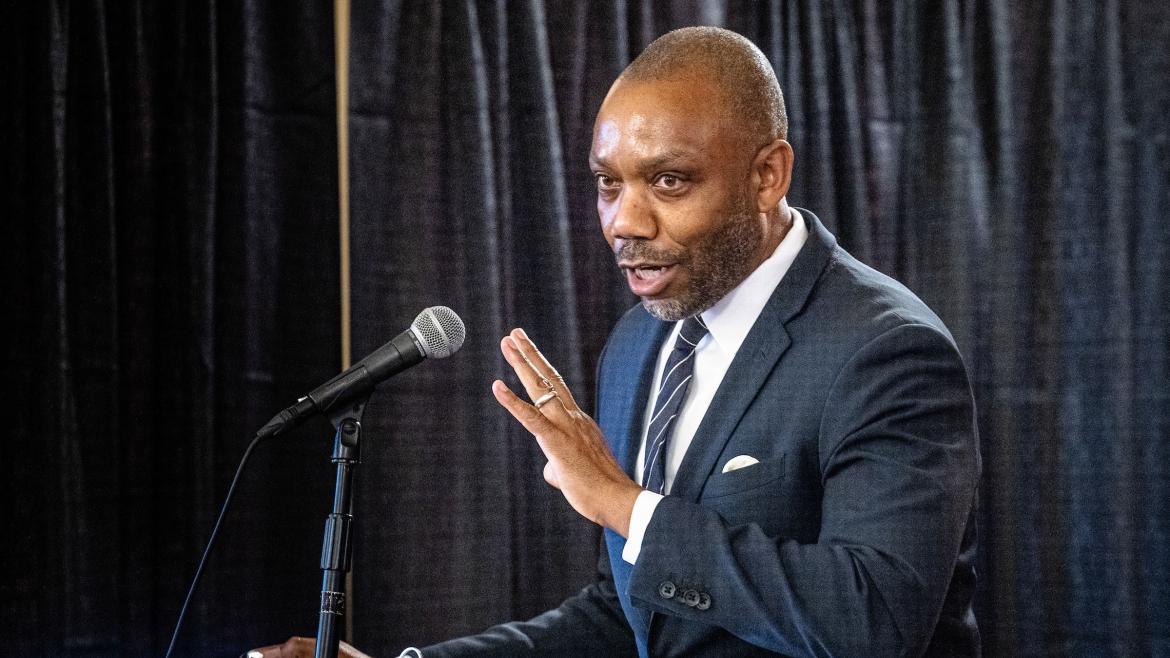 Decades of racist policies like redlining have extracted wealth from Black communities, but one way to repair the harm would be to cancel student debt, according to a researcher who spoke at Arizona State University.

“There is a big wealth divide that most Black people live with,” said Andre Perry, a senior fellow in the Metropolitan Policy Program of the Brookings Institution.

“I don’t care if you have a PhD or a high income. Most Black people did not receive the intergenerational wealth transfer that their white counterparts did, as a result of federal, state and local policy.”

Perry was the speaker for the 2021 Graduate College Distinguished Lecture on Thursday. His talk, titled “Canceling Student Debt is Anti-Racist (and Why We Must Do It),” explored why Black people typically must take out higher amounts of loans to attend college and why they have a harder time paying them back.

“There’s a reason why Black people have to take out more student loans,” he said. “We were denied the wealth that would have enabled us to pay for college.”

Redlining, the systemic policy of denying mortgages to Black people, created a system of grossly undervaluing property in Black neighborhoods. Perry, author of the book “Know Your Price: Valuing Black Lives and Property in America’s Black Cities,” estimated the lost equity of Black-owned property at $156 billion for the year 2017 alone.

In addition, as the cost of higher education has risen, the incomes of Black college graduates have not kept pace with those of white degree-holders. So because Black borrowers take longer to pay off their loans, they end up paying more in interest.

“One of the most repeated mistakes in this debate is the assumption that all people in a particular income stratum have the ability to repay the loans. That’s missing the lived experience of Black people,” he said. 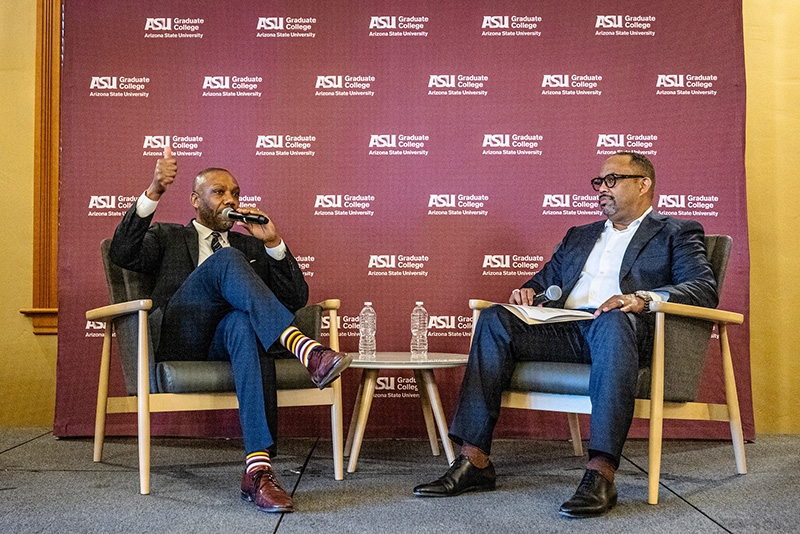 Andre Perry (left), senior fellow at the Brookings Institution, participated in a Q&A session with Battinto Batts, dean of the ASU Walter Cronkite School of Journalism and Mass Communication, during Perry's talk Oct. 21 in Old Main on the Tempe campus. Photo by Charlie Leight/ASU News

Perry said that student debt is already being canceled every day for small groups of borrowers, such as those who acquired loans through predatory lenders, people in public service and some veterans.

Perry, who said that debt cancellation does not need to be passed by Congress, is optimistic that it will happen in some form.

“I think it’s highly unlikely, when this repayment freeze is over in January 2022, that they will ask students to start repaying in an election year,” he said.

But debt cancellation is only a partial solution.

“At some point we need free college,” he said. “Only in America have we made higher education a luxury. It’s no longer a luxury. Go into the job market without a college degree and see how far you get.”

Perry's talk was followed by a Q&A session with Battinto Batts, the new dean of the Walter Cronkite School of Journalism and Mass Communication.

Batts asked: “There is some opposition to this. Some people say, ‘If students shouldn’t pay for higher education, who should? Taxpayers?’ ”

Perry said that the pandemic showed how beneficial federal aid is, with less reliance on borrowing, more saving and more home buying. He said the same thing would happen if Black people were freed from their monthly student loan payment.

“There’s a lot of skepticism, particularly when it comes to Black folks, on whether we’ll use the money to buy gold chains and jewelry,” he said.

During the pandemic, more Black people started businesses in Black neighborhoods, he said.

“We have got to learn how to trust people more, particularly Black people. That’s white supremacist thinking, that if you somehow get 500 extra dollars you’ll waste it.”

Top image: Andre Perry, senior fellow at the Brookings Institution, was the speaker for the 2021 Graduate College Distinguished Lecture on Thursday at the Tempe campus. His talk was titled, “Canceling Student Debt is Anti-Racist (and Why We Must Do It).” Photo by Charlie Leight/ASU News