Arizona State University Regents Professor Peter Buseck is the 2021 recipient of the David Sinclair Award from the American Association for Aerosol Research (AAAR), the leading international scientific research organization for the study of aerosols, with emphasis on atmospheric chemistry. This significant honor recognizes the sustained excellence of an active, established scientist who has made a lasting impact in aerosol research and technology throughout their career.

Aerosols, which prominently include tiny solid particles and droplets of liquids suspended in the air, play important roles in a wide range of processes, from an individual’s respiratory health to local weather and global climate. Air pollution in Phoenix, together with the desire to work on societally important research, provided the occasion for Buseck’s entry into atmospheric chemistry research in the late 1960s. Together with new PhD student John Armstrong, Buseck performed the first quantitative chemical analyses of individual aerosol particles using an electron microprobe coupled with careful modeling. Their work, initially funded by the Arizona Lung Association, identified types and sources of local atmospheric contaminants.

Buseck, with doctoral students Gary Aden, Jeff Post and John Bradley, further refined their techniques to characterize aerosol particles, as well as identifying previously unrecognized atmospheric particles. With funding from the National Science Foundation, Buseck and his research group conducted research across the United States, Mexico, South America, Africa and China, as well in the North Atlantic and Southern oceans. Their research contributed to the understanding of the role of solid particles in atmospheric processes and Earth’s climate.

“We were the first to study individual atmospheric particles with high-resolution transmission electron microscopy,” Buseck said. “We were able to show that tiny individual particles have a level of complexity that can reveal how they formed, where they formed and, to some extent, their reactions in the atmosphere, as well as their optical properties. These properties determine how they absorb, reflect and scatter light and other electromagnetic radiation that contributes to heating and cooling of the atmosphere.”

More recently, Buseck has studied the role of wildfires in the formation and distribution of tarballs, which his group discovered during an integrated research campaign focused on southern Africa, and other aerosol particles in the atmosphere downwind of wildfires.

“We are able to track these particles and see how their optical properties change as they age and evolve,” Buseck said. “Particles from wildfires affect cloud formation and climate by introducing large amounts of particles into the air, and of course this also affects people and animals who are breathing the air.”

Buseck holds joint faculty appointments in the School of Molecular Sciences and the School of Earth and Space Exploration, and he is also a renowned scientist in solid-state geochemistry, mineralogy and cosmochemistry, pioneering the use of transmission electron microscopy to study minerals, meteorites and aerosol particles at close to the atomic scale. For his work, Buseck has been honored with the Roebling Medal from the Mineralogical Society of America for outstanding original research in mineralogy and with the ASU Graduate College Outstanding Graduate Mentor Award, and he has been named a Graduate College Distinguished Research Fellow.

Buseck has had visiting appointments at Oxford and Stanford universities, the University of Paris and Harvard University. He was assistant to the director of the U.S. National Science Foundation from 1994-95. He is a fellow of the American Association for the Advancement of Science (elected 1967), the Geological Society of America (1959), the Meteoritical Society (1965) and the Mineralogical Society of America (1963). He is a Regents Professor and a sustainability scientist.

“The research of Peter Buseck and colleagues on airborne minerals and related aerosols is as important today as it was at the beginning of their research in the ’60s and ’70s when they studied air pollution in the Phoenix area,” said School of Molecular Sciences Director Tijana Rajh. “Buseck applied a molecular science approach to understanding the formation and role of airborne particles, and this was crucial for finding new relationships between particles, clouds and ultimately storms, thus refining existing approach to creating climate models.”

Buseck was selected by a committee of his peers for this award, which will be presented during the AAAR 2021 Annual Conference on Oct. 18–22. The award memorializes David Sinclair, one of aerosol science's great innovators, known for his knowledge, ingenuity and energy. Sinclair distinguished himself as a pioneer in aerosol science through his work with Victor LaMer at Columbia University.

“This award has special meaning for me because it is for work in atmospheric chemistry, air quality and climate impact that my students, postdocs and I have been doing for many years, but in subject areas that are greatly different from my geology and mineralogy background,” said Buseck. “It thus feels doubly satisfying to receive this acknowledgment from scientists in a totally different field (who recognize) that our work is significant and is having an impact.”

Director of the School of Earth and Space Exploration Meenakshi Wadhwa said, “Professor Peter Buseck’s work has been hugely influential in understanding the chemistry, mineralogy and crystallographic structures of terrestrial and extraterrestrial materials. Although his work has spanned these broad fields, it is wonderful to see him be recognized particularly for his contributions to aerosol research, which has significant implications for climate science and human health.”

Written by Karin Valentine, media relations and marketing manager at the School of Earth and Space Exploration, and James Klemaszewski, science writer for the School of Molecular Sciences.

The award, administered by the Sandra Day O’Connor College of Law at Arizona State University, was established in 2014 to honor the legacy of the school’s namesake, retired U.S. Supreme Court Justice Sandra Day O’Connor. It recognizes those who have made extraordinary efforts to advance rule of law, justice and human rights. 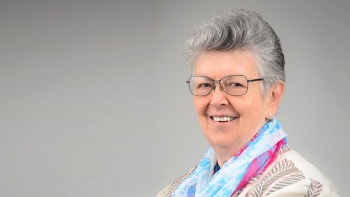 “We are living during very challenging times, and our efforts must be redoubled to create a world that is supportive, inclusive and kind,” Judge Elizabeth Odio Benito said. “I accept this award with a pledge to continue working for human rights, the rule of law and democracy.” Download Full Image

“I feel very honored and humbled in receiving the 2021 O’Connor Justice award,” said Benito, former judge of the International Criminal Court. “I am very pleased and truly appreciative to be recognized next to other prominent recipients: Nadia Murad, Anson Chan, Ana Palacio and Navi Pillay, and Presidents Jimmy Carter and FW de Klerk.”

“I have dedicated my professional career to erase inequality and injustice wherever I have occupied positions in my career,” Benito said. “This award is personally validating and an encouragement for me to continue with my work. The law can be a powerful tool to foment change and to protect the human rights and dignity of those who are the most vulnerable.”

Ambassador Clint Williamson, senior director for international rule of law and security at the McCain Institute for International Leadership and ASU Law distinguished professor of practice said, “For the last 25 years, Elizabeth Odio Benito has had an oversized role in building the institutions and creating the jurisprudence that has come to define our modern framework for international justice. She has dedicated her life to bolstering rule of law in her home country of Costa Rica and globally, and her undying commitment to this cause has had a positive impact on countless people around the world.”

“We are living during very challenging times, and our efforts must be redoubled to create a world that is supportive, inclusive and kind,” Benito said. “I accept this award with a pledge to continue working for human rights, the rule of law and democracy.”

Benito will be presented with the O’Connor Justice Prize in a ceremony in early 2022.

Previous recipients of the O’Connor Justice Prize include: