The introduction of a new mathematics journal would not ordinarily make big news. However, the new flagship journal of the Association for Women in Mathematics (AWM), La Matematica, is different.

Like other international peer-reviewed journals, La Matematica aims to feature high-quality research, but even more than that, it seeks to encourage innovation, engagement and interdisciplinary research collaboration. The journal’s goal is to support the flourishing of all mathematicians by adopting equitable practices in STEM (science, technology, engineering and math) publishing.

It also has four female editors-in-chief — a first for any journal in the mathematical sciences — including Donatella Danielli, a professor of mathematics and director of the School of Mathematical and Statistical Sciences at Arizona State University.

“The editors-in-chief are all women, the editorial board is incredibly diverse among various lines, and we have a commitment to equitable practices in publishing; so ‘under the hood,’ it’s very different from any other math journal that you might look at in terms of how we are conceptualizing how we work and what we are trying to do,” said Manes.

“In the end, it is going to be a journal of mathematics, and the final product will look similar. We hope these efforts will mean that who is getting published will be more representative of the mathematics community, and the kinds of mathematics that get published there maybe will look slightly different. The major differences are how we designed things from the ground up.” 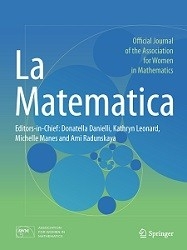 The journal is exploring a number of things unusual in math journals: a doubly anonymous review process, a quick review time — and a goal to be accessible to a wide audience. Any mathematically trained person should be able to understand at least some portions of each article, including the introduction and conclusion. In addition, the journal strongly supports pro-interdisciplinary research and collaborative projects.

“Lots of discoveries are made through cross-pollination, and that can only happen if we can communicate with people outside of our immediate subfield. A positive approach would be for authors to make connections between fields,” said Radunskaya. "Leave the reader wondering, ‘What would happen if XYZ?'”

“There is a tendency for some people in the mathematics community to define ‘math’ as the smallest circle that includes their subject area, and anything that everyone else will agree is math,” said Leonard. “Another way we might appear different is that we have a very big circle of math.”

Danielli said, “Some people think certain areas of mathematics are more important than others, and we are trying to steer away from that vision. We wish to be an inclusive community where different types of results and papers are also being considered. What we envisioned was just a great place to exchange good ideas in mathematics.”

The editors encourage survey articles on current trends that appeal to a wide range of readers. If authors have an idea for a paper where the mathematics are not necessarily new but used in novel ways — for example, to support underserved communities — that is another type of paper the editors would like to see.

Danielli encourages authors to submit their work to La Matematica.

“The only way for this journal to achieve what we aspire to do is if the mathematical community is receptive to what we are doing and thus sustains us in our efforts. Without contributions to La Matematica, the journal will cease to exist or not be relevant. That’s why we are trying to promote it as much as we can. Spread the word around. If you think this is the right place for you to submit, maybe some other people who were not aware of the existence of the journal may find it a good avenue for their work as well.”

La Matematica was born out of a partnership already blossoming with Springer, a leading publisher of global research in academia, scientific institutions and corporate R&D departments. Springer had published a highly successful book series with AWM, so the idea of doing a journal was a natural evolution of that relationship.

Kristin Lauter is past president of AWM and founding editor for the AWM Springer book series, and she has served on the editorial board for numerous journals in math and computer science. She is currently director of West Coast labs for Facebook AI Research (FAIR).

“Science is a network of people, and men currently control that network. I felt that it was important to create a publication venue for women which is controlled by women because, despite our best efforts, we are not able to get any reasonable representation on the editorial boards of mathematical journals controlled by men,” said Lauter.

“Mathematics is a scientific endeavor, with a history reaching back many centuries. For much of that time, there was zero representation of women in the profession. That is a huge barrier to overcome, given that we are half of the population of the world.

“Given the historical context of the profession, we need to proactively create mechanisms to validate the credibility and authority of women mathematicians, and to shine a light on their work.”

“We spent a lot of time researching equitable practices in publishing, and several of the research articles we read talked about this homophilic interaction of identity of editors and reviewers and acceptance rates,” said Manes. “If the editors are men, men have higher acceptance rates. If the editors are primarily white, then white researchers have higher acceptance rates. There is nationality, there is all sorts of strata that you can think about, and if the editors are largely from a common group, then that group is favored in decisions always. It really matters to have diversity in the editorial board. It is not just that our editors-in-chief are all women, but our editorial board is very diverse along lots of lines, and we strove for that quite purposefully.”

Danielli was at the 2019 AWM Research Symposium when Radunskaya and Leonard approached her about the project and asked if she wanted to be involved.

“It was a great opportunity to address some of the inequalities and the disparities that we have seen,” said Danielli. “I think we have all had experiences where we have had papers rejected with a one-line report after maybe a year or more sitting with editors. My philosophy in my career has always been that you don’t get the right to complain too much if you don’t try to solve a problem. And this seemed like the perfect opportunity to try and tackle that, and basically convey my frustrations into something positive.”

Marc Strauss, editorial director for mathematics, North America, said Springer is a huge supporter of the AWM. Springer’s primary reasoning for wanting to forge this collaboration is to better facilitate the dissemination of great research. When asked why mathematicians of all genders should submit their work to the new journal, Strauss explained.

“La Matematica is not a gender-specific journal. For all the years, and today, where all the most prominent journals have two, three or four editors-in-chief or managing editors who are men, do they get questions? ‘Are women allowed to submit? Will submissions from women be considered for publication?’ I think that sort of argument can be turned on its head very quickly, because of gender disparities, as far as the management of scholarly journals in mathematics. Now we've got four women and maybe two-thirds of the board are women, but why is that different than what inversely has been happening on editorial boards of mathematics journals for the last 150 years?”

AWM is celebrating its 50th anniversary, and the first issue of La Matematica is a curated issue of solicited articles from past presidents, prize winners and people who have been a major part of the AWM over the past 50 years.

To celebrate the launch of the journal, there will be a special session at the Joint Mathematics Meetings in 2022. For any questions or feedback about the journal, the editors’ email addresses are on its webpage. Danielli says they’d love to hear from the community.

The spirit of Halloween is creeping into neighborhoods across the country. This year in particular, there’s not only an appetite for candy and treats, but the opportunity to party like it’s 2019, pre-pandemic. An estimated 65% of Americans are planning to celebrate or participate in Halloween activities, up from 58% last year, according to the National Retail Federation. And Halloween spending... 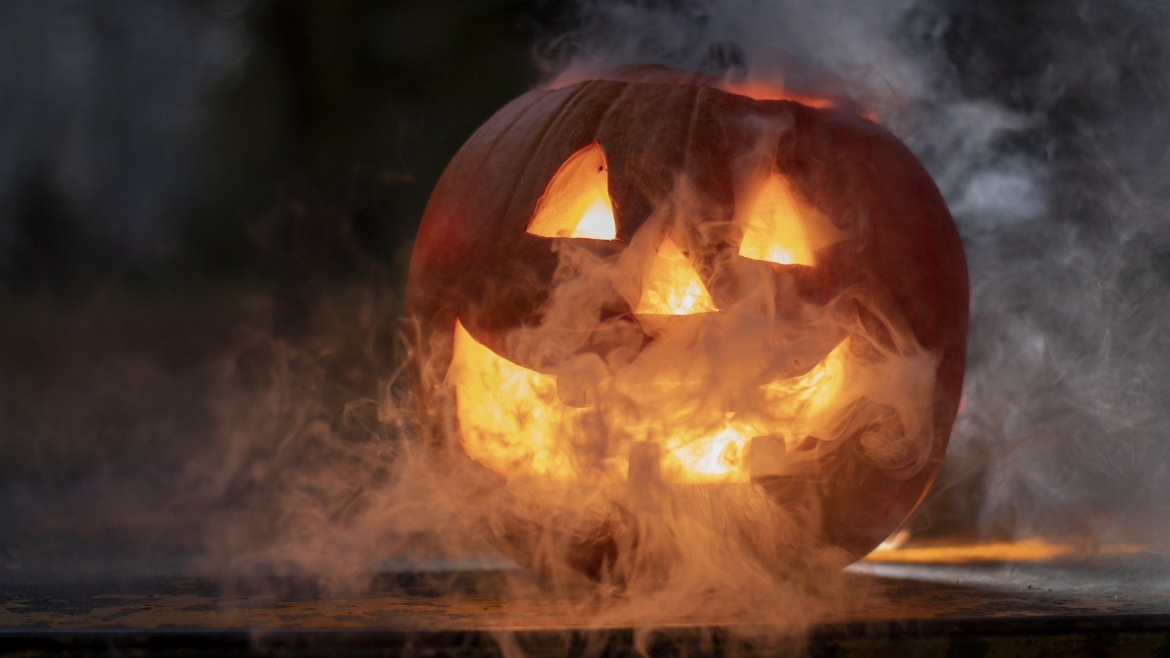 The spirit of Halloween is creeping into neighborhoods across the country. This year in particular, there’s not only an appetite for candy and treats, but the opportunity to party like it’s 2019, pre-pandemic. An estimated 65% of Americans are planning to celebrate or participate in Halloween activities, up from 58% last year, according to the National Retail Federation. And Halloween spending is expected to reach an all-time high.

ASU News spoke with Lee McPheters, a research professor of economics and the director at Arizona State University’s JPMorgan Chase Economic Outlook Center in the W. P. Carey School of Business, about the economic impact of this year's spooky season.

Question: After a lackluster Halloween in 2020, Americans are ready to celebrate. What are they willing to spend, and how will this benefit the retail industry and other areas of our economy?

Answer: Halloween’s economic impact is expected to reach an all-time high in 2021, as witches and goblins put the pandemic behind them and spend $10.1 billion on costumes, treats and partying. Total spending will be up by nearly 20% over the $8 billion in 2020, according to the National Retail Federation.

Here in Arizona, economists at the W. P. Carey School of Business estimate the Halloween impact will be $180 million, extending over a two-month period, and generating approximately 5,000 jobs, not only in retail but also in wholesale and transportation of products for sale. Spending per person is estimated at $103 for the 65% who said they intended to celebrate in some way. In 2020, only 58% said they would celebrate Halloween.

Q: How many people are expected to dress up this Halloween, and what are this year’s costume trends?

A: According to national surveys, 46% of those celebrating will wear a costume or part of a costume, and a surprising 20% of people intend to buy a costume for their pets. Among children, the most frequently mentioned costumes this year are the ever-popular princesses for girls and Spider-Man for boys. For adults, the top costumes planned are witches and vampires. For pets, the most popular costume is a pumpkin.

Q: How much money will people spend on Halloween essentials?

A: Costume spending, the single largest component of Halloween expenditures, is projected to climb to $3.2 billion at the national level, up from $2.6 billion in 2020.