Gregg Leslie, executive director of the First Amendment Clinic at the Sandra Day O’Connor College of Law and a faculty affiliate at the Walter Cronkite School of Journalism and Mass Communication at Arizona State University, has received the Freedom of Information Award from the Arizona Newspapers Association for his advocacy for First Amendment freedoms.

The Freedom of Information Award recognizes journalists, legislators and others who work to preserve free speech and government transparency. Leslie received the award in the non-media category. 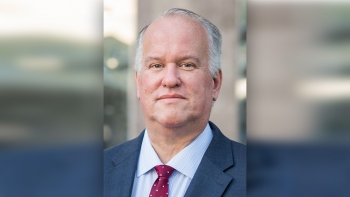 The work done by Leslie and his students has been instrumental to several stories published by the Howard Center for Investigative Journalism at the Cronkite School, which have won some of the highest collegiate journalism awards, including from Investigative Reporters and Editors and the Society of Professional Journalists.

One of Leslie’s most notable cases involved Scott Warren, a humanitarian aid worker who faced felony charges and up to 20 years in prison for aiding immigrants in the southern Arizona community of Ajo.

Leslie and his students successfully argued that sealed court documents related to the case should be made public. It was a substantial victory for the clinic and its media clients, including The Arizona Republic, The New York Times, The Washington Post, CNN and The Associated Press.

The documents outlined the eight-month investigation that led to Warren’s arrest and showed how far the U.S. Border Patrol went to build a case against humanitarian volunteers in southern Arizona.

Leslie previously worked as a staff attorney with the Reporters Committee for Freedom of the Press in Washington, D.C., which provides legal assistance to journalists, and served as the organization’s legal defense director for 17 years.

He also serves on the governing committee of the Communications Law Forum of the American Bar Association and was a member of the ABA’s Fair Trial and Free Press Task Force in 2011. In addition, he served as chairman of the D.C. Bar’s Media Law Committee and Arts, Entertainment, Media & Sports Law Section, and taught media law in Georgetown University’s Master of Professional Studies in Journalism program.

Women's Golf in Second at Stanford

Sun Devil Women's Golf off to a strong start at the Stanford Intercollegiate. ...

Women's Golf in Second at Stanford Sun Devil Women's Golf off to a strong start at the Stanford Intercollegiate.