Computational modeling is a surprising and extremely valuable research tool for developing sustainability practices and policies. It uses computer simulation to analyze and predict socioeconomic and environmental needs based on an infinite combination of factors, allowing researchers to formulate solutions and inform policy decisions that maximize benefits and minimize harm.

To bolster innovation in this discipline, the National Science Foundation (NSF) awarded a $4.2 million grant spanning five years to develop new technology and cyberinfrastructure to help scientists make their models more accessible with a focus on charting a more sustainable future for our planet. Of the total, $3.7 million in grant funding will be allocated to CoMSES.Net (the Network for Computational Modeling in Social and Ecological Sciences), an international community and online science gateway of resources for computational modeling for the study of social and ecological systems, housed at Arizona State University. 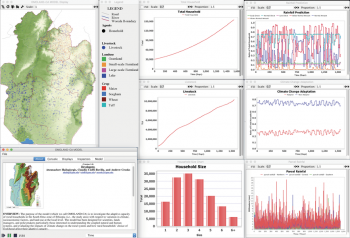 Sample from the CoMSES.Net library of a computational model that simulates a potential future. Download Full Image

The project, “An Integrative Cyberinfrastructure Framework for Next-Generation Modeling Science,” is funded by the NSF Cyberinfrastructure for Sustained Scientific Innovation (CSSI) program. CoMSES.Net plans to utilize funding to develop new cyberinfrastructure and technology to advance the next generation of human-earth systems modeling. Along with this, the team will produce online educational materials that expand knowledge and access to computational modeling technology, for scientists and non-scientists.

Finally, CoMSES.Net will expand its existing online library — where scientists can share their model code with others — by creating models that can be run on multiple computer systems and in the cloud. Users will also get access to the NSF Open Science Grid at ASU, allowing them to create larger models needed for simulating global-scale socioecological systems.

“By integrating innovative technology with training and incentives to engage in best-practice standards, this project will stimulate innovation and diversity in modeling science,” explained Michael Barton, principle investigator of the project and senior global futures scientist at the ASU Julie Ann Wrigley Global Futures Laboratory. “It will let creative researchers build on each other’s work and combine it in new ways to address societal and environmental challenges we have not yet perceived.”

The researchers plan to transform the practice of scientific modeling by encouraging other researchers to begin thinking about how they can create their models to be used by other scientists, educators and policymakers around the world. Additionally, the tools and educational material that will be developed through this initiative will be free and accessible to not only large research institutions, but also smaller colleges, local governments and individuals alike so that any community can discover the power of computational modeling.

With the support of the Community Surface Dynamics Modeling Systems, a geoscience scientific modeling network, and the Consortium of Universities for the Advancement of Hydrologic Science Inc., a hydrology scientific modeling and data network, this grant will foster an evolving ecosystem of diverse, reusable and integrable models that are accessible to anyone in the world.

An Arizona State University professor will be researching ways to predict the safety of domestic violence survivors while their accused partners are awaiting trial.Jill Messing, professor in the School of Social Work, is leading a research team that was awarded a $3.3 million grant to study whether assessments that are used at the scenes of domestic violence incidents may uncover predictive factor... Professor awarded $3.3M to research factors that may predict danger while accused partner is free

An Arizona State University professor will be researching ways to predict the safety of domestic violence survivors while their accused partners are awaiting trial.

Jill Messing, professor in the School of Social Work, is leading a research team that was awarded a $3.3 million grant to study whether assessments that are used at the scenes of domestic violence incidents may uncover predictive factors that can forecast whether the survivor is further endangered after their abuser is arrested but before they are tried.

“We want to see if the person who uses violence is being reported to the criminal legal system for additional domestic violence crimes. And, more importantly, we want to see whether the survivor is actually safe during that period,” said Messing, who is director of the Office of Gender-Based Violence at ASU.

“But we don’t know the prevalence or likelihood of this abuse or how to identify which survivors will remain safe during this period. That is why this research is so important.”

Messing leads the project with Bethany Backes, assistant professor at the University of Central Florida, along with other researchers from across the nation, and their work is supported by Arnold Ventures, a Houston-based philanthropy.

One-third of women in the U.S. experience intimate partner violence, Messing said. In 2020, in Arizona, a total of 102 people were killed by an act of domestic violence, according to the Arizona Coalition to End Sexual & Domestic Violence.

Many jurisdictions use assessments at the scene of a crime as a way to direct victims to services, but those assessments have never been used during the pretrial period, Messing said.

The project also stands out because of its size. The researchers will look at data from 30,000 case files across multiple locations that use the assessments to see whether partners use violence during this period and, in particular, whether violence is used against the same survivor. Then, they’ll interview 600 survivors.

“We’ll talk to them about their experience in their relationship up to the time period when the partner enters the pretrial period,” Messing said. “Then we’ll follow up weekly with brief surveys to understand their safety during this time.”

It’s important that the information come directly from survivors, she said.

“We know that Black and brown individuals are arrested and incarcerated at higher rates than white people, so it is important that we don’t rely solely on data from the legal system,” Messing said. “Legal system data will tell us who is being re-arrested for domestic violence, but it won’t tell us about survivors’ experiences of violence and safety. Relying on re-arrest as a marker of safety will replicate the structural inequalities that are present within our legal system.

“If survivors are not reporting domestic violence to the police — maybe because they are afraid of what will happen to their partner or to themselves — it is important that we understand and account for that context.”

Messing is also working on another research project funded by multiple foundations and federal agencies that is seeking to understand risk factors for domestic violence homicide. The PAIR Studies, which she is co-leading with Jesenia Pizarro-Terrill, associate professor in the School of Criminology and Criminal Justice, and Jacquelyn Campbell of Johns Hopkins University, is replicating a research project done by Campbell in the 1990s to include more diverse locations, additional risk factors and LGBTQ relationships.

The project identifies homicides through data from medical examiners and police departments. Data from six states (including Arizona) will examine individual and policy-level risk factors, such as gun ownership and state-level firearm laws. The original study found that gun ownership is the highest risk factor for intimate partner violence with the odds of lethality increasing by 540%.

“We’re also looking at cases not only where intimate partners were killed, but intimate partner violence-related homicides, such as when an ex-boyfriend kills the new boyfriend, to get that broader sense of risk,” Messing said.

The researchers also will interview the next of kin of the victims of intimate partner homicides, in part to correctly the identify the race of the victim. Indigenous women, for example, are often misclassified. The interviews also will gather information on violence and abuse in the relationship that wasn’t reported to police.

Family members of homicide victims are usually willing to be interviewed, and they provide good details, Messing said.

“They don’t often get to tell their loved one’s story,” she said. “They know they’re doing it for research and to create interventions that may help people in the future. I think that provides a sense of meaning for the person being interviewed.”

It is important to ensure that research is used to make a difference in the lives of people, and that is what the Office of Gender-Based Violence does through promotion of the myPlan app, developed by Messing and colleagues at Johns Hopkins University. The app is a way for people to gauge the health of their relationships and, if needed, to make safety decisions. Users who are affected by intimate partner violence can assess their danger and find local and national resources.

“When someone in an abusive relationship has difficult decisions to make, they have competing priorities,” Messing said. “For example, they may both love their partner and want to stay safe.

“This decision aid walks them through an exercise where they can say, ‘Which of these priorities is more important to me?’ The safety plan will be tailored to their responses.”

The app, which is free, is available in Spanish and in versions for college students and LGBTQ people. New versions are coming out specifically for teenagers, immigrant women and Indigenous women.