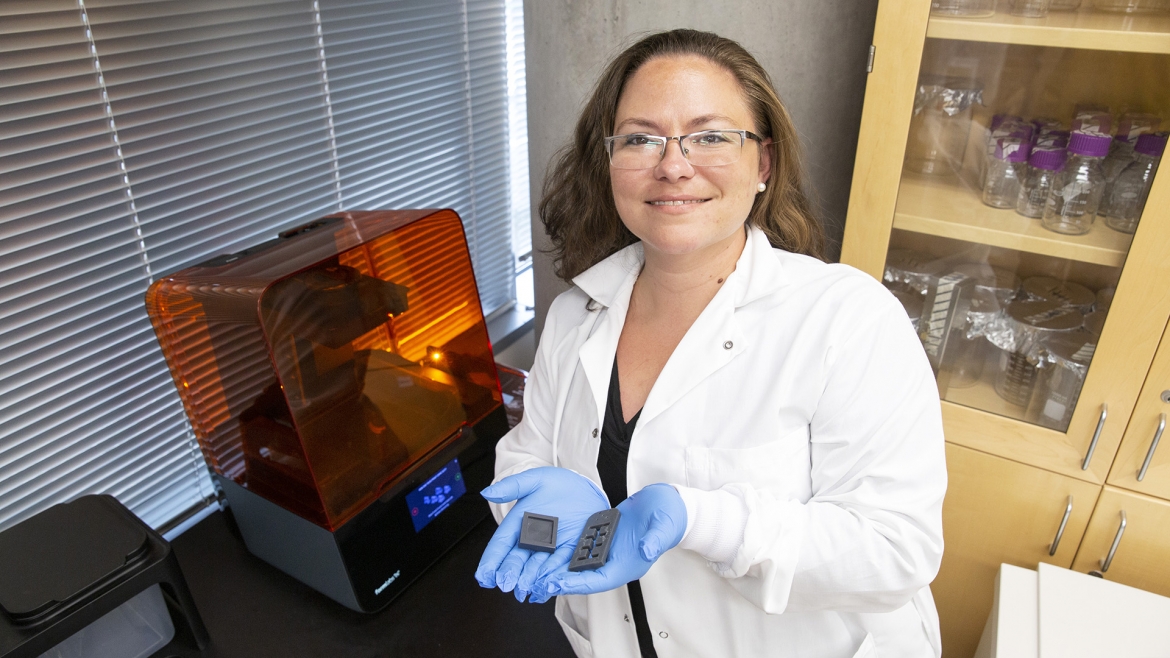 During the last 70 years, transplantation has saved millions of lives around the globe thanks to the development of cutting-edge surgical techniques that can replace malfunctioning organs, tissues and cells. However, immune suppression is needed to prevent a recipient’s immune system from rejecting the donated tissue, and immune suppression comes with a host of serious potential side effects.

Jessica Weaver, an assistant professor of biomedical engineering in the School of Biological and Health Systems Engineering, one of the seven Ira A. Fulton Schools of Engineering at Arizona State University, is looking to change that.

Weaver and researchers in the Weaver Lab are focused on developing a unique way to make transplantation possible without suppressing the immune system — something that can ultimately reduce the risks associated with transplantation and potentially increase the longevity of transplant recipients’ new organs.

For her novel approach, Weaver has been awarded a 2021 National Institutes of Health Director’s New Innovator Award, which is part of the NIH High-Risk, High-Reward Research program. The awards are given to support biomedical and behavioral researchers who are working on promising techniques to overcome some of the biggest challenges in the field. Overall, the New Innovator Award will provide $1.5 million for direct costs and is split into two multi-year segments.

“The science put forward by this cohort is exceptionally novel and creative and is sure to push at the boundaries of what is known,” said NIH Director Francis S. Collins. “These visionary investigators come from a wide breadth of career stages and show that groundbreaking science can happen at any career level given the right opportunity.” 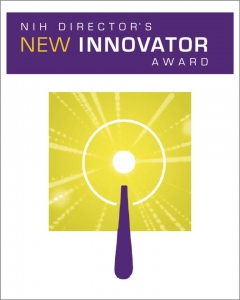 The NIH Director’s New Innovator Award, established in 2007, supports unusually innovative research from early career investigators who are within 10 years of their final degree or clinical residency and have not yet received a research project grant or equivalent NIH grant.

Weaver’s work stands out from previous methods to induce “immune tolerance” against transplanted tissues, which occurs when the body recognizes these foreign tissues as “self” and learns not to attack them.

Over the years, a number of approaches have been attempted — including using some of the signals and mechanisms that cancers use to hide from the immune system. But, as Weaver notes, while these approaches have shown some preclinical efficacy and indications of progress, utilizing cancer mechanisms to hide cells is a less than perfect model.

“The biggest problem with using cancer’s techniques to hide from the immune system is that cancer is your own tissue. So, cancer has a very low bar to meet to hide from your own immune system, compared with foreign tissue like an organ transplant,” said Weaver, who is an expert in biomaterials, drug delivery, and tissue and immune engineering for the development of functional and immune-protected tissue and cell grafts.

“Essentially, the fetus is like an organ transplant to the mother, yet her body does not reject it while it grows. This is particularly true in the case of surrogate pregnancy, where the surrogate mother has no familial relation to the fetus, yet proceeds with a normal pregnancy.”

Weaver points out that it was once believed that pregnancy was a state of immune suppression. However, she says pregnancy actually induces a specific immune tolerance toward the fetal tissue. This is because the placenta both provides nutrients to the growing fetus and actively shields it from the immune system using specially secreted signals.

Weaver’s lab team is exploring the same mechanisms that the placenta uses to hide the developing fetus from the maternal immune system and applying them to cell and tissue transplantation. The end goal is to develop a tolerogenic vaccine using the placenta as a model system. Weaver says this could train the patient’s immune system to accept foreign tissue and eliminate the need for immunosuppressive drugs in transplantation.

To the best of her knowledge, Weaver says no other researchers have attempted to use placental mechanisms to prevent transplant rejection via biomaterials and tissue engineering approaches.

The novel nature of this approach makes it both highly innovative yet also high risk — though Weaver says the limited literature in this area strongly supports her lab’s hypothesis. And as someone whose research is focused on developing both safe and translatable technologies meant to broaden the applicability of cell therapies by eliminating chronic immunosuppression, Weaver is in a prime position to attack this issue.

“My background in cell and tissue engineering and biomaterials makes our lab uniquely suited to pursue this new research direction, and we also benefit from the support of fantastic collaborators in placental biology and immunology, which will maximize the impact of this work,” Weaver said.

She hopes her research will produce a watershed effect and change the way transplantation is approached — something that could affect thousands of transplant recipients each year.

“We hope this work will ultimately lead to a method to eliminate immune suppression in transplantation, potentially benefiting the 30,000 transplant patients per year in the U.S.,” she says.

“Immune tolerance may also improve transplant outcomes and organ longevity, potentially helping to chip away at the ever-growing organ transplant waitlist, which currently lists about 107,000 patients.”

Top photo: Jessica Weaver, an assistant professor in the School of Biological and Health Systems Engineering, has been awarded the National Institutes of Health Director’s New Innovator Award for her work on developing a unique way to make transplantation possible without suppressing the immune system. Photo by Erika Gronek/ASU

The ASU Gospel Choir in the School of Music, Dance and Theatre recently released a recording, “Lift Every Voice and Sing,” with York University Gospel Choir as part of an international collaboration project.The recording, which includes 70 students across academic disciplines, is the first project in the collaborative vision that Nathan De'Shon Myers, assistant professor and director of the AS...

The ASU Gospel Choir in the School of Music, Dance and Theatre recently released a recording, “Lift Every Voice and Sing,” with York University Gospel Choir as part of an international collaboration project.

The recording, which includes 70 students across academic disciplines, is the first project in the collaborative vision that Nathan De'Shon Myers, assistant professor and director of the ASU Gospel Choir, has to connect the choir at Arizona State University with the national and international gospel community. 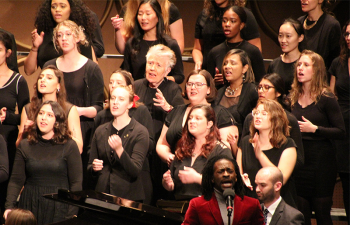 Professor Karen Burke, founding director of the York University Gospel Choir and a 2020 guest artist with the ASU Gospel Choir, reached out to Myers about a collaboration, including visits to each other’s campuses and joint concerts. Because of COVID-19, those plans had to change direction.

“We are very committed to collaborating for the sake of our students, our programs and our communities to show the validity of gospel music, the connectivity that can happen through it and the learning experiences that students can grow through,” Myers said.

Since travel was not allowed, Myers and Burke worked with the leadership teams of both choirs to create a new plan for a virtual collaboration.

To create the recording, the choirs used BandLab, a platform Meyers and ASU students learned about when they all attended the virtual Power Up Gospel Conference, coordinated by Burke for more than 17 years and sponsored by the Toronto Mass Choir.

After a training on BandLab, Myers selected the platform for creating high-quality recordings that could be mixed and mastered at a professional level. For the recording, each choir member individually created and submitted their own videos last spring. Most of the students recorded directly into their laptops with headphones and the laptop as the microphone. They also assisted with the initial mixing and balancing of the tracks.

The ASU choir recorded their tracks first, and then Myers trained the York choir on how to use the BandLab and organized a detailed recording schedule.

Myers mixed the individual sessions together and then mixed within themselves on a new track for the audio. A professional editor then combined the video and audio.

Every student’s recording was captured on the final project.

“Everyone who wanted to be a part of it, who could be a part of it, was a part of it,” Myers said. “It's a great testament to the international impact that gospel music can have and how you can integrate certain technological tools to bridge those gaps between distances as we work to safely participate in what is considered one of the most dangerous art forms (singing) within this time period.”

Myers said the recording project is the beginning of a longer-term partnership and collaboration with York University and that there are plans for more in-person work together, including travel to each other’s campuses and both professors teaching at each other’s universities.

Myers plans to reconnect the ASU Gospel Choir to the two major gospel music conventions in the United States, the Gospel Music Workshop of America and the National Convention of Gospel Choirs and Choruses, to further national connections.

Myers said a larger goal is to create an alliance of gospel choirs and directors to connect around the globe.

“We are looking to simultaneously build community at the local, regional, national and international levels,” Myers said.

At the same time and in addition to performing at the Tempe campus, the ASU choir is connecting with the local community through outreach and volunteering on campus and around town. This semester’s performance schedule also includes the Tempe History Museum on Oct. 8, local Tempe church Dayspring UMC on Oct. 21 and at Hospice of the Valley’s “Light up a Life” event honoring loved ones who transitioned, which will be featured on AZTV in November.