The 2021 Nobel Prize in Physiology or Medicine was awarded on Oct. 3 to David Julius and Ardem Patapoutian "for their discoveries of receptors for temperature and touch." To celebrate, the journal Nature Portfolio presented a collection including further exciting research focused on different aspects of TRP and PIEZO channels, proteins that sense these ubiquitous stimuli.

Included in the collection is a paper published by scientists from Arizona State University's School of Molecular Sciences and the Biodesign Institute in Nature Communications that helps clarify the contributions to an ion channel’s temperature-dependent activation. This in turn should aid in the development of new types of nonaddictive pain therapies. 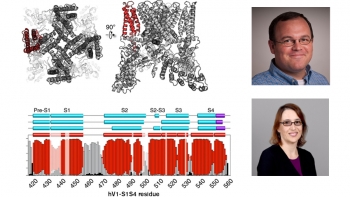 The ability to sense and respond to temperature is fundamental in biology. Ion channels are formed by membrane proteins that allow ions to pass through the otherwise impermeable lipid cell membrane, where they are used as a communication network.

“TRPV1 is an ion channel that is widely expressed in various tissues and plays a variety of roles in biology,” said Associate Professor Wade Van Horn, senior author of the current research. “It is best known for its role as the primary hot sensor in humans; it is the main way that we sense heat in our environment.”

Although important contributions have been made in the investigation of TRPV1 thermosensing, its mechanism has remained elusive.

TRPV1 is also a common taste and pain sensor — think spicy foods and pepper spray. Beyond these roles, it has been implicated in longevity, inflammation, obesity and cancer. For decades it has been a target in the search for new types of nonaddictive pain medication.

“However, to date, a common feature is that while TRPV1 targeting compounds can relieve pain, they also cause off-target effects, especially causing changes in body temperature, which has limited their utility," Van Horn said. "These off-target effects happen because TRPV1 is activated by many distinct stimuli, including ligands (i.e., capsaicin, the main ingredient in pepper spray), heat and protons (acidic pH).” 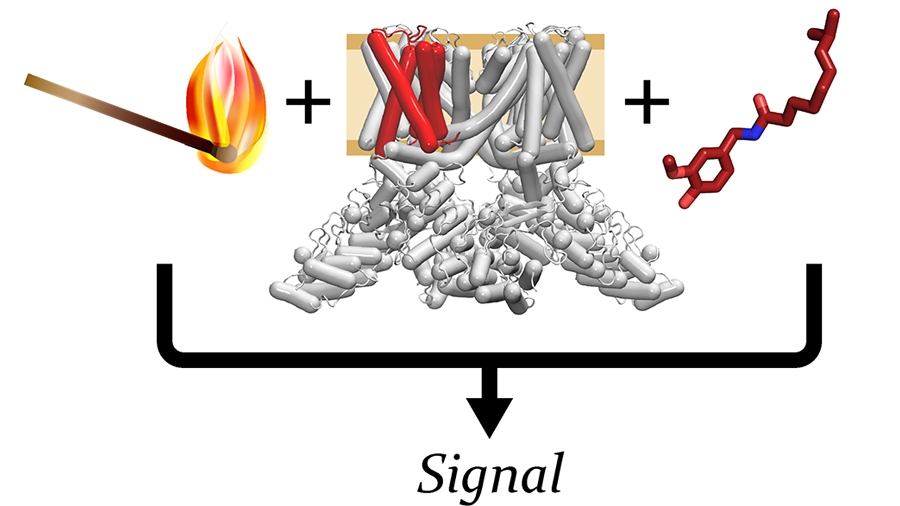 Heat activates the TRPV1 channel, which is in the middle. In red is the domain the authors show to be central to heat activation; the molecule on the right is capsaicin. It is the cognate agonist for TRPV1, and it also is the active ingredient in spicy food and pepper/bear spray. In the end, TRPV1 integrates these stimuli, which sends the signals to the brain for interpretation (i.e., TRPV1 is the receptor that initiates signal transduction). Image courtesy of Wade Van Horn

Also particularly limiting is the uncertainty about the mechanisms that underlie temperature-sensing and how the different activation mechanisms are linked together.

This study used a variety of techniques, from cellular to atomic in nature, to investigate the domain of TRPV1 that is key to its ligand activation.

Van Horn explains that this work identifies for the first time, both functionally and thermodynamically, that a particular region of TRPV1 is crucial to heat activation. The team proposes, and provides experimental validation for, the heat activation mechanism and details a number of structural changes that happen as the temperature is changed.

This study provides a framework that the team anticipates will be foundational for future studies to further refine how we sense high temperatures and, importantly, how we can distinguish and target specific activation mechanisms that should promote the development of new types of nonaddictive pain therapies.

All the interdisciplinary studies were completed at ASU. The team also included Minjoo Kim, Nicholas Sisco and Jacob Hilton, who are currently postdoctoral researchers at Columbia University, Barrow Neurological Institute and the National Institutes of Health, respectively. Camila Montano and Van Horn are also part of the Biodesign Institute Virginia G. Piper Center for Personalized Diagnostics, and Manuel (Mac) Castro is currently a doctoral student at Vanderbilt University.

It was 60 years ago, in 1961, and the space race was on. Soviet cosmonaut Yuri Gagarin became the first man in space, followed weeks later by American astronaut Alan Shepard. President John F. Kennedy challenged the nation to land a man on the moon by the end of the decade.Arizona State University’s opportunity to become part of the nation’s space program began when it purchased the largest pe...

Looking back at history-making chemistry that's out of this world

It was 60 years ago, in 1961, and the space race was on. Soviet cosmonaut Yuri Gagarin became the first man in space, followed weeks later by American astronaut Alan Shepard. President John F. Kennedy challenged the nation to land a man on the moon by the end of the decade.

Arizona State University’s opportunity to become part of the nation’s space program began when it purchased the largest personal meteorite collection at the time from Harvey Nininger. Nininger’s meteorite collection, consisting of samples from nearly 600 localities, was housed and studied at ASU’s newly formed Center for Meteorite Studies, one of the university’s first research institutes. 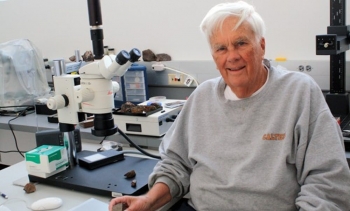 To direct the center, ASU courted a recent PhD graduate from the California Institute of Technology, Carleton Moore. Moore, at the time, was teaching at Wesleyan University in Connecticut. On behalf of ASU, Herbert G. Fales flew to Connecticut to recruit Moore.

Moore recalled, “I was interested in the position, but I wanted to come to Arizona to see the university before accepting. At the time, it was unheard of for prospective faculty to want to come and visit the school, so I don’t think they really knew what to do with me. They gave me a nice tour, and then George Bateman, chair of the division of physical sciences, took me to dinner at the local bowling alley.”

The Center for Meteorite Studies was originally located in the Department of Chemistry (today the School of Molecular Sciences). One of Moore’s first tasks as director was to organize a symposium on meteorite research to celebrate the inauguration of ASU’s new president, G. Homer Durham.

“Durham was a wonderful guy,” Moore said. “He saw that ASU had to grow, so he was very supportive of our research.”

Research at the Center for Meteorite Studies grew throughout the 1960s, as did Moore’s skill and reputation. Prior to the first moon landing in 1969, Moore was accepted by NASA to chemically analyze lunar samples brought back to Earth by the astronauts. A little over 50 years ago, on the evening of Oct. 7, 1969, history was made at ASU in the C-wing of the physical sciences building when Moore, together with colleague Charles Lewis and graduate student Robert Kelly, obtained the first measurements of carbon in a lunar sample.

“It was stressful,” Moore said. “We didn’t know if we’d detect any carbon, so we were all relieved and elated when it worked.”

He and his team would go on to analyze over 200 lunar samples for NASA. 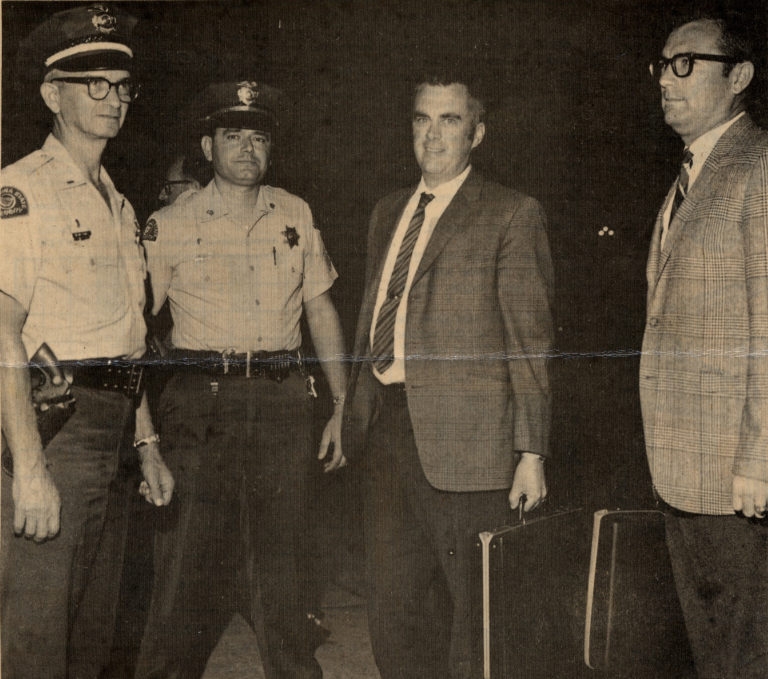 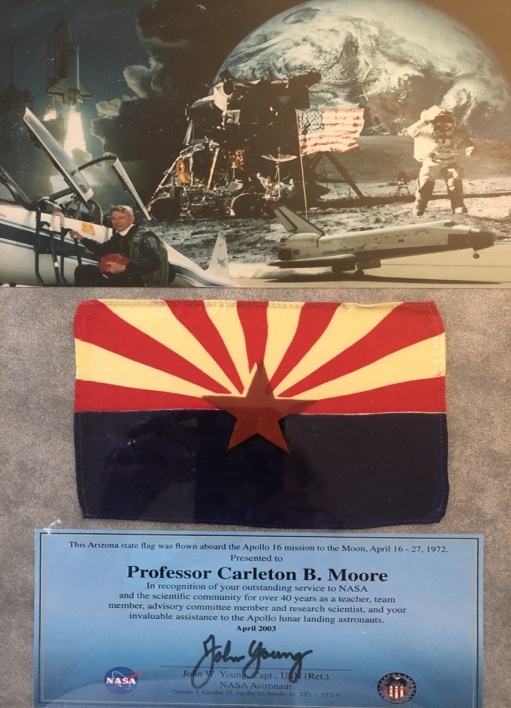 This flag of the state of Arizona was flown aboard the Apollo 16 mission to the moon in 1972 and later presented to Carleton Moore for his service to NASA's Apollo program and the Apollo lunar landing astronauts. Sample of the Murchison meteorite in ASU's Center for Meteorite Studies collection. 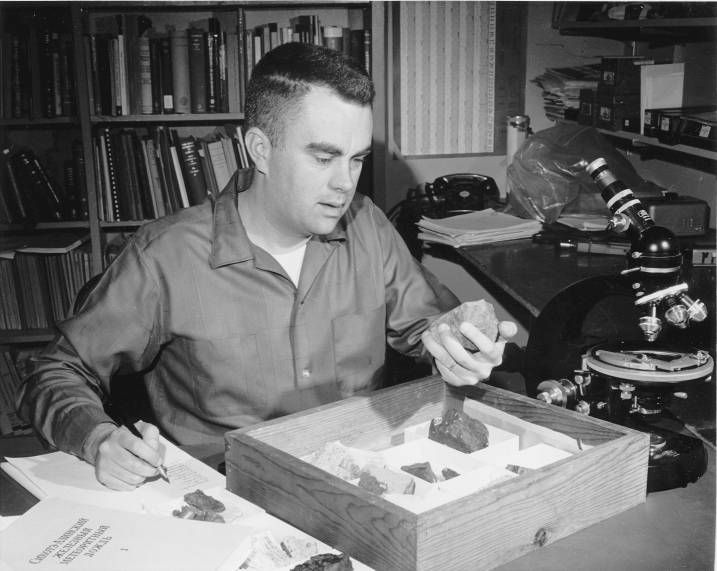 A young Carleton Moore at work in the Center for Meteorite Studies.

Moore was instrumental in another historic and significant first at ASU: two important meteorite falls that occurred in 1969 — the Allende meteorite fell in Mexico, and the Murchison meteorite fell in Australia. Moore obtained samples of both meteorites.

“At the time, there was no definitive measurement of native amino acids in a meteorite,” Moore said. “I sent samples of Murchison to NASA Ames Research Center for analysis, as it was one of the labs tasked with analyzing organics in lunar samples.”

ASU’s Murchison meteorite samples were used to obtain the first unambiguous measurements of extraterrestrial meteorites, as reported in a paper published in the journal Nature, “Evidence for extraterrestrial amino-acids and hydrocarbons in the Murchison meteorite,” for which Moore served as a co-author. This scientific result demonstrated for the first time the presence of complex organic compounds, the precursors of life, outside of Earth.

Together with John Cronin, a colleague in the ASU chemistry department, Moore confirmed the presence of amino acids in Murchison using a different detection technique than had been used at NASA Ames. They also analyzed samples from the Allende meteorite, which did not contain amino acids, using their same technique.

“This was significant because it demonstrated that our analytical techniques were not introducing amino acids into the Murchison samples, strengthening the result that they were of extraterrestrial origin,” Moore said.

Former School of Molecular Sciences Director Ian Gould noted, “It is impossible to overestimate the importance of Carleton being the first to find extraterrestrial amino acids in meteorites. Amino acids are one of the organic chemical structures essential for life as we know it, and his discovery revolutionized the entire field of astrobiology.”

Morton Munk, former chair of the ASU Department of Chemistry, recalled, “I first met Carleton shortly after he arrived at ASU. It took less than five minutes to recognize I was in the presence of someone fired with enthusiasm about things extraterrestrial, meteorites in particular. In Carleton, ASU found the ideal person to exploit the full scientific potential of the Nininger Meteorite Collection. The collection, and Carleton’s early and pioneering studies of meteorites, brought him and ASU international recognition, a parade of distinguished visitors and samples of the initial retrieval of moon rocks for scientific studies — the latter reserved only for those investigators held in the highest regard."

Moore continued to direct ASU’s Center for Meteorite Studies until his retirement in 2003, after 42 years of service as its founding director.

“I’m not sure, but I think I had the longest term of any ASU administrator in the same job in the history of ASU,” Moore speculated.

Director of the School of Earth and Space Exploration Meenakshi Wadhwa served as the director of the Center for Meteorite Studies from 2006 to 2019.

“As the founding director of the Center for Meteorite Studies who served in this role for many decades,” Wadhwa said, “Professor Carleton Moore was hugely influential in establishing the reputation and trajectory of the center. Today, the (Center for Meteorite Studies) is a world-class research institute that houses the largest university-based collection of meteorites.”

School of Molecular Sciences Director Tijana Rajh added, “The understanding of the origins of amino acids in meteorites and their impact on left-handed life on Earth are still the focus of intensive research around the world. It is mind-blowing that it all started here at ASU in the Department of Chemistry. Armed by this heritage, we at the School of Molecular Sciences continue to push the envelope of the research in the areas of astrobiology and biochemistry and bring amino acids, natural and unnatural, to new uses.”

Patrick Kenney, dean of The College of Liberal Arts and Sciences, said, “The School of Molecular Sciences and the School of Earth and Space Exploration are places of global innovation and transformation. This wouldn’t be possible without the contributions of outstanding faculty like Carleton Moore over the years. His decades of cutting-edge thinking helped build the foundation for the exciting work taking place in The College now, and for that we are forever grateful.”