As a city known for scorching heat, a new office has been created within the city of Phoenix to address the growing issue of urban heat, and an ASU professor has been tapped to lead the effort.

David Hondula, associate professor in the School of Geographical Sciences and Urban Planning at Arizona State University, has dedicated his research to understanding urban heat and working toward mitigating the negative impact it can have on people in the community. 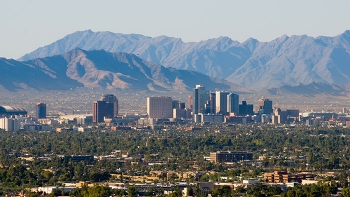 “I have spent more than a decade as an interdisciplinary climate and health scientist working in the academic sector to understand societal risks and vulnerabilities associated with heat and to identify and evaluate promising mitigation and adaptation strategies that can help households and cities overcome those risks,” Hondula said. “The application of research to meet community needs has always been an aspiration for my academic work.”

Hondula will lead the office approved by the Phoenix City Council as part of the 2021–22 budget. The Office of Heat Response & Mitigation will establish a strategic action plan to address the growing hazard of urban heat. The city of Phoenix is the first in the nation to create a publicly funded office focused on heat response. Earlier this year, Miami-Dade County in Florida announced a similar position, funded through a foundation. 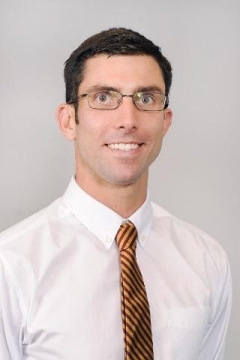 “Addressing the public health and environmental challenges posed by extreme heat is a key priority and a central component of our city's efforts to address climate change," Phoenix Mayor Kate Gallego said in a release from the city.

“Already, Phoenix is recognized as a leader in cooling strategies and support for heat-vulnerable residents, and this investment is reflective of Phoenix's continued commitment to develop innovative solutions to ensure our city's health and livability. I welcome the wealth of knowledge Dr. Hondula brings to this new role. Under his leadership, this office will work across departments and with external partners to build the vision of a cooler, more sustainable Phoenix, and to develop and implement the tangible actions it will take to achieve it."

Using his urban heat expertise in a leadership capacity is nothing new for Hondula, who has also served in a variety of leadership roles in our state and region including the Arizona Heat Resilience Working Group, co-organizer and host for the annual Arizona Extreme Heat Planning Workshop and senior investigator for Arizona's participation in the CDC's Climate-Ready States and Cities Initiative.

Hondula has worked with the city of Phoenix several times over the years in work related to helping the city prepare for the dangers of urban heat, including assisting with the city’s “HeatReady” submission to the Bloomberg Philanthropies’ 2018 Mayors Challenge.

“David is an excellent choice for this important position,” said Sharmistha Bagchi-Sen, director of the School of Geographical Sciences and Urban Planning. “His extensive knowledge of urban heat and unwavering advocacy to assist vulnerable members of our community will serve all of the citizens of Phoenix well. We look forward to seeing his work in action on behalf of the city and are proud to continue to have him as a member of our faculty and school community.”

“The responsibility awaiting the new office, especially its leader, is weighty and humbling," Hondula said. "For some residents, the decisions and actions taken by this office will literally be a matter of life or death.”

He will officially begin his role as director of the Office of Heat Response & Mitigation starting Oct. 4.

Swimming Back in Action with Maroon & Gold Intrasquad

It had been 601 days since the Sun Devils last competed at home, and the swimming program couldn't have been more eager to get back into the lanes in front of their own fans. They kicked off their 2021-22 season with their annual intrasquad Maroon & Gold scrimmage on Friday afternoon. ...

Swimming Back in Action with Maroon & Gold Intrasquad

It had been 601 days since the Sun Devils last competed at home, and the swimming program couldn't have been more eager to get back into the lanes in front of their own fans. They kicked off their 2021-22 season with their annual intrasquad Maroon & Gold scrimmage on Friday afternoon.