How low did it go? Study seeks to settle debate about oxygen in Earth's early atmosphere

Scientists have long debated how much molecular oxygen was in Earth’s early atmosphere. About 2.4 billion years ago, there was a rise in oxygen that transformed Earth’s atmosphere and biosphere, eventually making life like ours possible. This transition is called the “Great Oxidation Event.” But how much oxygen was in the atmosphere before this time?

A team of scientists, led by former Arizona State University doctoral student Aleisha Johnson, has been working to unravel the mystery of how the stage was set for the Great Oxidation Event. Artist’s rendition of what the Earth could have looked like in the Archean Eon, from 4 billion to 2.5 billion years ago. Image by Peter Sawyer/Smithsonian Institution Download Full Image

Using computer modeling, Johnson and her team determined how much oxygen might have been present at Earth's surface before the Great Oxidation Event — and the implications for life on early Earth.

“We all breathe oxygen, and we all live on the only planet known where that is possible,” says Johnson. “With our study, we're one step closer to understanding how that happened — how Earth was able to transition to, and sustain, an oxygen-rich atmosphere.”

The results of their study have been published in Science Advances.

Geoscientists studying the rock record of Earth have found seemingly conflicting evidence about Earth’s early atmosphere. On the one hand, the “fingerprints” of oxygen found after the Great Oxidation Event are mostly missing before that time, leading some scientists to argue that it was absent.

But recent discoveries suggest at least some breakdown of common minerals that react vigorously in the presence of oxygen, and at least some supply to the oceans of chemical elements like molybdenum that accumulate in rivers and oceans when oxygen is present. The conflicting lines of evidence create a long-standing puzzle. 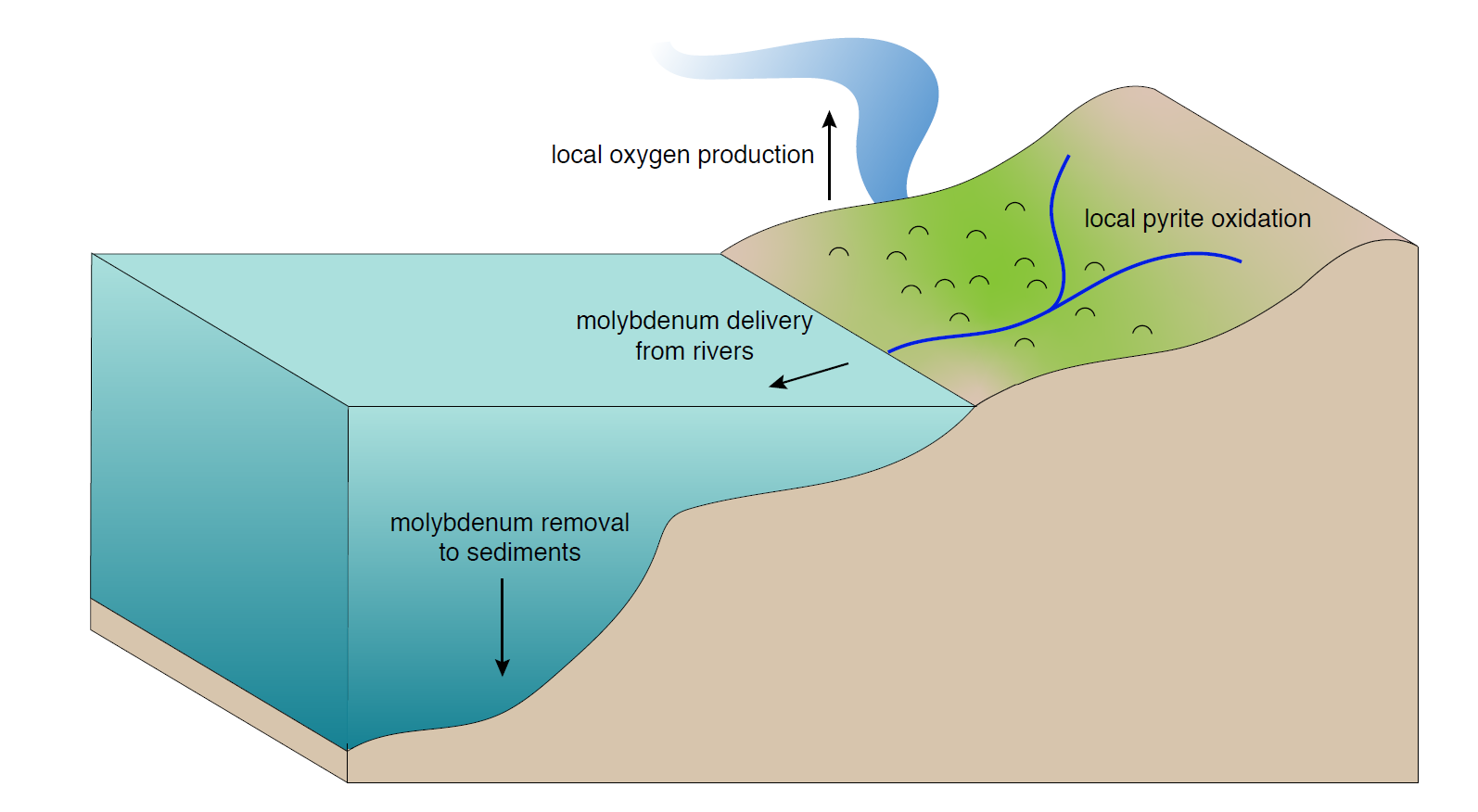 An emergent view of Archean terrestrial oxygen production. Before oxygen filled Earth's atmosphere, it may have been produced in shallow oceans and soils. Shallow soils in proximity to microbial communities (green in figure) may have had oxygen, unlike the overlying atmosphere. As a result, weathering signatures such as molybdenum enrichments in shales predate the Great Oxidation Event. Image by Johnson et al./ASU

“The evidence seemed contradictory, but we knew there must be an explanation,” said Johnson, who is currently a National Science Foundation postdoctoral fellow at the University of Chicago.

To help resolve this puzzle, Johnson and her team wrote a computer model that uses what is known about the environmental chemistry of molybdenum, the reactions of minerals with small amounts of oxygen, and measurements others have made of molybdenum abundances in ancient sedimentary rocks, to figure out the range of oxygen levels that was possible in Earth’s atmosphere before 2.4 billion years ago.

“This computer model helps us quantify how much oxygen is actually needed to produce the chemistry that is visible in the rock record,” said Johnson.

What the team found was that the amount of oxygen needed to explain the molybdenum evidence was so small that it wouldn’t have left many other fingerprints.

“There’s an old saying that ‘absence of evidence is not evidence of absence,’” said study co-author Ariel Anbar, who is a professor at ASU’s  School of Earth and Space Exploration and School of Molecular Sciences. “Until now, our ideas about oxygen being absent before the Great Oxidation Event were mostly shaped by an absence of evidence. Now we have reason to think it was there — just at lower levels than could be detected before.”

The findings support other lines of evidence suggesting that oxygen was being produced, possibly by biology, long before the Great Oxidation Event. That, in turn, helps scientists in their quest to figure out what changes in the Earth’s systems caused one of the most important transformations in Earth’s history.

“Our hope is that these constraints on ancient atmospheric oxygen help us understand the cause and nature of the Great Oxidation Event. But this isn’t just about Earth history. As we begin to explore Earth-like worlds orbiting other stars, we want to know if oxygen-rich atmospheres like ours are likely to be common or rare. So this research also helps inform the search for life on planets other than our own,” said Johnson.

The additional authors on this study are Chadlin Ostrander of Woods Hole Oceanographic Institution, Stephen Romaniello of the University of Tennessee, Christopher Reinhard of the Georgia Institute of Technology, Allison Greaney of Oak Ridge National Laboratory and Timothy Lyons of the University of California, Riverside.

Departing criminal justice school director looks toward its next triumphs

Only a year and a half have gone by since Jon Gould arrived at Arizona State University, but as he leaves for California, he said the school he has headed is in excellent shape and poised to do even greater things in the near future.Gould, a Foundation Professor who has been director of ASU’s School of Criminology and Criminal Justice since January 2020, will be the new dean of the School of Soc...

Departing criminal justice school director looks toward its next triumphs

Only a year and a half have gone by since Jon Gould arrived at Arizona State University, but as he leaves for California, he said the school he has headed is in excellent shape and poised to do even greater things in the near future.

Gould, a Foundation Professor who has been director of ASU’s School of Criminology and Criminal Justice since January 2020, will be the new dean of the School of Social Ecology at the University of California, Irvine. His last day working at ASU is Oct. 5. Jon Gould, director of the ASU School of Criminology and Criminal Justice, is leaving ASU to lead the School of Social Ecology at the University of California, Irvine. Photo courtesy of ASU Download Full Image

Gould said he was given an unexpected opportunity to apply for what had been for him a dream job.

“I was not looking to leave. I like my colleagues a great deal. I’m sad to be leaving them,” he said. “I had a three- to five-year plan, which today we’re about halfway through at its shortest part.”

Gould said he is leaving a school that “is in a really good spot right now”:

Gould praised the dedication of the School of Criminology and Criminal Justice faculty and staff as having significantly contributed to these accomplishments.

“These are hard-working folks who are pleasant, to boot,” he said.

Gould said he devoted major attention to five areas during his ASU tenure that he believes will all continue to come to fruition:

Watts College of Public Service and Community Solutions Interim Dean and President’s Professor Cynthia Lietz said she is grateful for Gould’s steady leadership during the pandemic.

“Despite the challenges faced over the past two years, the school rose in the rankings and was able to recruit and diversify its faculty,” Lietz said. “We were fortunate to have Director Gould in this role during this important time. I wish him all the best in his new role and know he will remain a friend to Watts College.”

Former School of Criminology and Criminal Justice Director Cassia Spohn, who was director immediately before Gould, is serving as interim director while a search is underway for a permanent successor.

Gould said the challenge for the faculty and their new director is to pick up those initiatives and see them through.

“We planted seeds, the shoots are starting to come up. I see the faculty now cultivating the crops,” he said.

“This place is really poised to make an indelible mark, with the nation’s attention to criminal justice reform and imagining what the (criminal justice) system should be. We have leaders here asking those questions and engaging themselves for reform. The school should be relevant in that debate.”

The School of Criminology and Criminal Justice has benefited from a broader interdisciplinary approach, he said, as its faculty members have been engaging with colleagues in psychology, sociology, social work, law and public health, extending the reach of their own work. His successor has the opportunity to build on that momentum, Gould said.

“I will watch all of this with both pride and worry as I try to lead one of the school’s competitors,” he quipped.

Gould said he believes ASU has been a leader in the expansion of the criminology field. Those in the field are now reimagining what justice means, he said, “both substantively and procedurally, about how society must respond to achieve justice.”

He said he believes the school will continue to do the same.

Gould said although he is excited about his new position, he will be taking with him many fond and powerful memories of his time at ASU.

“I’ve not worked with a group of people who combine smarts, hard work and kindness as I have here at ASU. It is very difficult to think about leaving a group like that,” he said.

Gould said he and his wife will retain their home in Phoenix, so he plans to return often.

“While I’m losing these folks as colleagues,” he said, “I hope to keep them as friends.”