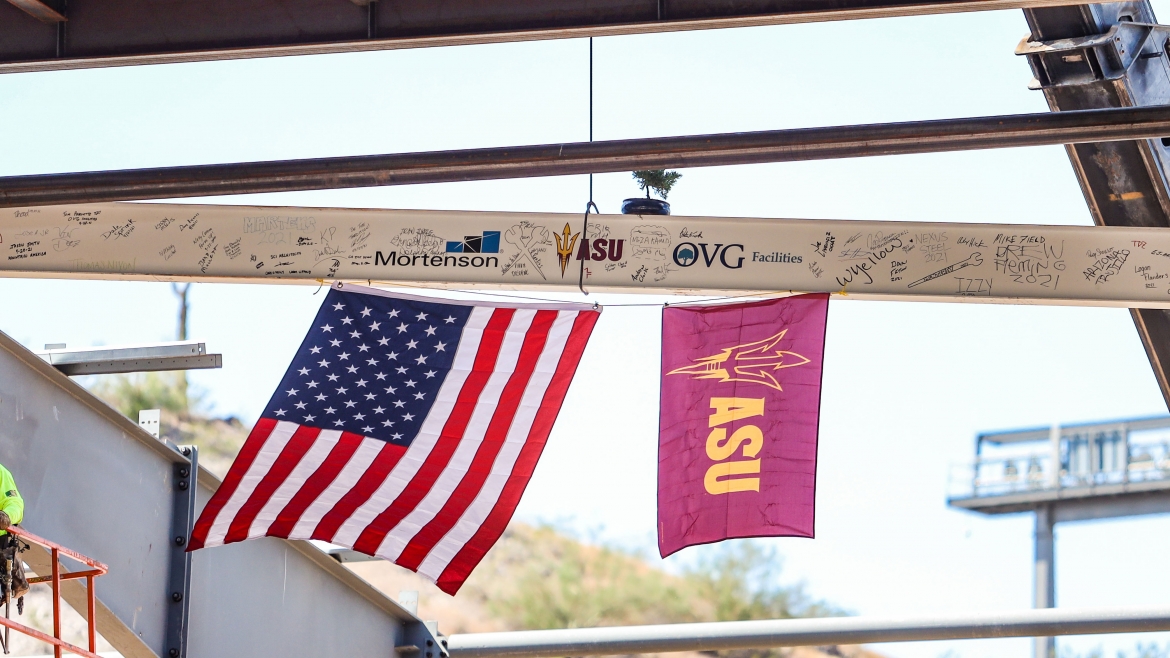 Topping out highlights the momentum on ASU Multi-Purpose Arena

Arizona State University and Sun Devil Athletics, in partnership with Mortenson and Oak View Group, hosted a “topping out” ceremony Tuesday to commemorate the last beam set in place on top of the new Multi-Purpose Arena on the Tempe campus. Set to open in late 2022, the new arena will host university and community events and serve as the future home for Sun Devil men's ice hockey, wrestling and women's gymnastics.

Located in the Novus Innovation Corridor, the arena’s steel structure was topped out, completing the final placement of 1,100 tons of steel. In addition, 6,980 yards of concrete have been poured since the project broke ground earlier this year.

The ceremony recognized the major construction milestone by placing a tree and flags atop the last structural beam that was lifted into place, a tradition acknowledging the successful partnership and project progress to date. Having worked more than 124,892 hours since groundbreaking without a single recordable injury, workers were recognized for their commitment to a safe project site.

"The Multi-Purpose Arena will be a very important piece of the Novus Innovation Corridor — a 'live, work, play' community that will span more than 10 million square feet," said Morgan R. Olsen, ASU executive vice president, treasurer and chief financial officer. "Sun Devils can cheer on ASU athletes in the arena housed in this sustainable, pedestrian-friendly, mixed-use development that provides community resources and economic value to the region. We're pleased that Mortenson and Oak View Group have partnered with us on this exciting arena project."

Ben Goetter, vice president, general manager at Mortenson, said, “This is truly an exciting time and an amazing milestone to celebrate in partnership with Arizona State University and all of our trade partners who are bringing this world-class facility to life. The topping out is always a rewarding moment to acknowledge all of the hard work and pay tribute to the team’s commitment to ensuring everyone goes home safely each day. We are excited to continue this momentum and look forward to seeing this transformational project complete next year.” 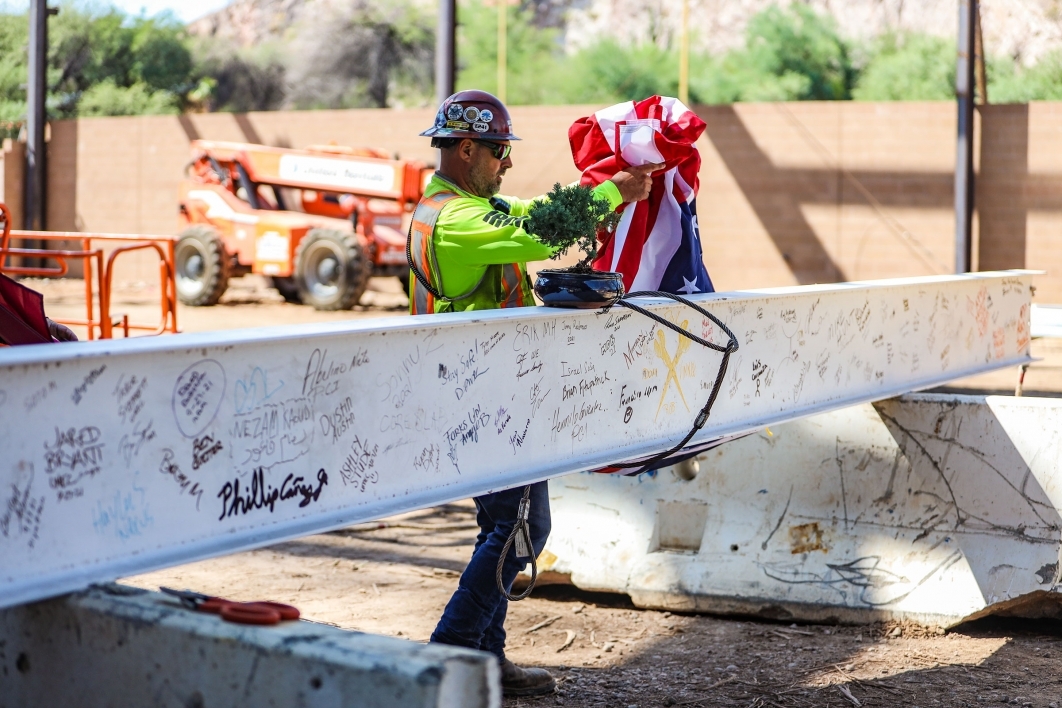 A construction worker secures a U.S. flag to the final beam, covered in signatures, at Tuesday's "topping out" ceremony for the ASU Multi-Purpose Arena in Tempe. 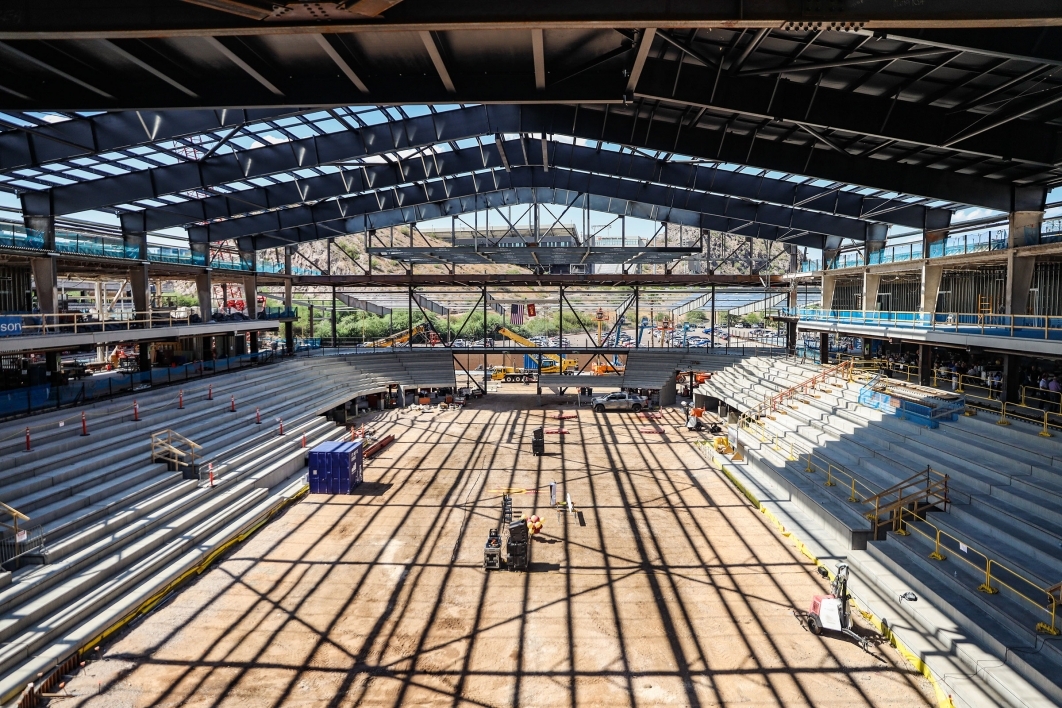 The new arena will host university and community events and serve as the future home for Sun Devil men's ice hockey, wrestling and women's gymnastics. 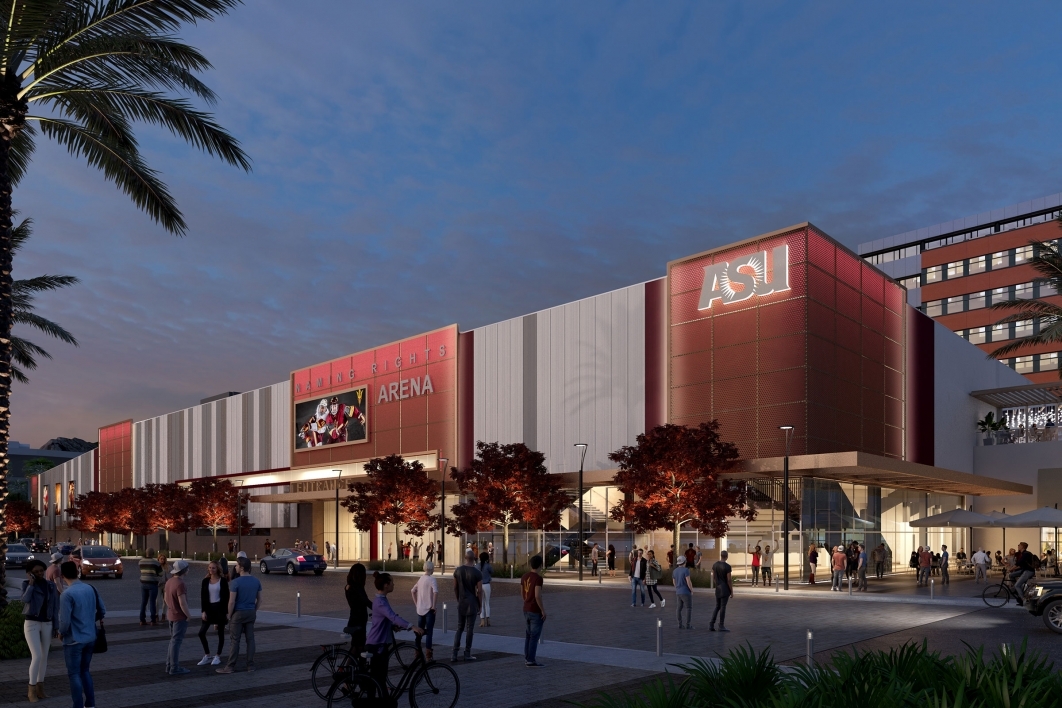 The 5,000-seat arena, which also includes an adjacent community ice rink, will serve as a public venue for the university and community to host concerts, conferences, youth competitions, educational opportunities and more.

Oak View Group Facilities Chairman Peter Luukko said, “We look forward to bringing top-quality live entertainment and attractions to the new Multi-purpose Arena that will attract visitors to Tempe and unite the ASU community. With today’s milestone we move a little closer to that  electrifying feeling of what it will be like inside the new ASU Multi-Purpose Arena and the future home of ASU Athletics.”

In addition to housing Sun Devil Athletics' events and competitions, the 5,000-seat arena, which also includes an adjacent community ice rink, will serve as a public venue for the university and community to host concerts, conferences, youth competitions, educational opportunities and more. The arena will feature a variety of luxury suites, group suites and a large club lounge, along with premium seating, a 942-seat student section and more than 8,000 square feet of state-of-the-art locker rooms, weight rooms and office space.

Some additional facts about the project and construction team on site:

Mortenson is providing development services and is the design-builder, with SCI Architects, the designer. Oak View Group will manage and operate the arena.

To see the construction progress of the new Multi-Purpose Arena, fans can view time-lapse videos and a livestream of the site here.

Top photo: The final beam is hoisted into the new Multi-Purpos Arena at the "topping out" ceremony. Photo by Sun Devil Athletics

New developmental psychology work has upended decades of research suggesting that children as young as 4 years old possess theory of mind.Having theory of mind means understanding how others think, including the ability of someone else to have a false belief.In a famous theory-of-mind experiment that includes false beliefs, children watch scenes involving a character named Maxi, his mother and a c...

Having theory of mind means understanding how others think, including the ability of someone else to have a false belief. 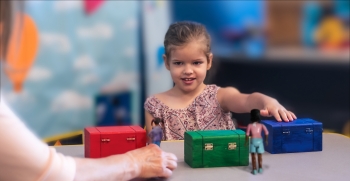 In a theory-of-mind experiment, a child decides whether a character named Maxi will look for the chocolate bar in the blue, red or green box after he has left the room and the chocolate was moved. When there are two possible locations of the chocolate bar, children can answer correctly without understanding how other people think. When there are more than two locations, children must understand how Maxi can have a false belief to answer correctly. Research shows that children do not reliably understand others’ false beliefs until they are 6 or 7 years old. Photo by Robert Ewing/ASU Download Full Image

By 4 years old, children can answer correctly: Maxi will look in the blue box.

But do young children really understand that because Maxi did not see his mother move the chocolate, he falsely believes it is still in the blue box?

The answer is no, according to William Fabricius, associate professor of psychology at Arizona State University. For more than a decade, Fabricius and his collaborators have carried out new experiments and have also analyzed previous experiments that collectively show children do not actually understand false beliefs until they are 6 or 7 years old.

This work was published in Monographs of the Society for Research in Child Development on Sept. 28.

“When we overestimate what young children understand about the mind, and thus how others think, we can expect too much from them in terms of social behavior or performance in school,” said Fabricius, who is the lead author of the paper.

One of the first ways the research team tested what children actually understand about Maxi’s false belief was to add a third possible location of the chocolate bar.

“When there are only two locations, 4- and 5-year-old children can answer correctly without truly understanding that Maxi has a false belief about the location of the chocolate bar,” Fabricius said. “Adding a third location results in them guessing at chance between the two empty locations. Because young children can pass the two-option false-belief task without understanding Maxi’s thought processes, this experiment does not test theory of mind.”

The random choices children make when there are three possible locations of the chocolate bar suggest they rely on their rudimentary understanding of seeing and knowing. This research team has named this process “perceptual access reasoning.”

Children use perceptual access reasoning in the following way:

What happens when Maxi has a true belief, and his mother leaves the chocolate bar alone

Another way the research team tested what young children understand about others’ thoughts was to have the chocolate bar remain where Maxi put it. When Maxi returns, he has a true belief about where the chocolate is.

Even with just two options – the blue and green boxes – young children fail the true-belief task. They incorrectly answer that Maxi will make the wrong choice and look in the green box.

“Perceptual access reasoning users have an immature concept of knowing as tied to the present situation, and do not yet understand that people have memories that persist across situations. They do not understand that Maxi might remember putting the chocolate bar into the blue box,” Fabricius said. “The evidence from this series of experiments is consistent that children do not understand mental representation until they are 6 or 7 years old.

The finding that young children do not understand true or false beliefs and instead rely on perceptual access reasoning is relevant for how they are taught.

“There are strong correlations between theory of mind and a child’s ability to share, be socially appropriate and be able to problem solve and plan,” said Anne Kupfer, director of ASU’s Child Study Lab and co-author of the Monograph paper.

The lab partners with developmental psychology faculty to put research findings into practice and has implemented the findings from the Monograph paper into its preschool curriculum.

“It is important for educators to know at what age a child can finally realize that how they feel, how they think or what they want are not necessarily what everyone else feels, thinks or wants,” Kupfer said.

Sharing a toy is a common situation that requires lab staff to leverage how young children use perceptual access reasoning. Kupfer described a scenario in which a child wants a toy, but another classmate is playing with it. The child takes the toy and because they are happy holding the toy, they think everyone is happy. But the child who just lost the toy starts to cry, and the child who took the toy is puzzled.

“That’s where we come in. In this situation we narrate what is happening and role model responses that are based on what the kids understand from perceptual access reasoning,” Kupfer said. “We say to the child who is crying, ‘I can see you are upset and saw that Johnny took the toy away from you. Is that why you are upset?’ We then role model and ask the crying child to tell Johnny why they are upset, because he took their toy. Then we direct Johnny to look at the sad child’s face and say, ‘She just told you she is upset. Why is she upset?’ Johnny can then answer, ‘Because I took her toy.’”

This example demonstrates how educators can help children learn about others’ mental representations. The child who took the toy begins to understand why they feel happy but the other child does not — a precursor to having theory of mind.

In addition to Fabricius and Kupfer, the research team consisted of Christopher Gonzales, who graduated with his doctorate in psychology from ASU and is now at the University of California, Davis; Annelise Pesch of Temple University; Amy Weimer of Texas State University; John Pugliese of California State University, Sacramento; Kathleen Carroll of STARS, Student Therapy Inc.; Rebecca Bolnick of Kyrene School District; Nancy Eisenberg of the ASU Department of Psychology; and Tracy Spinrad of the T. Denny Sanford School of Social and Family Dynamics.

Video courtesy of Society for Research in Child Development