Arizona State University Professor Ariel Anbar has been elected as an American Geophysical Union (AGU) fellow. He joins 59 other individuals in the 2021 Class of Fellows.

Since 1962, the AGU Union Fellows Committee has selected less than 0.1% of members as new fellows. AGU, a nonprofit organization that supports 130,000 enthusiasts to experts worldwide in earth and space sciences, annually recognizes a select number of individuals as part of its honors and recognition program. 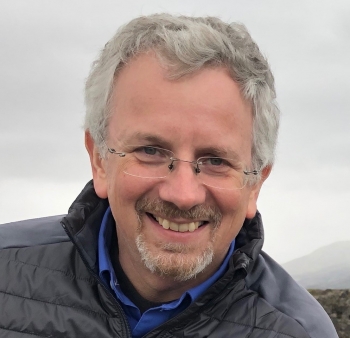 "Throughout his career, Ariel Anbar has made significant contributions to scientific exploration of Earth’s past. We are proud that Professor Anbar is being recognized for his efforts by the American Geophysical Union, and we look forward to his future discoveries as he continues to push beyond the boundaries of astrobiology and biogeosciences,” said Kenro Kusumi, dean of natural sciences in The College of Liberal Arts and Sciences at ASU.

Anbar is a scientist and educator interested in Earth’s past and future as an inhabited world, and the prospects for life beyond. The AGU selected Anbar for this honor in recognition of his outstanding achievements and contributions in pushing forward the frontiers of science. Specifically, Anbar is recognized for developing novel biogeochemical methods that enabled studies of Earth’s earliest life and its relationships with the co-evolving environment.

“Professor Anbar is a world leader in isotope geochemistry, who has made important contributions towards understanding Earth’s past,” said School of Earth and Space Exploration Director Meenakshi Wadhwa. “What’s unique about him, though, is that not only does he care about excellence in his science, but he also cares just as deeply about advancing societal good through innovative technology-enhanced approaches, whether they be applied to education or to sustainability. I’m proud to have him as a colleague.”

“This is a humbling honor,” Anbar said. “Early in my career, I took some big professional risks and — like so many young scientists — hit some rocky patches that made me question my future in the field. It goes to show that risk-taking and perseverance can pay off. I hope that's a lesson that today's younger scientists will take away."

Anbar is an ASU President’s Professor, a Howard Hughes Medical Institute Professor and a Global Futures scientist in ASU’s Julie Ann Wrigley Global Futures Laboratory, and he is on the faculty of the School of Earth and Space Exploration and the School of Molecular Sciences. Anbar also directs ASU’s Center for Education Through Exploration, which is reinventing digital learning around curiosity, exploration and discovery.

“Ariel Anbar and his group have published over 175 refereed papers on topics ranging from the origins of Earth’s atmosphere to detecting life on other worlds,” said Tijana Rajh, director of the School of Molecular Sciences. “It is extremely fitting that Ariel has been selected to join this prestigious group of AGU fellows.”

AGU will formally recognize this year’s recipients during the AGU fall meeting Dec. 13–17 in New Orleans and online. This celebration is a chance for AGU’s community to recognize the outstanding work of colleagues and be inspired by their accomplishments and stories.

The Sun Devil Football program is back on the road this weekend for a key Pac-12 South tilt against the #20 UCLA Bruins on Saturday, Oct. 2 at the Rose Bowl in Pasadena. ... The Sun Devil Football program is back on the road this weekend for a key Pac-12 South tilt against the #20 UCLA Bruins on Saturday, Oct. 2 at the Rose Bowl in Pasadena.