Two-year event and editorial series will launch in October 2021

Zócalo Public Square, a creative unit of Arizona State University, is honored to be the recipient of a grant of $250,000 from the Andrew W. Mellon Foundation to support a two-year event and editorial series exploring the question, “How should societies remember their sins?”

The Mellon Foundation has awarded grants since 1969 to support a variety of initiatives centered on strengthening the humanities, arts and higher education. This grant, from the foundation’s Humanities in Place program, is its first to Zócalo Public Square.

“This project is a major opportunity for Zócalo and Arizona State University to support our communities in facilitating a discussion that explores the problems of the past, and their legacies in the present, to create transformative change,” said Mi-Ai Parrish, managing director of ASU Media Enterprise.

From October 2021 to September 2023, Zócalo will publish original, multidisciplinary work, including essays, photography, illustrations and poetry. Participants will include scholars, artists and others whose personal histories intersect with the question; the project also will highlight creators from a range of underrepresented groups. By providing a kaleidoscopic view of how America has remembered its sins, the project aims to reimagine the subject’s future.

“For 18 years, Zócalo Public Square has dared to ask provocative questions that make people stop, think and come together. With this funding, the Andrew W. Mellon Foundation is enabling Zócalo to challenge our audiences and our contributors to explore the difficult work of remembrance and reconciliation at the community and the national level — with a sense of hope and healing,” said Moira Shourie, executive director of Zócalo.

The grant also supports a four-part event series featuring top scholars and practitioners in the field of public memory and monuments convening to discuss their work and perspectives. Two events will be presented live in Los Angeles, followed by two events in historically significant locations, and all will be accessible in an interactive format for virtual audiences.

Founded in Los Angeles in 2003, Zócalo Public Square is an ASU Knowledge Enterprise. Zócalo connects people to ideas and to one another by examining essential questions in an accessible, broad-minded and democratic spirit. It pursues its mission by convening events and by publishing ideas journalism syndicated to 290 media outlets worldwide.

The materials and methods behind multimedia artist Marco Albarran’s work are as diverse as his own story. He creates linocut print pieces in black and white with Indigenous mask imagery. One of his sculptures was painstakingly constructed over several months. All of the pieces, however, are connected to the Arizona State University staff member’s personal experiences.“I’m a binational, mu...

Tempe campus , The College of Liberal Arts and Sciences , Department of English , Arts and Entertainment

The materials and methods behind multimedia artist Marco Albarran’s work are as diverse as his own story.

He creates linocut print pieces in black and white with Indigenous mask imagery. One of his sculptures was painstakingly constructed over several months. All of the pieces, however, are connected to the Arizona State University staff member’s personal experiences. Marco Albarran poses with his mixed-media piece “Mayahuel,” which is on display at the Mesa Contemporary Arts (MCA) Museum. Photo courtesy of the MCA Museum at Mesa Arts Center Download Full Image

“I’m a binational, multicultural individual that has gone through a series of related experiences — some of those experiences eventually are transformed into art creations in some way or form,'' Albarran said.

Some of Albarran’s creations are on display this fall at the Phoenix Airport Museum and the Mesa Arts Center. Albarran, who serves as exhibit developer with the School of Human Evolution and Social Change, uses art to honor his heritage.

Born in Mexico, Albarran migrated with his family to a border town where he lived until moving to the United States in high school. Before moving to Phoenix, he helped his father farm fields after school. He later attended ASU, studying architecture, political science and construction and civil engineering.

The Phoenix Airport Museum “Myth, Legend and Lore” exhibition showcases prints Albarran made using linocut printmaking. Designs are carved into a sheet of linoleum, then inked and printed onto paper.

“The pieces that I’m creating right now are part of the ‘Alt-Face’ series and are specific to the beliefs and ways of celebrating the different regions in Mexico,” Albarran said. “The basic structure of the prints are loosely based on regional-traditional representations of pre-Columbian images or living representations of mixed customs, traditions and cultural ways that are still in use during the various celebrations, dances and ethnographic art done all around Mexico.”

Albarran’s mixed-media piece, “Mayahuel,” is on display at the Mesa Arts Center and is part of the "Divine Paradigm Contemporary Visionary Art" exhibition. It was specifically created for the entrance of the museum and will tie in as part of the Día de los Muertos Festival. Albarran said the piece is inspired by the pre-Columbian deity Mayahuel, who was celebrated around the maguey plant, also known as agave. 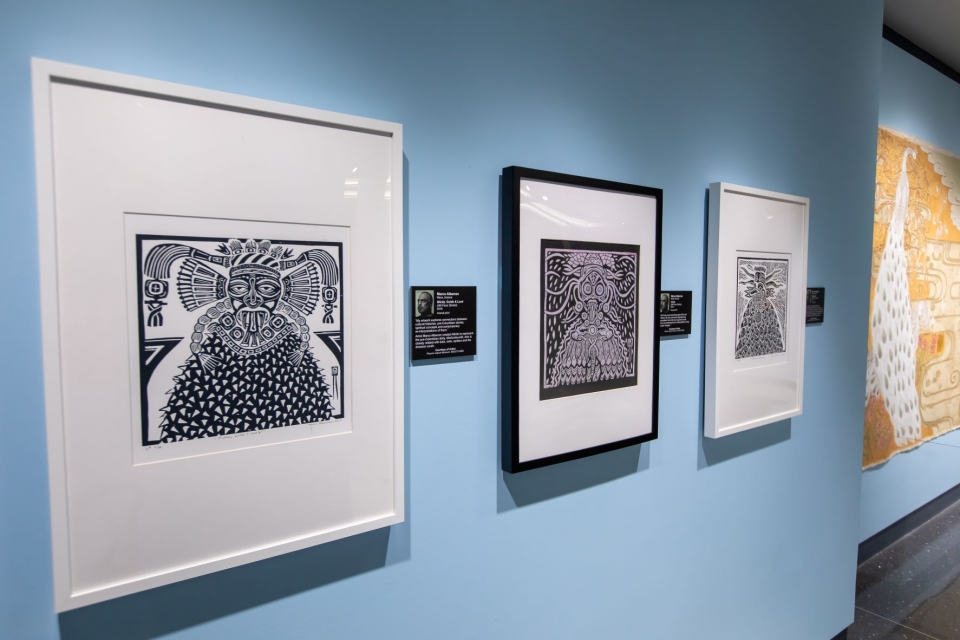 He said the piece has many different historical and cultural layers and can be interpreted by the individual, but he wanted to highlight the ancient uses of the maguey plant before it became commercialized. Albarran said maguey was traditionally a sacred drink used for ceremonial purposes and healing properties.

“Since I was a little kid I grew up doing very traditional family gatherings — and again when I say traditional, I’m talking about Indigenous ways of celebrating life itself,” Albarran said. “But at the same time, I also had the more contemporary, or mestizo, ways, which is that mix of European and Indigenous ways. So when I’m creating art pieces I’m kind of remembering those things as I work on each piece.”

As the exhibit developer in the School of Human Evolution and Social Change at ASU, he works with faculty to display their research in the school’s Innovation Gallery, an exhibition space.

Encouraging and nourishing art within the Chicano and Latino communities has been Albarran’s lifelong work. In the 1990s he worked for the Hispanic Research Center at ASU and also started his own cultural magazine called “Zopilote,” which gained international attention.

The “Myth, Legend and Lore exhibition” at the Phoenix Airport Museum runs through January 2022 and is located in terminal 3 and terminal 4. The Mesa Arts Center’s exhibition, “Divine Paradigm Contemporary Visionary Art,” runs through Nov. 28.