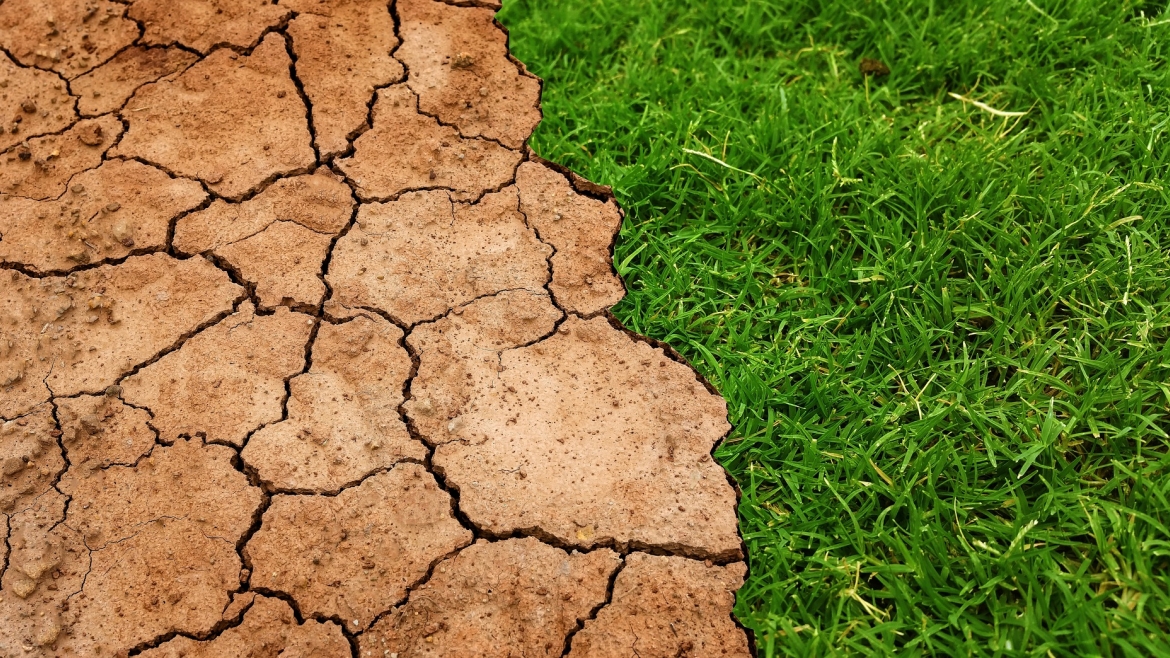 Climate migration is expected to displace more than 200 million people in the next three decades, according to a recent World Bank report.

Refugees are typically those seeking asylum from conflict and persecution, but global warming is starting to change that dynamic.

According to the report, natural disasters, drought, crop failures, pollution and extreme weather conditions will uproot millions from their homelands by 2050. That means countries throughout the world could experience dramatic demographic shifts, changes to labor markets and additional pressure on their natural resources.

Valerie Mueller, an associate professor at Arizona State University’s School of Politics and Global Studies and a senior global futures scientist with the Julie Ann Wrigley Global Futures Laboratory, has spent a considerable amount of time and research on this issue and spoke to ASU News about how this will impact refugees, countries and markets. 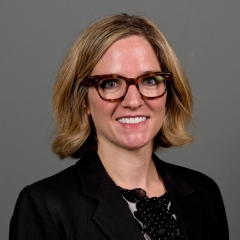 Question: Let’s define what climate migration is for our readers.

Answer: Scholars disagree on what constitutes a climate migrant. Some assume a population at risk of experiencing a major climatic event, e.g., coastal populations in the low-elevation coastal zone, provide a means for projecting the number of future climate migrants. My colleagues and I discuss why this may mislead policymakers, as it ignores private adaptation. Others will think of those who are involuntarily displaced by a natural disaster or climate extreme event, i.e., refugees from Hurricane Katrina. Finally, another group, like myself, like to include voluntary migration decisions, where households with income vulnerable to climate may decide to send a family member abroad or to another location in their home country to earn additional income.

A: Yes. The classic example is the Dust Bowl. The migration around the Dust Bowl period was the result of a variety of climatic and environmental factors that drove many farmers to migrate from the Great Plains to California for work. There are several literary texts inspired by this great migration given the impression it made on people's lives in the U.S. “Four Winds,” a recent literary novel, has been on the New York Times bestsellers list for a while. The author captures the essence of what some climate migrants may face, in terms of the emotional heartbreak of a mother leaving her in-laws to escape the pollution that sickens her children, having to find work in a locale saturated with unskilled workers while facing discrimination as an untouchable migrant in receiving communities.

Q: The report states that global warming is exacerbating this issue. If millions come to the United States, especially in the West, are we able to handle the stressors on our natural resources like water and electricity?

A: My familiarity with this issue mainly comes from my perspective of economic livelihoods, climate and migration patterns in Africa. There is a narrative that refugees — albeit induced from climate or political instability — are considered exceptional resource degraders. Typically, there are concerns over deforestation around refugee camps because the population density brings pressure for fuel and materials for housing.

In our study, we examined whether refugee camps contribute to environmental degradation. We found that there was a slight change in deforestation, and that mainly was driven by refugees clearing forested land for agricultural production — not for fuel or housing materials. This is likely coming from a few things. Refugee camps often forbid people to work, or the opportunities for refugees to work near the camps are limited. Refugees then try to take matters into their own hands to work and try to take advantage of the farming skills they may have had at home.

Q: What are some of the other issues that you anticipate might arise as a result of massive migration to the U.S. and other countries?

A: We often worry about labor markets. For example, in my study on the Venezuela crisis, we found that the influx of Venezuelan refugees dampened the wages of native Colombians in the short term. Another study that I worked on evaluating the impact of flood-induced migration in Nepal also had a similar effect. This is not always the case, however. It really depends on where the migrants are going to and how much they increase the local population. In places with labor shortages, the local economy might benefit from immigration. Immigrants also bring new consumers to an economic area, increasing the demand for goods and services. There have also been studies that show that having enclaves of migrants in some locations can stimulate trade and create new types of jobs.

Q: I recently watched a CNN documentary where Duluth, Minnesota, has been pegged as the best place to live in the United States in terms of future climate change. Do you anticipate U.S. citizens also migrating elsewhere?

A: I think U.S. citizens will voluntarily migrate elsewhere if the conditions at work become more flexible. But most people that do not have remote-working or flexible-working arrangements will be attracted to places where they can find a job for a decent living. If climate affects firm productivity, then companies might relocate and workers might join them. Right now, the people that are moving based on climate amenities, in contrast to those displaced by events like Hurricane Katrina, have this luxury. Their income is not dependent on the place they live — e.g., retirees, wealthy foreign nationals looking for a place to live with better amenities — or they have more occupational mobility in terms of skills.

As climate change increases the prevalence of disasters, these things might change. For example, public and private insurance can protect the housing of people who live in risky areas, such as those susceptible to sea-level rise and tidal flooding. If exposure to flooding becomes worse, then it may not be sustainable to offer insurance packages to people living in these areas. Already we are seeing housing prices stabilize in coastal areas relative to non-coastal areas in Florida. This is a signal that markets are starting to internalize risk, but perhaps not enough. I've also shown recently in a study that commuting delays are worsening in Miami. Taken together, if housing markets are less attractive and commuting delays from flooding obstruct the flow of goods and services within the locale, or even make the place less desirable to live, then we are likely to see firms, workers and consumers migrating out of these risky areas.

The ASU Alumni Association will be hosting "Sun Devil Stories: Women in Business" on American Business Women’s Day, Sept. 22. Attendees will have the opportunity to hear from an esteemed panel of female alumni and authors as they speak on revolutionizing recruitment and customizing organizations' strategic planning processes.As president and CEO of Duffy Group Inc., panelist Kathleen Duffy (‘8...

The ASU Alumni Association will be hosting "Sun Devil Stories: Women in Business" on American Business Women’s Day, Sept. 22. Attendees will have the opportunity to hear from an esteemed panel of female alumni and authors as they speak on revolutionizing recruitment and customizing organizations' strategic planning processes.

As president and CEO of Duffy Group Inc., panelist Kathleen Duffy (‘81 BA) helps individuals find joy in their work and companies discover quality candidates. She developed Recruitment Research, an innovative model which enables Duffy Group to utilize marketplace intelligence, to work as a discrete and transparent partner and deliver the right candidates to organizations. As a result of her successful approach, Duffy wrote the book "Revolutionizing Recruitment: How Recruitment Research is Reshaping the Industry" to help other hiring leaders perfect their recruitment practices. 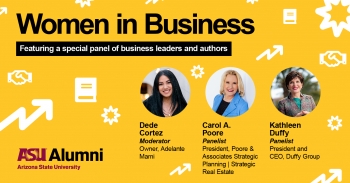 In addition to her role as president, Duffy is involved in business and community endeavors. As a proud Sun Devil alum, she has served as chair of the ASU Alumni Association Board of Directors and National Alumni Council, and currently serves on the ASU Foundation’s President’s Club, the College’s Advisory Board and the Trustees of ASU. Duffy also mentors social entrepreneurs with Seed Spot, an incubator for startups building a product, service or technology that makes the world a better place. She has been named one of the 2019 Most Admired Leaders by the Phoenix Business Journal, the 2018 ATHENA Business Woman of the Year in the private sector, one of the Most Influential Women in Arizona by Arizona Business Magazine and a Sun Devil 100 honoree.

Poore served as vice provost of institutional advancement and public affairs at Arizona State University’s West campus from 2002 to 2007, and is now a faculty member at ASU’s School of Public Affairs. She serves as vice chairwoman of the board of directors for the Abrazo Central, Scottsdale and Mesa hospitals; vice chairwoman of Phoenix Community Alliance; and is on the dean’s council for ASU's W. P. Carey School of Business. Poore is also a founding member on a number of ASU boards, including ASU's Downtown Phoenix campus Community Advisory Board, ASU's Greek Alumni Board, and ASU Women and Philanthropy.

Specializing in messaging and branding, event moderator DeDe Cortez (‘16 M. Ed.) owns Adelante Mami, a storytelling marketing firm for the modern-day Latina. Cortez helps empower creatives and entrepreneurs to share their stories through marketing services and courses, a podcast and blog. She is a proud member of Arizona’s Latino community and has collaborated with various Latinx organizations, colleges and small business leaders to advocate for human rights.