On Aug. 15, the Taliban took over the capital city of Afghanistan, Kabul, following the decision from the United States to fully withdraw all military from the country. The withdrawal of U.S. troops officially signaled the end of the 20-year war with Afghanistan, America’s longest.

Since then, a number of Arizona State University’s Center on the Future of War faculty members have been in the news, providing insights on the current situation. The center is a partnership between ASU and New America, a Washington, D.C.-based think tank that explores the changing character of conflict and emerging global security challenges. 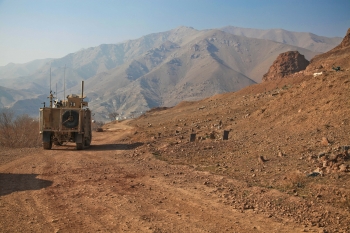 Peter Bergen, center co-director, professor of practice in the School of Politics and Global Studies, CNN national security analyst and vice president of global studies and fellows at New America, noted on CNN that, “If you constantly say publicly, 'We're leaving. We're leaving. We're leaving,' and then you start closing all the bases — the Taliban are not dumb. And the forces opposing the Taliban also then made the calculation; better to live another day.”

Bergen’s latest book, “The Rise and Fall of Osama bin Laden” — which coincidentally was released in early August, just 12 days prior to the Taliban’s takeover of Kabul — details the life of bin Laden, providing “the first reevaluation of the man responsible for precipitating America’s long wars with al-Qaida and its descendants, capturing bin Laden in all the dimensions of his life: as a family man, as a terrorist leader and as a fugitive.” Bergen was also part of a CNN team who interviewed bin Laden in Afghanistan in 1997.

David Kilcullen, counterinsurgency expert and professor of practice in the School of Politics and Global Studies, expressed fear that the Taliban’s return might allow for Afghanistan to once again become a base for jihadists to take advantage of, stating in The Economist, “Everyone else is saying, 'Wow, if those guys can do it, so can we.'”

After the Aug. 26 suicide bombing outside Kabul’s international airport, Candace Rondeaux, director of Future Frontlines at New America and professor of practice in the School of Politics and Global Studies who regularly writes for the World Politics Review, called it “… an indelible stain on the United States’ reputation.”

What does this all mean for women in Afghanistan? Azmat Khan, investigative journalist and professor of practice in the School of Politics and Global Studies, gives insight on the question in an interview with MSNBC: “… acknowledging this huge, enormous cost to incredible people who`ve seen so much progress over the last 20 years, especially women and girls in Kabul in major urban centers, what you often don't hear talked about are the women and girls who live in rural areas.”

Anand Gopal, journalist and assistant research professor in the School of Politics and Global Studies, wrote an extensive piece in The New Yorker, titled “The Other Afghan Women,” where he interviewed dozens of women of all ages, something that Gopal notes is rare, as women in these areas traditionally do not speak to men who are unrelated to them. This allowed him to get a first-hand reflection on the past 20 years to see what living in rural areas was truly like for women, something that has rarely been reported on, as Khan previously noted. Gopal said, “The gains these women experienced during the American War — and have now lost — are staggering, and hard to fathom when considered against the austere hamlets of Helmand: the Afghan parliament had a proportion of women similar to that of the U.S. Congress, and about a quarter of university students were female.”

The future of journalism is also uncertain. Khan spoke on Reliable Sources about that concern, especially as it pertains to rural areas that are already difficult to reach: “I think that news organizations are going to have to learn from health organizations and other NGOs that have operated in those (rural) areas to understand how they have been doing the work they were doing in the past few years, in an effort to try to replicate it, or even perhaps hire from them and train a new generation of journalists … people need to start getting creative about reaching some of those areas that we already don’t hear from enough and are threatened to not hear more from.”

As the U.S. officially left Afghanistan on Aug. 30, ending the 20-year war, Daniel Rothenberg, Center on the Future of War co-director and professor of practice in the School of Politics and Global Studies, spoke with AZ Family, saying, “It’s hard to imagine there would have been any way to leave that would not have been chaotic. But of course what we have witnessed in the last several weeks is painful and tragic, especially for those who have a close connection to the country, whether people who worked there, served in the military, etc.”

Ajit Maan, narrative strategist and professor of practice in the School of Politics and Global Studies, writes in Homeland Security Today about the Pineapple Task Force, explaining that “the Pineapple Task Force … is an organic, leaderless effort by veterans who have come together to honor the promises they made to their Afghan partners and to assist the younger generation of the U.S. military up to the very last minute they were on the ground … The rescue operation has transitioned to a recovery operation, and they remain committed, still, to leave no one behind – dead or alive.”

Gopal, in an interview with MSNBC, spoke on whether there has been a change in the Taliban in the last 20 years. Throughout the years, Gopal has spent time with the Taliban and noted, “The current iteration of the Taliban are quite different. Many of them are people from all walks of life, farmers, shopkeepers, etc., and almost everyone you meet in the Taliban has lost loved ones to drone attacks or to other sorts of crimes. They joined the Taliban not out of some kind of religious fervor but because of revenge. They want revenge against the U.S., against the Afghan government.” Gopal goes on to say that, as a result, their worldview is much more diverse than it was 20 years ago.

On Sept. 8 and 9, ASU’s Center for the Study of Religion and Conflict co-sponsored a two-part panel discussion event with the Center on the Future of War, titled “Freedom and Democracy Since 9/11,” which focused on how the promise and pursuit of freedom and democracy in the United States has changed in the past 20 years. The discussions, titled “Freedom and Democracy at Home” and “Freedom, Democracy, and U.S. Foreign Policy,” came at a time that allowed for further reflection on the recent withdrawal of the U.S. to play a central part of this conversation.

What happens next? In terms of moving forward, Rothenberg stated in an interview with AZ AM Fox 10 News, “Of course no one knows what is going to happen next. Afghans are extraordinarily resilient people, they have gone through so much … but we don’t know what sort of government the new Taliban, if they are the new Taliban, will create.”

After powering through a year or more of remote and hybrid learning due to COVID-19, a significant share of traditional school districts are returning to familiar in-person models this school year. Even so, the advantages of online learning remain clear, particularly in the event of student quarantines.In Cleveland, one forward-thinking network of schools is offering students and their families a ... 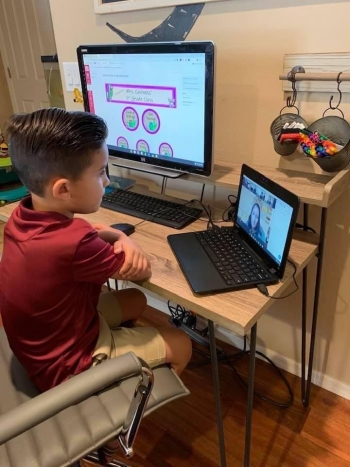