Proteins are the molecular machines that make all living things hum. They stop deadly infections, heal cells, capture energy from the sun and so much more.

Proteins are built by stringing together chemical building blocks called amino acids, according to instructions in an organism’s genome. These strings then “fold up” based on the chemical forces between the amino acids, forming the complex three-dimensional structures needed to perform specific jobs.

Fluorescent proteins have revolutionized our ability to study biological systems. Despite a wealth of fluorescence tools, some fundamental biological processes — like the interactions between proteins and metabolites — remain difficult to study.

Assistant Professor Jeremy Mills and his group in Arizona State University's School of Molecular Sciences and the Center for Molecular Design and Biomimetics in the Biodesign Institute have just published their research in the journal Biochemistry and present a novel solution to this problem.

Specifically, they use a fluorescent amino acid that is not found in nature to generate a number of new fluorescent proteins whose light-emitting properties change when they interact with biotin, a compound that is very important in a number of metabolic processes.

“An important aspect of this study is that atomic-level pictures of many of these new proteins were generated that provide a great deal of information about how the binding of biotin changes the fluorescence properties of the proteins,” Mills said. “This information lays a foundation for the development of new fluorescent proteins that will help further the legacy that fluorescent proteins have already forged in the study of biological systems.”

“The protein studies of Jeremy Mills are typified by outstanding scholarship and a relentless commitment to making critical advances that will benefit science and society at large,” said Tijana Rajh, director of the School of Molecular Sciences.

This study involved a huge amount of work, including designing protein constructs and experiments, and purifying and crystalizing the proteins in order to collect the diffraction data. The data will be used in future studies aimed at the rational design of fluorescent, protein-based sensors of small molecule binding or dissociation.

This work was funded by a grant from the National Institutes of Health (NIH). The Research Project Grant (R01) is the original and historically oldest grant mechanism used by NIH. The focus of the grant is to develop novel fluorescent, protein-based tools that will be broadly applicable to the study of biological systems in ways that would be very difficult to achieve using existing fluorescent proteins.

Although nature has been building proteins for more than three billion years, the number of possible proteins is astronomical: There are more ways of assembling 100 amino acids than there are atoms in the universe. For years, scientists have tried to predict the shapes protein molecules should assume based on their amino acids — with limited success. The current study is a significant step toward understanding how to harness the power of proteins to help guide future efforts to rationally design new fluorescent sensors.

Mills is also passionate about bringing his enjoyment of science to the local community. He attributes a great deal of his love of research to participation in science fairs at the local and international levels while in high school. He serves as a judge at the Arizona Science and Engineering Fair and the International Science and Engineering Fair when possible. He also frequently demonstrates the use of the protein folding software Foldit to the public and has even developed lessons that are aimed at lay audiences that use Foldit as their foundation.

The team from the School of Molecular Sciences and the Biodesign Center for Molecular Design and Biomimetics also includes: Patrick Gleason, Bethany Kolbaba-Kartchner, Nathan Henderson, Erik Stahl and Chad Simmons.

By all appearances, the universe beyond Earth is a vast, lonely and sterile space. Yet, wherever humans may travel, an abundance of microbial life will follow.In the first study of its kind, lead author Jiseon Yang at the Arizona State University Biodesign Institute Center for Fundamental and Applied Microbiomics and her colleagues characterized different bacterial populations isolated over ti...

By all appearances, the universe beyond Earth is a vast, lonely and sterile space. Yet, wherever humans may travel, an abundance of microbial life will follow.

In the first study of its kind, lead author Jiseon Yang at the Arizona State University Biodesign Institute Center for Fundamental and Applied Microbiomics and her colleagues characterized different bacterial populations isolated over time from potable (drinking) water from the International Space Station (ISS). 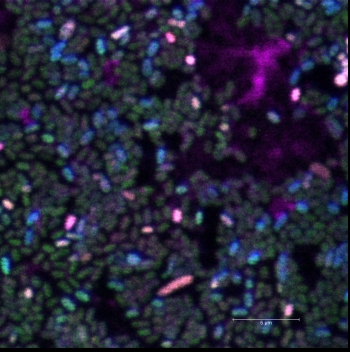 Biofilms are dense, multispecies aggregates of cells, which clump together in a residue that forms on surfaces. Biofilms are resistant to antimicrobials and notoriously difficult to clean up. They can cause a range of health issues and have a corrosive effect on many materials, including stainless steel, making them a threat to the water supply system of the International Space Station. Download Full Image

While historical monitoring of the ISS potable water system has focused on identifying microbial species that are present through both culture-dependent and independent (genome sequencing) methods, it is challenging for microbial identification approaches alone to faithfully predict the function of microbial communities. Understanding microbial function is critical to safeguard the integrity of mission-critical spacecraft life support systems and astronaut health.

The current study by Yang and her team investigated key functional properties of waterborne bacterial isolates from the ISS potable water system that were collected over the course of many years. The aim of this study was to expand our knowledge of how microbial characteristics that are important for astronaut health and space habitat integrity may change during long duration exposure to the microgravity environment of spaceflight. This is a critical issue to address, as microbial adaptations to microgravity have been shown to dramatically alter bacterial characteristics, including their ability to form dense bacterial aggregates known as biofilms in the ISS potable water system that could threaten mission success.

Investigations of the function and behavior of mixed microbial populations are gaining traction in the scientific community, as these types of studies provide insight into how microorganisms interact with each other and their environment in practical settings. Such research can help provide crucial guidelines for the assessment of microbial risk to water systems in space as well as on Earth.

“Polymicrobial interactions are complex and may not be stable over time,” Yang said. “Our study provides in-depth phenotypic analyses of single- and multi-species bacterial isolates recovered from the ISS water system over multiple years to understand long-term microbial interactions and adaptation to the microgravity environment. The results from our study may improve microbial risk assessments of human-built environments in both space and on Earth”.

The group’s findings appear in the current issue of the journal npj Biofilms and Microbiomes. 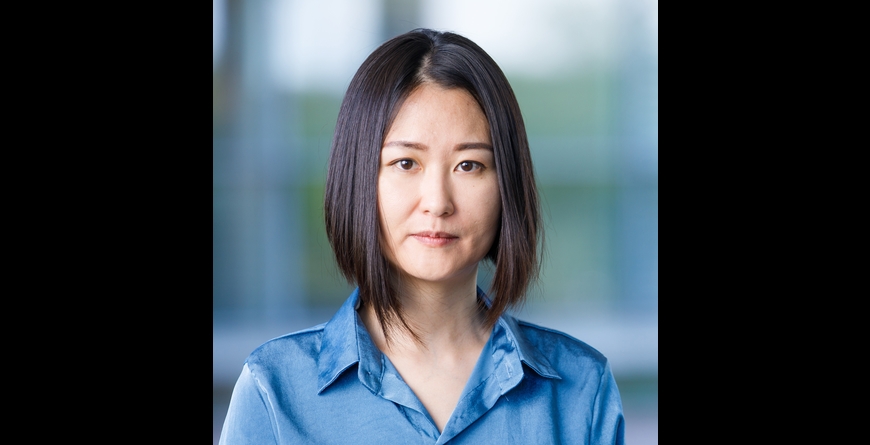 Jiseon Yang is a researcher in the Biodesign Center for Fundamental and Applied Microbiomics.

Water is a life-giving and indispensable substance, on Earth and in space. During spaceflight, a supply of clean water is essential for drinking and basic hygiene, but the challenges of reliably supplying it to astronauts are formidable, with every drop carefully managed.

According to NASA, without the ability to recycle water on the ISS, approximately 40,000 pounds of water per year would need to be transported from Earth to resupply just four crew members at an exorbitant cost for the full duration of their stay aboard the ISS.

The water purification system on the ISS, known as the Environmental Control and Life Support System, is used to cleanse wastewater in a three-step process. After initial filtration to remove particles and debris, the water passes through multi-filtration beds containing substances that remove organic and inorganic impurities. Finally, a catalytic oxidation reactor removes volatile organic compounds and kills microorganisms.

Although sophisticated life-support systems of this kind are designed to prevent contamination of this vital resource, bacterial communities have shown enormous resourcefulness in thwarting many preventive measures, with some forming biofilms throughout the ISS water recovery system.

In the current study, microbial activity was examined in the NASA-archived bacterial isolates collected from the ISS potable water system over multiple years. Bacterial species were profiled for antibiotic resistance, biofilm structure and composition, metabolism and hemolysis (ability to lyse red blood cells).

Despite the diminutive size of individual bacteria, which are unable to be seen by the naked eye, they are a force to be reckoned with. In addition to their individual abilities to cause a range of infectious diseases in humans, bacteria often clump together on surfaces to form dense multispecies aggregates known as biofilms, which are inherently resistant to being cleared by antimicrobials.

Bacterial biofilms have a major global socioeconomic impact and cause a myriad of health and industrial problems, resulting in annual economic losses in the billions of dollars on Earth. These problems include fouling oil and chemical process lines, encrusting invasive medical stents, causing infectious disease and contaminating water resources. In addition, biofilms can also cause aggressive corrosion to a broad range of materials, including the capacity to degrade stainless steel, which is the material used in the ISS water system.

For these reasons, control of bacteria in complex microbial ecosystems and management of biofilm formation are vital challenges, made particularly acute during spaceflight.

Despite these efforts, in-flight analysis of water samples from the ISS potable water system have shown microbial levels that exceed NASA specifications for potable water. The sources of this contamination are primarily due to environmental flora embedded in the water system itself.

While many of the same microbes found in drinking water on Earth are also found in the ISS samples, there is a concern that the space environment may act to heighten the potential threats these organisms pose in this unique environment. Of particular interest are the conditions of microgravity, which members of this same research group have previously shown can enhance the virulence and stress resistance of some infectious microbes, alter their gene expression profiles and encourage biofilm formation.

Compounding these issues is the fact that astronauts suffer aspects of immune suppression from spending time in the space environment, potentially leaving them more vulnerable to infection from microorganisms.

The results of the current study indicated that the ISS waterborne bacterial isolates exhibited resistance to multiple antimicrobial compounds, including antibiotics, as well as distinct patterns of biofilm formation and carbon utilization. In addition, one of the bacterial isolates, known as Burkholderia, displayed hemolytic activity, singling it out as a microbe of potential concern for astronaut health.

Observation of bacterial species interactions in this study also revealed distinct patterns of behavior, some of which were dependent on whether the samples were collected during the same year or over the course of different years, suggesting that adaptive processes were at work over time in the microgravity environment. Importantly, the dynamic phenotypes observed in this polymicrobial study would not have been fully predicted using sequencing technologies alone.

The findings from this study will help overcome the formidable challenges of ensuring safe drinking water for spaceflight missions, particularly those of longer duration. In addition, this study may provide information to improve the functionality of engineered water systems on Earth for industrial benefit and safety of the general public.

Jiseon Yang, Jennifer Barrila, Olivia King and Cheryl Nickerson are also researchers in the Biodesign Center for Fundamental and Applied Microbiomics. Nickerson is a professor at ASU’s School of Life Sciences.