In new research, ASU scientists identify the viruses that are circulating in Arizona arachnids

In the hot, arid environment of Phoenix and surrounding Sonoran Desert, ancient creatures flourish. Bark scorpions are among Earth’s oldest terrestrial animals. Their earliest fossil ancestors are believed to have made the transition from sea to land some 450 million years ago.

In new research, Arvind Varsani and colleagues in the Biodesign Center for Fundamental and Applied Microbiomics and Arizona State University’s School of Life Sciences, describe bark scorpions collected around the Phoenix area.

The venomous predators appear to play host to various polyomaviruses which, like the scorpions themselves, have ancient origins. The work was part of Kara Schmidlin’s MSc thesis with Varsani’s research group.

“A simple question emerged in the research group — what viruses are circulating in Arizona arachnids?,” Varsani says. “Soon, we were collecting scorpions in our backyards to address this question, and we identified these unique polyomaviruses.”

The findings appear in the current issue of the journal Virology.

There are nearly 2,200 species of scorpion, belonging to the class Arachnida. Nocturnal creatures, they are generalist predators, feeding on a wide variety of insects, spiders, centipedes and even other scorpions. They are found across an impressive range of ecosystems, including deserts, grasslands, savannahs, deciduous forests, pine forests, intertidal zones, rainforests and caves.

The animal’s simple body plan consists of two primary segments, a cephalothorax — which includes four pairs of legs and pincer-bearing pedipalps — and an abdomen, which carries the tail and stinger. The pedipalps are used to capture prey, for defense, in courtship and in burrow excavation.

In the current study, four bark scorpions were collected from the Phoenix area. Three of these were found to carry polyomaviruses in their gut or liver, though the viruses produced no obvious ill effects in the scorpions.

Polyomaviruses have circular, double-stranded DNA genomes. They were first isolated in the 1950s and given their name due to their ability to produce multiple tumors in their host organisms. Although polyomaviruses were initially identified in mammals (including humans), they have since been detected in birds and several fish species, though their diversity among arthropods has been a matter of speculation.

Careful techniques must be used to ensure an arthropod, like a scorpion, has truly been infected by a virus, as opposed to simply ingesting them from the environment or carrying them on their bodies within ectoparasites. The identification of the scorpion polyomaviruses hence remains tentative, though it is believed the viral host is either a scorpion or another arthropod.

The use of high-throughput sequencing along with traditional molecular techniques allowed the researchers to determine the genome sequences of eight novel polyomaviruses, belonging to three distinct putative virus species in the Phoenix scorpions. The study’s genomic analysis suggests that polyomaviruses and their scorpion hosts both underwent divergent evolution.

The findings are important as they suggest at least one ancestral species of polyomavirus existed among the ancient common ancestors of arthropods and Chordates — the phylum that includes humans and all other vertebrates.

In 2020, Arizona State University’s School of Politics and Global Studies partnered with the Department of Psychology to launch an online master’s degree program in political psychology. This summer, the program celebrated its first graduating class.

The MA in political psychology helps students to understand how voters think about politics and the response to political information, and how to effectively organize local, state and federal political campaigns. 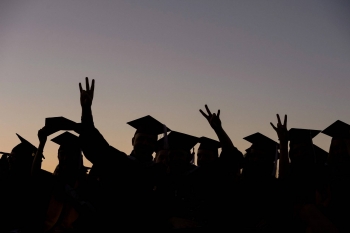 “The inaugural class was a mix of students from diverse goals and backgrounds,” said Kim Fridkin, Foundation Professor and director of the MA program. “Students participated in the program from across North America, including students from Canada, Oklahoma, Georgia, Idaho and Florida.

“These students began the program with different academic backgrounds, with some students having majored in psychology and political science, but others completing undergraduate degrees in linguistics, English and history.”

The eight students who made up the first cohort of graduates completed the degree in one year while taking classes in the fall, spring and summer.

Guila Cohen, one of the recent political psychology graduates, took courses while living in Montreal.

Having earned her undergraduate degree in psychology, Cohen said that this master’s degree program felt like a natural fit given that she often discussed political issues within her family.

“If you are interested in understanding the psychology that underlies political attitudes and behaviors, this program provides the insights needed to understand them at both the mass and elite levels,” Cohen said.

Cohen plans on applying to PhD programs this fall. In the meantime, she hopes to use some of what she has learned to gain hands-on experience at the local level.

“The program is accessible regardless of your past academic level, opening the field to those who want to make a career change or explore new horizons,” Cohen said.

One of the programs other recent graduates, Hannah Verrips, also completed her degree from Canada. This fall, she is starting her first semester within the political science PhD program at the University of Western Ontario.

“The quality of the students in the inaugural class was quite high; these students worked hard to complete the entire master’s program in less than a year,” Fridkin said.

“These students had different interests and goals, with some students intending to pursue a PhD in political psychology, other students acquiring new goals to be more effective in changing politics and policy, while others were interested in increasing their understanding of how people make decisions about politics for personal edification,” Fridkin said.

Even though the program is online, students have the option to work closely with faculty and utilize resources like the School of Politics and Global Studies Experimental Lab.

Justin Zyla, a current political psychology student, will be conducting a research experiment in the lab this fall. This experiment, and the MA program as a whole, has inspired Zyla to pursue a career in research.

“Spending time digging into the work inspired — in me, at least — a deeper appreciation for science,” Zyla said.

The emergence of COVID-19 offered time to reflect on career goals and personal ambitions, Zyla said. As someone who had considered returning to school for his master's for some time, the pandemic offered the chance to reimagine his life and envision himself as a professor.

“ASU helped me get reacquainted with school,” he said. “I've received amazing support and encouragement from faculty along the way.”

“If my dreams come true — corny, I know — it's because of this program, and it's because of the people who've been so generous and kind with their time. To me, the program's a launch pad to a future I didn't otherwise think was possible.”

Applications to the online MA in political psychology are currently open for the spring and fall.