ASU School of Arts, Media and Engineering Director Pavan Turaga has set a goal to empower all current and future students in the program with technofluency, a key pillar in the school’s mission statement.

“We want students to develop fluency of the tools of technology, how to apply them and ask, 'What are the implications?’” Turaga said. “All technology tools have certain trade-offs, and it’s become more and more clear, especially in the fields of media and social media, things driven by artificial intelligence, that those methods amplify certain biases that are prevalent in media already. We are creators who make art and media and engaging products, but let’s pay attention to the underlying assumptions that exist.” 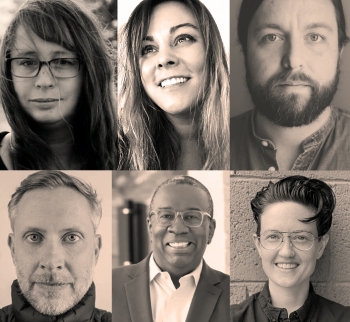 To help achieve the school’s new goal, it has welcomed several new faculty, all with diverse, branching disciplines and backgrounds. These new faculty members will not only help arts, media and engineering students grow, but also assist in the growth of Arizona State University’s new Mesa City Center project and programs.

"Among the School of Arts, Media and Engineering new faculty are several colleagues — Ana Herruzo, Laura Cechanowicz and Nicholas Pilarski — who will assist us for the ASU at Mesa City Center facility and its programs, which is an exciting beginning,” said Jake Pinholster, associate dean of the Herberger Institute for Design and the Arts. “We will be searching for a number of additional positions this year, and, by the time the building is complete in 2022, we will have put together a truly world-class team in extended reality (XR) technologies and related fields."

Prior to pursuing graduate studies, DB Bauer worked for many years in television, radio and film production with New Mexico PBS, Koahnic Broadcast Corporation and other freelance outlets. Bauer has broad experience in both producing and production, with a primary focus on audio engineering. In addition to media production, Bauer has a background in digital media preservation for university archival collections.

Bauer draws on this professional background in both previous and current research and teaching, focusing recently on the theoretical and social impact of new media theory and practice, speculative design, hands-on, critical making, and 3D media — particularly 3D media fabrication in both physical and virtual space.

“For whatever reason, I can’t help but be drawn to the beeping gadgets and neon lights that transport us to elsewheres and otherwises where things exist beyond, to quote Oscar Wilde, ‘the sordid perils of actual existence,’” Bauer said. “Not purely escapism — though certainly escapism surely has its benefits — digital tools allow us to bring those creative visions into everyday life and reimagine our shared futures.”

Joseph Watson, professor of practice, School of Arts, Media and Engineering and senior adviser to the dean, Herberger Institute for Design and the Arts

Joseph Watson, better known as Joe Watson, will work with arts, media and engineering in a number of ways, including mentoring students and sharing seminars, consulting with faculty on institutional and external strategy, and working with university leadership to elevate the work happening in the school. Watson has had a long career in strategy, business consulting, entrepreneurship and leadership development and has been featured in media outlets including The Today Show, CNN, PBS, The New York Times, The Wall Street Journal, Fast Company and The Chronicle of Philanthropy. Watson has authored books such as "Without Excuses: Unleash the Power of Diversity to Build Your Business" and "Where the Jobs Are Now."

He has been serving as senior adviser to the dean of the Herberger Institute and will continue in that role. He is also a member of The Fast Company Executive Board.

“I am thrilled to be working with (the school) at the intersection of creativity and engineering — understanding its unique role in educating the next generation of robust critical thinkers," Watson said.

With a jointly appointed contract with ASU's graphic information technology program and the School of Arts, Media and Engineering, Laura Cechanowicz will help the school with expanding research strengths in VR/AR/XR tech and its applications. Cechanowicz is an artist, designer and worldbuilder working in research, theory and practice across media, including extended reality and immersive technologies, VR/AR pre-visualization, animation, multimedia installation, narrative and experimental film, and production and sound design.

Cechanowicz works across industry and academia, consulting, writing and conducting workshops and talks on the practice of worldbuilding. Their talks and workshops have been hosted at Disney, LASER, VRLA, in conferences and within communities around the world in the United States, Japan, Argentina, Uruguay, Chile, India, Denmark and Brazil. Many of their worldbuilding projects have resulted in virtual reality immersive experiences presented at the Sundance Film Festival and in films, critically acclaimed interactive operas, multimedia collections displayed at the Venice Biennale, design frameworks for augmented reality apps and digital multimedia books. Cechanowicz’s production design talent was recognized at the 2015 Berlinale.

Luke Kautz is transitioning to faculty as a clinical assistant professor of digital fabrication and 3D modeling, having previously served as the digital design fabrication specialist running the school’s FabLab. Kautz said he believes this direct experience and knowledge as staff support to students and faculty will lead to deeper connections between all involved, helping to lift the academic and research possibilities within the school, at ASU and beyond. His current explorations look at the illusory notion of regenerative design; the cross-pollination of disciplinary techniques for new practices; and the use of design technologies to create mutual generosity between ourselves and our natural and built environments.

Kautz is also a senior researcher at the Center for Philosophical Technologies at ASU, having participated in several research and design projects.

Before coming to ASU, Kautz worked as a junior designer in the architecture office of Frank Gehry in Los Angeles, and prior to that he was a lecturer in the Knowlton School of Architecture at Ohio State University.

Nicholas Pilarski is an award-winning filmmaker with a background in immersive media, music, film, theater and community work. He creates interactive and emerging media stories that attempt to address issues related to historicized poverty and class-based trauma. His art is not “about” communities, but rather “of” them — helping build ecosystems where traditional lines between subject and author, teacher and student, and spectator and producer are intentionally contested and reimagined.

Pilarski co-founded and co-directs Peoples Culture, an arts collective in Chicago and New York working to reimagine shared narratives through collaborative art-making practices, whose work has been archived in the permanent collection of The Smithsonian: National Museum of African American History and Culture. His work has appeared in The New York Times, the Museum of Modern Art, Eye Institute Netherlands, U.S. Departments of Interior and Education and the Chicago International Film Festival. Pilarski holds degrees from the University of Michigan and Duke University, and his research interests include XR and computational media, film and media theory, class, geographic conflict, dialectics, utopianism, phenomenology and cognitive neuroscience.

Ana Herruzo holds a master's degree in design research in media-art from SCI-arc, a bachelor's degree and master's degree in architecture from ETSAM (Madrid, Spain) and is currently finishing her PhD at ETSAM, as part of the architectural communication doctoral program. Her background is in architecture, experience design and real-time interactive media. Her main focus is on incorporating lighting, audio and video with physical environments, materials and human interaction.

Herruzo has served as chair of the Applied Computer Science Department at Woodbury and won multiple industry awards for her wide-ranging work in installation, live events, film, robotics and architecture. She hopes to help the school grow its strengths in experience design as part of the Mesa programs.

As a hobby, she said she enjoys creating experimental audiovisual performances and plays in an electronic music duo called IvanaBytes. She is also the co-founder of an art collective called NaiveLaser and an interactive agency, VIRTULABS.

Arizona PBS will honor the legacy of Supreme Court Justice Sandra Day O’Connor with the national premiere of “Sandra Day O’Connor: The First” from 8 to 10 p.m. Monday, Sept. 13, on “American Experience” on Channel 8.1.An encore presentation is scheduled for 11 p.m. Sept. 13, with subsequent airings at 2 a.m. Tuesday, Sept. 14, and 2:30 p.m. Wednesday, Sept. 15. In addition, Arizona ...

A premiere event and panel discussion for members is scheduled for Sept. 8

Arizona PBS will honor the legacy of Supreme Court Justice Sandra Day O’Connor with the national premiere of “Sandra Day O’Connor: The First” from 8 to 10 p.m. Monday, Sept. 13, on “American Experience” on Channel 8.1. 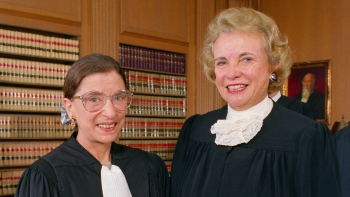 In addition, Arizona PBS will host a special virtual preview of the documentary for its members at 6:30 p.m. Wednesday, Sept. 8, followed by a panel discussion led by Mi-Ai Parrish, managing director of ASU Media Enterprise and a member of the Sandra Day O’Connor Institute for American Democracy’s board of directors. Panelists Nicole Maroulakos Goodwin, managing shareholder of the Phoenix office of Greenberg Traurig, and Leezie Kim, chief legal officer at Fox Restaurant Concepts, will discuss O’Connor’s legacy on the court and her influence in Arizona.

O’Connor was the first woman to be appointed to the U.S. Supreme Court after she was nominated by President Ronald Reagan in 1981. She spent 25 years on the court, emerging as one of the more moderate justices of the time.

O’Connor was born in El Paso, Texas, and was raised on a cattle ranch near Duncan, Arizona. She graduated at the top of her class from Stanford Law School but focused on volunteer work and public service after law firms refused to interview her because she was a woman.

This led to her rise through the ranks of the Arizona Republican party from precinct captain to Arizona’s assistant attorney general to the first female state Senate majority leader in the nation. O’Connor was a state Court of Appeals judge when she was appointed to the U.S. Supreme Court by Reagan, who had made a campaign promise to name a woman to the highest bench. At the time of her appointment, she had never heard a federal case, but was well-regarded and well-connected within the Republican party.

Her hearings before the Senate Judiciary Committee were the first of any Supreme Court nominee to be broadcast live on television, and tens of millions tuned in. O’Connor’s interrogators attempted, time and again over three days, to probe her about her views on the most controversial issues of the time. Her Senate confirmation was unanimous at 99 votes to 0, and she was officially sworn in on Sept. 25, 1981.

During her tenure, O’Connor was frequently viewed as a swing vote due to her moderate stance on various issues, as well as a judge who could negotiate with colleagues on both sides of the aisle. She served as the critical deciding vote on some of the most controversial issues of the 20th century, including those involving race, gender and reproductive rights. O’Connor was the deciding vote in Bush v. Gore in 2000, which gave the presidential election to George W. Bush.

O’Connor retired from the U.S. Supreme Court in 2006. This PBS biography, released on the 40th anniversary of her appointment to the highest court, recounts the life of a pioneering woman who both reflected and shaped an era.

To confirm your Arizona PBS membership and register for the virtual event, please contact Paulina Sanchez at paulina.sanchez@asu.edu.