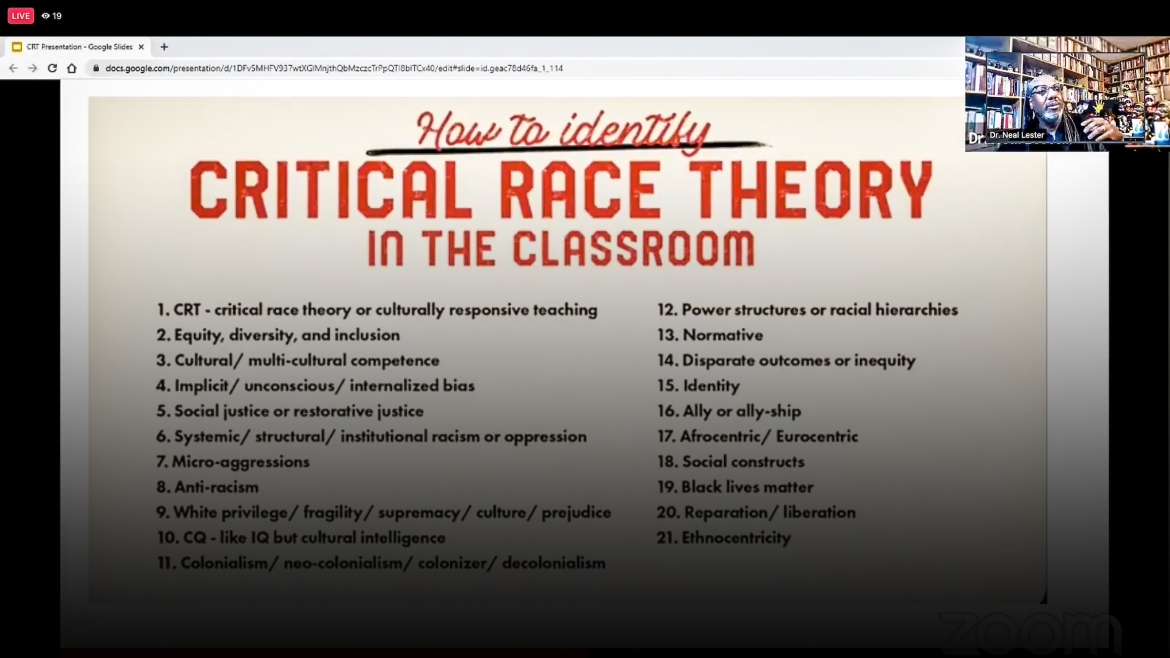 Despite flurry of bills banning it, the academic concept is not taught to kids

In the crowded landscape of divisive topics and misinformation in the U.S. right now, one of the most contentious issues is critical race theory — the target of a flurry of legislation in many states.

“We know that people know it’s a hot-button topic, but so many people are confused by it,” Neal Lester, founding director of Project Humanities, said to kick off the event, which drew more than 600 viewers. Lester is also a Foundation Professor of English at ASU.

The panel discussion featured three high school classroom teachers, all of whom were named the 2019 Teacher of the Year in their states.

The goal was to dispel myths about critical race theory by clarifying what it is. One fact: It’s not new.

“This became a thing in the 1970s, which is interesting because no one was challenging it then,” Lester said. “So why are we having this big political kerfuffle now?”

Lester pinpointed the timing of the recent controversy to the aftershocks of two events: the release of “The 1619 Project,” a 2019 journalism initiative that highlights the legacy of slavery in U.S. history, and the 2020 murder of George Floyd by a white police officer.

“With George Floyd’s murder and this alleged racial reckoning, folks felt the need to do something,” Lester said.

“That’s what came to be known as anti-racism work. And folks started saying things like 'systemic racism' and 'privilege' and 'bias.' And that’s how these things got conflated. That wasn’t critical race theory.”

Kareem Neal, a special education teacher in the Phoenix Union High School District, said: “People are taking the books 'White Fragility' and 'How to Be an Anti-Racist' and saying, ‘This is critical race theory. Keep it out of our schools.’

“It’s conflating lots of things together by folks who are frustrated overall with anti-racism and social justice.”

So what is it?

Lester said that Columbia University law Professor Kimberlé Crenshaw was one of the first scholars to write about the concept, and he quoted her in describing critical race theory as a way of scrutinizing the role of U.S. law in perpetuating racism.

“The ‘critical’ in critical race theory is the idea of questioning,” he said.

“We want our students to ask questions of a text and not just accept it because somebody told them it was true.”

Stacey McAdoo, who teaches at Central High School in Little Rock, Arkansas, said: “For me, it’s simply something that was started in the 1970s that is about systemic racism — not about individual people who have prejudices.”

“I like to clarify to people that it’s about the study of (racism) and the theory of it, and it is not a commonly taught topic in regular K–12 schools.” 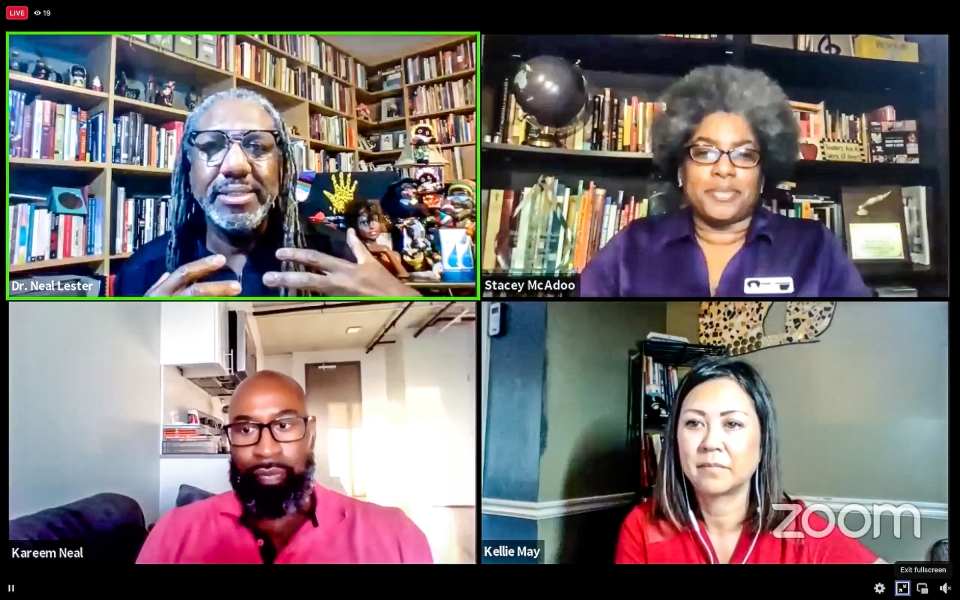 The event included a short video of a Black man speaking out against critical race theory at a public meeting, saying that he has two degrees, which proves that Black people are not oppressed by racism.

Neal pointed out the flawed logic that there can’t be racism because of one man’s personal success.

“Most of the folks talking about this, we’re good. We’re not saying, ‘We’re beat up by this American system.’ We’re saying, ‘People are constantly being beat up by this system so we should analyze it,’” he said.

So why all the controversy? The speakers discussed the concept of American exceptionalism as the reason many people are misguidedly attacking critical race theory.

“The way America views itself is as exceptional, a great country and no one else is as good as us,” McAdoo said. “Those who oppose critical race theory are upset about the presentation of America as not looking as though it is a great country.

“It’s a dual narrative of whether or not America was founded on the backs of enslaved people or whether it’s a great country that upholds American values.

“It can be both. Those two things can be true.”

Lester said that some people feel that critical race theory — which reveals the damage of systemic racism — threatens their personal identity, which is based in the greatness of America.

Lester asked: “What can people do when 26 states, as of July 21, have proposed legislation or executive action banning or limiting principles associated with critical race theory?”

Neal said that teachers should consider joining committees that choose curriculum, which is approved by the district governing board.

“It’s a layer of protection. I’m teaching the Phoenix Union curriculum. It’s not Kareem Neal going wild in his classroom,” he said.

May said that in Utah, although opponents have been vocal, she’s seeing more parents who favor teaching concepts of racism organize and speak out.

“I’m a hopeful person, and I think this will work itself out,” she said.

McAdoo said that parents and community members can publicly support teachers who want to teach the truth.

“They can trust teachers to be the professionals that they are,” she said.

“Teaching the truth benefits us all. You can write letters and go to the Capitol to testify.”

Top image: Professor Neal Lester illustrates some of the keywords used in classrooms as identified by opponents of critical race theory, as he leads a Project Humanities virtual panel discussion on “Dispelling the Myths: Critical Race Theory in K–12 Classrooms,” on Tuesday, Aug. 24. Screenshot by Charlie Leight/ASU News

Ryggs Johnston and David Puig are poised for a big season. The Haskins Award agrees. ... Ryggs Johnston and David Puig are poised for a big season. The Haskins Award agrees.