When Mary Cook moved across the country from Nashua, New Hampshire, to attend Arizona State University, she planned to major in music. After an in-person visit to meet Professor Martin Schuring, she was so impressed with his playing and teaching that she decided to study oboe with him.

After her first year as a music major, she started to doubt whether she would enjoy life as a career musician. She added a mathematics minor as a way to try something else. Eventually she found out that taking only a few extra classes would allow her minor to turn into a second major. In 2016, she graduated with dual degrees, a bachelor of science in mathematics and a bachelor of music in orchestral performance (oboe). 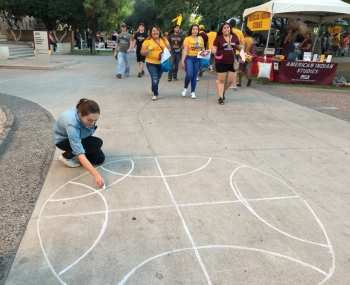 As an undergraduate, Cook had not even considered applying to graduate school, and certainly not for math. That changed during her MAT 410 topology class with President’s Professor Matthias Kawski.

“Already in the first few weeks Mary was doing extremely well. I knew she was a music-math double major. I wrongly had thought that she would continue with music, the math was just for fun,” Kawski said.

He told her about graduate programs for mathematics, and encouraged her to apply.

Cook decided to stay at ASU and pursue a doctorate in mathematics in the School of Mathematical and Statistical Sciences. She worked with Associate Professor Brett Kotschwar.

During her studies, Cook took a wide variety of classes and found that her favorites were related to geometry and analysis. She also attended the differential geometry seminar fairly often, and that lead to her interest in geometry.

Cook’s research is in geometric analysis, specifically the Ricci flow. The idea is to take a geometric object (imagine something like a lumpy cylinder or sphere) and deform it under very particular rules, and then study the way that it changes.

“Mary is a talented young mathematician and a very creative and independent thinker,” Kotschwar said. “She really impressed me with how quickly she was able to digest new and often very technical material and frame it in her own way.”

Kawski also shared his praise of her work.

“I really liked the way Mary creates and writes arguments in a very personal style, very different from the widely available ‘standard’ proofs. She truly wants to figure out, by herself, what works and why,” Kawski said.

“Mary was one of the true stars of our research group in differential geometry and topology. She gives wonderful presentations always tailored to the audience.

“Mary also substantially contributed to the improvement of community and social life in our school, in particular through her leadership in the AWM program, and participation in many social events sponsored by AWM.”

Cook was part of a small group of young women who re-ignited the Association for Women in Mathematics student chapter at ASU, serving as vice president. Members of the student chapter learned about the complex problem of underrepresentation of women in mathematics and the many contributing factors. The club hosted a speaker series featuring nationally known mathematician and author Eugenia Chang, and president of the national association, Ami Radunskaya, among others.

During graduate school, Cook stopped playing oboe and taught herself the violin, which she played as a member of the ASU Philharmonia orchestra.

Cook was also selected as a student leader of The College of Liberal Arts and Sciences. She volunteered at many events including the ASU Homecoming Block Party and Open Door, where she led engaging, thoughtful and fun math activities for the general public.

Cook graduated this summer with a doctorate in mathematics. Like many others in the era of COVID-19, she defended her thesis "Some Questions on Uniqueness and the Preservation of Structure for the Ricci Flow" virtually via Zoom.

She will be starting as a visiting assistant professor at the University of Rochester this week. She is excited to move closer to her family in Rhode Island.

“We will be able to take a train or drive to see them, much nicer than the long flight from Phoenix,” Cook said.

She plans to try to stay in academia after her postdoc. 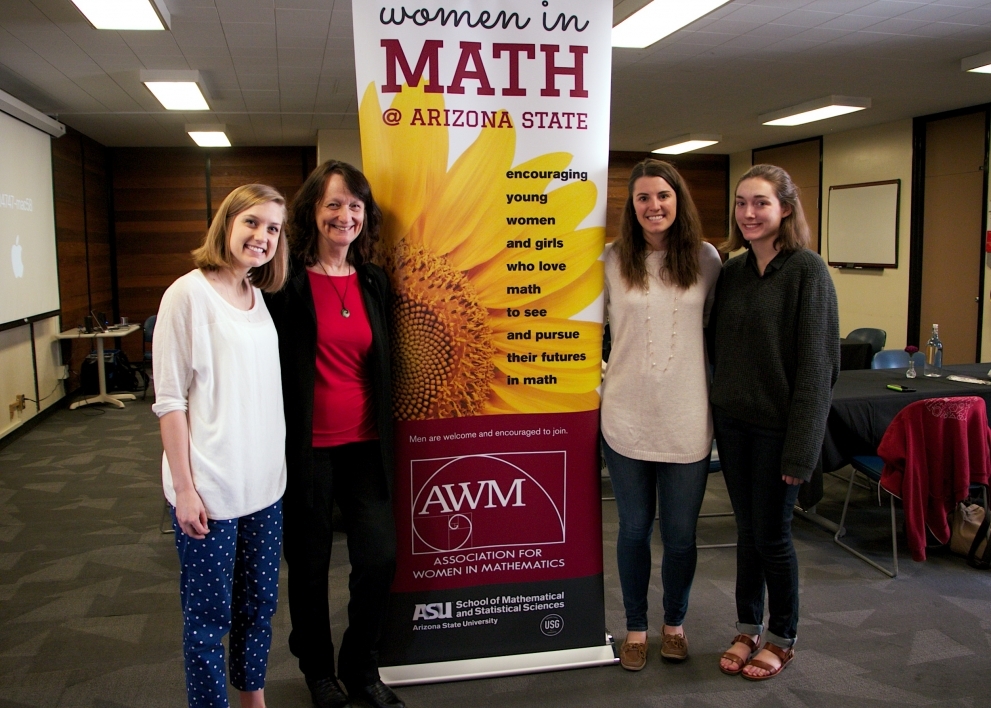 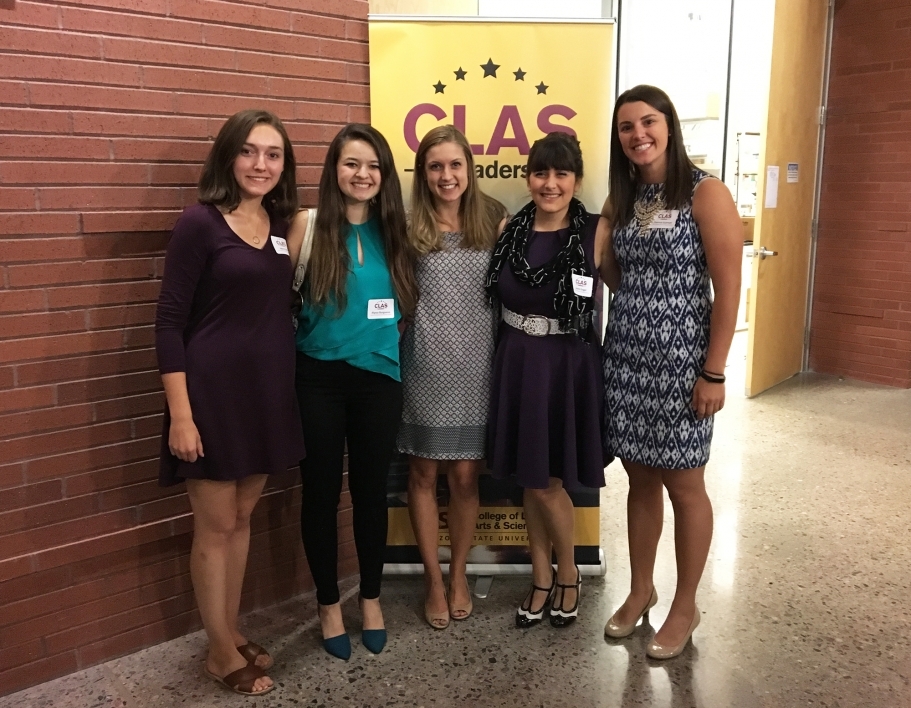 Students in the School of Mathematical and Statistical Sciences were honored as The College of Liberal Arts and Sciences Student Leaders, including Mary Cook (far left). 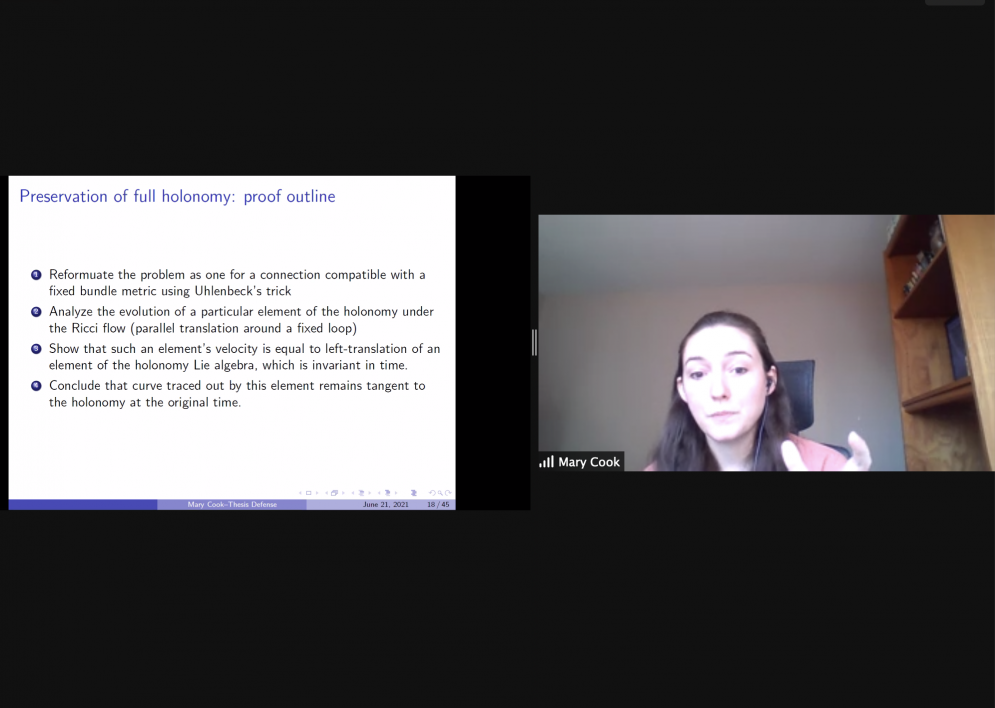 Mary Cook defended her mathematics PhD thesis virtually via Zoom, like many during the COVID-19 era. Cook is congratulated virtually by colleagues, faculty and friends after successfully defending her mathematics PhD thesis. 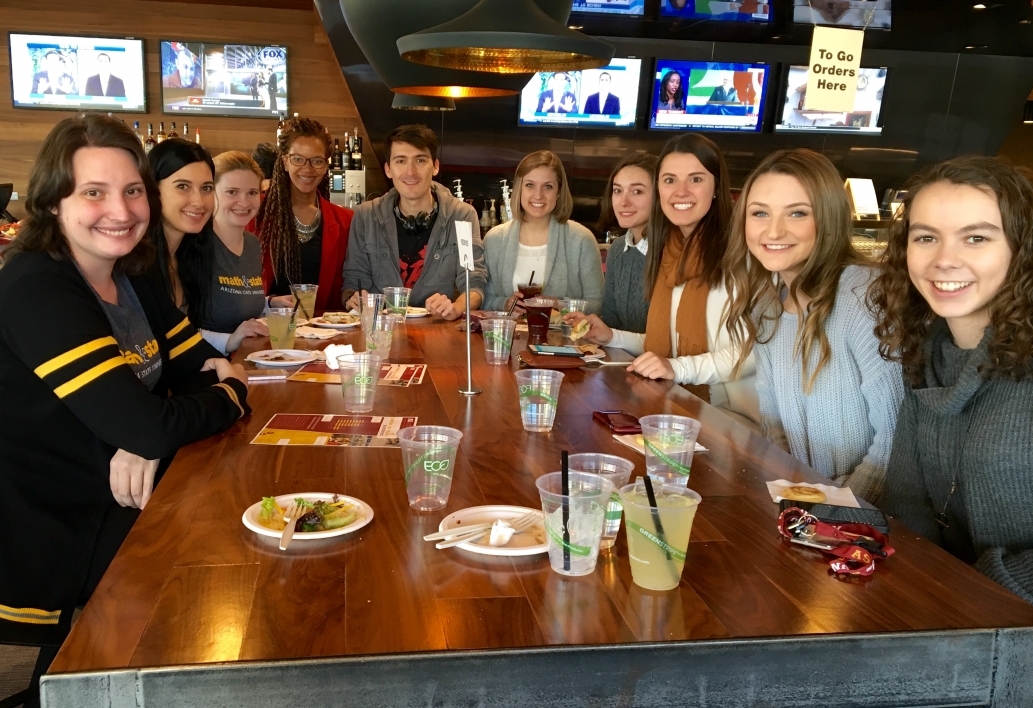 The ASU student chapter of the Association of Women in Mathematics hosted many social events, which substantially contributed to the improvement of community and social life in the school. Mary Cook and other club members attended the AWM Welcome Back Happy Hour held at Pitchforks and Corks on College Avenue.

“I guess my ‘dream job’ would be to continue working at a university in some way,” Cook said. “But, if that doesn't work out, I would really like to continue teaching, maybe at the high school level.”

"She has graded for me for many courses. I love the different-colored inks she uses for her comments in a beautiful handwriting, very polite, but always to the point," Kawski said. "She has served as a great role model and mentor for many of my students."

“Mary is a natural in the classroom and an unfailingly positive person to be around,” Kotschwar said. “Our program was very lucky to have a student of her caliber. My job as an adviser was really a very easy one.”

Before Cook headed back East, we asked her to share a bit more about her journey as a Sun Devil.

Answer: I like how when working on a problem, it becomes more like a game than work. You know the result you want, but there are so many possibilities to get there.

Q: What is something you learned while at ASU that surprised you or changed your perspective?

A: Though I think on some level everyone knows this, I was surprised to see firsthand that everyone, even the most brilliant mathematician, makes mistakes. When I was younger, I thought that at some point I would reach a level where I no longer made any errors, but that point never came. It's really freeing to realize that this is true for everyone.

A: It's hard to pick a lesson which is the most important, but my adviser (Brett Kotschwar) has taught me so much over these years. One thing that stands out is that he taught me not to downplay my own work, which is something I've struggled with a lot.

A: Don't be afraid to ask questions or ask for help. Many students seem to be nervous to ask a question in front of an entire class, but chances are, others will be wondering the same thing and be glad you spoke up.

A: My favorite spot is my office. It's a peaceful place to work, and there are always other students around to talk to when I need a break.

A: My favorite hobby is playing music. I'm looking forward to playing in community orchestras again now that some of them are starting back up!

A: I think most people don't realize how much creativity goes into doing math. I think most people imagine that mathematicians sit around all day adding really big numbers together or something like that, but in reality writing proofs requires a lot of creative thinking.

When people think of coral reefs, images of beautiful colors and structures come to mind. But beyond aesthetic pleasure, coral reefs provide numerous benefits, ranging from food security and coastline protection to their role in coastal traditions and cultures. Although reefs cover less than 1% of the ocean floor, they support about 25% of marine life and earn their nickname: the rainforests of th...

When people think of coral reefs, images of beautiful colors and structures come to mind. But beyond aesthetic pleasure, coral reefs provide numerous benefits, ranging from food security and coastline protection to their role in coastal traditions and cultures. Although reefs cover less than 1% of the ocean floor, they support about 25% of marine life and earn their nickname: the rainforests of the sea.

A major challenge to reefs today is whether corals can persist under changing climate. One way that climate affects corals is by stimulating the overgrowth of algae that can smother the reef, making life tough for new corals to survive. 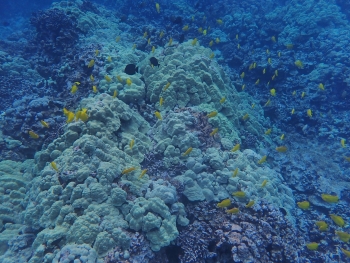 To better understand the balance between coral and algae, scientists at Arizona State University’s Center for Global Discovery and Conservation Science explored the role of herbivorous fish in keeping check on one of the main antagonists in coral-algae fight for reef space, known as “turf algae.” Their findings were published on Aug. 9 in Coral Reefs, the Journal of the International Coral Reef Society.

Led by postdoctoral researcher Shawna Foo, the team utilized 1,476 fish and benthic surveys from 2010 to 2019 across the eight main Hawaiian Islands.

A mixture of many algal species and usually less than 2 cm (less than 1 inch) in height, turf algae grows quickly and occupies new spaces on the reef. It can also overgrow and kill coral. Herbivores protect coral by grazing on the turf algae, reducing their overall cover, like cattle on a grass pasture.

Prior to this study, the role of herbivorous fish in controlling algae was well known, but there was limited understanding of how this role changed by reef depth and with different types of fish. The new study revealed patterns between different types of herbivore fish — scrapers like parrotfish, browsers like angelfish and grazers like tangs — and their relationship with how much turf algae covered the ocean floor on shallow, mid and deep reefs.

“Overgrown algae is a critical issue for coral reefs globally,” said Greg Asner, study co-author and director of of the center. “This research sheds new light that directly supports the need for conserving herbivore reef fish in a warming climate, for reefs that otherwise will continue to lose to turf algae.”

The fish surveys were conducted by National Oceanic and Atmospheric Administration divers who counted, sized and classified fish at each site. They also estimated what covered the ocean floor, allowing the researchers to distinguish between coral and different types of algal cover. With these surveys, the ASU team investigated factors related to fish and turf algae, including how the composition of herbivorous fish changed at different depths and how fishing intensity changed across depths.

“Our findings also indicate that fishing on deeper parts of Hawaiian reefs may be the most detrimental because deeper reefs are naturally inhabited by fewer fish compared to shallower reefs,” Foo said. “So deeper reefs would be more vulnerable to fishing pressure on herbivores”.

The findings provide new input to reef managers in Hawaii and beyond. Herbivore fish management is a key strategy that can reduce turf algae and boost coral survival. While past management has often focused on the total biomass of herbivore fish present on a reef, the new research indicates that the number of fish — literally the number of mouths on the reef — is the more important goal in the effort to battle turf algae and to protect corals in a warming climate.