The news headlines following the publication of the United Nations’ latest Intergovernmental Panel on Climate Change report painted a grim picture for the future. Media outlets, scientists and politicians are calling it a “code red for humanity.” The necessity for action is clear and urgent, and one of ASU’s leading water and sustainability experts has been tapped to help respond to our most pressing national and global challenges.

Dave White, deputy director of Arizona State University’s Global Institute of Sustainability and Innovation and professor in the School of Community Resources and Development, has been selected to represent the Southwest region as chapter lead author for the Fifth U.S. National Climate Assessment. White previously served as co-author for the complex systems chapter for the Fourth U.S. National Climate Assessment, published in 2018. 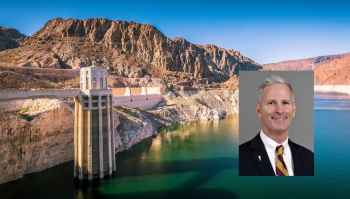 “I am honored to step into the lead author role for NCA5 for the Southwest, and I look forward to building an author team that represents the true diversity of our region,” White said. “Our primary goal is to develop actionable knowledge to address the climate crisis.”

The National Climate Assessment evaluates findings of the program and analyzes the effects and trends of global climate change. Based within the U.S. Global Change Research Program (USGCRP), the National Climate Assessment program comprises publicly nominated and hand-selected experts from 10 different regions of the country. USGCRP is steered by the Subcommittee on Global Change Research of the National Science and Technology Council’s Committee on Environment, which is overseen by the White House Office of Science and Technology Policy. The USGCRP is responsible for developing and coordinating “a comprehensive and integrated United States research program which will assist the nation and the world to understand, assess, predict and respond to human-induced and natural processes of global change.”

“Given the state of the climate crisis, there is an urgent need to anticipate challenges and develop viable options for informed action,” said Peter Schlosser, vice president and vice provost of ASU’s Julie Ann Wrigley Global Futures Laboratory, home to the Global Institute of Sustainability and Innovation. “In Arizona, climate change is already affecting our communities and causing impacts to our water resources, forest ecosystems, agriculture, energy and human health. The NCA5 will provide valuable information in a transparent, well-documented and accessible format that empowers Arizona communities to make better decisions to ensure a future in which everyone can thrive.”

Eduardo Pagán, the newly appointed associate dean of Barrett, The Honors College at Arizona State University’s West campus, said he wants students to know this about him:“I believe in the transformative power of education and I believe there’s room in academia and at this university for all kinds of learners.“Your success matters to me. Where you came from matters to me.”This philosophy...

Eduardo Pagán, the newly appointed associate dean of Barrett, The Honors College at Arizona State University’s West campus, said he wants students to know this about him:

“I believe in the transformative power of education and I believe there’s room in academia and at this university for all kinds of learners. This philosophy has been the foundation of Pagán’s work for over a decade in several positions at ASU, including vice provost for academic excellence and inclusion, associate dean for community engagement at the New College of Interdisciplinary Arts and Sciences, president of the West campus faculty senate and faculty council chair for the Arizona Board of Regents.

Pagán currently is the Bob Stump Endowed Professor of History at the West campus in the School of Humanities, Arts and Cultural Studies. Now he is stepping into a new role heading up Barrett, The Honors College at ASU West. He replaces Professor Ramsey Eric Ramsey, associate dean at Barrett West since 2010, who will focus on writing a scholarly book.

He served as an assistant dean of students at Princeton, a faculty member at Williams College and a senior program officer at the National Endowment for the Humanities in Washington, D.C. He has held an NEH Fellowship and was a postdoctoral fellow at Wesleyan University and at the University of California, San Diego.

Pagán may look familiar to history buffs; he was a host on the television program "History Detectives" and a historical consultant with "American Experience," both on PBS, and has appeared in national and international documentaries and television shows.

He has served as a panelist for the Department of Education, the National Endowment for the Humanities and the Arizona Humanities Council, as a committee member for the Organization of American Historians, and as a judge for the National Academy of Television Arts and Sciences.

Pagán said his passion lies in mentoring and teaching.

“One of my great joys is sharing what I’ve learned and helping students grow. I hope to continue to do that for students in Barrett Honors College,” he said.

Mark Jacobs, vice provost and dean of Barrett, The Honors College, said Pagán is uniquely qualified for his new position.

“Professor Pagán, an ASU alum, is a faculty member from West, for West and of West and thus a great person to head up Barrett’s efforts on the ASU West campus. He has a great deal of administrative experience already at both the West campus and serving all of ASU in various capacities and is serving as the president of the ASU faculty senate now,” Jacobs said.

“He is particularly interested in helping with the recruitment and retention of first-generation students and those from underserved populations to aid as he was aided with good guidance and supportive mentoring.”