Arizona State University Assistant Professor Henry Thomson has been chosen as a member of the first cohort of visiting fellows for the Program on Pluralism and Civil Exchange at George Mason University’s Mercatus Center.

The Program on Pluralism and Civil Exchange is a new initiative “focused on building pathways toward a free and peaceful society.” It has initially announced four visiting fellows “who will each be focusing on a specific aspect of encouraging a liberal society.” 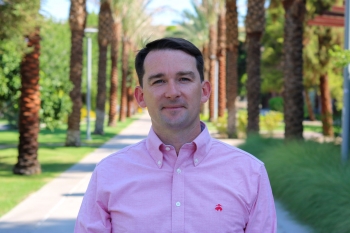 Thomson, whose research focuses on the relationship between capitalism and democracy, will be investigating the challenge to liberalism posed by economic nationalism.

“I am grateful for the Mercatus Center’s support as I look into the reasons for rising opposition to international trade and migration in the U.S. and abroad,” he said.

Thomson is currently working on a project with ASU Foundation Professor Michael Hechter that will look at the “new economic nationalism” in the developed world and how the COVID-19 pandemic will affect politics and economics in places like the United States and Britain.

Economic nationalists, say Thomson and Hechter, are focused on culture-based rather than class-based mobilization and want to restrict immigration and international trade.

“From Donald Trump’s trade wars through Brexit to responses to the COVID-19 pandemic, the liberal economic order that governed the global economy since the Second World War has been significantly disrupted," said Thomson. "It is important to understand why voters and politicians have turned against globalization.”

These political shifts sometimes happen quite dramatically. To take a local example, the Arizona mining towns Miami and Globe historically were strongholds of organized labor and the Democratic party. In the 2016 election, however, they swung heavily Republican. These small cities, according to their work, illustrate the way that strong class identities have given way to cultural ones and produced economic nationalism.

The project also plans to go more in-depth on the rise of new economic nationalism in the United States during the Donald Trump presidency and how it might look in the future despite his failure to win reelection in 2020.

“If we are interested in the future of liberalism in the United States, we need to know whether the illiberal turn in economic policy under Trump was a flash in the pan or a permanent scrambling of left-right divisions replaced by nationalism.”

University News School of Politics and Global Studies The College of Liberal Arts and Sciences The Melikian Center: Russian, Eurasian and East European Studies Center for the Study of Economic Liberty Politics Faculty

US News ranks ASU among best in nation for online programs