Deanna Swoboda, associate professor in the School of Music, Dance and Theatre in Arizona State University’s Herberger Institute for Design and the Arts, is the first woman to be awarded the International Tuba Euphonium Association’s (ITEA) Excellence in Teaching Award.

One of the most prestigious in the tuba world, the award is given in recognition of demonstrated excellence in the teaching of tuba and euphonium, advancement of the pedagogy of those instruments and dedication to the mentoring of young musicians. 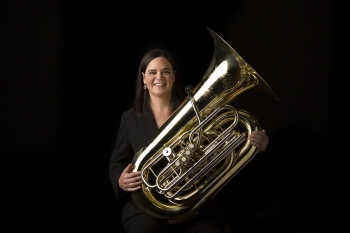 Deanna Swoboda has enjoyed a vibrant career as a performer, educator and entrepreneur and has been teaching full time at the university level for 17 years and as adjunct faculty prior. She has performed hundreds of solo recitals and presentations throughout the United States and Europe. Download Full Image

“I have always taught and performed professionally equally, and I am equally passionate about both,” said Swoboda. “I appreciate the opportunity to help students find their chosen career path and how to create success and happiness for themselves.”

Swoboda was nominated by a former student who collected numerous letters of support outlining Swoboda’s teaching and contributions to the academic world written by her current students, former students and colleagues. The winner is determined by the ITEA board of directors after reviewing all the international nominations and letters submitted.

“The fact that someone takes the time to nominate you, and then contact your students and your colleagues on your behalf, and then ask them to support you is quite an honor,” said Swoboda.

The awardee must have a minimum of 10 years of full-time teaching experience in a tuba/euphonium position and be nominated by a colleague or a current or former student. There have been six awardees in the past 12 years, with one award given every two years.

Swoboda has enjoyed a vibrant career as a performer, educator and entrepreneur and has been teaching full time at the university level for 17 years and as adjunct faculty at universities or colleges prior. While teaching, she maintained a solo career and also toured with the Dallas Brass, with whom she still performs as a substitute tuba player. She has performed hundreds of solo recitals and presentations throughout the United States and Europe, including the United States Army String Orchestra, the Deutsches Tubaforum, the National Conservatory of Madrid and the St. Petersburg Conservatory. She has also performed concerts and presentations around the U.S. that support and enhance public school music programs. She is a past president for the International Tuba Euphonium Association and is an Eastman Music Company tuba artist.

Swoboda said her multifaceted career is one reason she likes to teach in the school’s entrepreneurship program and help students think about careers and how they, as artists, can piece together many different options — with the artist at the center and career options to perform, to teach, to conduct research and more.

The first instrument Swoboda learned to play was the clarinet in fourth grade. In eighth grade, she switched to tuba – all because she had a crush on a boy and wanted to sit next to him. As it turned out, Swoboda fell in love with playing the tuba. She was motivated to practice, play more and be more involved in music at school, including orchestra and community music playing with New Orleans-style groups. She also sang in the choir and played in the jazz band and in the marching band through junior high and high school, eventually choosing music as her career path.

“As a teacher, it is my responsibility to help students recognize opportunities for performing and for teaching — what a career can look like in music as a young tuba player or euphonium player,” said Swoboda. “Part of the reason that I teach for the music entrepreneurship program at ASU is to help all of our students realize and recognize the importance of having business skills and marketing skills as creative artists. No matter what your chosen art form, you also need to have other skills of communication, marketing and business finance. You need to know branding — how to put yourself out there as an artist and be successful.”

Swoboda said that it is important not only to be prepared for the opportunity that may be presented, but also to create opportunities and learn how to look at what you currently have and what's out there to find a gap where you can fit in and create something new in the music business or the art world.

“No matter your instrument in your chosen career path, with determination, education and creating your own opportunities, anything is possible, especially at ASU,” said Swoboda. “There are so many opportunities for expanding your knowledge and putting yourself out there in the world — enjoying what you do and being successful at what you do.”

Low levels on the Colorado River: What it means for you

The Colorado River is running low.Battered by 20 years of drought, flows have been consistently dropping in the river that 40 million people depend upon. The water level in Lake Mead is the lowest it has been since Hoover Dam was built, at 36% capacity.On Aug. 15, the U.S. Bureau of Reclamation will declare a shortage. That will result in a cut in deliveries to Arizona farmers. Most people won’t... 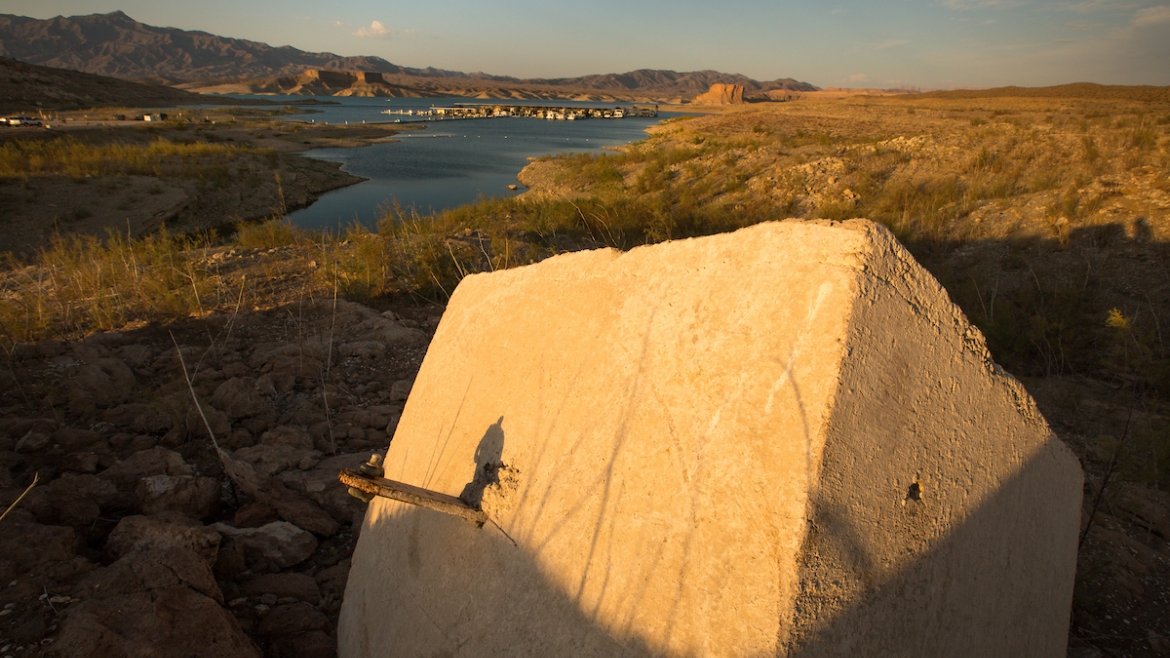 Low levels on the Colorado River: What it means for you

Years of drought have led to the lowest water level in Lake Mead since the 1930s — what comes next?

The Colorado River is running low.

Battered by 20 years of drought, flows have been consistently dropping in the river that 40 million people depend upon. The water level in Lake Mead is the lowest it has been since Hoover Dam was built, at 36% capacity.

On Aug. 15, the U.S. Bureau of Reclamation will declare a shortage. That will result in a cut in deliveries to Arizona farmers. Most people won’t notice any changes, either in their bills or the new subdivision being built down the block.

But other cuts are looming, and life in the Southwest will become more complicated. Experts say a few wet winters won’t change anything; the river is overallocated between states, and it’s not coming back.

Should we conserve? Or not worry about it? Will we have water cops and drought-shaming, like Nevada and California?

“We have developed very adaptive, complicated systems so that we can have a high degree of water certainty, which we need to have because we're in one of the most arid places in the U.S.,” said Sarah Porter, director of the Kyl Center for Water Policy at Arizona State University’s Morrison Institute for Public Policy, a policy research think tank.

There won’t be any immediate effects on urban growth. No city has looked to the Colorado River to support growth for some time — that water was allocated a long time ago. Developers are required to show proof of a 100-year supply for any residential project.

The Central Arizona Groundwater Replenishment District has a 30-year deal with the Gila River Indian Comminuty to lease a water supply. It’s intended to bridge a transition to another water source.

Lots of cities have more than enough water for all their projected growth, especially the older cities that were here when the Salt River Project was established 118 years ago. Some cities have found other supplies of water, either through long-term leases with Native American tribes or through other kinds of supplies that have become available. It doesn't mean these cities don't face challenges, but they're not worried about where to find water supplies.

Newer cities like Buckeye and Queen Creek, however, are actively looking for water supplies.

The challenge for those areas that are growing on groundwater supplies with a promise to replenish in the future is what they are going to do when the groundwater supplies aren't available. Where are they going to get their water supply? How much growth should Arizona or the CAP area accommodate when we know that — at some point — there won't be any groundwater for all that growth?

“One of the things that's very evident if you look at the Arizona intrastate agreement around the Colorado River shortage, it's clear that there has been a big effort to try to protect the highest-priority users, which are cities and tribes, from shortage,” Porter said. “So the supplies for tribes and cities aren't impacted until we get to Tier 3.”

Tier 3 is when Lake Mead drops to 1,025 feet. It will hit Central Arizona Project municipal and industrial water users. A Tier 2 declaration is expected in 2023.

Porter doesn’t see a near future involving things like water cops. One reason for that is who got water a hundred years ago.

There isn’t one bucket of water that all the cities share; there is a priority system. But why should Phoenix and Mesa and Tucson have high priority when Buckeye wants to grow?

When a city knows how much water it has, it can plan and ensure a high degree of water resilience when it has secure long-term supplies. It enables everyone from lowest to highest to understand what their likely future is. And it’s why some cities can build water-use-intensive data centers and microchip fabs and others can’t.

“It means that you have winners and losers, and that's what we sort of have here,” Porter said. “We have places that want to grow, and they're really facing the challenge of how to get the water for growth. Now, did cities who have a lot of water now face that same challenge a long time ago? Yes, they did. They did before the CAP was built and they did before the Roosevelt Dam was built. It's been an ongoing challenge. It's just that some places have been in it longer and are arguably better off when it comes to water.”

Water rates are going to go up in cities where part of the supply comes from the Colorado River via the Central Arizona Project Canal. It’s cheaper to move 2 million acre-feetA unit of volume equal to the volume of a sheet of water one acre in area and one foot in depth; 43,560 cubic feet. of water than it is to move 1 million acre-feet. That’s not going to cause a jump in your bill.

Cities may step up conservation campaigns to stretch their supplies. And cities in the ground water replenishment district can expect their bills to go up “quite significantly,” according to Porter. (They won’t see that cost on their water bill, but on their property tax bill.)

“A lot of water policy has been designed to take us away from the edge of the knife and take us as far away as we reasonably can be,” Porter said. “We're on the edge, but we really are trying to plan out decades and decades in advance.”

Top image: A large concrete block once anchored a dock on Lake Mead, at the Temple Bar Marina, seen here in 2016. The shoreline is now several hundred yards away for the Colorado River-fed reservoir. Photo by Charlie Leight/ASU News