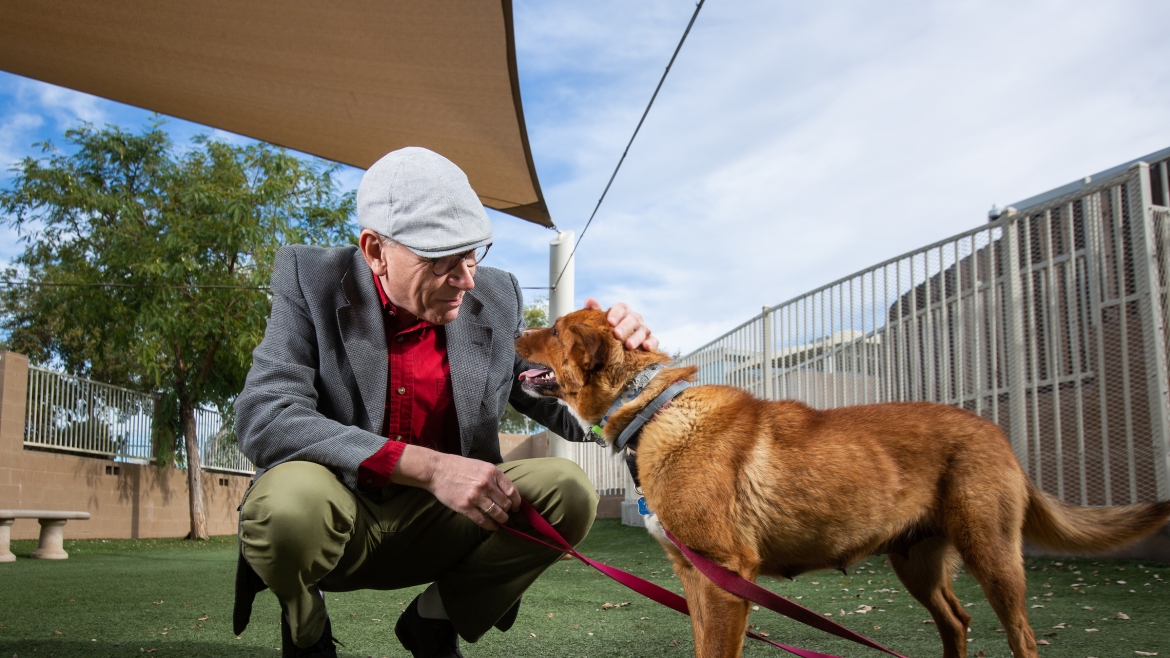 Among animal behavior researchers, the concept of social hierarchy is more or less taken for granted. Most social species have one, though the degree of extremity can vary greatly. While baboons exhibit strict dominance relations, often resorting to violence to keep the pecking order, female lionesses have been known to exhibit more egalitarian behaviors, often willingly sharing resources and even mates.

When it comes to the one animal humans most commonly share our homes with — dogs, of course — celebrity trainers like Cesar Millan have popularized the concept of dominance, which assumes humans must establish their dominant status through harsh means. The argument against that method assumes dogs don’t recognize dominance at all, leaving no room for interpretation of the subtle nuances of the unique social hierarchy of a human-dog household.

That’s unfortunate, says ASU dog behavioral expert Clive Wynne, because a better understanding of that dynamic could ultimately improve our relationships with our canine counterparts. In his most recent paper, published in Frontiers in Psychology, Wynne conducts an extensive review of existing research on dominance in dogs and concludes that yes, they do experience it, but how it plays out among themselves is very different from how it plays out when they live with humans.

“Most people’s experience of dogs is that they are very loving companions,” said Wynne, who directs the Canine Science Collaboratory at ASU. “So how do we square that circle? How do we reconcile that when dogs live with dogs, they have very strong social hierarchies, but when they live with people, it doesn’t feel that way at all?”

His theory: Humans occupy a position of “super dominance” over dogs. That is, when dogs live with humans, we control so many of their resources and basic needs — down to when and where they can relieve themselves — that they have no choice but to show us deference.

“The way dogs live with us is rather exceptional,” Wynne said. “As I say in the paper, I believe the reason dogs are so loving toward us is because they are able to recognize that we have a social status in our shared household that is so high that all they can do is kowtow to us.”

That doesn’t mean they don’t enjoy living with us, though.

“’Dominance’ sounds bad, but if the dominant individual — the one who controls the resources — is generous with those resources, why wouldn’t a dog be happy with that situation?” Wynne explained. “From the dog’s perspective, it must seem totally magical. I’d imagine it’s a better situation than living on the streets, anyway.”

And since our dogs already know who’s the boss, there’s no need to resort to severe displays of dominance when they misbehave. Instead, Wynne suggests positive reinforcement training, which teaches dogs to associate desired actions with rewards.

The idea that humans need to actively assert dominance over their dogs comes from outdated observations of unrelated adult wolves living in captivity. In that unnatural condition, wolves did exhibit aggression and competition with each other. At the time, researchers extrapolated that the same must be true of dogs, since wolves are their wild ancestors.

However, the natural living condition of most wolves is in a familial pack, and in his paper, Wynne cites studies that have shown they actually exhibit less aggression and competition with one another than dogs who live together.

Wynne theorizes the main reason for this is because wolves are hunters and dogs have evolved to be scavengers. And while hunting and catching live prey requires cooperation and results in a surplus of food that cannot be saved, so may as well be shared, scavenging is more successfully done on one’s own; another dog trying to scavenge the same trash can is competition, not support.

Yet, when scavenging is removed from the equation — as it is when dogs live with humans who provide their food — so too is the necessity to assert dominance to ensure the procurement of a resource. This, Wynne argues, demonstrates another way dominance is misunderstood: Rather than a personality trait of an individual, it is a property of interactions between several individuals.

More simply put, there is no such thing as an alpha dog. As long as its needs are being met by its human, any dog would be happy to play the subordinate role. In fact, Wynne cites studies that found some telling ways dogs communicate hierarchy among each other that can also be observed in human-dog relationships.

In groups of dogs, subordinate group members will often pass their head under the chin of dominant members, which Wynne sees reflected in pet dogs’ contentment at accepting pats on the head by their masters. And of course, any dog owner can tell you how much their pups love to give them kisses; this behavior is also seen among groups of dogs, with subordinate members showing deference by licking the corners of the mouths of dominate members.

“The moral takeaway,” Wynne said, “is that we need to recognize the responsibility we have as the dominant individual in this partnership and treat our dogs magnanimously.”

The craft brew industry has boomed over the past few years, and new research by an Arizona State University professor shows that while the brewers would like to use sustainable practices, many don’t think that consumers would be willing to pay a lot extra to support those efforts.“Brewing is quite resource-intensive, and the number of craft brewers has hugely increased. We had 1,500 12 years a... 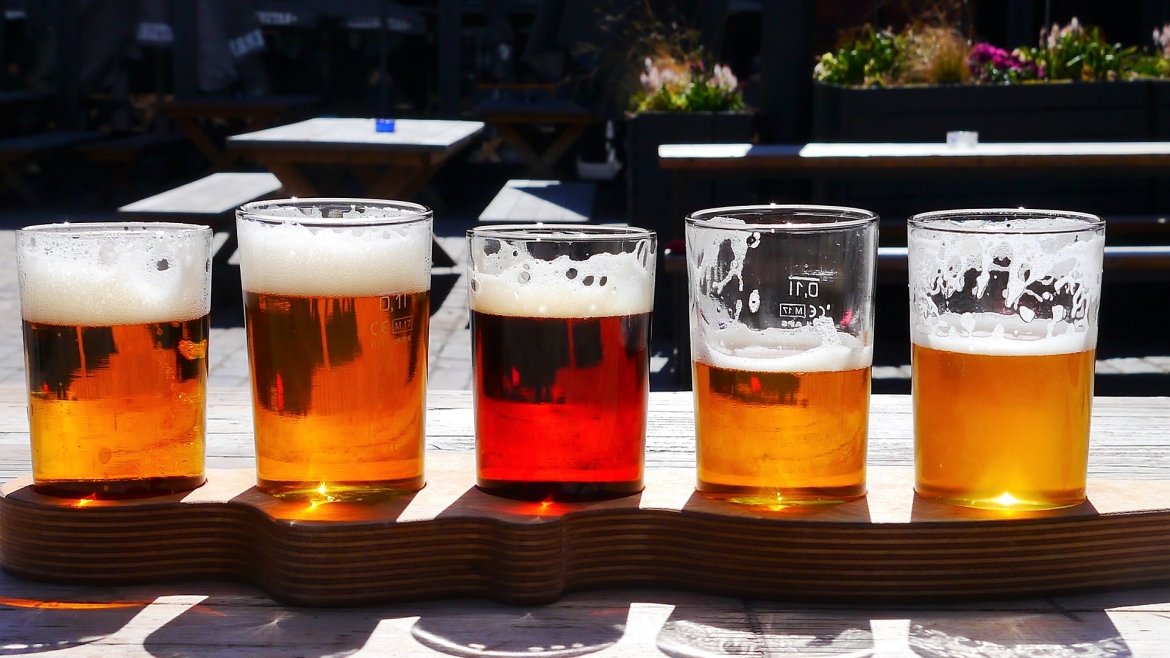 The craft brew industry has boomed over the past few years, and new research by an Arizona State University professor shows that while the brewers would like to use sustainable practices, many don’t think that consumers would be willing to pay a lot extra to support those efforts.

“Brewing is quite resource-intensive, and the number of craft brewers has hugely increased. We had 1,500 12 years ago and now it’s over 7,000,” said Carola Grebitus, an associate professor of food industry management in the Morrison School of Agribusiness at Arizona State University’s Polytechnic campus.

“Brewing is very water-intensive, and we were thinking about what that might mean,” said Grebitus, who also is a senior sustainability scholar in the Julie Ann Wrigley Global Institute of Sustainability and Innovation at ASU. Her paper, "Sustainable development in the craft brewing industry," was published recently in the journal Business Strategy and the Environment.

Her co-author in the study was Alicia Rosburg, associate professor of economics and Provost's Fellow for Sustainability at the University of Northern Iowa. That university offers the Iowa Green Brewery Certification, which provides technical assistance and guidance on environmental issues to small-scale brewers.

“So we are both in sustainability, and we wanted to know about this business that is still relatively young,” Grebitus said.

“The National Brewers Association has a lot of material on sustainability available to their members, so we wanted to know what they’re doing, and if they are doing something, in terms of recycling or energy use, are they tracking it?”

The two created a survey and then administered it to 29 craft breweries in Iowa, asking questions about sustainability practices and the brewers' perceptions of whether consumers would pay extra for those efforts. While the sample size of this study was small, Grebitus said that she and Rosburg are seeking a grant to expand the survey to many more craft brewers.

One of the biggest takeaways from the results is that even when the brewers are using sustainable practices, they’re not always tracking the results. While 80% track energy and water use, fewer than two-thirds kept track of recycling and wastewater, and about a third tracked trash headed to the landfill.

Grebitus said that many of the brewers were arranging to have farmers pick up their “mash,” the grain byproduct left over from the beer-making process, which can feed livestock.

“But they’re not tracking that much, and we see room for improvement because if you don’t track something, you don’t know what’s happening,” she said.

The survey also found that 90% of the brewers believe that consumers will pay a small premium to support a brewer that achieved a certain sustainability level, about 1% to 5% more, but likely not more than that.

The researchers speculated that one reason that brewers aren’t prioritizing planning and tracking of sustainability measures is simple: They’re too busy.

Grebitus teaches the “Business of Beer” class at the Polytechnic campus, along with Tim Richards, who holds the Marvin and June Morrison Chair in agribusiness. The course teaches business principles focusing on different aspects of the beer industry, and brings in many guest speakers.

“Every single brewer that comes in is incredibly busy,” she said. “They wear so many hats.

“They might have to go in in the middle of the night because the brewing process is done and otherwise, the beer will go bad.”

The message is that startups should consider a sustainability plan from the beginning.

“If you start with certain things at the beginning — set up the mash transport, pay attention to water usage, check for energy leaks in your brewery — that can do a lot for you,” she said.

Grebitus believes that brewers are craving guidance on this issue.

“I have letters from 15 or 20 different brewers, and they would be so invested if we got the funding to bring this survey to a national scale,” she said.

“It’s an amazing industry with such hard-working, compassionate people, and it’s refreshing because it’s not just about the profit.

“They care about their product and are constantly trying to improve.”