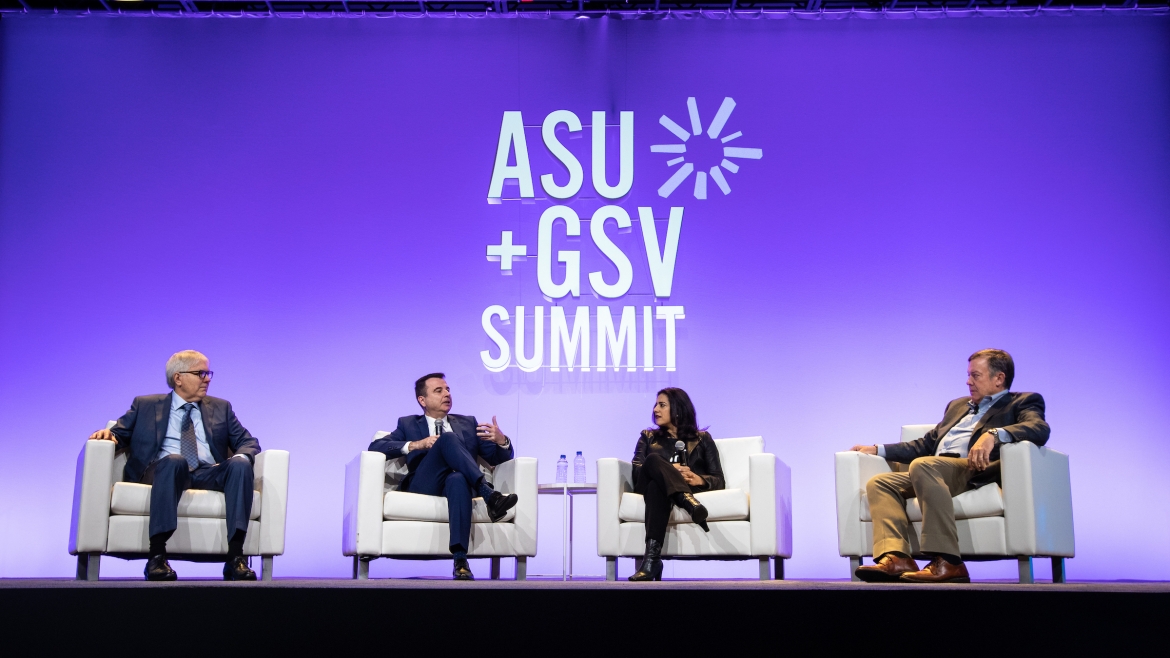 The ASU+GSV Summit — an annual convening of leading minds focused on transforming society and business through learning and work — will offer innovation and insight to both virtual and in-person audiences Aug. 9–11.

The summit, taking place at the Manchester Grand Hyatt in San Diego, began in 2010 with a collaboration between Arizona State University and Global Silicon Valley with the guiding principle that all people have equal access to the future. In the years since, the summit has tackled topics such as K–12, higher ed, workforce, emerging technology, and equity, access and justice.

Organizers expect close to 3,000 in-person and 15,000 virtual leaders across the global education and workforce innovation sector to be in attendance. Virtual registration is free and can be submitted at asugsvsummit.com/2021-virtual.

“Technology and innovation have unbelievable potential to radically evolve access to education and learning,” said ASU President Michael Crow, who will be delivering a keynote presentation. “This summit is a chance for creative minds — across education, the workplace, our communities — to share ways they’ve found to empower learners. Educational equity has the power to shape our world so much for the better, and it’s crucial that we find new and better ways to achieve it.”

At the Tuesday evening reception, LEAP Innovations CEO Phyllis Lockett will speak with Alena Analeigh, a 12-year-old, first-year ASU student majoring in mechanical engineering and founder of the Brown STEM Girl Foundation. Alena’s organization supports and empowers girls of color around the world in their pursuits of interest in science, technology, engineering and math.

The summit will include the GSV Cup pitch competition for pre-seed and seed-stage education technology startups for $1 million in prizes. More than 700 startups have been judged by over 150 venture capitalists across the globe. The top 10 will compete at the summit, and the audience will vote for the winners.

Members of the ASU community are involved in some of the hundreds of sessions on offer at the summit. Here's a sampling:

Crow will be part of several sessions:

The 2020 summit, which was held virtually for the first time, welcomed over 15,000 attendees from more than 135 countries, including leading educators, innovators, investors, strategists, media and policy makers across the "Pre-K to Gray" global education and skills sectors.

Arizona State University music alumnus David Earll, who graduated with a Doctor of Muscial Arts in tuba performance in 2014 and is an assistant professor of tuba and euphonium at Ithaca College, was a featured artist at the virtual Finger Lakes Environmental Film Festival, an annual multi-arts, interdisciplinary, cross-media festival in Ithaca, New York, dedicated to showcasing global media proje...

Arizona State University music alumnus David Earll, who graduated with a Doctor of Muscial Arts in tuba performance in 2014 and is an assistant professor of tuba and euphonium at Ithaca College, was a featured artist at the virtual Finger Lakes Environmental Film Festival, an annual multi-arts, interdisciplinary, cross-media festival in Ithaca, New York, dedicated to showcasing global media projects focusing on issues pertaining to sustainability.

Now in its 24th year, the film festival is held at Ithaca College and is directed by faculty member Patrician Zimmerman, an accomplished pianist and tuba enthusiast. 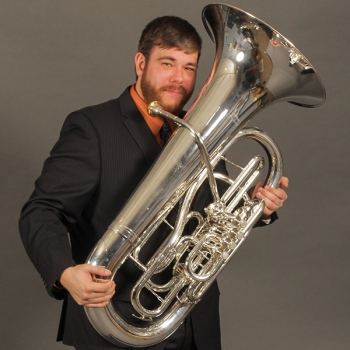 “I was introduced to Zimmerman when I first arrived at Ithaca and performed a piece for tuba and trumpet at the festival,” Earll said. “When my album was released in October, Zimmerman contacted me to include my album launch in the next film festival as a featured event.”

“One of the neat things that came out of their conversation was that Zimmerman also asked David to compose and record the main music theme for the event,” Swoboda said. “So, with every film that is shown, you hear tuba music that is an original composition by David. The solo tuba piece that opens and closes the film was also his composition.”

Earll said albums of tuba and euphonium music might seem uncommon to the casual music consumer but recording albums has recently become part of developing a professor’s or performer’s professional portfolio.

“Winding Pathway,” published on the Potenza Music label, was recorded in Arizona at Tempest Recording with sound engineer Clark Rigsby and was produced by Swoboda. ASU alumna Gail Novak was the pianist. The album is available on Apple music, Spotify and Amazon.

Earll initially began his album project in Arizona, recording pieces for job applications. After graduation he entrenched himself in his first teaching position in Wisconsin but realized he had recorded enough work for almost half an album. He decided to complete the album and incorporated more current electronic media and tuba pieces that had become his specialty while touring with ensembles. As he became more familiar with DeMars’ pieces and a new English composer Andy Scott, he selected DeMars, Pilafian and Scott as the heart of his album project.

When completion of the album was delayed due to COVID-19, Earll took the time to focus on recording rights and selecting a title.

“Something good that came out of quarantine and COVID is tapping into our own creativity – having enough time for ideas to come and enough time to actually finish projects that we've started,” Swoboda said. “We shift, we pivot and find new ways. Boredom is the foundation of creativity and sometimes you need that quiet space. This was one of those times for David that’s significant and really great.”

“One of the writers I follow online, Matt England, wrote about the idea that creativity is like breathing,” Earll said. “When you create something, you breathe out. But if you breathe out forever you will die. So, to regain the ability to breathe out, you have to breathe in. This is what the time of COVID has been for a lot of people – a chance to breathe in and fuel that exhale with new energy, and different energy that you can find outside of the energy of creating.” 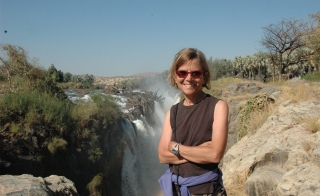