Broadband continues to lead discussions at the national level in the United States. From the call for a $100 billion investment in the The American Jobs Plan back in March 2020 to a more recent bipartisan infrastructure framework that sets aside $65 billion to bring high-speed internet into rural communities, the topic of broadband access has surfaced to the forefront of the nation’s agenda.

This shift has cast a much needed spotlight on the “digital divide” — or the disparity between the need for reliable, high-speed internet access and the availability, adoption and utilization of it for many communities. 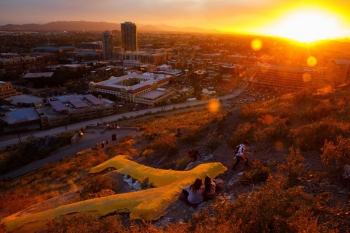 As part of this ongoing conversation and work about the digital divide, a diverse group of partners and organizations from across Arizona spearheaded by Maricopa County Supervisor Bill Gates — including the Institute for Digital Progress, Arizona State University, Arizona Commerce Authority and the Sun Corridor Network — hosted a series of four Lighting Up the Future events over the past two months. This speaker series united like minds to not only imagine but progress toward a future where broadband is readily available to all and the digital equity gap is narrowed.

Following the kick-off event, three sessions — "The Availability Gap," "The Adoption Gap" and "The Utilization Gap" — drew out key ideas across these interrelated themes, marking the distinctions between some of the concepts that are not always practically defined but are critically important to address.

According to BroadbandSearch, about 32% of Arizona residents have no internet access at home, even though nearly 98% of the population could access wired or wireless connections. But “access,” as ASU Chief Information Officer Lev Gonick explained, is a technical term; the Federal Communications Commission map of the United States will show a general area as having internet access, even if only one house in said area has connectivity.

“Availability” is a different story. It implies that multiple households in an area have “fixed access,” which relies on cable or other physical means to bring internet connection directly to a house, rather than relying on public locations or mobile hotspots. The “availability gap,” therefore, is the place where residents have no fixed access to the internet.

Attendees to "The Availability Gap" session collectively identified tribal lands as areas sorely lacking in fixed access. A lack of funding and infrastructure was often cited as a primary reason. But problems weren’t just identified; solutions were also discussed.

Many diverse ideas were brought to the table, but a common thread was the need for community anchor institutions that link areas without fixed access to the broader broadband infrastructure.

These ideas related to a summary statement from Gonick: “Our goal is to leverage collective insights, partnerships, university connections, museums, libraries and private organizations to have robust, high quality broadband for all in order to participate in 21st-century Arizona.”

However, availability does not guarantee the efficient and meaningful adoption of new technologies. As Erin Carr-Jordan, head of social impact of EdPlus at ASU, reiterated, the “adoption gap” is three times larger than the availability gap. This number highlights another layer to address: that even when high-speed connections are available, the adoption of them is severely lacking. Known as the adoption gap, it disproportionately affects tribal communities, lower income households, the elderly and people with disabilities due to cost, digital literacy and readiness.

“We need legislation that looks at the issue with cultural responsibility,” Carr-Jordan said.

“The digital divide was exacerbated by COVID,” she added, explaining that the pandemic revealed just how in need many communities were for widespread adoption. A crucial part of closing the adoption gap is found in digital literacy, which is the ability to use the internet to find, evaluate, create and use online communication.

Digital literacy spans multiple uses of the internet, including the ability to do homework, conduct research, search for local resources, read the news, enjoy entertainment, look for jobs and more. In short, digital literacy impacts every facet of the internet that other parts of the state, country and world utilize daily.

Groups at "The Adoption Gap" session identified ways that both the public and private sectors can close such a gap, and what barriers face them. Public institutions can focus more heavily on digital literacy education and training, while private organizations can leverage their public relations reach to partner with such institutions. However, they both face political realities that foster lots of discussion but little action, as one team put it.

Carr-Jordan gave a hopeful conclusion, however.

“Our schools, libraries, tribal communities, religious organizations and more are our greatest resources, and we can all work together,” she said.

While availability indicates true, fixed access and adoption refers to the skills that allow users to use high-speed connections once they have access to it, utilization takes the digital divide concept to the day-to-day process of engaging with the internet.

The task of embedding internet use into the daily lives of people who have learned, worked and lived without it is complex. The final session of Lighting Up the Future demonstrated that, as Daniel Gutwein, director of the N50 Project at Intel, led a conversation about the “utilization gap."

Across the world, 3.9 billion people do not currently participate in the digital world, but about 3.4 billion of them can connect and do not do so, according to Gutwein. In other words, those 3.4 billion people have availability to access the internet. The reasons they don’t connect are diverse, which include the aforementioned availability (infrastructure/personal cost) and adoption (digital literacy).

The core hypothesis of the N50 Project, Gutwein said, is “if we can provide human-enriching applications with a good experience, at an affordable cost (or free), people will become digitally literate, and overall participation will increase.”

He went on to define “human-enriching applications” as those that improve education, health care, agriculture, entrepreneurship and other opportunities defined by communities.

The closure of the utilization gap builds on the work being done to close the availability and adoption gaps, which doesn’t follow them but rather works in tandem. Attendees to "The Utilization Gap" identified common ways they engage with a digital world that has become increasingly important with remote needs, including telehealth, schooling and work. They then came up with ways these uses could be improved, with answers ranging from time management to virtual reality experiences.

Finally, a vision of what the digital world can look like in 2030 expressed all of the concepts discussed during all of the Lighting Up the Future events. In many of the attendees’ views, the internet can be a more accessible portal that connects to the real world and empowers everyone, regardless of background, occupation, place of residence or economic class.

The discussions had during “The Availability Gap,” “The Adoption Gap” and “The Utilization Gap” weren’t just theoretical, however. All of the invested professionals that attended Lighting Up the Future bring their expertise and knowledge to the public and private sectors in which they work and make demonstrable impact on the digital world.

People don't generally associate toothbrushing with Alzheimer's disease. But in his latest research, Abhishek Shrivastava, assistant professor in the School of Life Sciences and the Biodesign Institute at Arizona State University, is exploring how these two things are indeed connected.All humans have bacteria in their mouths. If we don't brush our teeth often, there will be a higher number of bact...

People don't generally associate toothbrushing with Alzheimer's disease. But in his latest research, Abhishek Shrivastava, assistant professor in the School of Life Sciences and the Biodesign Institute at Arizona State University, is exploring how these two things are indeed connected.

All humans have bacteria in their mouths. If we don't brush our teeth often, there will be a higher number of bacteria found in our mouths. Research has shown that this can lead to certain proteins being present, and these proteins can travel to the brain and potentially lead to Alzheimer's disease. 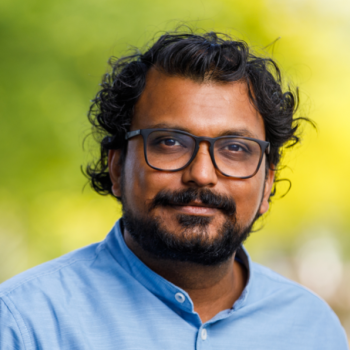 Abhishek Shrivastava, assistant professor in the School of Life Sciences and the Biodesign Institute, and his collaborator, David J. Durgan, assistant professor of anesthesiology and cellular and molecular physiology at the Baylor College of Medicine, were selected as one of six multidisciplinary teams to receive the 2021 Scialog Collaborative Innovation Award for their project that looks at how bacterial outer membrane vesicles act as modulators of microbiota-brain communication involved in the development of neurological diseases. Download Full Image

In his lab, Shrivastava will be examining two questions: How do these proteins make it to the brain? And what are the delivery vehicles?

Shrivastava and his collaborator on the project, David J. Durgan, assistant professor of anesthesiology and cellular and molecular physiology at the Baylor College of Medicine, were selected as one of six multidisciplinary teams to receive the 2021 Scialog Collaborative Innovation Award.

“We are incredibly proud of Dr. Shrivastava for being selected as a recipient of the Scialog Collaborative Innovation Award,” said Kenro Kusumi, dean of the natural sciences in The College. “The high impact work of the Shrivastava Lab on the connection between microbiome and neurodegenerative diseases is a prime example of the innovation taking place within the School of Life Sciences and the Biodesign Institute. This well-deserved award will enable Dr. Shrivastava and his team to continue driving transformation and to innovate for biomedical discovery.”

The award stemmed from the first-ever Scialog: Microbiome, Neurobiology and Disease virtual conference in April that brought together more than 50 scientists from a variety of disciplines to propose cutting-edge research to help transform our understanding of the gut-brain axis at the chemical, microbial and immunological level.

During the two-day conference, attendees met different scientists from the U.S. and Canada and attended seminars to identify someone they would like to collaborate with. Through this process, Shrivastava met Durgan and they came up with the idea to look at how bacterial outer membrane vesicles act as modulators of microbiota-brain communication involved in the development of neurological diseases.

“What was encouraging about this award was to receive funding for an idea — which I think is kind of high-risk, high-reward in a sense,” Shrivastava said. “To have the freedom to implement that was very satisfying. Even more than that, having a collaboration of the kind that I have established through this at a different university was very helpful.”

Shrivastava’s background is in biophysics and microbiology, and he is interested in bacterial motilityThe ability of bacteria to move independently using metabolic energy. and bacterial protein secretion mechanismsThe cellular devices used by pathogenic bacteria to secrete their virulence factors (mainly of proteins) to invade the host cells., as well as how the microbiome impacts human health.

In his lab, Shrivastava has eight people contributing to research including three postdoctoral students, three PhD students, one master's degree student and one undergraduate student.

The $55,000 award will support Shrivastava’s research for one year. Shrivastava and Durgan will simultaneously complete complementary experiments and, depending on the outcome, they plan on applying for additional grants.