Seventy-five years ago, in the summer of 1946, President Harry Truman signed an executive order to officially terminate the War Relocation Authority (WRA). The WRA had been created four years prior in 1942 to move Japanese Americans from the West Coast and into involuntary confinement during World War II.

Two such confinements, now more widely known as Japanese internment camps, were located in Arizona on the Colorado River and Gila River Indian reservations — against the will of tribal officials. Much of the history that is known about these camps has been lost to poor documentation or lack of interest in the stories of those directly involved until recent years. Now, some faculty members at Arizona State University are diving into this past to see how it can inform us now and in the future. 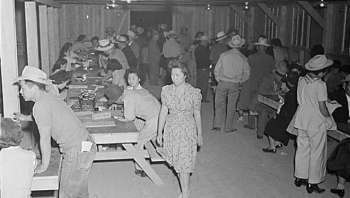 Karen Leong, associate professor of women and gender studies and Asian Pacific American studies, had been working on a project to collect the oral histories of Japanese Americans who settled in Arizona and the Japanese American War Relocation program, and Myla Vicenti Carpio, associate professor of American Indian studies and a citizen of the Jicarilla Apache Nation, was researching the experiences of American Indians in Albuquerque, New Mexico, and the Bureau of Indian Affairs’ urban relocation program. They happened to look at each other’s documents and began seeing similarities.

“That’s when we realized that both federal agencies shared personnel, as well the goals of dispossession and relocation,” Leong said.

It wasn’t long after they started diving deeper into the documents that they realized that the federal government’s attempt to end the reservation system shared deep ideological and economic motivations with the removal and relocation of Japanese Americans during World War II.

“One of the World War II prison camps initially was run by the BIA, but eventually both prison camps on American Indian reservations in Arizona were under the direction of the WRA,” Leong said. “The archives demonstrated a definite link between the relocation of Japanese Americans during the war and the development of the Urban Indian Relocation Program that sought to move American Indians off the reservation and into industrial employment during the late 1950s.”

Leong and Carpio secured several grants to explore these interactions, including funding from the Institute for Humanities Research, the School of Historical, Philosophical and Religious Studies, and the Charles Redd Center for Western U.S. History.

“Exploring our shared past offers hope of an authentically shared future,” said Catherine O’Donnell, history professor and faculty head. “Professor Leong's work, like many important public history projects, allows us to hear each other's stories and think together about what obligations they impose on us, as Arizonans and simply as people.”

Leong and Carpio began to develop an oral history project to explore the interactions between the Indigenous community at Gila River and the Japanese Americans who were incarcerated there. But it was difficult to find individuals who were alive during that time and willing to discuss their experiences working at the camps.

“Most of the individuals directly involved had already passed on, so the project has become much more archival in focus,” Leong said. “The untimely passing of one of the collaborators resulted in our being unable to follow through on that project, but we were able to edit a special issue of Amerasia Journal that related Asian American and Indigenous experiences of the U.S. and the use of incarceration to further dispossess and control already marginalized populations.”

Another obstacle they ran into while conducting research was the lack of documentation, as well as the specific documents donated to the archives that paint alternate narratives.

“At the National Archives the documentation dealing with the Gila River Indian community was sparse and sometimes the folders were empty,” Leong said. “Dillon S. Meyer’s (second director of the WRA and later the BIA director) collection at the Truman Library is limited to three boxes, most of which are filled with Japanese prison camp information, documentation and positive letters about the camps. There was very little in his papers about the American Indian Urban Relocation Program.”

As the project adapted, it continued on with main goals in mind. One goal is to demonstrate how the U.S. has relied on the dispossession and forced relocation of marginalized populations throughout its history in order to maintain a form of democracy where populations can benefit from inclusion and others are maintained as marginalized. Another goal is to explore how the U.S. both differentiates groups under similar ideologies of inclusion or dispossession.

“For example, our research suggests that American Indians and Japanese Americans were located in opposition to each other,” Leong said. “American Indians were portrayed by the U.S. nation-state as not knowing how to make land productive while Japanese Americans were portrayed as being highly capable farmers. Yet, both groups shared similar experiences of being relocated physically, dispossessed of resources and expected to fit into a certain ideal of being American.”

They hope that these specific examples allow different groups to relate to each other by identifying what they have in common and fighting against the ways they are told they differ or are in competition with each other.

“This research reveals a shared history that raises deep questions for U.S. democracy,” Leong said. “Democracy is a wonderful concept but it takes commitment and intention to realize its full potential for all people.”

“Unless we acknowledge the founding violence of the U.S., we will not be able to realize the promise of U.S. democracy,” Leong said.

Former Sun Devil Soccer standout Jemma Purfield has signed a contract to play for Leicester City Women (LCFC), according to an announcement by the team on Monday. ... Former Sun Devil Soccer standout Jemma Purfield has signed a contract to play for Leicester City Women (LCFC), according to an announcement by the team on Monday.