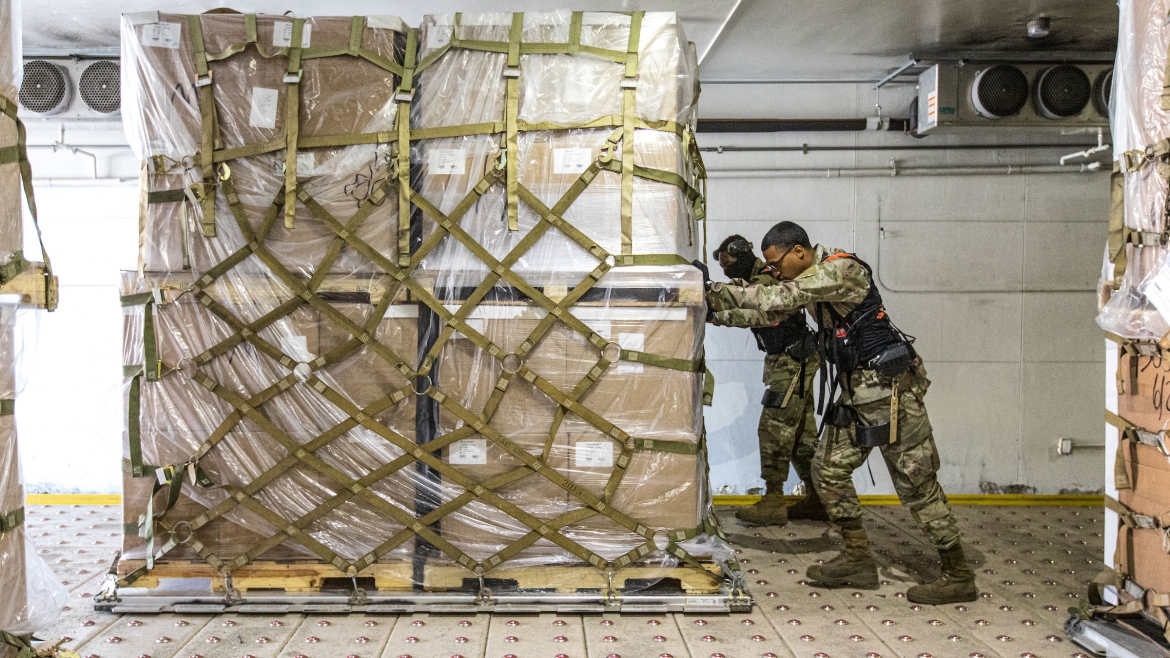 Although it may not yet be at the level of Iron Man’s exoskeleton, a new power and endurance device from Arizona State University is giving U.S. Air Force aerial porters enhanced levels of safety and strength on the job.

“The fundamental purposes of APEx are worker wellness and making pushing and lifting easier and safer,” said Thomas Sugar, an ASU professor of systems engineering and primary investigator on the project.

“APEx is an exoskeleton designed to assist people with loading a 10,000-pound pallet and then pushing it onto an airplane.”

The APEx project was created based on the U.S. Department of Transportation’s 2019 Volpe Center study, which revealed that more than $31 million is spent annually in disability benefits for retired aerial porters, who had a high incidence of musculoskeletal injuries.

“Our unique ideas included designing a device that would allow it to be disengaged and out of the way when walking, running, sitting or crawling to allow free movement and not be a hinderance,” said Sugar. “But when activated, the device assists pushing and lifting with up to 30 newton metersA newton meter is a unit of torque. One newton meter is equal to approximately 0.738 pound-feet. per leg in a lightweight, 8-pound device.”

Working in teams of four during the testing, the porters stacked pallets of cargo weighing up to 10,000 pounds — mostly personal protective equipment and vaccines headed to Asia as part of President Joe Biden’s humanitarian efforts — and loaded them onto planes.

W. Brandon Martin, an Air Force Reserve officer, is an ASU doctoral student who has been developing the device as his PhD project. Martin was on-site at Travis Air Force Base in California for eight weeks during testing in May and June. Martin worked with aerial porters from the 60th Aerial Port Squadron to monitor APEx performance and make adjustments based on worker feedback.

In speaking about the testing process, Martin said, “The awesome thing was that the people who had already worn the exoskeleton were giving pointers to the individuals who had not, so they developed their own institutional knowledge of how to use the robot.”

Tech. Sgt. Landon Jensen, transportation manager from Air Mobility Command at Scott Air Force Base in Illinois, worked with the team through development. He managed the testing operations at Travis.

“The first time I tried it on was at ASU,” said Jensen. “When I put it on, I realized there was more potential there than I thought there was originally. Their original design of the suit was very close.” 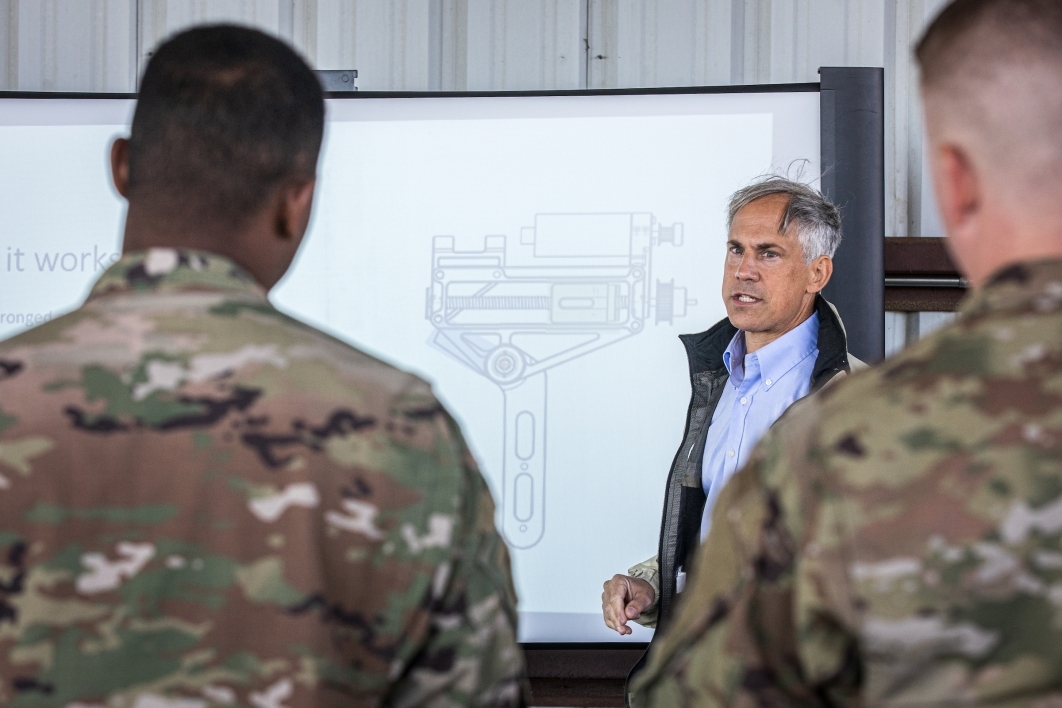 ASU engineering Professor Tom Sugar talks about how the APEx robotic exoskeletons work June 10 at Travis Air Force Base. The devices — created to to address the high injury rate of aerial porters — have both passive elements (hip stabilizers) and active ones (leg assistance) that offer enhanced lifting and pushing support. 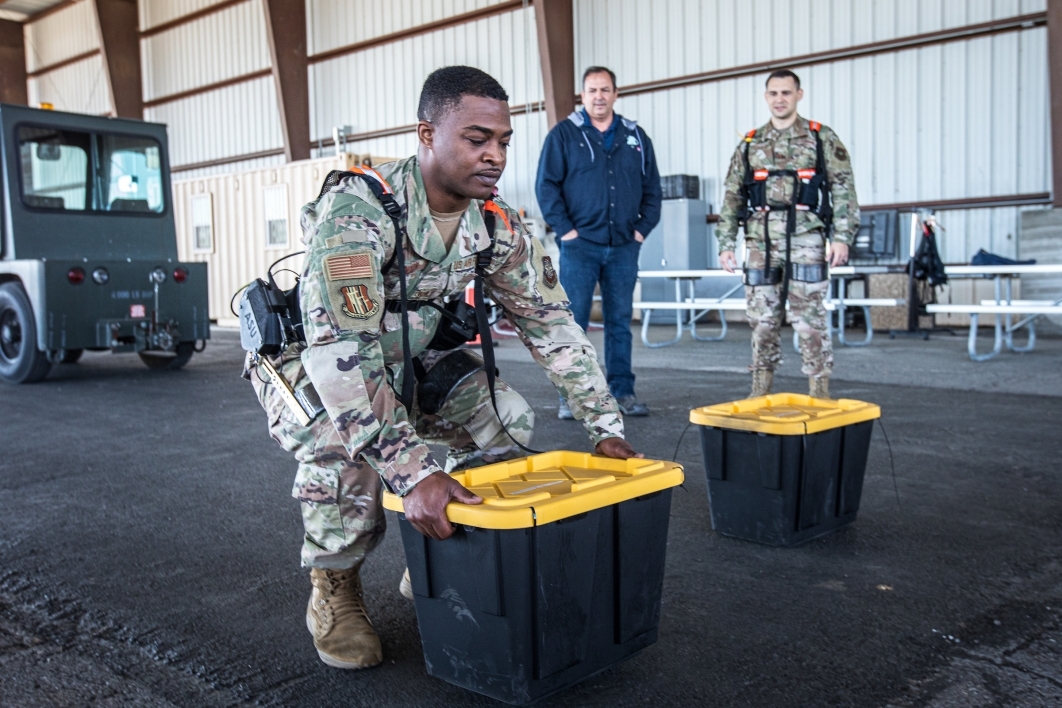 Staff Sgt. Brian Dixon lifts a 50-pound tub with the assistance of the APEx robotic exoskeleton. Dixon is a safety technician with risk management. 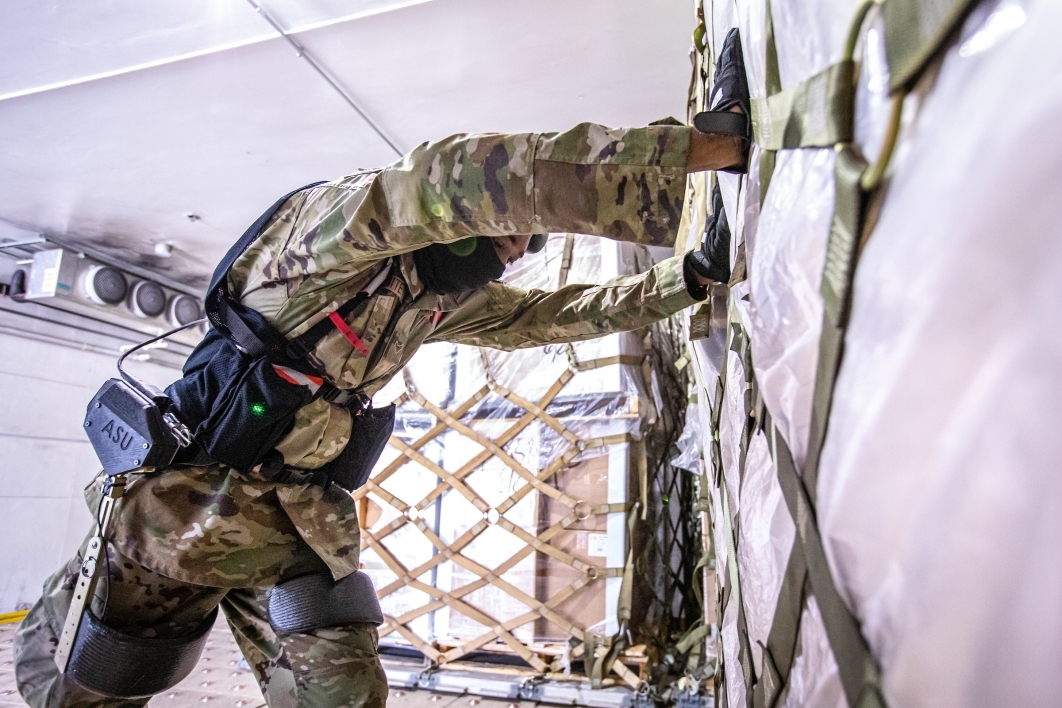 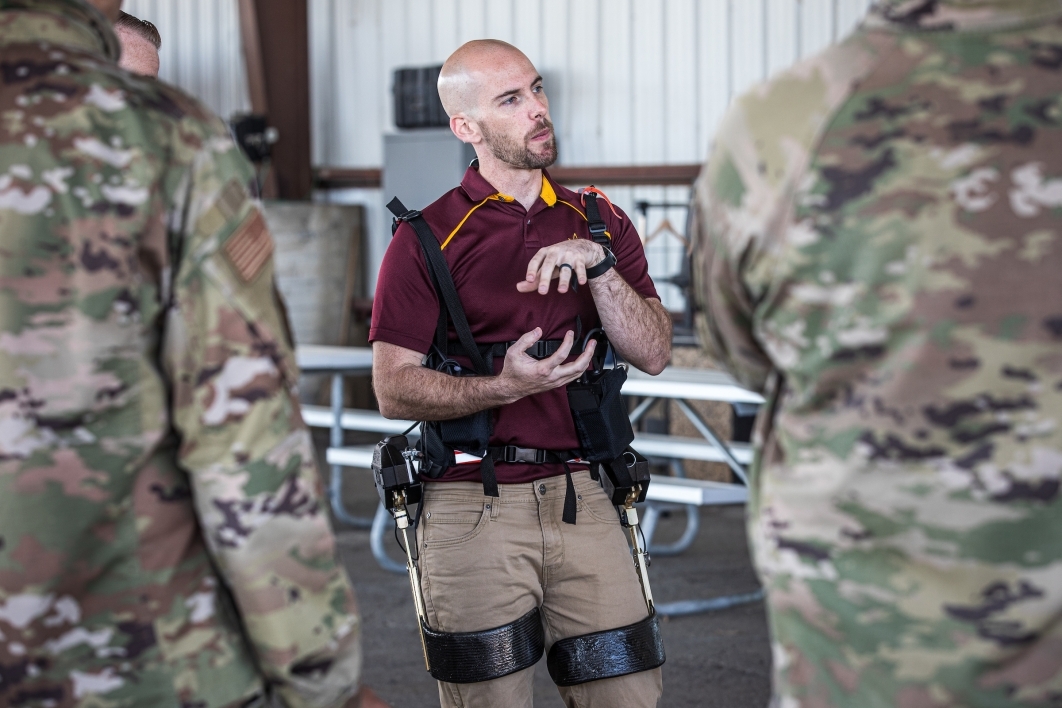 “ASU has been very receptive to that feedback,” he said. “I think ASU legitimately wants what’s best for the airmen and the Air Force. The relationship has been fantastic. It allows us to create something that we can actually use.”

The contract was funded under the Department of Defense Rapid Innovation Fund, which awards contracts to develop innovative technologies that can be rapidly inserted into programs that meet needs and are designed to include small businesses in the research process. RIF is administered by the undersecretary of defense for research and engineering, small business and technology partnerships.

“The Volpe study showed that aerial porters had a high incidence of muscular skeletal injuries resulting in large workers-compensation costs,” said Sugar. “We were asked to develop an exoskeleton that can assist pushing heavy equipment onto an airplane and lift objects for palletizing.”

The $1.2 million project created for the Air Mobility Command at Scott Air Force Base, was administered by Lt. Col. Saily Rodriguez from the Human Systems Division of the Agile Combat Support Directorate at Wright-Patterson Air Force Base in Ohio.

Kevin Hollander, who received his PhD from ASU in 2005, has more than 20 years’ experience developing prosthetic, orthotic and exoskeleton devices. He was a design consultant on the project for subcontractor Augspurger Komm Engineering.

Joe Hitt, a former lieutenant colonel in the Army and the CEO of project subcontractor GoX Labs, served as a design subcontractor focusing on measuring the users’ performance. Hitt received his PhD from ASU in 2008.

Alex Boehler, who received his master’s degree from ASU in 2008, is a systems engineering doctoral student who developed the device electronics as his doctoral project.

Meet Mike Friend, who has been an awesome Sun Devil Club member. ... Meet Mike Friend, who has been an awesome Sun Devil Club member.