Carbon Collect’s MechanicalTree selected for US Department of Energy award

A passive carbon-capture system, based on the research of Klaus Lackner, an engineering professor at Arizona State University and director of the ASU Center for Negative Carbon Emissions, and commercialized by Carbon Collect Inc., based in Dublin, is among six projects being funded in a Department of Energy (DOE) program targeting carbon-capture and sequestration technologies.

The DOE program is providing a total of $12 million to the six projects, with $2.5 million going to the Carbon Collect-ASU team. The projects are creating tools that will increase the amount of CO2 captured by direct air capture (DAC), decrease the cost of the materials used and improve the energy efficiency of the carbon-removal operations. 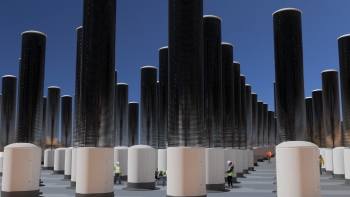 “This is a significant and pivotal step for our company that will also serve to accelerate our technical program and its research and development efforts,” said Carbon Collect’s Chairperson Gary Dirks, who also is senior director of ASU’s Global Futures Laboratory and the Julie A. Wrigley Chair for Practice of Sustainable Energy Systems at ASU’s College of Global Futures.

“We expect this project to be an important step for the commercialization of a technology that can be scaled to help balance the world’s carbon budget,” added Carbon Collect CEO Pól Ó Móráin. “The award will demonstrate how this technology can contribute to the CO2 drawdown that will be needed to keep global warming in check.”

The MechanicalTree is based on proprietary technology developed by Lackner, a pioneer in the field of direct air capture. It acts like a tree that is thousands of times more efficient at removing CO2 from the air. The “mechanical trees” allow the captured gas to be sequestered or sold for reuse in a variety of applications, such as synthetic fuels, enhanced oil recovery or in food, beverage and agriculture industries.

Unlike other carbon-capture technologies, the MechanicalTree can remove CO2 from the atmosphere without needing to draw air through the system using energy-intensive devices. Instead, the technology efficiently captures carbon as wind blows air through the system from any direction. This makes it a passive, relatively low-cost and scalable solution. If deployed at scale, the technology could lead to significant reductions in the levels of CO2 in Earth’s atmosphere, helping to combat global warming.

Carbon Collect is committed to deploying this technology for gigaton-scale capture across a wide range of geographically diverse settings in the U.S. and abroad, Ó Móráin said.

Two research teams, using data from the European Space Agency’s Mars Express orbiter, have recently published results suggesting that what were thought to be subsurface lakes on Mars may not really be lakes at all. In 2018, scientists working with data from the Mars Express orbiter announced a surprising discovery: Signals from a radar instrument reflected off the red planet’s south pole appe...

Two research teams, using data from the European Space Agency’s Mars Express orbiter, have recently published results suggesting that what were thought to be subsurface lakes on Mars may not really be lakes at all.

In 2018, scientists working with data from the Mars Express orbiter announced a surprising discovery: Signals from a radar instrument reflected off the red planet’s south pole appeared to reveal a liquid subsurface lake. Several more such reflections have been announced since then. 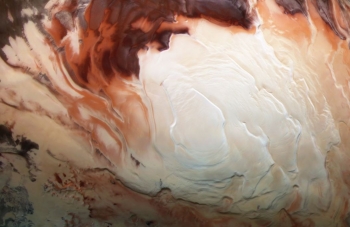 In a new paper published in the American Geophysical Union’s Geophysical Research Letters, lead author and graduate student Aditya Khuller of Arizona State University’s School of Earth and Space Exploration with Jeffrey Plaut of NASA’s Jet Propulsion Laboratory (JPL), describe finding dozens of similar radar reflections around the south pole after analyzing a broader set of Mars Express data. But many are in areas that should be too cold for water to remain liquid.

The question of whether the signals are liquid water or not is also being considered by a team of scientists led by ASU School of Earth and Space Exploration postdoctoral scholar Carver Bierson. Their research was also recently published in AGU’s Geophysical Research Letters and determined that these bright reflections might be caused by subsurface clays, metal-bearing minerals or saline ice.

Mars Express is the second-longest-surviving continually active spacecraft in orbit around a planet other than Earth, behind only NASA's still-active 2001 Mars Odyssey. As Mars Express orbits Mars, it continues to provide important data on the red planet’s subsurface, surface and atmosphere.

Onboard this spacecraft is an instrument called the Mars Advanced Radar for Subsurface and Ionosphere Sounding, or MARSIS for short. This instrument uses a radar sounder to assess the composition of the subsurface of Mars.

MARSIS has been collecting data around Mars since 2004, including the south pole, allowing scientists to build a three-dimensional view of the south polar region. “We wanted to look beneath the south polar ice and characterize the old terrain lying underneath using MARSIS data,” said Khuller.

In other recent studies using MARSIS data, researchers have found areas where the reflections below the surface are brighter than that of the surface, which is not what scientists would expect.

“Usually, radar waves lose energy when they travel through a material, so reflections from deeper down should be less bright than those from the surface,” said Khuller, who is concurrently on an internship at JPL under Plaut’s direction. “Although there are a few possible reasons for unusually bright subsurface reflections, these two studies concluded that a liquid water component was the cause of these bright reflections, because liquid water appears bright to radar.”

The radar signals originally interpreted as liquid water were found in a region of Mars known as the South Polar Layered Deposits, named for the alternating layers of water ice, dry ice (frozen carbon dioxide) and dust that have settled there over millions of years. These layers are believed to hold a record of how the tilt in Mars’ axis has shifted over time, just as changes in Earth’s tilt have created ice ages and warmer periods throughout our planet’s history. When Mars had a lower axial tilt, snowfall and layers of dust accumulated in the region and eventually formed the thick layered ice sheet found there today.

The areas originally hypothesized to contain liquid water span about 6 to 12 miles (10 to 20 kilometers) in a relatively small region of the Martian South Polar Layered Deposits. Khuller and Plaut expanded the search for similar strong radio signals to 44,000 measurements spread across 15 years of MARSIS data over the entirety of the Martian south polar region.

The new, expanded study from Khuller and Plaut revealed dozens of additional bright radar reflections over a far greater range of area and depth than ever before. In some places, they were less than a mile from the surface, where temperatures are estimated to be minus 81 degrees Fahrenheit (minus 63 degrees Celsius) — so cold that water would be frozen, even if it contained salty minerals known as perchlorates, which can lower the freezing point of water. 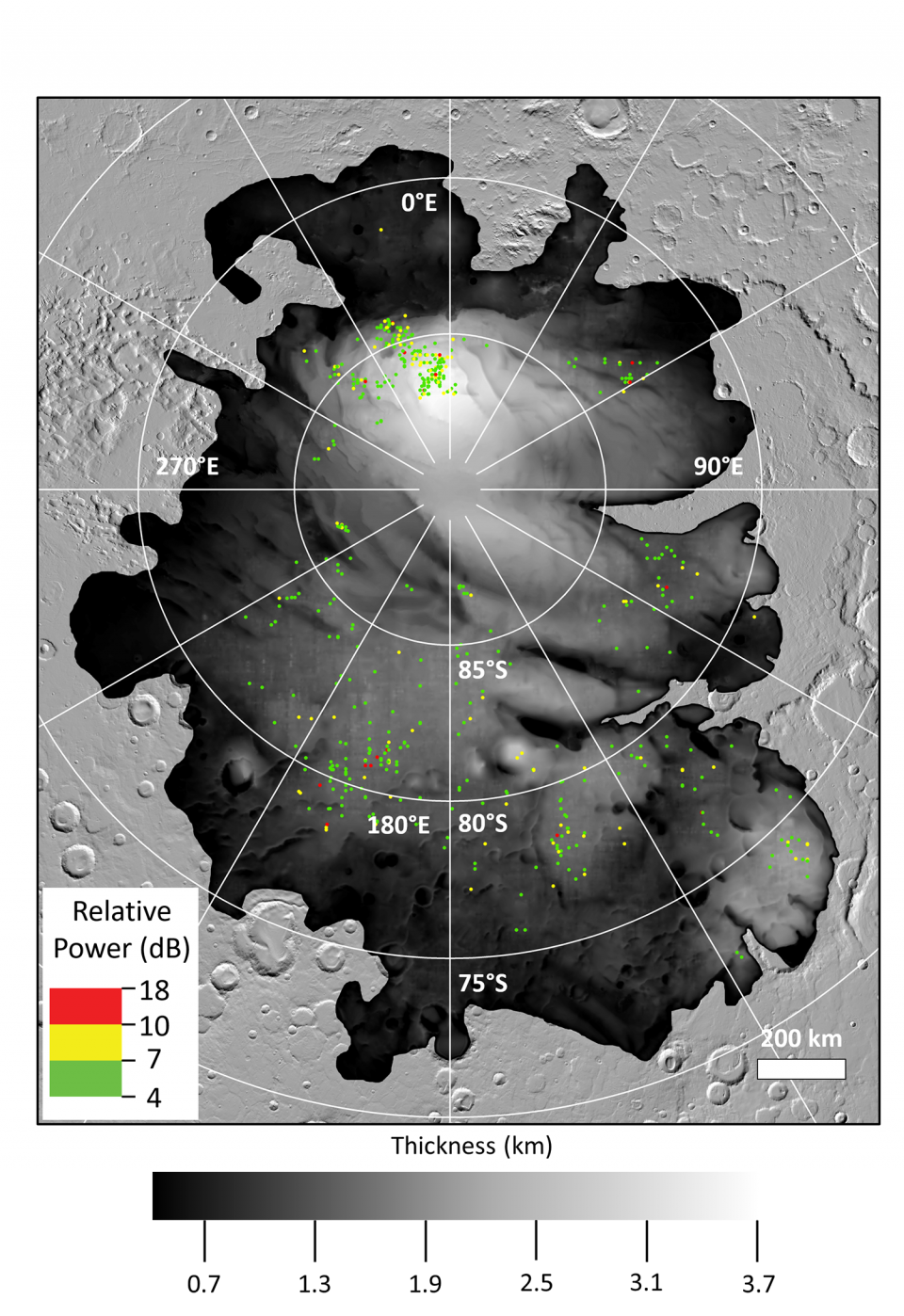 “We’re not certain whether these signals are liquid water or not, but they appear to be much more widespread than what the original paper found,” said co-author Plaut, who is also the co-principal investigator of the orbiter’s MARSIS instrument. “Either liquid water is common beneath Mars’ south pole, or these signals are indicative of something else.”

Additionally Khuller noted a 2019 paper in which researchers calculated the heat needed to melt subsurface ice in this region, finding that only recent volcanism under the surface could explain the potential presence of liquid water under the south pole.

“They found that it would take double the estimated Martian geothermal heat flow to keep this water liquid,” Khuller said. “One possible way to get this amount of heat is through volcanism. However, we haven’t really seen any strong evidence for recent volcanism at the south pole, so it seems unlikely that volcanic activity would allow subsurface liquid water to be present throughout this region.”

Khuller and Plaut’s next steps in this line of research are to investigate their discovery of a second, deeper layer under parts of the south pole of Mars, which scientists think represents an older buried terrain called the Dorsa Argentea Formation. It is thought to have been modified by ancient glaciers once present across the region, and they intend on trying to more accurately determine its composition and age.

This article was written by Andrew Good of NASA’s Jet Propulsion Laboratory with contributions from Karin Valentine of ASU’s School of Earth and Space Exploration.