Enzymes are one of the most important biological compounds because they make life possible by increasing the speed of reactions inside and outside cells. In cells, enzymes carry out functions such as protein synthesis, DNA replication and energy production.

To do these and other activities, enzymes are both complex and specific. For example, lactase is the enzyme that breaks down lactose, a sugar found in milk, into simpler sugars, glucose and galactose. However, the enzyme lactase will not break down the sugar maltose; the enzyme maltase does that. 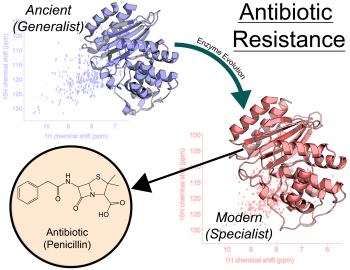 The specificity and complexity of enzymes makes them difficult for researchers to study or design enzymes for new applications. Arizona State University researchers Tushar Modi and Banu Ozkan of the Department of Physics, and Wade Van Horn and Mubark Mebrat, both of the School of Molecular Sciences, along with colleagues from other institutions, report on a breakthrough that improves understanding of the relationship between protein structure, dynamics and function. Their results have important implications for medical, biotechnological and molecular research.

Their article, "Hinge-shift mechanism as a protein design principle for the evolution of β-lactamases from substrate promiscuity to specificity," published in Nature Communications, focuses on the structure and function of beta-lactamase, a protein enzyme in bacteria that breaks down the structure of beta-lactam antibiotics, such as penicillin and amoxicillin, that are used to treat bacterial infections.

In their quest to understand how bacteria develop antibiotic resistance, these scientists determined that rather than requiring a separate gene to code for each enzyme, mutations — which result in changes as minor as one amino acid in the protein structure — can shift the location of a hinge where the protein moves (i.e., dynamics), allowing it to better fit an existing molecule, or even interact with a completely new molecule.

“This study provides evidence that the conformational dynamics of a protein is modulated, if not determined, not by the general structure but by the combination of its flexible and rigid regions,” School of Molecular Sciences graduate student Mebrat notes. “This suggests that over an evolutionary timeline, proteins may retain their general structures and by adjusting flexible and rigid regions can modulate function. In the case of beta-lactamase, bacterial organisms can reemploy the same enzyme to degrade different antibiotics or degrade with greater specificity and efficiency.”

A dynamics-based approach to unraveling protein evolution and function can also be applied to engineering proteins that are more effective.

“Enzyme design is the most difficult task in protein design," Ozkan said. "Indeed, the majority of designed enzymes are significantly less efficient than natural enzymes.”

These designed enzymes can be employed to degrade plastics or fight infections, among other things. Additionally, understanding how antibiotics are degraded can help molecular scientists engineer antibiotics that are less susceptible to bacterial resistance in the future.

“A major problem that has arisen over the last century is antibiotic-resistant bacteria,” Van Horn said. “This study offers insights into an enzyme that degrades antibiotics, which is important for the development of new and more effective drugs.”

Sun Devil Baseball and the Major League Baseball community are mourning the loss of former Sun Devil player and long-time MLB fixture Scott Reid, who passed away at the age of 74 this week. ... Sun Devil Baseball and the Major League Baseball community are mourning the loss of former Sun Devil player and long-time MLB fixture Scott Reid, who passed away at the age of 74 this week.