Did you know that the New Mexico meadow jumping mouse can grow to 7 to 9 inches long? 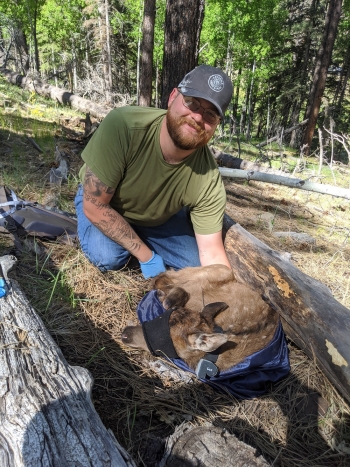 Obermeit collaring an elk calf in the White Mountains of Arizona in May 2020. Download Full Image

ASU graduate and Phoenix native Tyler Obermeit does. Something else he knows about this small mouse is that it is, unfortunately, an endangered species. Shrinking habitat space has left these mice with few options for places they can call home.

Luckily though, for this species of mouse, Obermeit has recently been hired by Arizona Game and Fish to study them. Obermeit’s goal? To learn more about the mouse so that people can know what actions to take to keep it off the endangered species list.

“It's a mouse that hibernates for nine months a year. So it has like three months to wake up, have babies and get enough food in that for the next winter. And they've been endangered pretty severely,” Obermeit said.

During his time at ASU, spring 2021 graduate Obermeit studied natural resource ecology and wildlife tracking with a certificate in wildlife management.

Before coming to ASU, Obermeit served in the U.S. Army as an infantryman. He was deployed to Afghanistan for a year and struggled to adapt to life back at home after experiencing combat for so long.

After taking a few different jobs and facing some hardship, Obermeit decided that going back to school would be the best fit for him. He chose to study at ASU, where he also joined TRIO Veterans Upward Bound, a program designed to help veteran students adjust to life as college students.

His interest in the outdoors grew as he studied at ASU, and eventually he became interested in wildlife restoration. Obermeit also served as the president of ASU’s Wildlife and Restoration Student Association.

“We are the joint student chapters of the Wildlife Society, the American Fisheries Society and the Society for Range Land Management,” Obermeit said.

The association's mission is to inspire, empower and enable wildlife professionals to sustain wildlife populations and habitats through science-based management and conservation.

“What I've been trying to do for the past two years, as president of this club, is just to get students out there engaging hands-on with wildlife and wildlife professionals,” Obermeit said.

Originally, Obermeit was a conservation biology and ecology major. After taking habitat management for a small wildlife class with Professor Stan Cunningham, he decided to pursue a certificate in wildlife management and joined the Wildlife and Restoration Student Association.

“He was really instrumental and convinced me to move over to this side of things where it was much more wildlife technician based, much more hands-on,” Obermeit said.

According to Obermeit, the student organization played a big role in how he got to where he is today.

“The wildlife society has just been, you know, wonderful for me,” he said.

As a first-generation student, Obermeit was aware of the importance of applying for scholarships. While at ASU he earned multiple scholarships, including from the national association of Veterans Upward Bound, Vietnam Veterans of America Mesa Chapter, Western Association of Education Opportunity Personnel and the New American University award.

Answer: It was actually back when I was a conservation biology major. It was the first time I captured a black-footed ferret. And like having this thing in the cage, I'm like, "Oh my God, I'm holding an endangered species." And that was like what I do. That’s what I wanted to do for the rest of my life, is work with wildlife.

A: I was really intimidated when I first enrolled at ASU because, you know, I'm like 29 years old, I graduated in 2009, I joined the Army. I've been out of the classroom, I think, eight years. And so I was very intimidated, especially in a STEM field, freshman year, when you’re taking these bio and chemistry courses that just wholesale fail out half the class, and I was terrified.

I'm thinking, "Holy crap, here's all these honors students who are failing out." And then I ended up with an A+ in the class. And I think that's when I realized it's not this whole thing of how smart you are, it's how hard you work and what you put into it. And what put me at an advantage versus those other students is that I had a work ethic that was instilled in me from the military and working, you know, blue-collar jobs and stuff like that. I guess the thing is, it's like, there's nothing that hard work and dedication can’t accomplish.

A: I was looking at a list of majors of the three major schools … and when I saw the conservation biology and ecology major, I thought I could be a game warden with that degree and be involved in law enforcement. Not that I enjoy law enforcement. It's just that that seemed like an easy transition from military life and everything I was doing. I got involved, and I'm like, "I don't want to do law enforcement, I want to do research." So something where I'm interfacing more with wildlife and people. You know, that was always really attractive to me.

A: Well, there's a few things. One, if I would have gone to college when I was 18 years old, I would be on a completely different path. And I feel it's a little bit ridiculous to ask somebody at 18 years old what they want to do for the rest of their life, because I look back at an 18-year-old me and he was not very smart. One of the things is like, this isn’t high school anymore. The main thing is for students to take it seriously, but at the same time also not over-stress. You have to find that good balance but also dedicate yourself as if it was a full-time job.

A: I've just been hired with Arizona Game and Fish to be an intern working with an endangered species of mouse called the New Mexico meadow jumping mouse. …

And they've been endangered, pretty, pretty severely, and then they live in wetlands. And so what I do is I do track plating, I set up a box with some sticky paper and an ink pad and peanuts. And so the mouse comes in, eats the peanuts and leaves little red footprints. And then I go and I check the footprints and (with) trapping, you could potentially kill the animal if you lost that trap or they froze it out overnight. So this leaves footprints, and they have a very unique footprint. So I track mice, and I figure out where their habitat is. And it's in some of the most beautiful areas and remote areas of the White Mountains and these mountain meadows, and it's incredible.

A: I would pour that money probably into our forests. For example, the wildfires last year, that's not just a climate change thing, that is 100 years of bad forest policy of putting out every fire and ranching and all these other things. So I would put that military-level spending into maintaining our forests as to how they're supposed to exist in the natural state — and ecological restoration in general.

The Sun Devil women's basketball team will be spending Thanksgiving weekend in Mexico where they will play three games in three days at the 2021 Cancun Challenge. ... The Sun Devil women's basketball team will be spending Thanksgiving weekend in Mexico where they will play three games in three days at the 2021 Cancun Challenge.