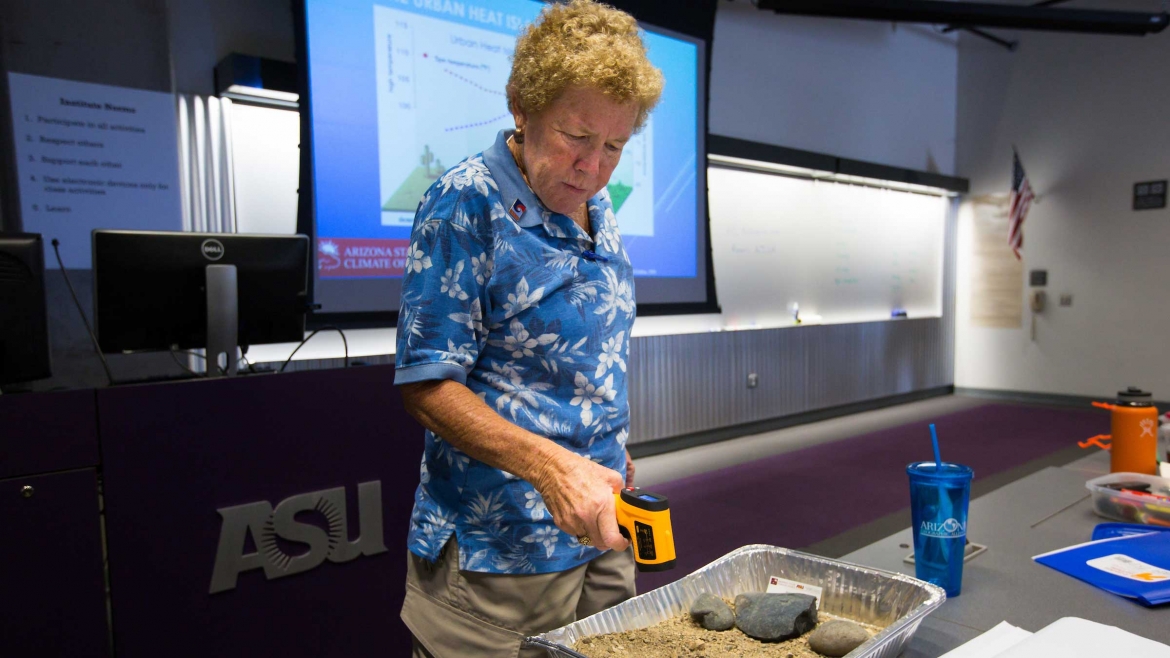 At her core, Nancy Selover is a storyteller, and she's arguably the biggest evangelist of Arizona weather and its patterns for the past 20 years. 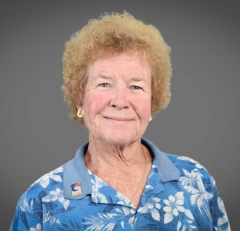 From advising state officials on drought conditions to teaching elementary school students about rainfall and runoff, Selover — Arizona’s state climatologist and a research professor in the School of Geographical Sciences and Urban Planning — dedicated her career to building a bridge between meteorological science and meaningful action, and she shared the joys of Arizona weather and climate with anyone willing to listen.

“The most fun I have is being able to go around the state and talk to people about weather and climate, and I'll go,” Selover said with a smile in a recent Zoom interview from the Arizona State Climatology Office. “I would go anywhere in the state if somebody wanted to hear from me.”

After more than two decades, Selover retired from her post this year. Her work has sparked important dialogue for groups critical to Arizona’s drought and emergency management planning, and her independent assessments of data and research have informed the public and news outlets about critical meteorological issues from monsoon storms to drought to urban heat.

“Nancy’s tenure as state climatologist for Arizona has been nothing short of phenomenal,” said Randy Cerveny, President’s Professor in the School of Geographical Sciences and Urban Planning and the chief rapporteur of climate extremes for the World Meteorological Organization. “Her work in complying, certifying and disseminating a literal warehouse full of climate information collected across this state has provided climatologists throughout the entire world — myself included — the unparalleled ability to conduct groundbreaking research on our desert climate, and in particular our Southwest monsoon. We simply couldn’t have done it without Nancy.”

The impact of air

While Selover, a social person, had always enjoyed connecting with people from a young age, her path to finding the meteorological sciences was a circuitous one.

Selover earned a bachelor's degree in technical theater in 1973 and rose through the ranks of the theater world for 15 years, until, at age 36, she decided to follow an innate affinity for science and go back to school for aeronautical engineering.

In an undergraduate mechanics of materials class at ASU, she learned about the forces of air and the conditions in which it can crumple the metal frames of airplanes. Her curiosity was piqued.

“I became way more interested in the air than in the airplane,” Selover recalled. “That idea that just air could do that much damage was really interesting to me, so I moved over to meteorology, and I've been happy ever since.”

Selover became a research professor for ASU’s geography department and was named the assistant state climatologist in 1999. She was appointed state climatologist by then Arizona Gov. Janet Napolitano in 2007, and she has been at its helm ever since.

Over the course of her tenure, Selover committed herself to making science more accessible and to sharing knowledge with both scientists and nonscientists to help in climate-related decision-making.

She was a key adviser to state and city agencies, private businesses, researchers and the public, regularly giving presentations on the latest climate data, and she served on numerous committees, including the technical monitoring committee of the Statewide Drought Task Force and the State Hazard Mitigation Planning team, which both are influential in shaping the state’s drought monitoring and emergency preparedness efforts.

“Nancy has an innate ability to inform and educate. She’s able to share her knowledge and expertise in a way that is understandable,” said Susan Craig, a water policy analyst with ASU’s Morrison Institute for Public Policy who worked alongside Selover on the Governor’s Drought Task Force. “She had a big influence on the direction of the monitoring technical committee and the way the group would operate and its role in determining drought declarations.

“She’s really caring and wants to make a difference — just the kind of person you want to work with and are motivated by.”

“Dr. Selover has been committed to making climatological science and drought information available to nonexpert audiences, including residents, stakeholders and decision-makers. This is something that I believe makes her stand out among scientists. Nancy is very approachable and easy to talk to.”

She also is an author of more than two dozen research papers and has taught hundreds of students in classes exploring everything from storm chasing to physical geography to meteorological instrumentation and measurement. Selover mentored undergraduate and graduate students and was a proponent of educational outreach programs, advising dozens of elementary, middle school and high school teachers on climate science curriculum.

Additionally, Selover was a frequent climate spokesperson both locally and nationally informing the public through news appearances, always with her signature smile, passion and enthusiasm.

“Nancy was my doctoral student many years ago, and I absolutely love it when I can say this: She is without question another exemplary model of my many past students where the work and accomplishments of the student has greatly exceeded that of the mentor,” Cerveny said. “I am so unquestionably proud of her accomplishments. Simply put, she has been one of my very best.”

As Selover looks past her role as state climatologist, she plans to use her time to help people in ways outside of climatology.

“I like working with horses, and I like seeing special-needs people get a sense of accomplishment, a sense of control of something in their life,” said Selover, who is an active volunteer with an equine therapy facility for special-needs kids and adults called Robinson Ranch. “When we put them on a horse over a period of time, they become able to control the horse by themselves, they get a real connection and we can see people grow through that.”

Whether distilling climate information or helping children and adults develop new skills, Selover continues a legacy of support to the Arizona community in any way she can.

“I can't say what motivates me, it's just that sense of helping somebody, that sense of providing something that somebody needs,” Selover said, looking back at her career. “It's just part of what gets me going; I’m the helper.”

Top photo: State climatologist Nancy Selover takes measurements of a pan with dirt and stones that had been in the sun for 90 minutes on June 14, 2016, as part of the STEMSS Institute, a two-week training for teachers run by ASU's Geographic Alliance, a nonprofit housed at ASU. They are trained in how to create lesson plans that combine science and geography. Photo by Charlie Leight/ASU News Many good things happened in the 2021 men's golf season. Check it out here...