Religious studies, economics alumna researching what it means to be single, religious around the world

What motivates people? It’s a question asked by many of us, and Arizona State University alumna Anna Broadway is no different. This question has driven her to where she is today, a published writer and researcher, with her most recent credits including The New York Times and The Wall Street Journal.

“I learned a long time ago that writing success has little to do with merit, so I'm just trying to steward this blessing as well as I can,” said Broadway, who writes under a pen name. “It's an extraordinary privilege to carry in trust as many stories as I do and I want to do my best to honor that.” 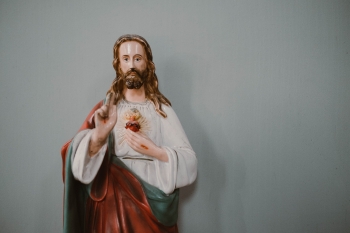 After she graduated high school, she attended a small college in Iowa for a year but realized she needed a school with better opportunities for her in journalism. She enrolled at ASU, and although she didn’t get a degree in journalism, she worked for ASU’s student-run newspaper, The State Press.

“I got interested in religious studies and economics because the two fields seemed to answer the question most interesting to me: what motivates people,” said Broadway.

She began to identify more specific questions she wanted to answer by the end of her undergraduate studies and decided to earn her master’s degree in religious studies from ASU.

She moved to New York City upon graduating in 2002 and wrote her first book, "Sexless in the City: A Memoir of Reluctant Chastity," which was published in 2008. Upon completing the manuscript, Broadway moved and continued working and writing on the side until 2018, when she decided to take on a new project.

“That spring, I quit my job to begin a 17-month research trip on the global experience of singleness, which took me to 41 countries,” said Broadway. “From May 2018 to October 2019, I interviewed Christian singles around the world to learn about their experience of everyday life and church community.”

She interviewed more than 325 people from roughly 40 countries. The interviewees included Catholics, Protestants and Orthodox Christians of all ages and reasons for singleness, including sexual minorities and people with disabilities. It also included a few post-trip phone interviews and some group discussions that included married people.

“Leading writers and scholars like Eric Klinenberg and Bella DePaulo have written book-length works on singleness, but most such projects focus on the secular and American experience,” said Broadway. “As British scholar Valerie Y. Bernard-Allan notes, this also tends to mean the white, female experience. Because the traditional Christian sex ethic calls for sexual abstinence outside marriage and choosing a spouse of the same tradition, I wanted to find out what that means for singles around the world.”

Broadway wanted to avoid this typical narrow focus while conducting research and divided her time between continents. In each city, she tried to interview a mix of men, women, ages and reasons for singleness, and she also sought economic diversity, when possible.

As she collected more and more stories, she was surprised by how uniformly churches struggled to integrate singles, as nearly every congregation tended to be centered around families.

“That has really interesting implications for the church's self-understanding and theology,” said Broadway. “While Christians have traditionally sought to fulfill the so-called ‘Great Commission’ in Matthew 28, I think the reality is that many modern churches focus more on growth through procreation than proclamation.”

Associate Professor of religious studies Jason Bruner found Broadway’s project interesting for both the questions being asked and the way she gathered data.

“Christianity, like many other religious traditions, has changed significantly on a global scale over the past several decades,” said Bruner. “This means that issues of marriage, singleness and sexual ethics are matters of practical concern and theological reflection for Christians in globalizing contexts.

“Anna’s is the first book I know of that attempts to discuss Christian singleness in a global context. It’s a thoughtful and personal account of how Christians globally are thinking about and reflecting upon their identities as both Christian and single, and I think it can be an important resource for scholars, pastors and ordinary Christians to think about these issues anew and in conversation with Christians across the world.”

Now that Broadway has finished her travels for her research, she is working on completing her manuscript.

“Today, religion and moral beliefs play as important a role as ever in life, but religion journalists and broader society need help understanding the ways people's belief systems, institutional or not, inform how they live,” said Broadway. “I think it's a great time to study religion, for those who can ask the right questions.”

She encourages students to “ask the questions that interest you most, even if you have to blaze your own trail,” and she says she is grateful for how the ASU religious studies department has helped her over the years.

“Don Benjamin connected me to the writer who helped me get my first literary agent and has been a support and encouragement over the years since,” said Broadway. “Tracy Fessenden gave me a scholarly review opportunity toward the end of grad school, which gave my writing career an early boost, and Bruner, though he never even taught me, has been a frequent help and adviser throughout my research. You don't always expect that from such a big university, but it's been a real blessing to me.”

Alzheimer's disease is the most common form of dementia and is characterized by neurodegeneration in regions of the brain involved in memory and learning. Amyloid beta and tau are two toxic proteins that build up in the disease and cause eventual neuronal death, but little is known about how other cells in the brain react during disease progression.A new study from the ASU-Banner Neurodegenerativ...

Alzheimer's disease is the most common form of dementia and is characterized by neurodegeneration in regions of the brain involved in memory and learning. Amyloid beta and tau are two toxic proteins that build up in the disease and cause eventual neuronal death, but little is known about how other cells in the brain react during disease progression.

A new study from the ASU-Banner Neurodegenerative Research Center (NDRC) and MIT/Koch Institute sheds new light on how disease processes manifest in patients with Alzheimer's disease. Diego Mastroeni of the NDRC teamed up with Forest White and Douglas Lauffenburger, colleagues in MIT's Department of Biological Engineering, to explore how protein and signaling pathways change in patients with Alzheimer's disease. Their analysis captures a detailed molecular profile of changes in protein levels and alterations known as protein phosphorylation across a cohort of patients with well-preserved brain tissue, from the Banner Sun Health Research Institute. Their work creates a new model of disease progression, taking advantage of the heterogeneity that is inherent to human studies.

“This manuscript highlights the importance of integrating the phosphoproteome with the proteome and transcriptome datasets to get a better picture of the drivers of disease, from transcription to translation,” said Mastroeni. The phosphoproteome refers to proteins that have undergone epigenetic modification through the addition of a phosphate group. The proteome incudes the full complement of all proteins in the body, while the transcriptome refers to the RNA messages produced by genes, which are subsequently translated into proteins.

The new study appears in the journal Nature Aging.

"Our results show that there are a plethora of cellular signaling pathways that are activated at all stages of disease. We may be able to repurpose available therapies to target protein kinases that regulate these cell signaling events," White said. "Clinicians today are studying therapeutic effects on amyloid and tau as proxies for disease, but our results suggest that glia cells are involved at every step of the process. Improved understanding of glia cells and their roles in progressive neurodegeneration may provide new opportunities for treatment of this disease."

“This collaborative effort is the kind of work that we at the NDRC value,” Mastroeni said. “No one individual can tackle this disease on their own; it’s going to take a group effort to combat this devastating illness.”