Professor Mark Lussier, a specialist in Romantic literature and critical theory, has been named the new chair of the Department of English at Arizona State University, effective June 1, 2013.

Lussier assumes the post held previously by professor Maureen Daly Goggin, a rhetorician, who led the department since 2009. Goggin will return to research and teaching after a year of research leave. 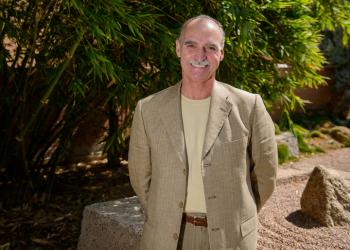 “We are deeply grateful to professor Maureen Daly Goggin for her dedicated work as chair of the English department,” said George Justice, dean of humanities in ASU’s College of Liberal Arts and Sciences, in which the Department of English is the largest humanities unit. “Professor Goggin took on this extremely difficult task and pursued the work with vigor and a deep concern for all the citizens of the English department: our great faculty, students, staff and external partners.”

Justice, a scholar of 18th-century literature, whose tenure home is in English, said of Lussier, “I personally have known Mark for nearly 20 years and I look forward to helping him continue to serve the department, campus and community with the vigor that characterizes his long and distinguished career as a faculty member and ASU community member.”

As chair, Lussier hopes to position ASU’s English department – one of the largest and most productive in the United States – as a hub of interdisciplinary English studies. He will seek resources for a cluster of new initiatives that build upon the department’s strengths in local-to-global outreach, and will work with faculty to reimagine the department’s programmatic structure.

Currently, the Department of English is comprised of several, interrelated programs spanning the art and science of language, including creative writing; English education; film and media studies; linguistics and TESOL (Teaching English to Speakers of Other Languages); literature; and rhetoric and composition.

In addition, English is also the home of the largest writing programs (composition instruction) in the U.S., shepherding some 10,000 ASU students per semester – in hundreds of majors and disciplines – through composition courses.

“It is a singular honor to serve such a distinguished group of scholars and teachers,” said Lussier. “I believe our creative energies and copious talents provide a strong foundation upon which to build a forward-looking unit that pays heed to past concerns, but which is poised to grapple with things to come.”

Lussier, who has taught in the English department since 1994, most recently served as president of the University Senate and chair of the University Academic Council. His other administrative posts at ASU have included directing English’s graduate studies program (1997-2000) and serving as assistant director of the Arizona Center for Medieval and Renaissance Studies (1989-1991). Lussier also served as the senior program officer for the Louisiana Endowment for the Humanities, a state affiliate of the National Endowment for the Humanities, in New Orleans (1984-85). He earned a doctorate in English at Texas A&M University in 1989.

Lussier also has a full research agenda. His monograph, “Romantic Dharma: The Emergence of Buddhism in Nineteenth-Century Europe” (Palgrave/Macmillan, 2011), will be honored by the ASU Institute for Humanities Research this fall. He also co-directed the 2012 International Conference on Romanticism, which was held at ASU last fall and directed the 2006 International Conference on Romanticism, which resulted in the edited collection, “Engaged Romanticism: Romanticism as Praxis” (Cambridge Scholars Press, 2008), published with ASU staff member Bruce Matsunaga. He is currently completing two other books: “The Encyclopedia of Romantic Writers and Writing” (Wiley-Blackwell), co-authored with Dana Tait, and “Blake & Lacan” (Peter Lang). Both will appear in print later this year.

With a heavy heart, we regret to inform the ASU community that First Lieutenant Jonam Russell, an alumnus of the Army ROTC Sun Devil Battalion, was killed in action July 23.

With a heavy heart, we regret to inform the ASU community that an Army ROTC Sun Devil Battalion alumnus has been lost in the line of duty. First Lieutenant Jonam Russell was killed in action on July 23, while conducting a dismounted patrol in the Wardak Province of Afghanistan. 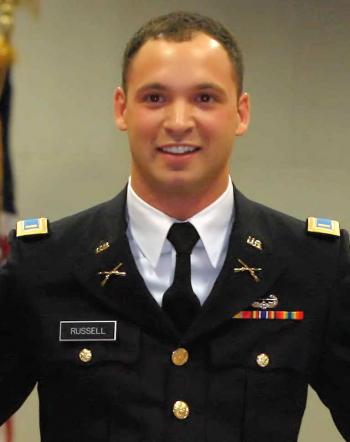 With permission of the family, the ASU Army ROTC will be holding a memorial ceremony at 10 a.m., July 26, in the Old Main Ballroom on the Tempe campus. There will be several guest speakers, including students and Sun Devil Battalion Cadre members who knew him. An invitation is extended to the entire ASU community, alumni, faculty and staff to gather and remember a fallen Sun Devil and brave soldier, who gave his life in service to this country.

If you have any questions regarding the ceremony, call 480-965-3318. A live video feed of the memorial will be braodcast; the link will be provided on the ASU Army ROTC page at facebook.com/asuarmyrotc.