While scientists know the discovery of alien life would be a game-changing, interstellar event for humanity, the search to date has been unsuccessful. But now, they have a new tool capable of identifying molecular biosignatures that will allow them to look for life in the universe — no matter what form it takes.

In a new paper recently published in Nature Communications, a team of scientists describes a universal approach to life detection including a system that could easily be flown on a space probe to find life in our solar system. 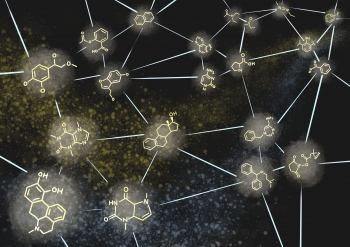 The key innovation enabling these advances is the application of a new theory called assembly theory, developed by Professor Lee Cronin and his team at the University of Glasgow, with a team of scientists from Arizona State University collaborating on the theory development. Applied to molecules, assembly theory identifies molecules as biosignatures because of what life does, not what life is.

“Our system is the first falsifiable hypothesis for life detection and is based on the idea that only living systems can produce complex molecules that could not form randomly in any abundance, and this allows us to sidestep the problem of defining life,” said Cronin, Regius Professor of Chemistry at the University of Glasgow.

Their team developed an algorithm that could assign a complexity score to a given molecule, which they call the molecular assembly (MA) number. The MA number is based on the number of bonds needed to make the molecule. Simply put, large biogenic molecules would have a bigger MA number than smaller molecules or large molecules that aren’t biogenic.

This one is the first complexity measure that is experimentally measurable. And that makes the algorithm especially powerful because it could be proven and tested in the lab by instruments that could be incorporated on future space missions.

“The method enables identifying life without the need for any prior knowledge of its biochemistry,” said study co-author Sara Imari Walker, of ASU’s School of Earth and Space Exploration. “It can therefore be used to search for alien life in future NASA missions, and it is informing an entire new experimental and theoretical approach to finally reveal the nature of what life is in the universe, and how it can emerge from lifeless chemicals”

In their experiments, the team used their method to assign MA numbers to a database containing about 2.5 million molecules. Next, they used a sample subset of about 100 small molecules and small protein fragments (peptides) to experimentally verify the expected correlation between the MA number and the number of fragments generated by a widely used lab instrument that verifies the structure of molecules, called a mass spectrometer.

Collaboration with NASA, ASU and the Glasgow team, led by Cronin, reveals that the system works with samples from all over the Earth and extraterrestrial samples. The samples included a bit of the Murchison meteorite (not of biological origin), and fossil-containing lake sediment samples from the Holocene (30,000 years ago) and the mid-Miocene (14 million years ago).

The team was able to show that life is the only process that can make molecules with high MA numbers. And there is a MA threshold that they were able to demonstrate that — once crossed — indicates life was necessary to produce the molecule.

“Living and non-living systems are set apart by the degree to which they can reliably, and in detectable abundances, assemble highly complex molecular structures,” said Doug Moore, postdoctoral research associate at the Beyond Center at ASU and co-author of the study.

“We set out to show that this is the case and propose a biosignature that is both biochemically agnostic and practically useful.”

Beyond detecting aliens, the theoretical framework the team has developed is one of the first techniques that can quantify the consequences of information processing — a fundamental attribute of life — in chemical systems, and it can be experimentally measured.

“We think this will enable an entirely new approach to understanding the origin of living systems on Earth, other worlds, and hopefully to identifying de novo living systems in lab experiments,” said ASU alumnus Cole Mathis, postdoctoral researcher at the University of Glasgow and co-author. “From a really practical perspective, if we can understand how living systems are able to self-organize and produce complex molecules, we can use those insights to design and manufacture new drugs and new materials.”

A life-detection instrument based on this method could be deployed on missions to extraterrestrial locations to detect biosignatures or detect the emergence of de novo artificial life in the lab. This is important because “developing an approach that cannot produce false positives is vital for the discovery of life beyond Earth, an event that will only happen once in human history,” Cronin said.

This press release was written by Ross Barker with contributions from Kim Baptista.

Every other month, the ASU Alumni Association hosts #FoodieFriday, a virtual food series that invites alumni to start their weekend whipping up a new recipe from the comfort of their kitchen while learning about a Sun Devil-owned culinary business.On May 21, the association, the J. Orin Edson Entrepreneurship + Innovation Institute and Sun Devils across the states prepared plant-based recipes from...

Every other month, the ASU Alumni Association hosts #FoodieFriday, a virtual food series that invites alumni to start their weekend whipping up a new recipe from the comfort of their kitchen while learning about a Sun Devil-owned culinary business.

On May 21, the association, the J. Orin Edson Entrepreneurship + Innovation Institute and Sun Devils across the states prepared plant-based recipes from Sana Sana that were tasty and healthy. Parra Cano’s passion to pursue a degree in the culinary arts stemmed from preparing and cooking food from scratch with her mother and five sisters from a young age. Her family was used to homemade foods, and it was many years before they began introducing processed and convenient foods into their diets.

When Parra Cano’s parents both became diabetic and she was labeled high risk with gestational diabetes for all four of her pregnancies, she began looking at additional ways to treat their conditions. She learned about ancestral, Indigenous food that would be beneficial and adjusted their diets. Weeks later, Parra Cano said she was cleared of diabetes, hypertension and stage 4 liver disease by her doctors.

From these experiences, Parra Cano and Cano started Sana Sana — a food truck, catering company and cooking classes. The name Sana comes from the verb sanar, which means to heal, and that encompassed their goal for starting their business.

“Our main goal is to heal, and it’s not about solely making money, because for us that’s not the bottom line” Parra Cano said. “The bottom line is to help the community. And so, we ended up focusing our efforts more on certain areas or demographics that we wanted to help support, especially demographics who have low access to healthy food and that are most impacted by disease. So, we focus on South Phoenix.”

Did you miss this month’s #FoodieFriday? You can watch the ASU Alumni recording on Facebook.