ASU student-built spacecraft to interact with the public

NASA has selected an Arizona State University-designed spacecraft to fly as an auxiliary payload aboard a rocket launching between 2022 and 2025. It is among 14 small research satellites, called CubeSats, that were chosen for this opportunity through NASA’s CubeSat Launch Initiative.

The ASU CubeSat, named LightCube, is about the size of a toaster and will be deployed to low-Earth orbit (LEO). Its unique feature is that it can be commanded by anyone with an amateur radio license and a ham radio to set off a xenon flash from the spacecraft that will be visible from the ground. 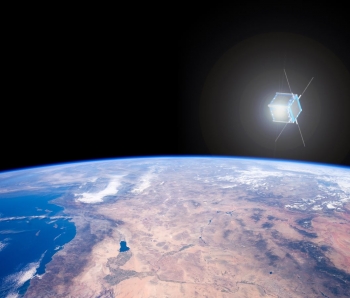 “The public will be able to track the LightCube satellite using an app, then transmit to the satellite with a ham radio. Once the signal has been received, they will see a flash from the satellite in the night sky,” said Principal Investigator Jaime Sanchez de la Vega, of Vega Space Systems, who graduated in 2019 from ASU with a double major in aerospace and electrical engineering from the Ira A. Fulton Schools of Engineering.

The mission is a collaborative project between ASU’s Interplanetary Initiative, the Fulton Schools of Engineering, Vega Space Systems and CETYS Universidad in Mexicali, Mexico.

The hardware for the spacecraft is being developed at ASU’s Interplanetary Initiative lab, with direction from Danny Jacobs, the initiative’s associate director for laboratories. His team will be responsible for the mission’s integration, testing and operations.

The spacecraft will include a UHF antenna led by the CETYS Universidad team, xenon flashtubes, solar panels, an onboard computer, transceiver and a deployable gravity gradient boom that orients the light toward Earth. 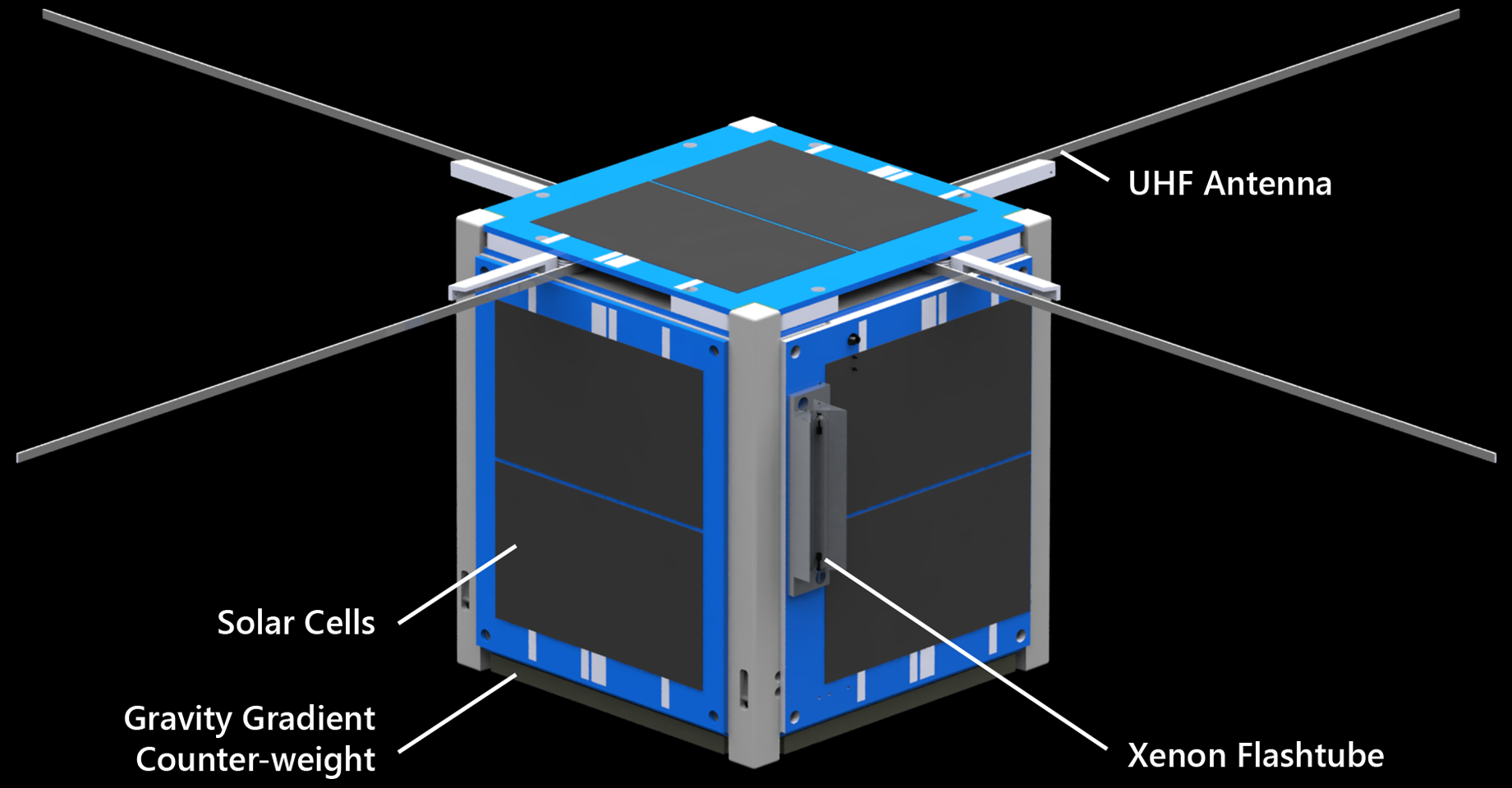 An illustration of the LightCube's exterior. Credit: ASU

“This is an education-based mission,” said Jacobs, who is also an assistant professor at ASU’s School of Earth and Space Exploration. “Our goal in building and launching a spacecraft that can be commanded by the public is to inspire everyone to learn about telecommunications, spacecraft design, atmospheric and climate science, and orbital mechanics.”

At the heart of the mission are several student capstone teams, one from CETYS Universidad and four from ASU’s Fulton Schools of Engineering. The first capstone team to be involved in this project was led in 2019 by Sanchez de la Vega. The 2021 ASU capstone teams are responsible for building the spacecraft’s solar panels, battery and power management subsystems.

These teams are advised by Jacobs and Sanchez de la Vega; Associate Professor Michael Goryll, Professor David Allee and graduate student Raymond Barakat from the School of Electrical, Computer and Energy Engineering, one of six Fulton Schools; and graduate student Kyle DeSousa, who is pursuing a master's degree in innovation and venture development at ASU. 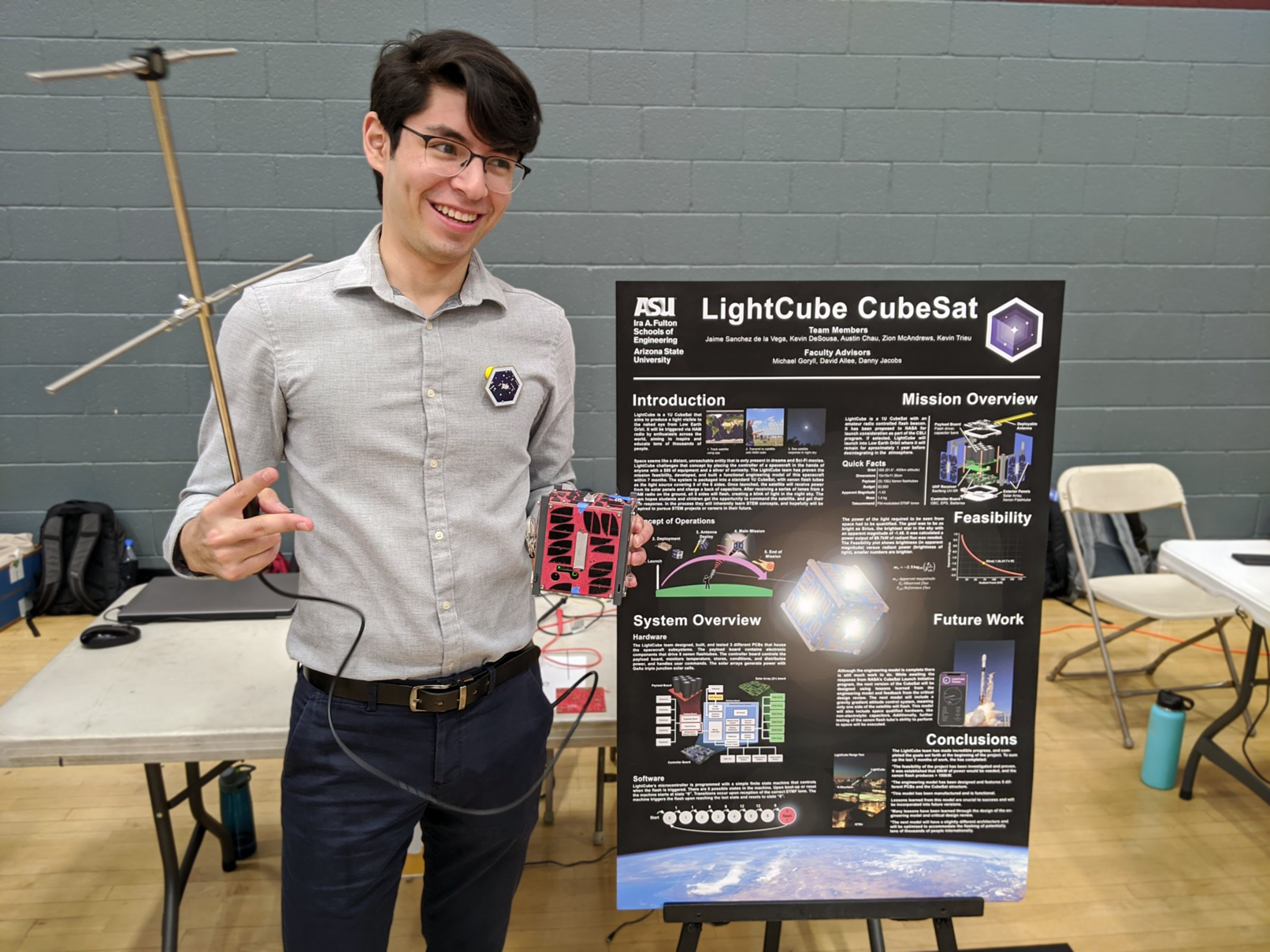 LightCube Principal Investigator Jaime Sanchez de la Vega with an early prototype of LightCube and a handheld radio and antenna that can be used to communicate with the spacecraft.

LightCube will launch aboard a planned spaceflight mission led by NASA, another U.S. government agency or commercial organizations with coordination from NASA’s Launch Services Program. After launch, LightCube will deploy into orbit from the International Space Station.

“The CubeSat Launch Initiative enables incredible opportunities for CubeSat developers from diverse institutions including universities, high schools and nonprofit organizations,” said Sam Fonder of the Launch Services Office, in the NASA release about the selection of projects funded for launch. “These innovative partnerships benefit both NASA and the greater science community by helping to bridge gaps in knowledge and, ultimately, accelerate technology.”

The LightCube team is currently developing flight versions of the custom hardware in preparation for a full system integration and test campaign starting later this year. The current plan is to deliver the spacecraft to NASA for launch no earlier than September 2022. To learn more about this mission and keep up to date on the latest development, visit lightcube.space. The flash of the xenon tubes seen from "A" Mountain (background) from the ISTB4 building on the Tempe campus during a testing of the flash operations. In the foreground, the ham radio antenna used to transmit the signal is visible in relief. Credit: ASU

ASU defeated SIU, 7-4, on Thursday night in the first game of the Tempe Regional. ... ASU defeated SIU, 7-4, on Thursday night in the first game of the Tempe Regional.