ASU chemistry and biochemistry alumnus Spencer Silver died May 8 at age 80. Silver was a research organic and polymer chemist at the 3M corporation who invented the adhesive used in Post-it Notes.

At 3M, Silver explored how polymer properties responded to small changes in composition and discovered a new acrylate copolymer that could be emulsified into microspheres. This novel formulation was found to have a unique microscopic architecture and to be a weak pressure sensitive adhesive that caused a substance to stick only slightly to surfaces. 3M chemical engineer and colleague Art Fry came up with a practical use for this new adhesive: Post-it Notes. 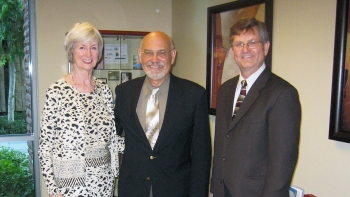 Spencer Silver (center) with his wife, Linda, and then-chair of the Department of Chemistry and Biochemistry William Petuskey, celebrating Silver's The College of Liberal Arts and Sciences Hall of Fame Award in 2009. Photo by Mary Zhu Download Full Image

Silver earned a bachelor's degree in chemistry from ASU in 1962 and a doctorate in 1966 from the University of Colorado. He worked at 3M for more than 30 years, retiring in 1996 with more than two dozen patents to his credit. Silver published in numerous and varied professional and peer-reviewed journals, was interviewed on NPR and was profiled in many articles. In 1995 he was invited to the White House to receive the National Medal of Technology Award.

In later years, Silver turned his creative energy to art and was an accomplished painter in pastels and oils.

"My desire is to find an artistic bridge between the practical and theoretical aspects of chemistry and the allegorical and fantasy world of images from plants and landscape," he wrote on his website.

With a laboratory that turned into a studio, Silver said of his art, "You will see lots of trees, leaves, flowers and whirly things with dots and dashes that try to deal with chemistry in a nondeterministic way."

In 2004, Silver was selected to the University of Colorado Heritage Center's Hall of Excellence. He also is the 1998 recipient of the Award for Creative Invention from the American Chemical Society, which is given to an inventor for the successful application of research in chemistry or chemical engineering that contributes to the material prosperity and happiness of people.

In 2009 Silver was honored with The College of Liberal Arts and Sciences Hall of Fame Award. Upon accepting the award, Silver reminisced about memorable times when he worked in the laboratory of Duane Brown (professor of chemistry at ASU from 1951–83), performing various analyses on germanium, gallium and gold. He also said that attending ASU in the '60s was "like going to school in a construction zone," and he's "glad to see that nothing's changed!"

First-year Sun Devil and conference discus champion went undefeated in the discus, finished top-2 in the shot at almost every meet, and has her name etched into both all-time top-10 lists. ... First-year Sun Devil and conference discus champion went undefeated in the discus, finished top-2 in the shot at almost every meet, and has her name etched into both all-time top-10 lists.