It could be the ear-to-ear smile, the jokes about loving long walks on the beach or the time he spends volunteering at a hospice so patients have someone to talk to.

Arizona State University second-year student Samuel Perez immediately charms and disarms. He has a bright future ahead of him as he pursues his biomedical sciences degree as a first step to becoming a physician. So it can be difficult to fathom that his path wasn’t always so certain. 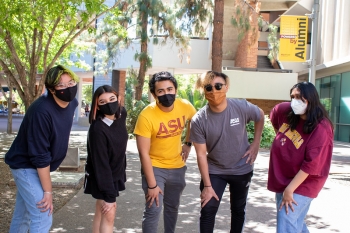 When Perez was in high school in Chandler, Arizona, he and his siblings were separated and placed into the foster care system. The leaders of his group home emphasized academics as a key to success, so he threw himself into schoolwork in hopes of being the first person in his family to go to college.

“I always knew I wanted to go to college. … I kind of knew the importance of academics. When I was in a group home, they kind of stress, the people watching us, academics is important,” Perez said. “It's a way to rise above what you've been raised in, to succeed on your own terms and build yourself up. And that kind of inspired me to hit the books.”

He found financial and other resources for foster youth on ASU’s website and recently joined the First Star ASU Academy as a youth coach. First Star is a free, four-year program that supports foster youth in Arizona through academic support, enrichment and resources necessary to enroll and succeed in college.

Perez is now part of the Bridging Success program at ASU, through which he connected with other students who have experienced the foster care system. He said he’s excited to share what he’s learned with high schoolers and wishes he’d had a mentor when he was that age.

“Their high school journey, you know, it's a complex one,” he said. “I was kind of going through it, not by myself per se, but there was just a lack of resources. And I felt like, if I had First Star back in high school, things might have been a little different.”

An estimated 19,000 children are in the foster care system in Arizona. Research shows that, nationally, children in foster care are at high risk of dropping out of high school and are unlikely to attain a college degree. Every year, First Star at ASU serves a cohort of 40 high school students by making sure their basic needs are met and by offering caregiver engagement, tutoring, the opportunity to earn college credit, field trips, cultural events and a three-week residential college experience in the summer. Due to COVID-19, most of the activities have been virtual in the past year.

The program and its partners are celebrating National Foster Care Month, a time to raise awareness and appreciation for the people who are doing their part to enhance the lives of foster youth.

One of the current First Star participants, known as First Star scholars, is 10th grader Sammie Lopez of Chandler. She’s mulling over a career in herpetology (inspired by trips to the reptile store with her Dad) or in social work, because caring social workers made such a difference in her life.

“When I was in foster care, I had a social worker. And I had a therapist and I had a lot of people helping me. And I didn't really understand that before. I didn't know that there are people who can help you in those types of situations in those ways. And I really appreciated the support and help that I got … I had people who genuinely cared about me,” Lopez said. “I had some friends in foster care I noticed who didn't have that type of support … and in some ways I felt bad for them. I was like, I think everyone should have that support. And it's something that I'm really passionate about, and I want to be able to help others.”

A self-described extrovert, Lopez's favorite subjects are math and Spanish, and she loves making friends and playing volleyball with her siblings and uncle as well as being involved with the Gay-Straight Alliance at her school. She was proud to have joined First Star a bit earlier than typical, as an eighth grader, and she said it’s been a great opportunity for her.

“So far, it's been one of my best experiences,” Lopez said. “I find it better for me that I can make relationships with people who are older than me, and I'm better at mature conversations.”

Lopez said that the college readiness and community stand out to her.

“They help a lot with college readiness and life skills and things like that. And again, with just building connections, they help you learn about your passions,” she said.

One of the reasons why Lopez joined First Star was because she heard about it through her brother, Parker Lopez, who is an 11th grader and a First Star scholar.

Parker loves trying new things and experimenting with his look, including changing his hair color. He heard about First Star in eighth grade from a counselor and signed up after talking to his aunt about it.

“And although I am a very shy person, this was able to help me meet new people, get out of my comfort (zone) and be involved with different communities,” Parker said.

Parker loves studying English and film and loves writing, especially with fantasy and dystopian themes. He wants to go to college and values the community, life skills and college prep that he gets from First Star. He said he didn’t think college was an option before because of grades. He’s looking forward to being the first in his family to go to college.

“I want to go to college for sure. That is something that I thought was impossible a while ago. And now now that I'm so close to it, I have the urge to do it now. So that's exciting,” Parker said. “(First Star) kind of gave me that spark of like, I can actually be something if I really wanted to, if I was determined to, if I can try and be successful.”

He said First Star has made ASU a second home and that he deeply values the program for providing basic needs like clothes, school supplies and so much more.

“It means a lot to me honestly; it's something very important and I hold really dearly. It's like a second family in a sense. It helped me a lot with school and with motivation to go to college,” Parker said.

First Star Coordinator Paloma Delgado said the program is a holistic approach to supporting foster youth because it works with caregivers and makes sure students’ basic needs are taken care of in addition to the academic support.

“So that we can help them academically, their basic needs have to be met. So meaning they have somewhere to live, they have food on the table, someone is caring for them, all of those things,” Delgado said.

Applicants have to have an open case with the Arizona Department of Child Services to join — they have to be in a foster placement at the time. After they’re in the program, students will be able to continue to receive support whether they remain in foster care or if they get reunified with family or adopted.

Delgado said First Star is important because there’s a gap in services for older foster youth; most of the available programming is for younger kids. Offering a continuum of support is important, especially when kids may have been through a lot of transition.

“Many of our students who come to our program are in high need of academic support. Because they don't have a consistent placement sometimes. So when a student moves, from either a group home to a foster placement back to a group home, they also change schools. And so the many changes affect their academics,” Delgado said. “And there are also students who have a lot of trauma in their past experience. So we try and help the different factors that have affected the student's life and how it affects their academics.”

First Star’s programming hopes to improve the education attainment that comes along with some of these academic challenges. First Star ASU Academy is part of a national nonprofit network that serves youth in foster care as they pursue higher education. Nationally, more than 97% of First Star participants graduate from high school, compared with 50% of foster youth who don’t participate. More than 90% of First Star participants go on to some type of postsecondary education. Something that’s pivotal to Delgado is that students in First Star know they’re not alone and know they have the tools to be successful.

“I think there's some misconceptions that youth who have experienced foster care ... that their trauma is for some reason a limit for them to be successful, which is not true. Many students have been through very difficult situations, through trauma at a very young age, and they're very, very resilient,” Delgado said. “In fact, it's actually their resiliency that is going to make them successful.”

Luckily, the current First Star cohort has Sun Devils such as Perez to look up to as a beacon of success. Inspired by seeing doctors work on his younger brother's broken arm as a kid, Perez is working overnights at Mercy Gilbert Hospital as a scribe when he’s not mentoring First Star students. He encourages other young people who have experienced the foster care system to look at the resources available and take advantage of them, because college, like so many other things, is what you make of it.

“Your past doesn't define you. And college is a way to forge your path to the future. It's a way for you to see all these new opportunities and to forge your own identity, forge your own path,” Perez said. "You may think it's impossible, but there are resources that are available to you if you go and find them.”